Probably, everyone who has visited the Transcaucasia at least once has heard of chacha - a strong alcoholic drink that locals revered as a drink of longevity and used as an aperitif before meals in small quantities. Traditional chacha it has a high strength from 50 to 70 degrees, but it is drunk quite easily and, as a rule, there are no consequences in the form of a headache from it. There are several analogues of this drink in the world: among the Italians - grappa, among the Slavic peoples - rakiya. But, for some reason, it is around chacha that the debate about what it should be prepared from: from the grapes and wine itself or from grape pomaceleft over after making the wine. The thing is that both methods are widespread. making chacha and, of course, in the Transcaucasia itself, where grapes grow in abundance, perhaps the traditional method of making chacha from the grapes itself remains. But, for example, in Russia, where grapes are a more valuable raw material, especially in areas north of Krasnodar Territory, grapes are usually allowed to make wine, and chacha is made from grape pomace.

The article will discuss both methods of making chacha at home. Moreover, experts believe that they do not differ much from each other in terms of the final product. The simplest recipe for making chacha is to use ready-made wine and distill it on a moonshine still. To do this, it is better to take still very young homemade wine, which has not been specially processed with anything. Store-bought wines are not the best choice in this situation, as they contain harmful impurities, such as sodium sulfate, used as a preservative, which impart an unpleasant odor to the finished product.

The distillation technology itself is not very complicated. First, you free the prepared wine from sediment, if any, and pour it into a cube for distillation. The first distillation is carried out without separation into fractions.

Advice! If you nevertheless decide to use store wines for distillation and an unpleasant smell appeared at the beginning of distillation, then the first 20 ml from each liter of used wine must be poured out. 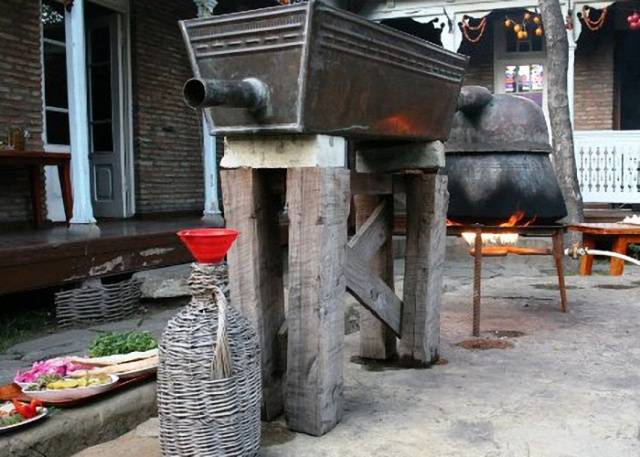 But finish the selection when the strength of the jet at the outlet starts to fall below 30-25 degrees. After adding water, bring the strength of the resulting drink to 20 degrees. Then, to preserve the aroma, do not use any additional purification methods, but simply distill the distillate a second time.

Re-distillation is one of the most effective ways to purify moonshine. After all, it makes it possible to remove most of the harmful water-soluble fractions. It is for these purposes that moonshine is diluted with water before the second distillation.

Advice! The use of a special thermometer in the moonshine still will help to facilitate the process of separating heads and tails. In this case, you only need to know that the boiling point of ethyl alcohol itself is 78.1 degrees. 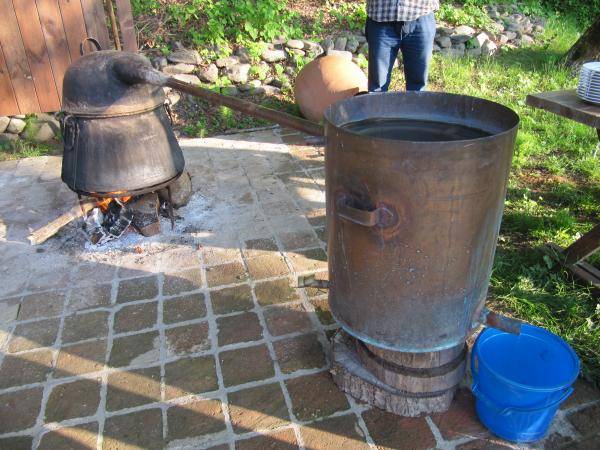 First, it is imperative to cut off the "heads" that contain the most harmful impurities for human health. As a rule, they constitute about 13-15% of the amount obtained after the first distillation of absolute alcohol. For example, from 3 liters of distillate with a strength of 43%, they will be approximately 0.19 liters.

Then collect the main fraction in a separate bowl until the strength of the jet at the outlet drops to 40 degrees. It is better to collect the remaining "tails" separately, since they can still be used for a new distillation, but they contain the substances from which the head splits in the morning.

The resulting chacha is best left to stand for a few more days before use. If you are interested in the yield of the finished product, then from 1 liter of wine with a strength of 14%, you can get about 200 - 220 ml of grape chacha at home. The process of making wine from grapes for chacha

If you have enough grapes, then the best option would be to make wine with your own hands, which you can then use to make chacha.

Advice! If for the preparation of chacha you use grapes ripened north of the latitude of the Krasnodar Territory, then sugar must be added, otherwise the yield of the finished product will be minimal.

According to the recipe, prepare 25 kg of grapes, 50 liters of water and 10 kg of sugar. The last ingredient is optional. But, when choosing whether to add sugar or not, consider the following calculations: The grape variety can be any, but the most affordable and suitable is Isabella, whose inimitable aroma cannot be confused with any other grape.

But you don't need to add yeast. The real Caucasian chacha is distinguished precisely by the fact that only wild yeast is used in its manufacture, which live in abundance on the berries themselves, if only they are not washed.

So, knead all the unwashed grapes with your hands. You can use a wooden pusher, but proceed with caution, as if the seeds are damaged, the drink may become bitter. Do not remove the scallops and twigs, because they are the secret behind the amazing aroma and unique taste of chacha. Then place the crushed grapes in a fermentation vessel, add water and sugar, stir. There must be about 15% of the empty space in the container for the release of foam and gases during fermentation. 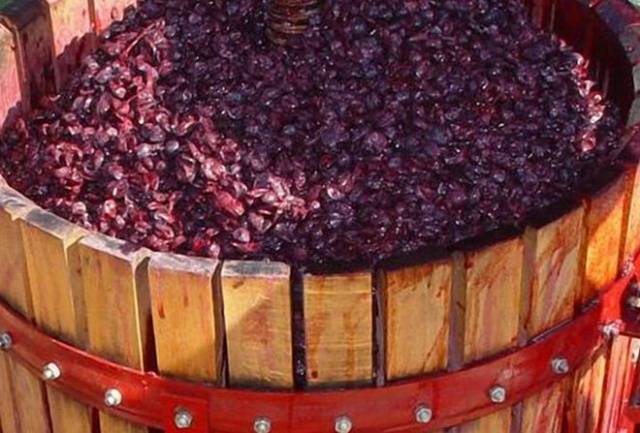 Place the container in a warm place with a temperature of + 22 ° + 28 ° C. A hat will appear on the surface of the wash from the first day from the pulp, which must be mixed with the rest of the liquid almost every day. This must be done to avoid souring and mildew. A water seal is placed on the container or a glove is put on. Fermentation with wild yeast lasts quite a long time - 40-60 days, sometimes up to 90. The signal for the end of the fermentation process is a fallen glove or the cessation of gurgling in the water seal.

Attention! You can taste the ready-made mash - it should be with a slight bitterness, but without the slightest sweetness.

The finished wash must be drained from the sediment and additionally filtered through several layers of gauze. But all the pulp left in the gauze is capable of giving chacha its extraordinary properties. There is one little trick to use these properties of the pulp.

Pour the strained mash into a moonshine still, and hang the remaining pulp directly in cheesecloth on top of the cube, so that all aromatic substances during evaporation and distillation can get directly into the distillate. In the future, the distillation technology is no different from that described above. According to this recipe, you can get a real Caucasian aromatic and healing chacha as a result.

For residents of central Russia, and even more so in the northern regions, making chacha from grapes or even wine will be an unaffordable luxury. Even if you have your own grapes growing on your site or there is an opportunity to buy a large amount of Isabella in the fall, then it is wiser to use her to make homemade wine.But the waste from the production of wine, that is, the very pomace, is quite suitable for obtaining fragrant homemade chacha. 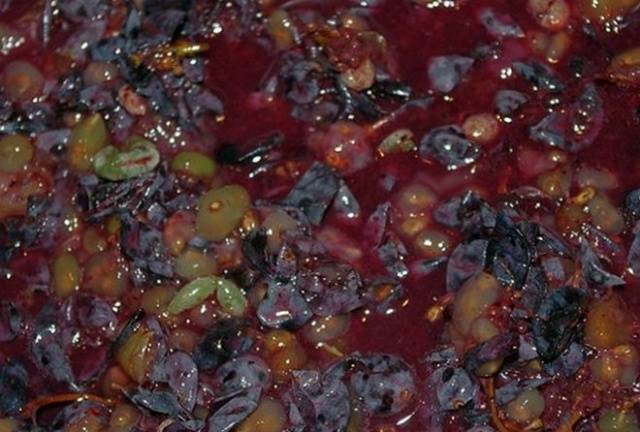 Attention! If you decide to make wine from white grapes, then according to the technology, juice is first squeezed out of it, and all the pomace is not used in the fermentation process, so they can be taken in smaller quantities than from black grapes.

So, according to the recipe you will need:

If you want to get the taste of a real Caucasian drink, it is not recommended to use additional yeast. But if it is more important for you to get chacha as quickly as possible, then 10 grams of dry yeast can be added to the recipe ingredients. 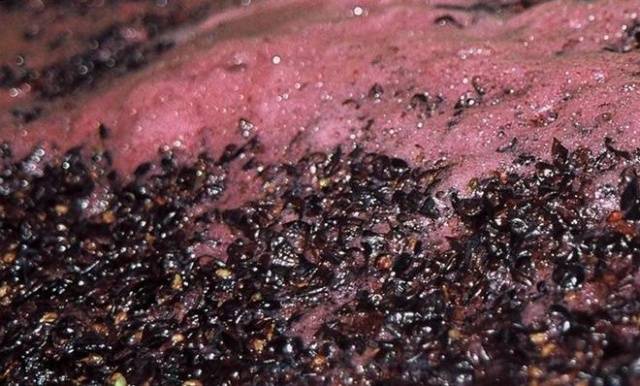 So, put the grape pomace into the fermentation tank, add water and sugar there and mix everything thoroughly with each other.

Important! The water temperature should not exceed + 30 ° С, otherwise the wild yeast on the grapes will die and the fermentation process will not start at all.

The container, as in the case of grapes, is placed in a warm place and after 18 hours, put a water seal or put on a glove on top. When wine yeast is added, the fermentation process will end quite quickly - after 8-10 days, the mash will be ready for distillation. Just remember to remove the lid every day during fermentation and stir the pulp with the rest of the liquid, otherwise mold may well appear.

The finished mash must be drained from the remainder and filtered before pouring into the moonshine cube. In the future, proceed exactly according to the above-described distillation technology. The finished chacha is usually allowed to brew for about a month before use. 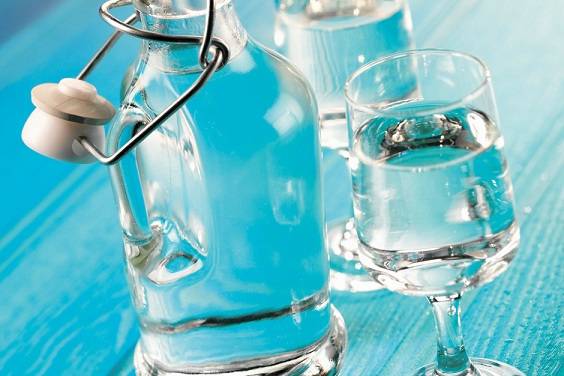 There is another popular way improve the taste of chacha... It is left in open bottles for 4-5 days. Its strength during this time drops by several degrees, but the smell of alcohol disappears, and the taste of chacha becomes softer.

The article revealed almost all the secrets and peculiarities of making a real Caucasian chacha. Therefore, even a beginner in moonshine will find it easy to understand all the nuances of this fascinating process and make a unique drink for yourself and your friends.