Tincture of pomegranate at home

Self-production of a variety of alcoholic beverages is becoming more and more popular every day. Pomegranate tincture allows you to combine the strength of alcohol and a subtle fruity note, giving the finished product an unforgettable taste and aroma. A variety of cooking recipes allows you to choose the best option that suits a person, taking into account his preferences and capabilities. 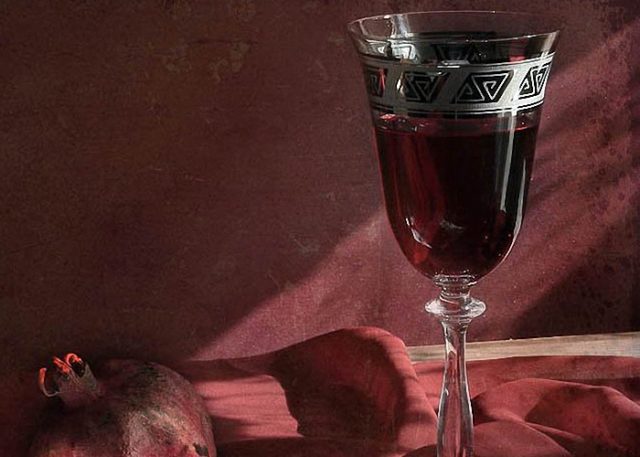 The benefits of pomegranate tinctures

Pomegranate has been known for its medicinal properties for centuries. It has been scientifically proven that it contains about 15 useful amino acids - of which 5 are vital for the body. The fruits contain a large amount of vitamins, including C, K, B6 and B9. In addition, the high content of elements such as phosphorus, copper and potassium is extremely beneficial for the proper functioning of many organs.

Important! The most useful for the body are juice, seeds and pomegranate peel. At the same time, the highest content of nutrients is contained in the colored part of the peel.

An important component of this fruit is the substance punicalagin. It has a beneficial effect on the heart muscle, as well as on the entire vascular system. Punicalagin helps reduce the risk of atherosclerotic plaque formation and normalizes total cholesterol levels.

A properly prepared drink can minimize the risk of cardiovascular disease, as well as reduce the likelihood of drops in blood pressure. It is believed that the tincture on the peel of pomegranate has anti-inflammatory properties, and is also able to actively fight parasites in the body. 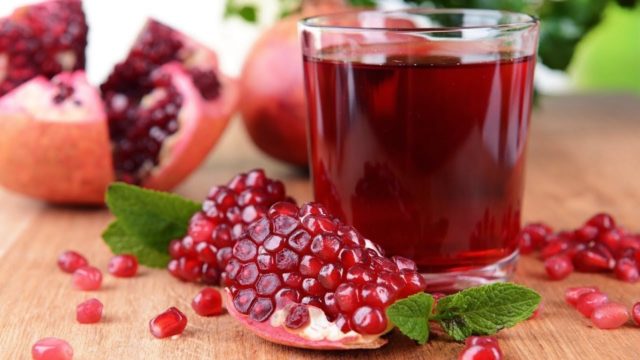 The drink became widespread as an assistant in the treatment of diseases of the oral cavity. The substances contained in pomegranate actively fight inflammation of the gums or mucous membranes. In addition, periodic intake of the drink improves the condition of the tooth enamel and reduces the chance of developing caries.

How to make pomegranate tincture

There is a legend that the pomegranate-based liqueur was widespread during the Soviet era among the most influential officials. The regular use of this drink allowed the secretaries general of the Soviet Union to maintain their health. For its deep burgundy color, it got the name "Kremlin stars". The recipe for the drink was kept in the strictest confidence by the chefs, but it will not be difficult to prepare such a tincture at home.

The main component of the drink is vodka. It is worth giving preference to the highest quality product that does not have an unpleasant fusel aroma. You can also use pure alcohol for cooking, diluted with spring water to 40-45 degrees. Fans of home brewing prefer to use their own distillate - such a product inspires confidence in the correct manufacturing technology.

Important! To add additional aromatic and flavor notes to the pomegranate tincture, you can use young cognac. The finished drink will have subtle notes of oak barrels.

Another essential ingredient is the pomegranate fruit itself.For tincture, you must choose ripe and juicy fruits. It is worth inspecting the fruit for signs of damage. Also, do not use pomegranates, which show even the smallest traces of mold - such fruits can spoil the taste of the finished drink.

How to make a tincture from pomegranate peels

Making a tincture on fruit peel allows you to transfer most of the nutrients contained in it to alcohol. The surface of the grenade must be flat, with no traces of visible damage. It is not allowed to use the fruit if one of its sides begins to deteriorate.

The pomegranate is cut into 4 parts, the grains are removed from it. Then it is important to get rid of the white films and the adjacent white part of the rind. Like the zest in an orange, in a pomegranate, the colored part is the most important part of the rind. To get 100 g of crusts, you need 4-5 medium-sized fruits. 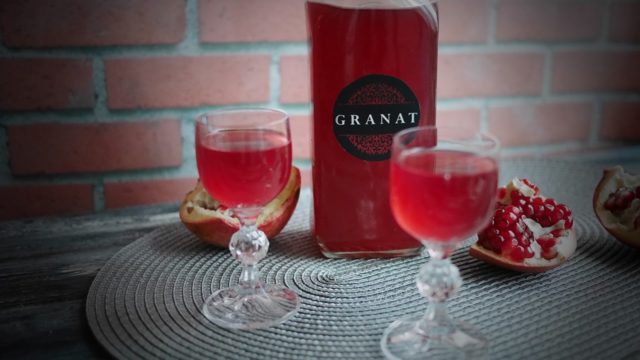 The crusts are poured with vodka in a ratio of 1:10. To add sweetness to the drink, add 300 g of sugar. If you wish, you can add a cinnamon stick to the tincture jar - it will give an additional aromatic note. The container with the tincture is tightly closed and sent to a dark place for a couple of months. After this period, the vodka on the pomegranate peel must be filtered and bottled.

How to make a tincture of pomegranate seeds

The more popular way to prepare tinctures is to use pomegranate seeds. In such cases, it is they who are poured with alcohol. Since the grains are rich in juice, the taste of the finished product will differ significantly from the option when the drink was prepared on crusts - the taste of the juice will mix with alcohol.

Important! For the preparation of tinctures on pomegranate seeds, less sugar is required, since it is contained in sufficient quantities in the fruits.

There are several ways to insist. In some cases, the grains cleared of films are poured into a jar and poured with vodka, in others, the grains require additional processing. Most often, processing means grinding the grains to get juice from them. You can use either a sharp knife or a large rolling pin. In this case, the tincture will also receive some of the taste from the seeds.

There are many options for making infusions using this fruit. Each person involved in the production of alcoholic beverages for personal needs has their own proven recipes for making pomegranate liqueur.

Depending on the end goal, the process of making a drink may differ slightly. Among the many recipes, it is customary to distinguish pomegranate liqueurs with vodka, alcohol and cognac. The vodka-based pomegranate liqueur is the most popular and easy to do at home.

This recipe is distinguished by a simple set of ingredients that can be easily found on the shelves of even small supermarkets. It is recommended to buy quality vodka in order to protect yourself from the possible negative consequences of alcohol consumption. To prepare a drink you will need:

Peel the fruit and remove the films between the grains. Discard greenish grains.

After a week, the resulting juice is drained, and vodka is added to the grains. Now the jar is closed with a tight lid and poisoned for a week in a dark place. Pomegranate vodka tincture prepared according to the recipe is bottled and sealed tightly. Subject to the proportions, the finished product is obtained with a strength of 14-15 degrees.

Alcohol is convenient in that it can be diluted to the desired degrees. In this way, you can adjust the final strength of the final product.To prepare the traditional version of the drink, you will need:

The fruits are cleaned and grains are extracted from them. After mixing with sugar, they are sent for a week of settling in a jar covered with gauze. After that, the excess juice is drained and the grains are poured with mixed alcohol and water in a 1: 1 ratio. Infusion is carried out for another 1-2 weeks, after which the finished pomegranate tincture on alcohol is poured into prepared bottles.

The infusion of drinks on cognac allows you to further embellish the taste of this noble drink. In combination with pomegranate, it acquires a light fruity aroma and pleasant sweetness. To prepare such a masterpiece you will need:

The fruits are peeled and grains are removed from them. With the help of a large knife, the grains are cut, promoting the active release of juice. The resulting juice is drained. Lemon zest is rubbed on a fine grater.

Cognac is poured into a large jar, chopped pomegranate grains, sugar, lemon zest and a cinnamon stick are added to it. Infusion is carried out for 2 weeks in a warm, dark place. Pomegranate cognac tincture must be filtered and then bottled.

The most popular method of using pomegranate tincture on vodka is direct use as an alcoholic beverage. Since the finished product turns out to be quite moderate in terms of strength, it can be used as an aperitif or as an addition to dessert - chocolate or fresh fruit.

Important! Don't use too much pomegranate tincture. Alcohol in large quantities is catastrophically harmful to the human body.

Pomegranate pouring with vodka can be used in the preparation of various cocktails. In addition, many culinary specialists use it instead of liqueurs for impregnating cake layers or as a filling for a variety of chocolate desserts.

An excellent option for using pomegranate liqueur with vodka is its occasional use before meals. Alcohol promotes better food digestion. In addition, pomegranate enhances appetite, which is especially beneficial for people who are underweight.

The tincture can be a great mouthwash. Its active components are excellent at fighting the manifestations of sore throat and stomatitis. Also, alcohol helps to destroy most of the harmful bacteria in the oral cavity.

It is believed that the tincture prepared with high-degree alcohol is excellent for use as compresses. An impregnated gauze bandage on the forehead will allow you to normalize your well-being and cope with the loss of strength. For colds, rubbing your back and chest helps clear phlegm in your lungs.

An additional effect from the use of pomegranate can be obtained by lubricating wounds and inflammations on the skin with tincture. Due to its antiseptic properties, the drink will allow high-quality disinfection of damaged areas of the skin.

Like any other alcoholic drink, pomegranate tincture is not recommended for pregnant women, minors and nursing mothers, as well as for people with diseases of the gastrointestinal tract. Alcohol aggravates gastritis and peptic ulcer disease, and also worsens intestinal permeability. It is also not recommended to use the tincture for people suffering from high and unstable blood pressure. 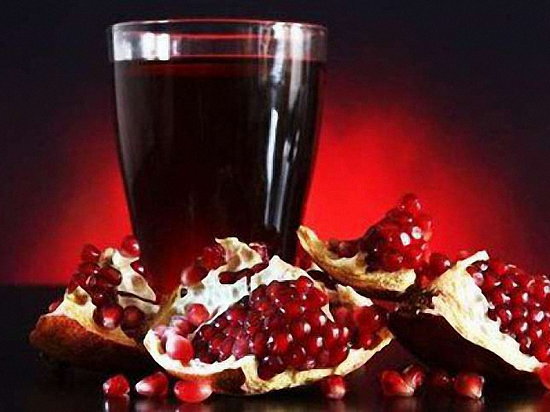 A person prone to allergic reactions should be treated with extreme caution when drinking a drink. In these people, pomegranate juice can cause skin rashes and difficulty breathing.

Alcohol and tinctures based on it are quite well susceptible to storage, so we can assume that the shelf life of the drink is practically unlimited.However, an important detail of the pomegranate tincture is that the fruity aroma and flavor diminish over time. After a year, the aroma of vodka will almost completely replace the pomegranate one, so it is advisable to use the finished product as early as possible from the moment of its preparation.

It is recommended to store the tincture in a cool, dark place. A basement, garage or unheated room is best suited for such purposes. Bottles should be tightly sealed to avoid the entry of harmful bacteria that can convert alcohol to vinegar.

Pomegranate tincture is an excellent example of making a delicious homemade alcoholic drink. Thanks to its indescribable color and distinctive taste, it wins more and more hearts every year, and its beneficial properties help people in the fight against a huge number of diseases.