A common shrub plant such as the gooseberry has its own admirers. Many people love its fruits because of its pleasant taste with sourness, while others love its abundant fruiting, which allows them to make many sweet preparations for the winter. One of these blanks is jam, which has long been called "royal". Gooseberry jam allows you to preserve notes of summer mood for the winter, moreover, it is also an excellent filling for homemade baked goods. 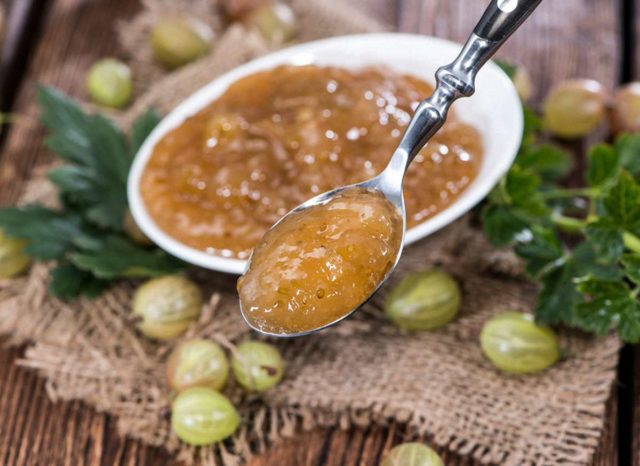 There are no special secrets for making gooseberry jam, but there are some tips that will help make this delicacy even more delicious, aromatic and beautiful.

The most basic thing is the choice of the berry variety. Naturally, you can prepare blanks for the winter from the fruits of any kind of gooseberry, depending on taste preferences, but the most beautiful jam is obtained from red varieties.

Attention! Most of the pectin is contained in slightly unripe gooseberries, and if the berries are overripe, then to prepare the jam, you will need to add a special thickener (store pectin, gelatin or agar-agar).

Since jam is a dessert that contains no more than 25% liquid, then for its preparation you should take a container that is not too deep, but large in diameter. It is these containers that have a large area of ​​liquid evaporation, which makes it possible to achieve the desired consistency when cooking the berry mass. Also, when choosing a container, you should exclude aluminum dishes, since when in contact with organic acids that are present in gooseberries, this metal can release harmful substances.

Before boiling gooseberry jam, it is imperative to remove the stalks from the berries. The easiest way to do this is with scissors.

Since gooseberry fruits contain rather small but tangible seeds, they will not have the best effect on the consistency of the dessert. You can get rid of them if you wish. There are 2 ways to do this:

The amount of sugar in recipes is usually indicated with the expectation that the berry has a medium degree of acidity, so the amount can be changed to your liking.

Important! The minimum amount of sugar for making gooseberry jam for the winter should not be less than 600 g per 1 kg of berries, otherwise it will only be necessary to store the dessert in the refrigerator.

For long-term storage, the sweet workpiece must be distributed in sterilized jars with roll-up metal lids, which also need to be boiled.

What berries and fruits can gooseberries be combined with?

Jam made only from gooseberries does not have a particularly pronounced taste, and is also slightly attractive in terms of appearance and aroma, especially if a green variety was used. Therefore, such a dessert is often prepared with the addition of other berries, fruits and even vegetables. Also, spices and other flavoring additives are added to improve the taste and aroma. 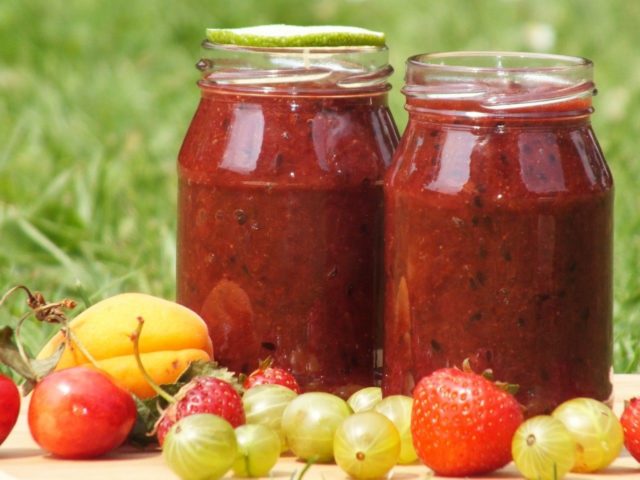 There are no special restrictions in supplements. Gooseberries go well with both sweet and sour berries and fruits. Usually, when adding additional ingredients, they completely rely on taste preferences. For example, in order to give a more interesting shade and slightly acidify the jam, it is recommended to add red currants to it. Also, for lovers of desserts with sourness, you can use lemon juice or even lemon slices as an additive. A citrus note can also be obtained by adding orange slices to the jam.

The simplest jam, which will require the minimum amount of ingredients, is cooked according to the classic recipe. To prepare it you will need:

A simple gooseberry jam recipe for the winter

A simple recipe, unlike the classic one, does not imply chopping the fruit after cooking, which greatly simplifies the process of making sweets.

Advice! Readiness can be checked as follows: dip the spoon in syrup, then put it in the freezer, wait 2 minutes. After that, hold your finger on the spoon, if the syrup is wrinkled, then the jam is ready. 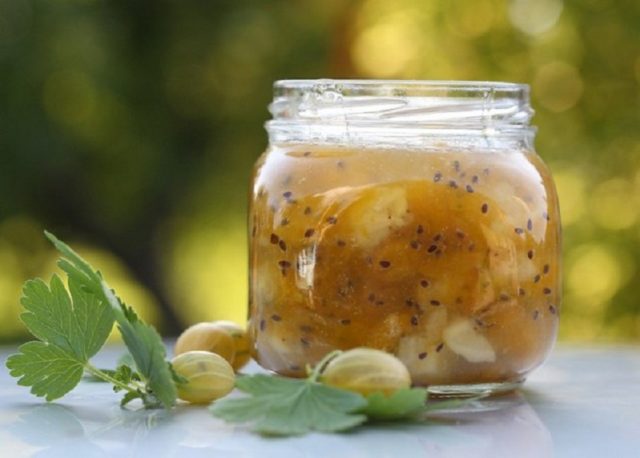 If the gooseberry fruits were not harvested in time, and they are overripe, then you can cook jam with such berries by adding gelatin.

Grated gooseberry jam for the winter

The grated jam is prepared in almost the same way as the classic version, the only difference is that the semi-finished berry mass is ground through a sieve, simultaneously removing the seeds, and not just crushed.

Attention! This amount of ingredients is calculated for 1 liter of finished product. 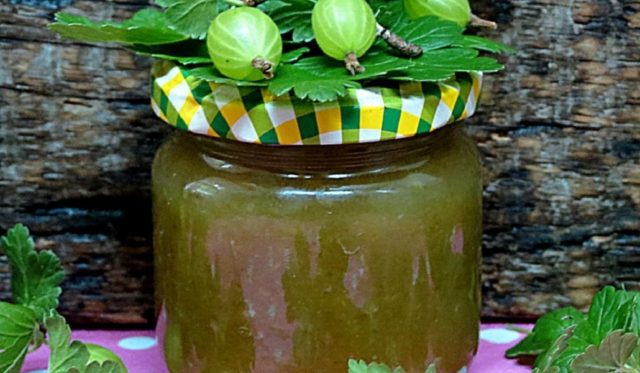 Emerald gooseberry jam with kiwi looks very beautiful, has a pleasant aroma, and is also rich in vitamins that are necessary in the cold season.

Adding orange to gooseberry jam will give the sweet preparation a citrus flavor and flavor.

Attention! Instead of an orange, you can use grapefruit, you get an equally delicious dessert with a citrus tint.

Lovers of sourness, as well as those who prefer the most vitamin-rich treats, will certainly appreciate the recipe for gooseberry jam with lemon, which is rich in vitamin C.

An apple-gooseberry jam is very tender and pleasant to the taste, for the preparation of which you will need: 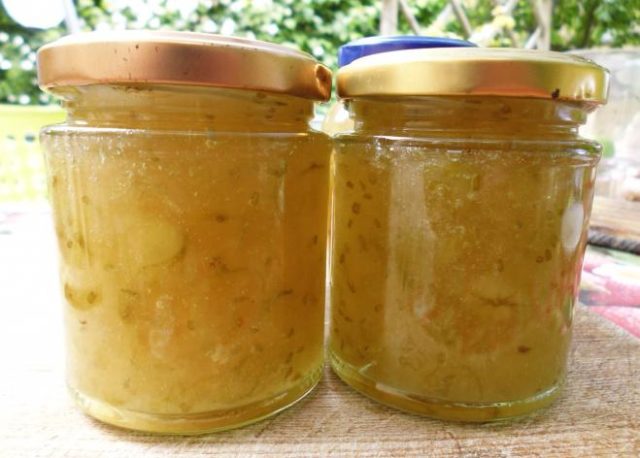 Gooseberry jam with red currants, the method of preparation is similar to the option where apples are added. Only in this case, both ingredients are crushed to a puree mass.

Mint is able to give a pleasant aroma and flavor to an ordinary winter, sweet preparation, so its addition to gooseberry jam makes it special.

For cooking you will need:

How to cook gooseberry jam in a slow cooker

To make gooseberry jam in a slow cooker, you can use any recipe, but the most delicious is the option with lemon zest and cinnamon.

You can store gooseberry jam if all requirements are met during its preparation, as well as in a hermetically sealed container, for up to 2 years. The storage area should be dark, cool and dry. Storage in a cellar or basement is ideal. An open treat is stored in the refrigerator for no more than a month.

Gooseberry jam is a very tasty and healthy winter preparation. It is not in vain called "royal", because it is a real sweet and useful medicine for the body in the cold season.