Kombucha does not float (does not rise): reasons for what to do

In America, kombucha, or jellyfish, is hugely popular, and a drink called kombuchei tastes like kvass and is sold in every supermarket. Russians and residents of the near abroad prefer not to pay money for something that is easy to cook on their own. But the strange gelatinous mass, which gives a tasty healthy drink, requires care and sometimes behaves incomprehensibly. Why the kombucha drowned, whether something needs to be done, and in general, is it normal or not, it's easy to figure out. 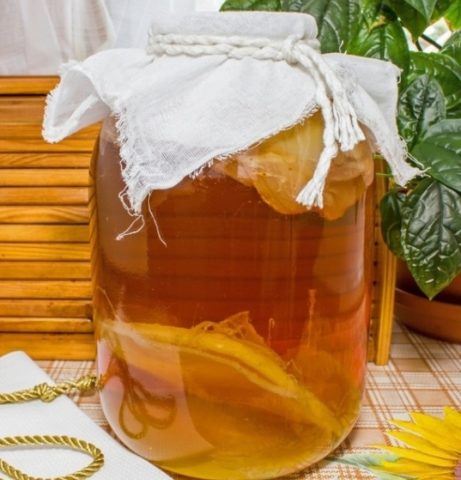 Why Kombucha doesn't pop up after separation

It is normal for the kombucha to sink to the bottom of the jar after dividing. This is a living organism, when one or more plates are torn off, it gets injured and must recover.

How long it takes for a kombucha to rise to the top depends on several factors. The main body of the medusomycete, after successful division, when it enters the usual nutrient medium from water, tea leaves and sugar, may not drown at all. It is considered normal if it lies on the bottom of the can for up to three hours.

Kombucha does not float for a long time after separation, if two or more plates were taken, or the operation was performed inaccurately. This is a significant injury and can remain at the bottom for up to three days. Medusomycete is sick, there is nothing good in this, but it's too early to sound the alarm.

A young thin plate and should not float immediately. It will start to work when it gets stronger, in the lower part there will be shoots that process the nutrient solution into kombucha. Before that, the kombucha lies at the bottom of the jar. For successful adaptation, the amount of fluid should be kept to a minimum.

The time when you should pay attention to the symbiont of yeast fungus and acetic acid bacteria, which does not want to float from the bottom of the jar, directly depends on the method of division and the thickness of the body of the medusomycete:

Important! If you immediately pour 2 liters of nutrient solution into a jar with a separated top plate, it is unlikely to float up at all. If the situation is not corrected, he will fall ill and die.

Kombucha sinking and sinking to the bottom of the can during kombucha preparation should not be alarming in itself. It's another matter if it doesn't pop up for a long time. A mature jellyfish, consisting of several plates, should rise in 2-3 hours. Subject to all the rules, using high-quality tea leaves and water, it may not sink at all.

Advice! If an adult kombucha sinks for 1-2 days every time at the beginning of cooking, then floats up and starts working, the owners should reconsider their actions.

They are doing something wrong, which is why the jellyfish gets a shock, is forced to spend time on adaptation. 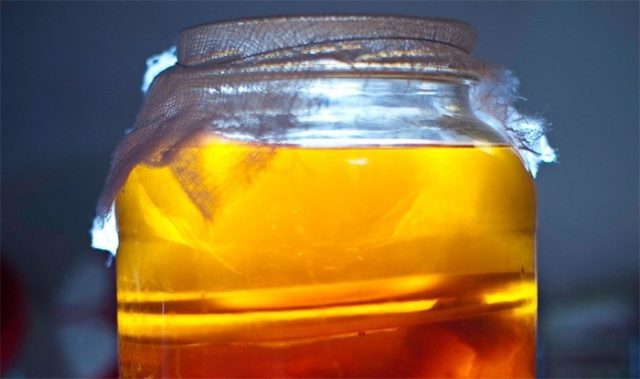 Any irregularities in the "work" of kombucha require careful study, possibly, the medusomycete is sick

Violation of the indoor climate

Kombucha should not stand in the sun. But it is also impossible to deny access to light. If you put a jar of jellyfish in a dark place, it will first sink to the bottom, since the yeast bacteria will stop working, then it will get sick and die. This will not happen immediately, there will be enough time to correct the situation.

The optimum temperature for keeping the medusomycete is 23-25 ​​° C, already at 17 ° C the gelatinous substance can die. If it gets cold, it will definitely sink to the bottom of the can.

Important! The temperature regime must be checked first.

Violation of the rules of care

Kombucha does not float in the jar because it is sick. Sometimes everything goes away on its own after a few days of adaptation, but this delays the preparation time of kombucha. The body of the symbiont is lifted up by bubbles of carbon dioxide released by yeast during fermentation. Medusomycete does not work while lying on the bottom.

He can get stressed for the following reasons:

Kombucha does not rise if violations are committed during the preparation of the drink. The most common:

Reasons why kombucha stands upright in a jar

Sometimes the medusomycete stands on the edge. There may be several reasons:

Comment! The vertical position taken by the medusomycete for a short time in the process of lifting from the bottom should not cause alarm.

If a kombucha stands on an edge, this does not always mean its illness.

What to do if the kombucha has gone down and is not going to pop up after correcting errors depends on how long it has been in this state. Usually he needs help.

In a young medusomycete, first of all, the volume of fluid is reduced. If sugar has been added less than 150 g per liter, add syrup.

Check the conditions of keeping an adult kombucha. When the temperature and lighting meet the body's requirements:

If the medusomycete still does not float, some of the liquid is drained. Even after illness, the mushroom should rise in a maximum of 1-2 weeks. Then it is placed in the usual volume of nutrient solution.

How to care for kombucha to keep it from sinking

In order not to look for the reasons why the kombucha drowned, you need to properly care for it. Firstly:

If a kombucha drowned, before sounding the alarm, you need to understand the reasons. Sometimes it does not immediately pop up due to the fact that the jellyfish is too thin, or there are unwanted impurities in the water. Even when a fungus is sick, it can be cured if the conditions are optimal.

Recommended entries
Benefits of Kombucha for Diabetes
Mushroom tea kvass at home: benefits and harms, recipes
Kombucha for weight loss: reviews of doctors and losing weight, effectiveness, recipes
Kombucha with pancreatitis: is it possible to take, how to drink correctly
Is it possible to drink kombucha for pregnant and lactating mothers: benefits and harms, reviews
Red currant juice: recipes, benefits
Blackcurrant juice: recipes for the winter
Water with honey and lemon on an empty stomach: benefits and harms
Lime and mint drink: homemade lemonade recipes
Comments (1)
Give feedback Cancel reply
Lunar
calendar 2021
January February March April May June July August September October November December
Recommended entries
How to brew kombucha for 3 liters: recipes for preparing a solution, proportions
Does kombucha contain alcohol: is it safe to drink while driving, when coded for alcoholism
Where does the kombucha come from: how it appeared, where it grows in nature
Can kombucha be stored in the refrigerator: terms and rules of storage