How to prune a tree hydrangea in the fall: diagrams and video

Pruning hydrangea trees in the fall is done more often than in the spring. A garden plant responds better to an autumn haircut, but for a successful procedure, you need to know its rules.

Do I need to cut the tree hydrangea for the winter

Garden hydrangea is allowed to be pruned in both spring and autumn. In this regard, gardeners have a question whether the plant needs an autumn haircut, or if it only injures the culture before the onset of cold weather.

Pruning hydrangeas in the fall is really necessary. The procedure protects the tree shrub from damage. If pruning in the fall is neglected, branches can break under the snow. 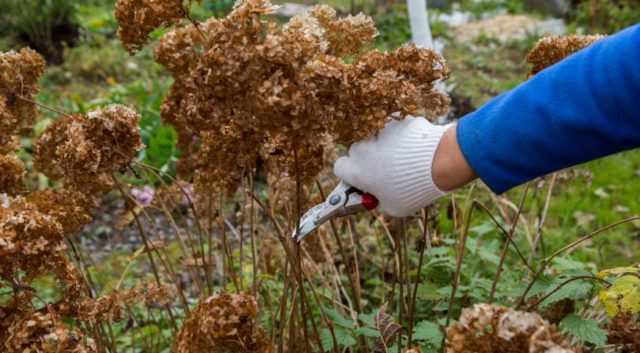 An autumn haircut is less traumatic than a spring one

In addition, when pruning in the spring, the risks for the shrub are much higher, if you miss the deadline and start cutting after the plant starts to grow, the cuts will leak out with juice. This will weaken the plant and, at best, affect its flowering, and at worst, lead to the death of the culture.

Why do you need pruning a tree hydrangea for the winter

It is imperative to prune garden shrubs. A haircut helps to preserve decorativeness, strengthens the health of a tree-like shrub, and improves flowering.

There are several important advantages to performing the procedure in the fall. 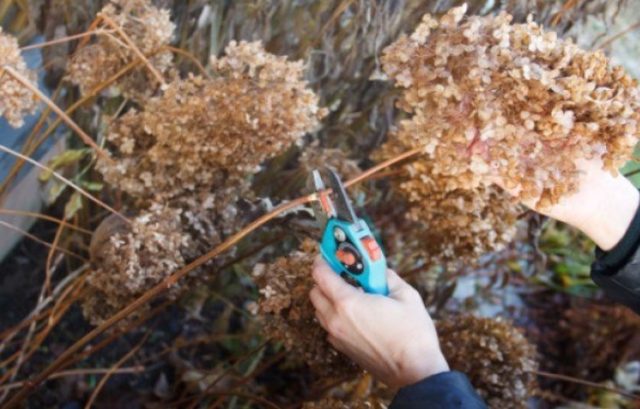 In the autumn, hydrangea stops growing and does not run out of juice after pruning.

A garden crop cut in the fall is easier to cover before winter comes. This applies to both old and young plants, the less branches a shrub has, the easier it is to wrap it up with insulating material.

The most important advantage of autumn pruning is that after it, the cuts on the branches of the tree plant do not start to sap. But during the spring growing season, this happens very often, and as a result, the shrub receives severe damage after a useful procedure.

When can you prune a hydrangea tree for the winter

Shrub pruning is done quite late in the fall. In the Moscow region, it is recommended to start cutting hydrangeas before winter in the second half of October or even later, in early November. 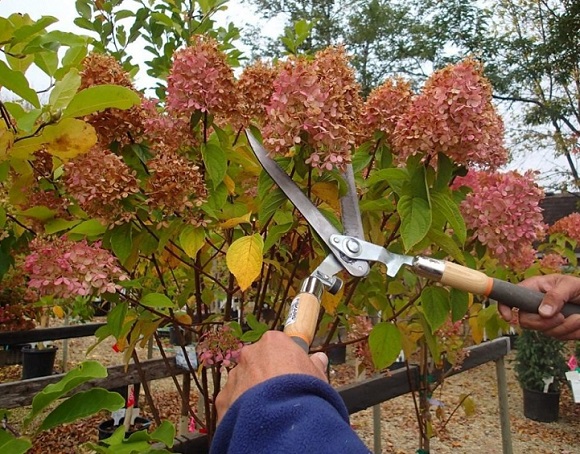 Pruning is done late, after the first frost

In general, regardless of the region, you should be guided by the weather. Ideally, you need to wait for the first frost and even snow.After that, the plant will finally shed its leaves, and only dried inflorescences will remain on it. The movement of juices under the bark of the plant at this time will definitely stop, and besides, it will be easier for the gardener to understand which branches are suitable for pruning.

Pruning earlier in the fall usually does not harm tree hydrangea. However, the procedure has its drawback. If you cut a garden shrub while foliage and live inflorescences are preserved on it, the process of re-growth of lateral shoots may take place. This will weaken the plant before the cold weather and prevent it from retiring unhindered.

Attention! It should be borne in mind that in Siberia and the Urals, the first frosts come early. In these regions, you can mow the plant in the fall, without waiting for October, and even more so for November.

How to prune a hydrangea tree for the winter

For beginners, pruning a tree hydrangea in the fall is not difficult, it is a simple procedure. There are several schemes for pruning shrubs. Which one to apply depends mainly on the age of the culture.

For young hydrangea seedlings that have not yet reached 5 years old, it is not recommended to carry out strong pruning before wintering. Since the plant is in the development phase, the active removal of shoots can negatively affect its health and even lead to the death of the shrub.

Usually, in the first 3-4 years, only wilted inflorescences are removed from a tree plant. After the bush throws off the leaves, it is carefully examined and all dried buds are cut off with a sharp knife or pruner.

Also, during this period, you can carry out sanitary pruning, remove all broken and diseased branches. This procedure allows you to maintain the health of the culture, therefore it is recommended for hydrangeas of any age. 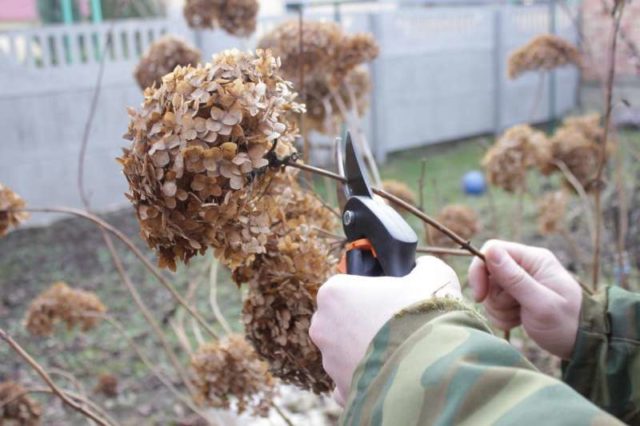 In young bushes, only faded buds are removed.

This method of cutting is used for adult shrubs of tree hydrangea that have already entered the time of maximum flowering. Since the inflorescences of the ornamental bush bloom only on annual branches, they can be completely removed in the fall after leaf fall.

In the video of trimming a tree hydrangea in the fall, it can be seen that on each of the main branches, when cutting for flowering, all shoots are cut off, with the exception of 2-4 well-developed paired buds. The branch itself is also shortened in length. As a result of this procedure, in the spring, the ornamental bush begins to actively develop new shoots, without spending energy on feeding extra branches. 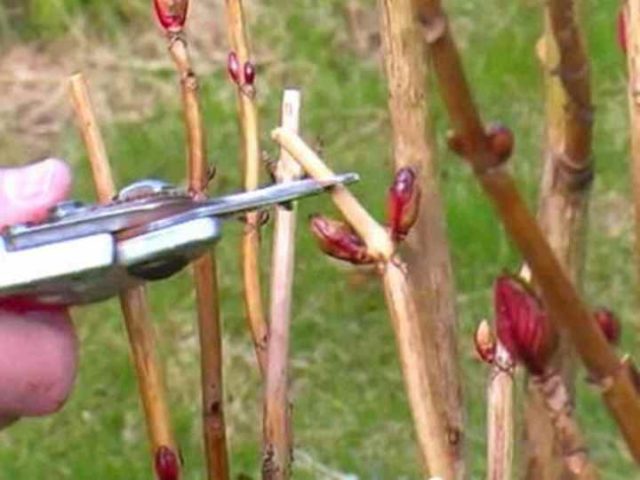 This haircut is practiced for tree-like shrubs over 5 years old. By the degree of intensity, light and cardinal anti-aging pruning can be distinguished.

When carrying out light rejuvenation, all branches older than 4 years are cut off from the hydrangea bush in the fall, flush with the trunk. Although old branches can still develop annual shoots, they are usually too thin and weak to produce lush flowering.

The scheme for pruning tree hydrangea in the fall for cardinal rejuvenation suggests cutting off all shoots, leaving only 10 cm from their length. If the roots have grown too much, this process can be extended over several seasons so as not to injure the plant. As a result, in 3-4 years the hydrangea will be able to completely rejuvenate, and splendor will return to its flowering. 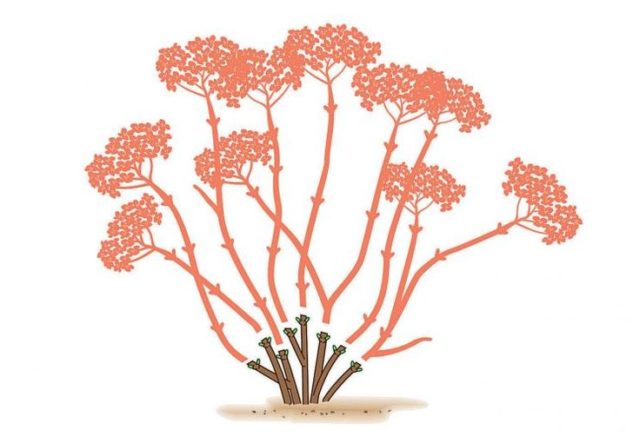 To rejuvenate the bush, you can completely cut off its branches up to 10 cm

On an annual basis, it is recommended to thin out the tree hydrangea and carry out a sanitary haircut. The procedure is as follows:

Different types of pruning in the fall can be combined with each other if necessary.In the fall, tree hydrangea reacts well even to very intense pruning. 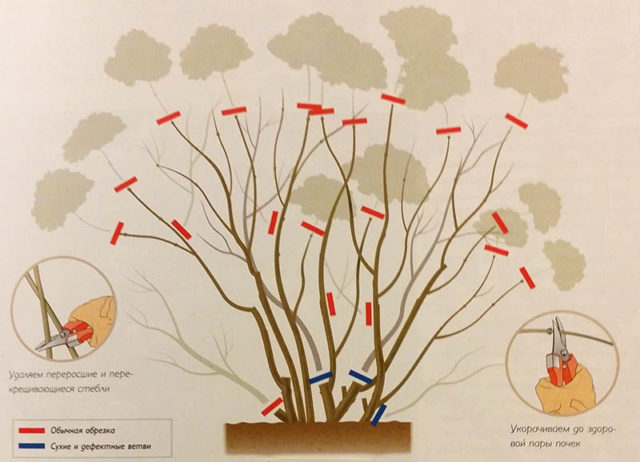 When thinning, it is necessary to remove defective shoots, regardless of their age.

Immediately after cutting the tree hydrangea, fresh sections of the plant must be processed. For this purpose, you can use crushed charcoal or activated carbon, Bordeaux liquid and even oil paint. Despite the fact that hydrangea tolerates pruning in autumn better than in spring, in the absence of processing at the cut sites, bacterial processes can still begin.

Also, after pruning, it is necessary to eliminate all remaining plant debris from the site. Foliage, dried inflorescences and cut shoots are carefully collected from the ground, and then carried away to a distant part of the garden and burned. It is impossible to leave garbage near the hydrangea, it is in the plant residues that insect larvae and fungal spores winter. 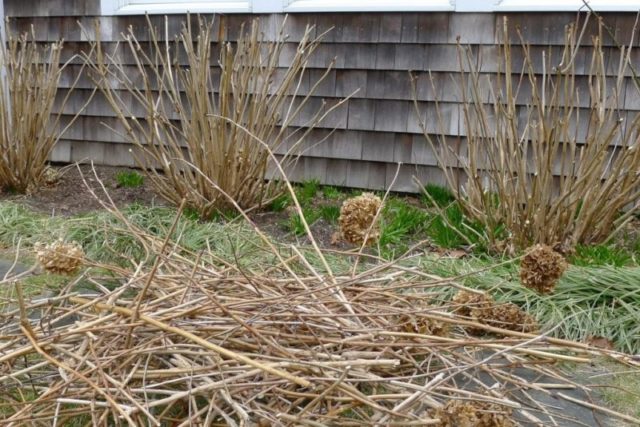 Since autumn pruning is performed at a later date, after it, the tree hydrangea can only be covered for the winter. The roots must be mulched with compost or peat with a layer of at least 10 cm, this will protect the root system from freezing. The above-ground part of the hydrangea is usually wrapped in non-woven material and additionally covered with spruce branches.

Advice! If the shrub is not tall, then you can build a frame around it and completely cover the hydrangea inside with fallen leaves.

Summer residents who have been growing tree hydrangea for several years are ready to share some useful tips on pruning.

Top dressing of garden shrubs is recommended not after, but before the autumn haircut, for 1.5 or 2 months. With late application of mineral fertilizers, the plant simply does not have time to assimilate nutrients before the onset of cold weather. Accordingly, the winter hardiness of the shrub will decrease. You need to feed the hydrangea in the fall with phosphorus and potassium, but nitrogen fertilizers cannot be applied, they stimulate the growth of green mass. 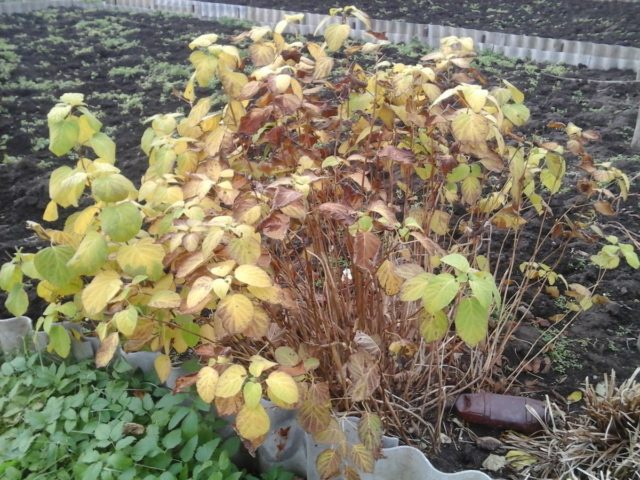 The last feeding is carried out a couple of months before pruning.

When growing a plant in warm regions, it is permissible to trim the branches of the tree hydrangea a little more than the schemes recommend. Since the winter is warm in the south, the plant will not be harmed or weakened by more vigorous pruning. But in the northern regions it is better to cut a little less than the recommended one, such a precaution will not hurt before a long and cold winter.

Important! After the autumn pruning, it is recommended not only to process the cuts, but also to carry out preventive spraying against diseases. A solution of Fundazol is well suited, the agent will prevent possible bacterial processes and protect the plant from infection with a fungus.

If the weather forecast still promises the onset of a thaw, then it is better to postpone the shelter of the plant for the winter. The shrub should be wrapped up with the onset of the final cold weather. At positive temperatures, the hydrangea will begin to overheat and rot under cover, and this will increase the likelihood of rotting at the cut sites. 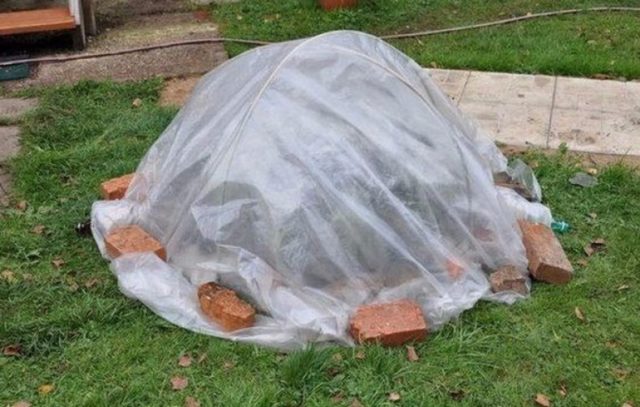 For the winter, it is better to cover the hydrangea bush entirely

Pruning your tree hydrangea in the fall is a beneficial procedure and is recommended annually. An autumn haircut is less traumatic for the garden shrub and only strengthens its endurance before the onset of winter.