Panicle hydrangeas are gaining popularity among gardeners around the world. The shrub is notable for its abundant and long flowering. Vanille Fraise is one of the most sought-after varieties. It is grown in warm regions, the middle lane and northern areas.


Hydrangea Vanille Fraise bred in Renault nursery in France. The work on the variety has been carried out since 1989. The goal of the breeders was to develop a new variety, in which, in a short time, the color of the petals changes from white to pink. As a result, plants with large inflorescences and numerous flowers were found.

The decisive selection of Vanille Fraise took place in 2003. The hydrangea got its name due to the complex color of the inflorescences: white and dark pink. "Fraise" is translated from French as "strawberry".

Panicle hydrangea Vanilla Freise is a powerful spreading shrub 1.5-2 m high. Its shoots are flexible, maroon color. The leaves are green, oval in shape, located along the entire length of the branches.

Flowering begins in June and lasts until October. The inflorescences are pyramidal, 30-35 cm long. At first, the petals are white, which turns pink by August. In September, the inflorescences acquire a burgundy red color.

Hydrangea Vanilla Fraze begins to bloom in the year of planting. The shrub is unpretentious, tolerates winter frosts down to -35 ° C.

Panicle varieties of hydrangeas are used to decorate garden plots, parks, recreation areas. The shrub is grown as a hedge, used in single plantings on lawns. After cutting, the inflorescences retain their freshness for a long time. 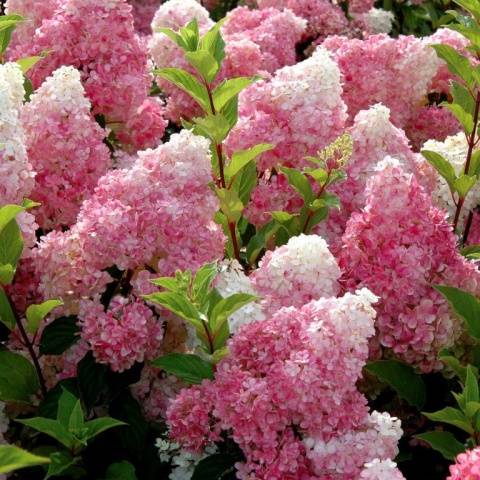 
For planting panicle hydrangea Vanilla Fraz prepare a suitable place. Be sure to take into account its illumination, the presence of protection from the wind, location relative to trees and other shrubs. Before planting, the soil is improved by introducing the necessary components.


The panicle hydrangea is planted in partial shade. In the middle lane and to the north, the shrub is located on the south side of the site. With constant exposure to the sun, the inflorescences will lose their decorative effect.

Hydrangea Vanilla Fraze should not be exposed to cold winds. Buildings, fences or trees can act as protection against wind loads.

In sandy soil, the shrub does not receive the required amount of nutrients. In order for the soil to retain moisture better, peat and humus are added to it.

Vanilla Freize prefers slightly acidic or neutral soil. Therefore, it is recommended to add coniferous litter to the substrate before planting. For the successful cultivation of hydrangeas, the use of lime, chalk, dolomite flour and ash should be completely abandoned.


The panicle hydrangea is planted in the spring before the start of sap flow. It is allowed to postpone work for the autumn period (September or October). The shrub must be planted after the fall of the leaves, until the frost begins.

Planting material is purchased in nurseries. Be sure to choose healthy seedlings without traces of damage and decay. The optimum height of the shoots is 30 cm. 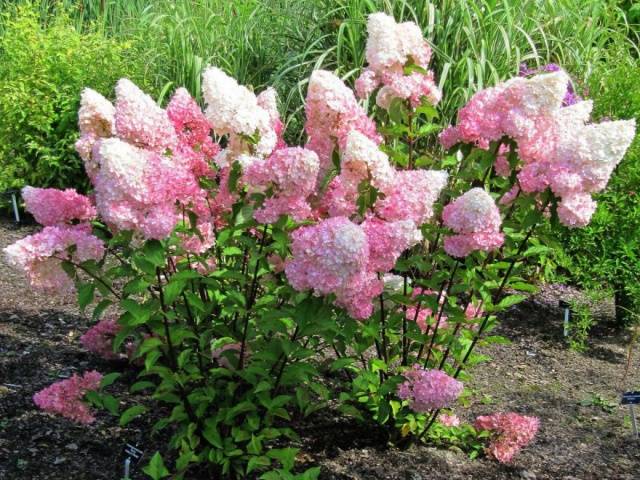 Young hydrangea bushes are regularly watered. To protect from the sun in the heat, a canopy is installed over them.


Regular care ensures the formation of lush inflorescences of the Vanilla Freise variety. The shrub is looked after by watering and feeding. Pruning the shoots helps to give the bush the desired shape. To protect against diseases and pests, special preparations or folk remedies are used.


Panicle hydrangea is moisture-loving, so watering is a mandatory step in caring for it. The soil under the bush is moistened every week, it is not allowed to dry out and form on the surface of the crust.

Important! Up to 10 liters of water are added under the panicle hydrangea bush Vanilla Fries.

Only warm, settled water is used for irrigation. In a drought, the shrub is watered more often, up to 2-3 times during the week.

The hydrangea root system is located close to the surface of the earth. Therefore, when watering, make sure that its roots are not exposed. After the introduction of moisture, the soil is loosened and the shrub is spud. Mulching the soil with peat or humus helps to reduce the number of watering.


For the formation of lush inflorescences of hydrangea Vanilla Fraz, nutrients are required. The shrub is fed with organics or mineral complexes. The best results are obtained by alternating different types of feeding.

Panicle hydrangea Vanilla Fries is fed in accordance with the scheme:

For the first feeding of the Vanilla Freise variety, an organic mullein-based fertilizer is prepared. Organic matter is mixed with water in a ratio of 1:15. The resulting solution is watered under the root of the bushes.

Summer treatments are performed using mineral complexes. The fertilizer is prepared independently by combining ammonium nitrate, superphosphate and potassium salt. Each substance is taken in an amount of 30 g, after which they are dissolved in water.

For hydrangea, ready-made mineral complexes have been developed in the form of dry granules and suspensions. This fertilizer must be dissolved in water, and then water the bushes under the root.

Autumn dressing of the Vanilla Freise variety is carried out using superphosphate and potassium sulfate. 30 g of each substance is added under each shrub. Fertilizers with nitrogen should be abandoned in autumn so as not to cause increased shoot growth.


By trimming the hydrangeas, Vanilla Frazes are given the necessary shape. The bushes are pruned in early spring before sap flow. Be sure to remove dry and broken branches.

Advice! Pruning shoots at the root helps to rejuvenate the old shrub. Branches with a length of no more than 10-15 cm are left above the surface.

In the summer, the Vanilla Frize hydrangea is not pruned. However, it is necessary to remove dry inflorescences, which leads to the formation of new buds. 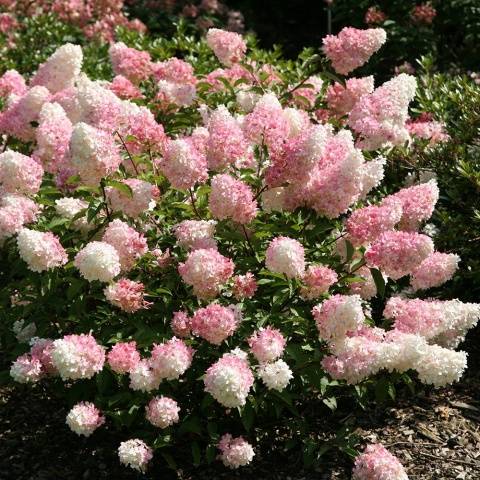 Protection against diseases and pests


Hydrangea Vanilla Fraze can be seriously affected by fungal diseases. In cold rainy weather, plants are susceptible to powdery mildew and various rot. The defeat covers the shoots and leaves of the bush.

With a lack of nutrients, the Vanilla Freise variety is prone to chlorosis. The disease is identified by yellow leaves that begin to curl and fall off. To combat the disease, the shrub is fed with a complex fertilizer containing iron.

Attention! Panicle hydrangea attracts pests: snails, aphids, spider mites. All of them feed on plant sap, as a result of which the leaves dry up and fall off, the development of the shrub slows down.

For insects, the shrub is sprayed with solutions using Tanrek or Akarin insecticides. For prevention, folk remedies are suitable: infusions on onion peels or garlic. They are used for processing at any stage of shrub development.

Shelter for the winter


Hydrangea Vanilla Fries endures harsh winters. When grown in the southern regions and the middle lane, the shrub is not covered.

In a cold, snowless winter, mulching the soil with peat or humus helps to protect the hydrangea from freezing. The thickness of the mulch is from 20 to 30 cm.

Young plants must be covered with agromaterial or burlap for the winter. When the snow falls, a snowdrift is thrown over the bushes for additional insulation. 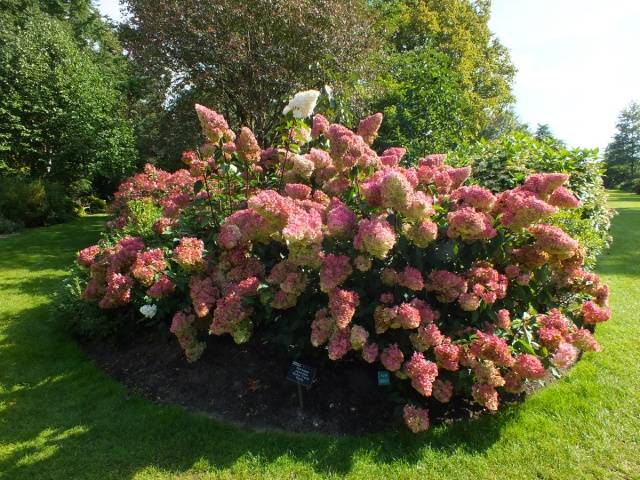 
If you have a Vanilla Freise hydrangea bush, you can get seedlings yourself. To do this, in the spring, several shoots with buds are cut off and immersed in a solution of the Kornerost stimulant. Then the cuttings are planted in the garden.

The plant is watered, fed with organic matter, protected from the hot sun. After rooting, the hydrangea is planted over the site.

Advice! When transplanting hydrangea Vanilla Freise, you can divide its rhizome into parts and get planting material.

Another effective way to propagate shrubs is to use layering. In the spring, the lower parts of the shoots are cleaned of leaves and fixed to the ground. Fertile soil is poured on top. By autumn, the plants will take root, and you can separate them from the bush.


Daria, 24 years old, Moscow suburbs
For planting in the country, I bought a hydrangea Vanilla Fraz. The shrub produces many pyramid-shaped inflorescences. The variety attracts with its unusual color scheme. The color scheme of the inflorescences changes from white to burgundy. Our bush is 2 years old, its height reaches 50 cm. 7-8 inflorescences bloom on it. Hydrangea endures the winter without shelter. I water the bush every week, in a drought - every other day. I additionally feed with potassium nitrate.
Tamara, 38 years old, Lipetsk
A neighbor advised me to grow a hydrangea a couple of years ago. The cattery liked the variety Vanilla Freyz very much. I dropped him off in a sunny place under the window. The shrub blooms for 2-3 months. The petals initially have a greenish tint, which changes to white and pink. The color saturation depends on the acidity of the soil. The plant is not afraid of spring frosts.
Natalia, 53 years old, Saratov
Hydrangea is one of the most beautiful shrubs on my site. Particularly pleasing with the beauty of flowering and unpretentiousness is the Vanilla Freise variety. For planting, I dug a hole, where I covered the forest soil from under the pine. Fertile soil was poured on top. With this method of planting, acidifiers can be dispensed with. 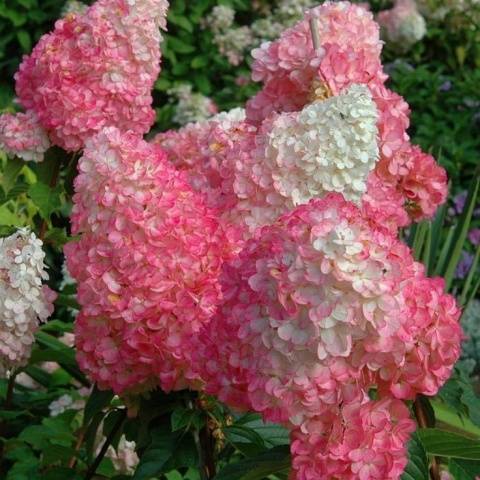 
Hydrangea Vanilla Freise is a shrub with excellent decorative properties. The plant requires watering and feeding. The shrub is pruned to give it the desired shape. Preventive treatments help protect plants from diseases and pests.