Flower lovers try to grow a variety of plants on their site. The attitude towards hydrangeas is not the same for everyone. Many are afraid that they will make mistakes when planting and leaving, and the bush will die. Although it is the Phantom hydrangea that will make your garden attractive, fill it with the scent of honey.

We will try to tell you about the Phantom paniculata variety and how to care for it. We hope that after reading this article, the number of fans of this amazing garden plant will increase. 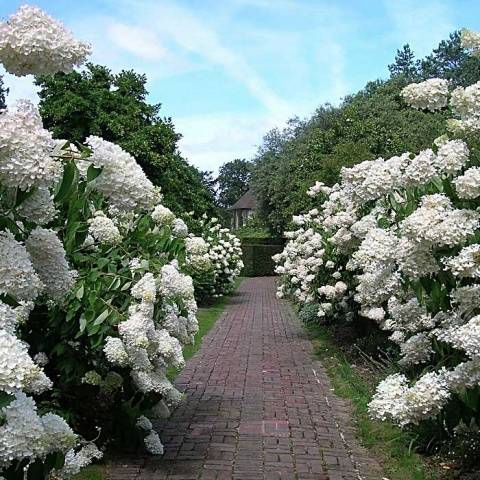 Japan, China, Korea and even Sakhalin - these are the places where hydrangea has been revered since ancient times. The flower became cultivated only in the sixties of the 18th century. During this time, breeders managed to obtain various varieties, including the Phantom tree hydrangea.

Modern varieties have a number of advantages over the wild representative: 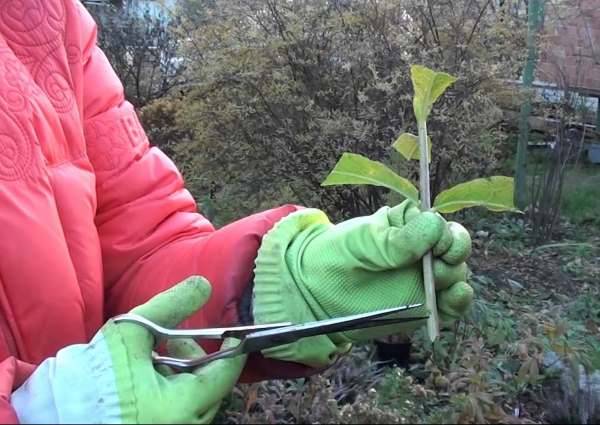 Important! If you decide to grow Phantom variety, choose a place where there is no sunshine and the wind.

All of the above listed main advantages also apply to the Phantom panicle hydrangea, according to gardeners' reviews, they are quite true. 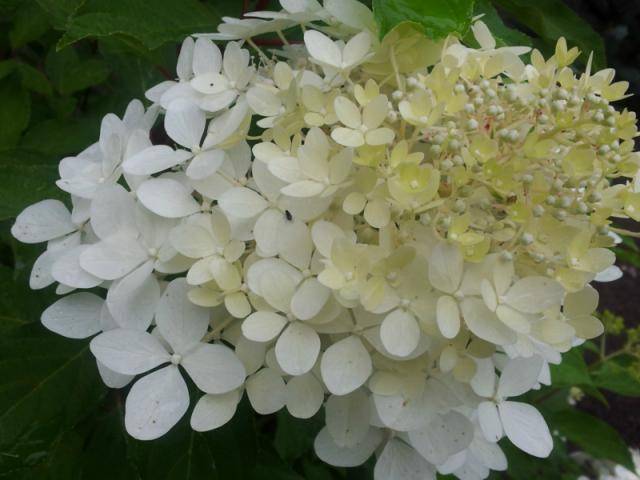 Hydrangea paniculata is a mother plant. The noble properties of the Paniculata hydrangea in the Phantom have been preserved by the breeders, but at the same time the plant's endurance and frost resistance have been improved. That is why, at present, hydrangea has become so popular that it began to be grown in regions with a harsh climate.

In harsh climatic conditions, gardeners prefer these types of hydrangeas:

Among the wide variety, there are deciduous and evergreen plants. The height of the bush can be from one to three meters. In the wild, Paniculata hydrangea reaches 7-8 meters. 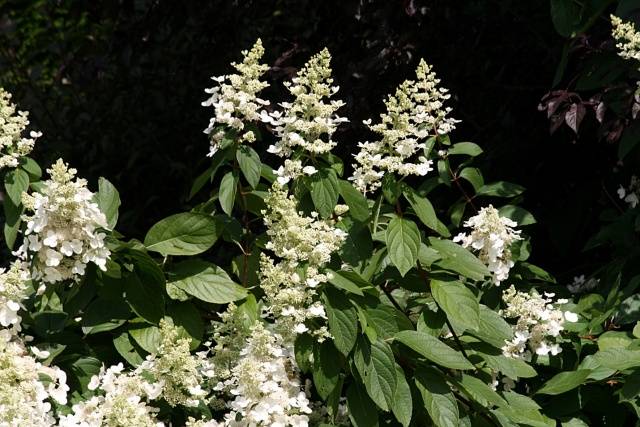 The Phantom tree hydrangea grows up to 3 meters in height. Its oval leaves are long, about 20 cm. Small flowers are collected in large lush inflorescences up to 25 cm long. The color range even within the same variety can be varied.

Treelike hydrangea blooms in early summer and continues throughout the warm season. Even in winter, plants leave with flowers. On the snow-white Phantom, by the end of the season, the petals acquire a delicate greenish tint.

Cut flowers do not fade for a long time. In addition, they retain their natural shape and color palette characteristic of the variety. It is for this that the hydrangea tree-like, including the Phantom variety, is highly valued by florists who create ikebana. 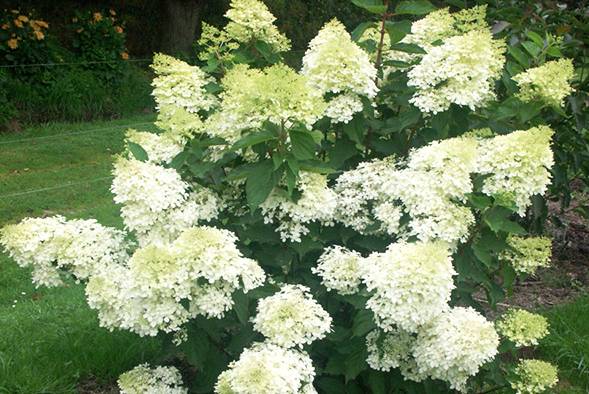 The Phantom tree hydrangea is difficult to grow, since its frost resistance is average.In order for the bush to bloom profusely, it is cut out at the root every spring. Pruning is usually done in early April. Bushes grow quickly on moist, fertile soils with little acidity.

Breeders have created a large number of varieties of panicle hydrangea. For example, in the photo below - Phantom hydrangea with pink flowers. 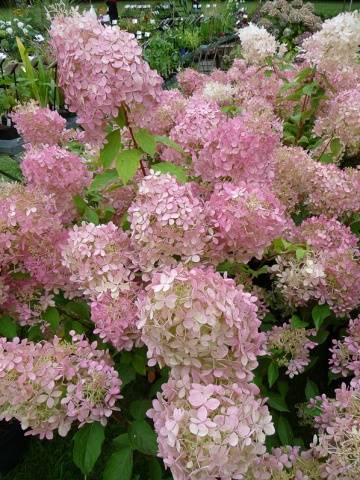 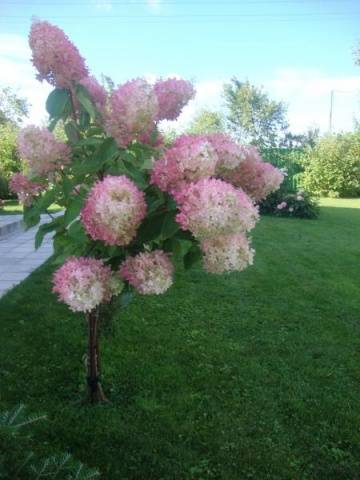 Description of the plant

Today we will focus on Phantom hydrangea, a photo and description of the variety will be presented in the article below.

The Phantom variety is a spreading bush or tree. The crown diameter is about two meters, and the height is slightly higher. The dark green foliage of the plant is large, without denticles at the edges, whole. Hydrangea shoots are vigorous, strong. Young shoots are easily distinguished by their green color. On lignified branches, the bark turns reddish-brown.

The first flowers appear on the plant at the age of 4 or 5 years. If certain norms are fulfilled during care, then the paniculate variety Phantom will bloom for several decades: a flower has been growing in one place for about 40 years.

The length of the flower brushes is about 30 cm, they are collected in inflorescences, this is clearly seen in the photo. 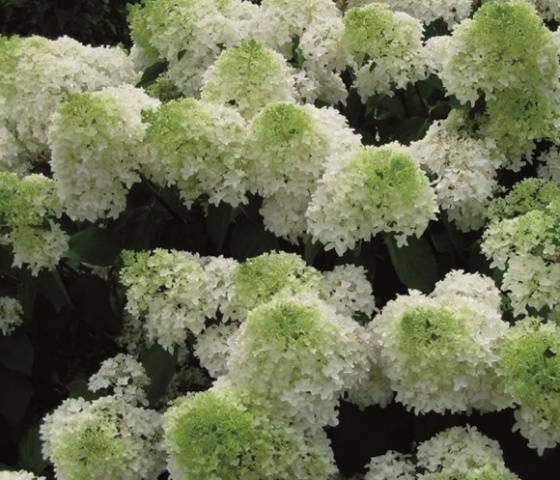 Panicle hydrangea blooms in late June and early July and continues to delight gardeners with large fragrant inflorescences until frost. Interestingly, the color palette on one bush can change during the season:

If the variety is white, then the buds are greenish-cream at first, then become creamy white, and the fading inflorescences acquire a pinkish tint. On cream varieties of Phantom, by the end of flowering, the inflorescences become pale pink.

There are many varieties of panicle hydrangea, and each of them, including the Phantom, is appreciated by landscape designers. They are planted not only in private gardens and courtyards, but also in recreation areas: in city parks, squares.

Since the height of the varieties varies, with the help of the Phantom panicle hydrangea in landscape design, you can create any style:

Attention! If everything is done correctly, then the lush bloom of hydrangea will become a real decoration of any corner of the garden or park.

The Phantom panicle hydrangea is an unpretentious plant, but there are some peculiarities associated with planting and care. They will be discussed in the article.

It is very important to choose the right place when planting the Phantom variety:

It turns out that you need to plant bushes or standard trees in openwork penumbra or on the east side. Taller plants, fences, or a building can serve as protection from the wind.

As mentioned in the description, hydrangea can grow in any fertile soil. But the variety opens best on neutral and acidic loams. On alkaline soils, the inflorescence becomes smaller, the plants weaken, and, as a result, they can get sick.

Warning! If the soil is very acidic, it is deoxidized with dolomite flour, ash, chalk, lime, but it is necessary to add deoxidizers by dissolving in water for irrigation, and not dry, so as not to damage the roots.

The question of when to plant Phantom hydrangea in the ground is far from idle. He worries not only novice gardeners, but also experienced ones, if panicle hydrangea is a beginner in the garden.

Attention! New plants are planted in early spring until they wake up from hibernation.

Early spring is convenient because the planted plants have time to take root before the onset of sap flow and heat. These hydrangeas survive harsh winters better.

When planting bushes or standard trees at any other time, the trunk circle must be mulched so that there is no overheating. This also applies to autumn plantings.

Important! Sawdust and wood chips are not suitable for mulching; it is better to use peat and fallen needles.

Since, according to the description, the panicle hydrangea of ​​the Phantom variety has been growing safely in one place for several decades, a large pit must be prepared: a diameter of at least 80 cm, and a depth of 40 cm or more. 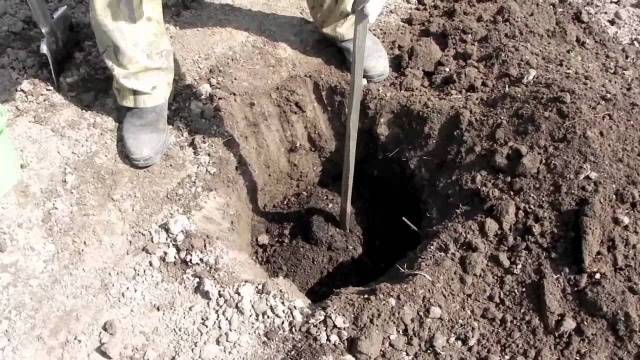 At the bottom of the pit, drainage, humus, peat or compost are laid, which are mixed with mineral fertilizers. As a rule, the planting hole is prepared in advance so that the soil settles and does not drag the plant down.

Saplings can be open or closed root systems. If the roots are open, a tubercle is made in the pit, on which, like a throne, a seedling sits. The roots are straightened, they must be straightened, and directed downward. Fertile soil is poured on top.

Advice! In order for the earth to penetrate under the roots, the soil is watered as the hole is filled. 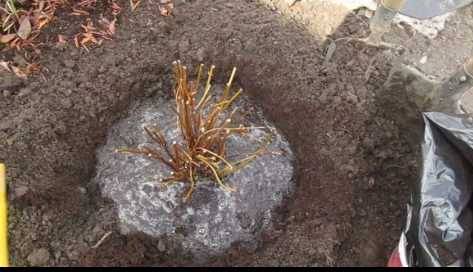 As for the hydrangea paniculate Fontom with a closed root system, planting does not cause problems. Dig a hole, insert a flower and sprinkle it with earth, as in the photo. 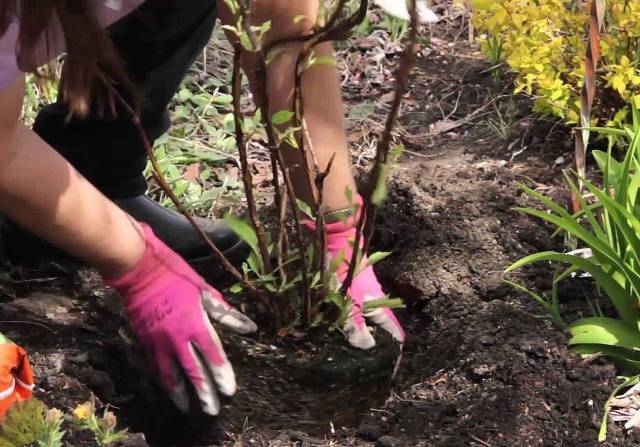 Further care is not particularly difficult:

Since the root system of all types of hydrangeas, including the paniculate variety Phantom, is superficial, watering, loosening and weeding must be carried out carefully. Weeds cannot be left in the near-trunk circle, because pests and disease spores can settle on them.

Top dressing should be carried out often, because due to the abundance of lush inflorescences, the plant needs enhanced nutrition. You can feed hydrangeas with organic, mineral fertilizers. Plants respond well to green fertilizers. After all, fermented grass contains all the necessary micro and macro elements.

The first feeding is carried out during planting, with the addition of nutrients to the planting pit. Adult plants are fed before blooming and during flowering, as well as before sheltering for the winter.

Advice! Every two weeks it is useful to feed the shrubs with infusion of rotted chicken droppings or mullein.

You need to prune the hydrangea every year. If such an operation is not carried out, then the shoots will grow strongly, the crown will be thickened. And this may cause the lack of inflorescences or they will be too small. As a rule, the Phantom hydrangea is pruned in the fall for 3 or 4 buds.

First of all, cut out weak shoots and cut off the faded ones. You also need to remove the shoots growing inside the bush so that there is no shading. Pruning will depend on how you want to shape the hydrangea.

How to properly trim hydrangeas is shown in the photo and video. 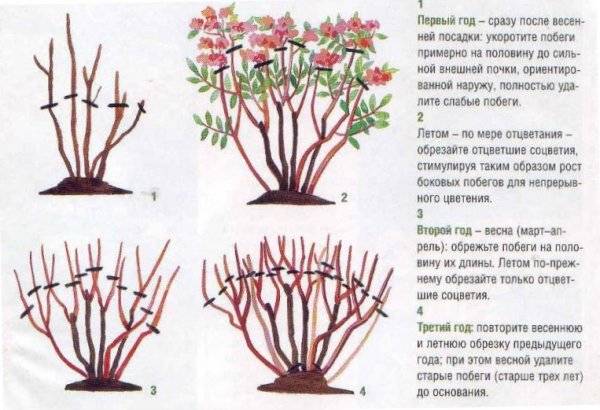 Spring pruning - control. Frozen twigs are removed, and crown formation continues. Old hydrangeas are also rejuvenated by pruning - they remove all shoots at the root.

How to properly prune a panicle hydrangea:

Attention! Healthy hydrangea shoots do not need to be thrown away, because this is an excellent planting material for obtaining cuttings.

Shelter for the winter

The Phantom panicle hydrangea needs to be specially prepared for winter. Everything is done in stages:

The shelter is constructed from wooden boxes or frames are made. Spruce branches and nonwovens can be used as a covering material. They must be fixed so as not to be blown away by the wind. This is the final stage of the shelter; it is carried out with the onset of stable frosts.

There are many options for shelter, some of them are shown in the photo below. 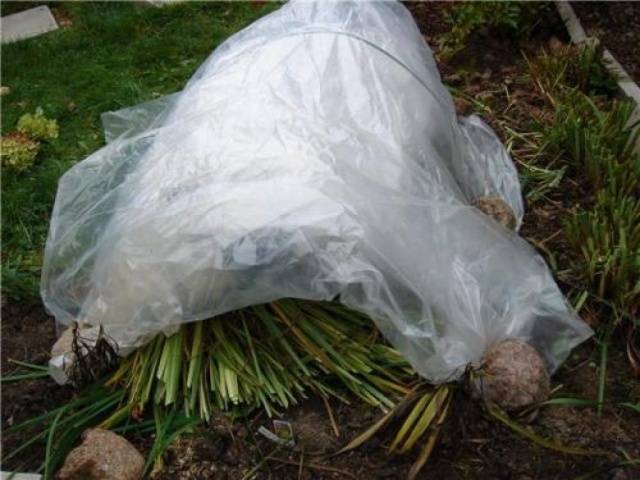 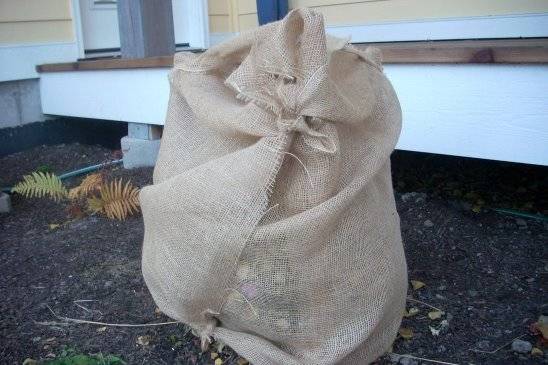 Adult plants can not be covered, but only the roots can be mulched. With the onset of spring days, the shelter is removed.

Alexandra, 29 years old, Transbaikal region
I read about hydrangea on the Internet and caught fire. I wrote out seedlings of the Phantom variety. The seedling took root perfectly. He is already the third year. Hope it blooms next year. There were no problems with him, no diseases, no pests.
Ivan, 43 years old, Yaroslavl
I have different varieties of hydrangeas growing in my dacha. There is also a Phantom among them. I grow them in bush form. They grow along the fence, form a hedge. During flowering, the aromas are awesome. All the neighbors come running. I have already shared the cuttings with many. So a tribe of panicle hydrangea lovers is growing.
Recommended entries
Hydrangea: propagation by cuttings in autumn
Varieties of large-leaved hydrangeas: flowering, frost-resistant, miniature
How to prune a tree hydrangea in the fall: diagrams and video
Hydrangea stalked Miranda: planting and care, photos, reviews
Hydrangea paniculata Silver Dollar: description, photos and reviews
Hydrangea paniculata Magic Fire: planting and care, photos, reviews
Hydrangea paniculata Limelight
How to grow hydrangea in Siberia
Hydrangea Paniculata Fraise Melba: planting and care
Give feedback Cancel reply
Lunar
calendar 2021
January February March April May June July August September October November December
Recommended entries
Hydrangea Weems Red: description and photo
Hydrangea Panicled Vanille Fraise: pruning, frost resistance, in landscape design
Hydrangea: propagation by cuttings in autumn
Hydrangea Paniculata Fraise Melba: planting and care