Rose Princess Margareta (Crown Princess Margareta) belongs to the group of English leander hybrids, characterized by abundant flowering, increased resistance to diseases and low temperatures. At the same time, the shrub retains its decorative effect throughout the season. Many gardeners note that the Crown Princess Margaret variety does not require special care and is able to delight with lush flowering even in regions with risky farming. 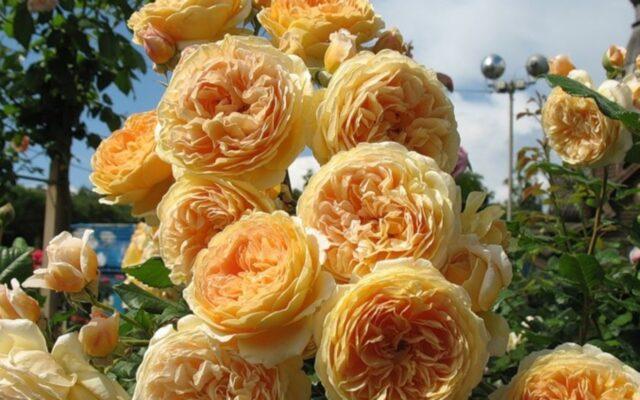 The side branches of the rose grow rapidly in breadth

English bush rose Crown Princess Margaret was bred in England in 1999 by the famous breeder David Austin. The variety was obtained by crossing an unknown seedling with Abraham Darby. The purpose of its creation was to obtain a look that could have the sophistication of old varieties and the characteristics of a modern hybrid tea group. And this David Austin completely succeeded.

The resulting species managed to combine the best qualities of leander hybrids. For this, he was named after the Swedish princess Margaret of Connaught, the granddaughter of Queen Victoria. She proved herself to be an experienced gardener and decorator. Among her works, the Sofiero Summer Palace, which is located in the Swiss city of Helsingborg, stands out.

This species is distinguished by tall, spreading bushes up to 2 m high and 1 m in diameter. Young growing shoots of the Crown Princess Margaret rose are bright green in color with a smooth shiny surface. As it matures, the bark dulls and takes on a brownish tint. The branches of the shrub are rarely covered with thorns, which greatly facilitates care.

Important! During the flowering period, the shoots lean to the ground under load, therefore, to preserve the decorative effect of the shrub, they need to be tied to supports.

The leaves of the David Austin Crown Princess Margaret rose are medium in size, consist of five to seven separate segments that are attached to one petiole. The total length of the plates reaches 7-9 cm. The surface of the leaves is shiny, light green in color with an anthocyanin tint in the spring. The reverse side of the plates is dull, much lighter and with a slight edge along the veins.

Rose Crown Princess Margaret is a re-flowering crop. The first time the shrub begins to form buds in late May - early June and continues until autumn frosts, with short interruptions. Flowers of this variety are cupped, when fully opened, their diameter reaches 10-12 cm. They are collected in a brush of three to five pieces. The buds are densely double, each of them consists of 60-100 petals. They retain their shape for a long time and do not crumble.

The park rose variety Crown Princess Margaret is characterized by lush flowering, which is inherent in all types of selection by David Austin. The buds on the shrub are evenly distributed along the entire length of the shoots. They have an orange-coral hue. Judging by the photos, reviews of gardeners and the description, the outer petals of the Crown Princess Margaret rose brighten as it blooms, and the central part of the flower remains saturated and does not become exposed. The buds in the brush open gradually. At the same time, they exude a rich aroma reminiscent of tropical fruits.

Important! Each flower has a lifespan of 7 days, so the variety is suitable for cutting. 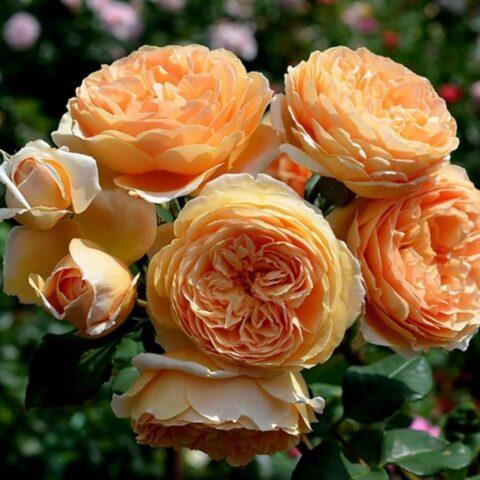 Rose flowers Crown Princess Margaret do not suffer from rain

This species is characterized by high frost resistance. The shrub can withstand temperatures as low as -28 degrees. The plant has a strong vitality, therefore, when the shoots freeze in winter, it quickly recovers.

Climbing rose Crown Princess Margaret is not very susceptible to common diseases of the culture, namely powdery mildew and black spot. The plant also easily tolerates high humidity. Therefore, this scrub can be grown in regions with cool, damp summers without fear of flowering quality.

Advantages and disadvantages of the variety

The English rose Crown Princess Margareta has many advantages that make it stand out from other species. This explains the popularity of the shrub with gardeners around the world. But this variety also has certain disadvantages that you need to know when growing it. 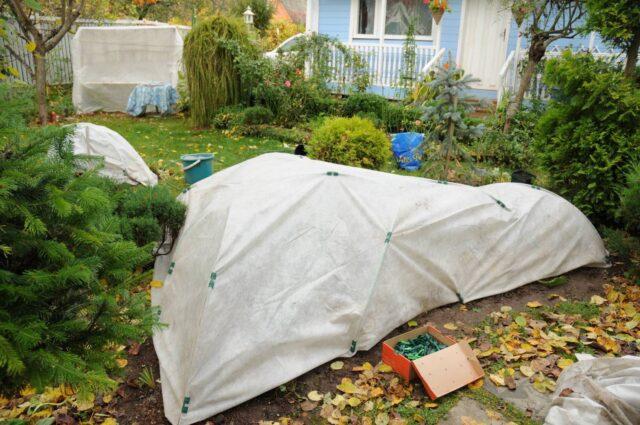 With proper shelter, the shrub is able to withstand frosts down to -35 degrees

Important! When placed in an open area where the sun lasts all day, the flowers fade to a light yellow hue.

You can get new seedlings of the English Rose Crown Princess Margaret by cuttings. To do this, at the beginning of summer, cut young shoots with a thickness of 0.7-1 cm and divide them into pieces of 10-15 cm. Before planting, the cuttings must be prepared. To do this, completely remove the lower pair of leaves, and shorten the upper one in half, which will preserve the sap flow in the tissues. Then powder the lower sections with any root former and immediately plant the cuttings in a shaded place at a distance of 3 cm from each other.

To create favorable conditions from above, you need to install a mini-greenhouse. Throughout the season, it is necessary to regularly ventilate and water to keep the soil always slightly damp. When the seedlings get stronger and grow, they should be transplanted to a permanent place. But this can be done not earlier than in a year. 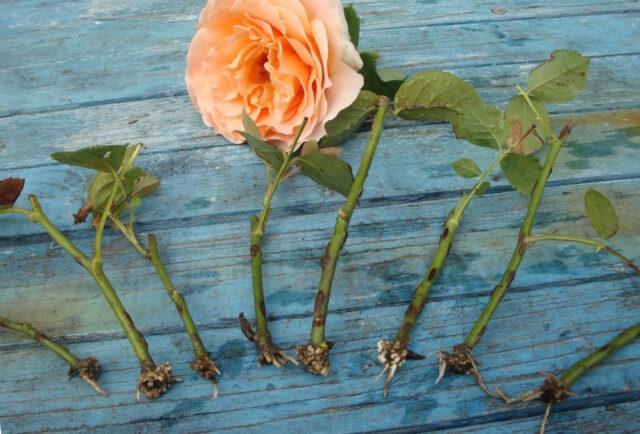 Planting and caring for a rose Princess Margaret

This English rose does not require a lot of light, so it can be planted in partial shade. In this case, the option is considered optimal when at noon the shrub will be hidden from direct sunlight. This will keep the petals rich in color and extend the flowering period.

For the park English rose Crown Princess Margaret, loamy soil with low acidity in the range of 5.6-6.5 pH is suitable. It is also important that the soil has good air and moisture permeability. In the case of planting in heavy clay soil, you must first add 5 kg of peat and sand to it, and add humus to the sandy soil.

It is recommended to plant a seedling in the fall, namely in September. This will allow you to get a well-rooted shrub by the spring. When planting, humus should be added to the soil, as well as 40 g of superphosphate and 25 g of potassium sulphide. It is impossible to add nitrogen fertilizers and fresh manure to the hole, as they interfere with rooting.

Important! When planting, the root collar of the rose should be buried 2 cm into the soil, which stimulates the growth of lateral shoots.

According to gardeners' reviews, the Crown Princess Margaret rose does not require complex care. Therefore, it is enough to adhere to the standard rules of agricultural technology. Watering the shrub is necessary only during a prolonged drought. To do this, use settled water. Irrigation should be carried out at the rate of 15 liters per plant when the soil in the root circle dries up to a depth of 3 cm.

Fertilize the Crown Princess Margaret rose regularly throughout the season. Therefore, in the spring during the active growing season, organic matter should be used, which stimulates the growth of green mass. At the beginning of summer, you can use nitroammofosk, and from the second half, completely switch to phosphorus-potassium mineral mixtures. This feeding scheme contributes to the abundant flowering of the Crown Princess Margaret rose and strengthens her immunity before wintering.

Important! The frequency of fertilization is every two weeks, but this procedure should not coincide with the massive flowering of buds.

Throughout the season, loosen the soil in the root circle and remove weeds. This will preserve nutrients and improve air access to the roots.

Pruning is an integral part of the care of the Crown Princess Margaret rose. It should be carried out annually in the spring. For full development and flowering, no more than five to seven skeletal branches should be left on the shrub, shortening them by 1/3. It is also necessary to clean the crown of the rose from broken and thickening lateral branches. 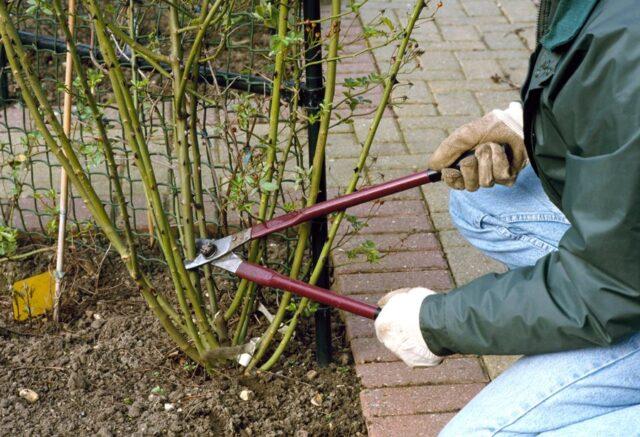 All frozen branches should be trimmed to healthy tissue.

For winter, the root circle of the Crown Princess Margaret rose should be sprinkled with a layer of mulch of 10 cm, and the above-ground part should be bent to the ground and laid on spruce branches. Then put arcs on top and cover with agrofibre.

Important! In regions with a temperate climate, the Crown Princess Margaret rose can not be removed from the support, but simply wrap the crown in two layers with spandbond.

This variety has a high natural immunity. Therefore, it is rarely affected by diseases and pests. But if the growing conditions do not match, the resistance of the Crown Princess Margaret rose weakens. Therefore, it is recommended to carry out at least three preventive treatments with fungicides and insecticides per season.

This species is able to completely fill the allotted free space. Therefore, it is ideal for decorating arches, gazebos, pergolas and walls. 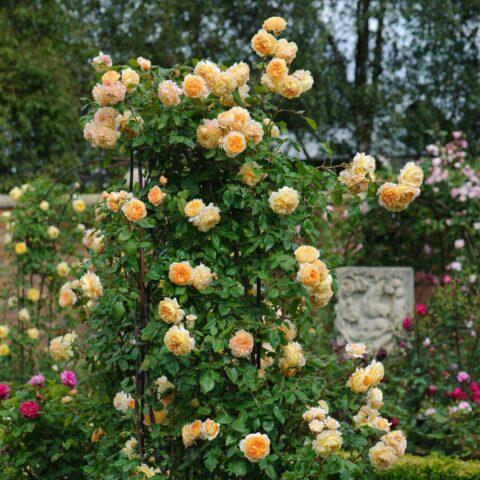 Rose Princess Margaret is a worthy representative of the English species, which combines all the qualities inherent in the selection of David Austin. Therefore, this variety will not be able to get lost even in the most numerous collection. Some gardeners admire him, others - bewilderment, but in any case does not leave anyone indifferent.

Svetlana Skurikova, 43 years old, Vladimir
I have been growing the Crown Princess Margaret rose for five years. In the first year after planting, the growth was no more than 80 cm, and the diameter of the rare buds was about 7 cm. But already the next season, the rose struck with its strength of growth and the beauty of flowers of an unusual peach shade. For the winter, I bend the bush to the ground and cover it with several layers of agrofibre. During this time, there were frosts down to -38 degrees, but the plant endured them steadily without any problems. 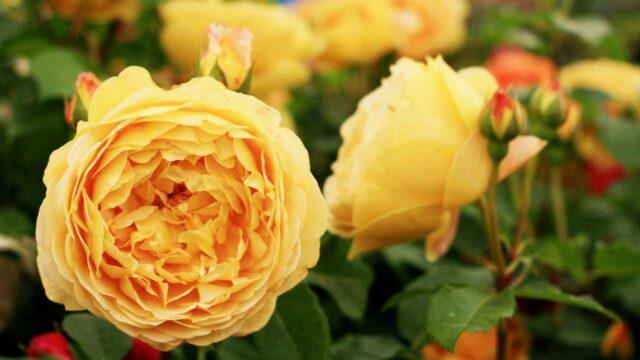 Irina Kuznetsova, 48 years old, Bryansk
Rose Crown Princess Margaret took up residence in my garden about 10 years ago. Already in the first year, it began to grow actively. In the second season, the height of the shrub reached 120 cm. The plant bloomed well, but since I placed it in partial shade, the buds began to form only in the first decade of June. But this led to the fact that the shade of the petals fade slightly and remains saturated. In the future, the rose did not require complex care. Now it is a huge bush up to 2.5 m high, which blooms profusely until late autumn. I consider it one of the best in my collection. 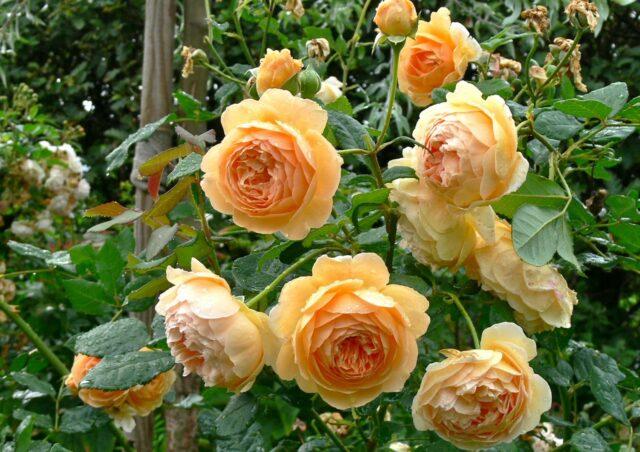