Relatively young, but already conquered the hearts of gardeners, the Princess Anne rose has absorbed all the best from the English varieties. Its buds are graceful and painted in a pleasant pink, almost crimson color. But in order to enjoy all the beauty and aroma of flowering bushes, you should take proper care of them. 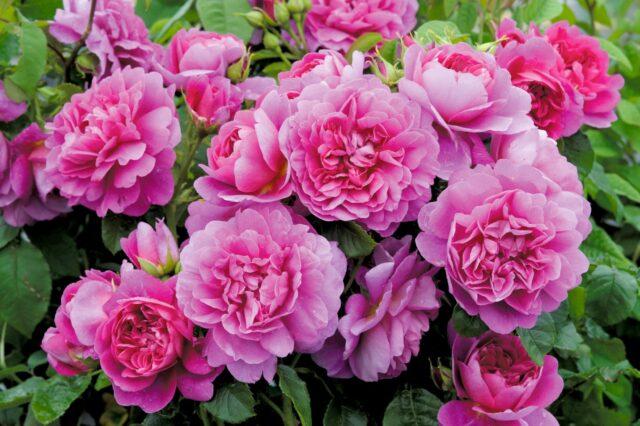 Rose of the Princess Anna variety is universal, it is used both in landscape design and in floristry.

Rose variety Princess Anne was bred by the famous English rose grower and breeder David Austin in 2010. The name was given to him in honor of Princess Anne - the daughter of Queen Elizabeth II of England.

A year after its creation, in 2011, the Rose Princess Anne won her first award at an international exhibition in the UK, she was named "Best New Variety of Plants". A year later, the prickly beauty was awarded the title of "Gold Standard".

Description and characteristics of the rose Princess Anna

Austin's Princess Anne rose variety belongs to the scrub class. Reminiscent of a hybrid of the classic version of the English antique flowers. The bush is compact, erect, rather branched. Its height can reach up to 120 cm, and its width - 90 cm. The shoots are strong, straight and even under the weight of large buds they practically do not bend. There are many thorns, a moderate amount of green mass. The leaves are medium in size, leathery, with a glossy surface and finely serrated edges.

The buds form evenly throughout the bush. They are collected in large clusters of 3-5 pcs., But you can also observe single flowers. They are densely double and rather large, the diameter of which varies within 8-12 cm. At first, the buds are conical in shape, at the peak of flowering they are goblet. Only when they have blossomed, they have a dark pink hue, almost red (crimson). With age, the flowers lose their rich color, becoming pink with a lilac tint. The petals themselves are narrow, numerous (up to 85 pcs.), Densely stuffed. On their back, you can see a yellowish overflow.

Attention! Princess Anna has a medium-bodied aroma, similar to the scent of tea roses.

Flowering is repeated, undulating, from June to October, almost before the onset of the first frost. Throughout the growing season, the bush very advantageously changes the color palette, which gives this variety its own charm. The flowers are resistant to bad weather and easily tolerate short rains. Under good growing conditions, they can remain on the bush without drying out or crumbling for up to 5-7 days.

Advantages and disadvantages of the variety

Rose is a very beautiful garden plant. The proof of the magnificence of this flower is the Princess Anna rose variety, which can be easily attributed to unpretentious and very hardy. But still, before buying a seedling, all the positive and negative qualities of a garden plant should be weighed so that there are no difficult growing problems. 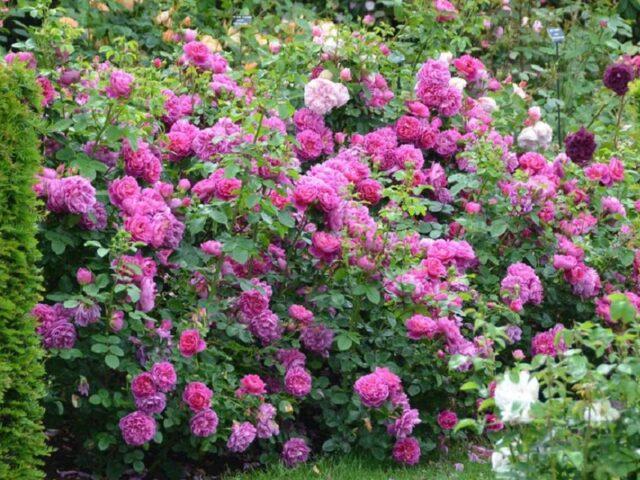 The compact and beautiful shrub makes the Princess Anne rose ideal for growing as a hedge and for decorating borders.

Since the English park rose Princess Anne is a hybrid, it should only be propagated vegetatively. Cutting is considered the most optimal and productive method that can be used at home.

Important! Planting material for cuttings should be taken only from healthy mature bushes.

To prepare cuttings, choose a strong semi-lignified shoot. With the help of a secateurs, a branch is cut off at an angle above the upper bud, which is located on the outside of the crown. Cuttings are cut from the lower and middle parts of the branch, leaving one leaf on each segment. In this case, the lower cut is made oblique (45 °), the upper one is left straight. The finished planting material is treated with a growth stimulant. Then the cuttings are planted in the prepared soil. They are deepened by 2-3 cm, they are well compacted and watered around the ground. For better rooting, you should create a greenhouse effect for the planting by covering the container with the planted cuttings with a film. Under proper conditions, the roots will appear in about 30 days.

Also, at home, the Princess Anna rose can be propagated by dividing the bush. This method is used if a plant is transplanted to a new place. It is carried out in early spring after the snow melts. First, the bush is thoroughly watered, then it is dug up. The roots are well cleaned of an earthen clod and, using a sharp knife or shovel, divide them into parts. In this case, it is important that each separated part has 2-3 shoots and a well-developed rhizome. The damaged places are removed. Shoots are shortened, leaving 3-4 buds. The place of division of the root must be lubricated with a chatterbox (a mixture of clay and manure in equal amounts). After that, the parts are immediately planted in a new permanent place.

The best time to plant Princess Anne roses is mid-spring. In the autumn, it is carried out only if the weather conditions are not very changeable, and the plant can take root before winter.

The place for the Princess Anna rose should be chosen taking into account that the sun's rays fall on the bush only in the morning and evening hours. At noon, he would be in shade. The site itself should not be low or too open for through winds. And the groundwater should pass at a depth of at least 1 m. 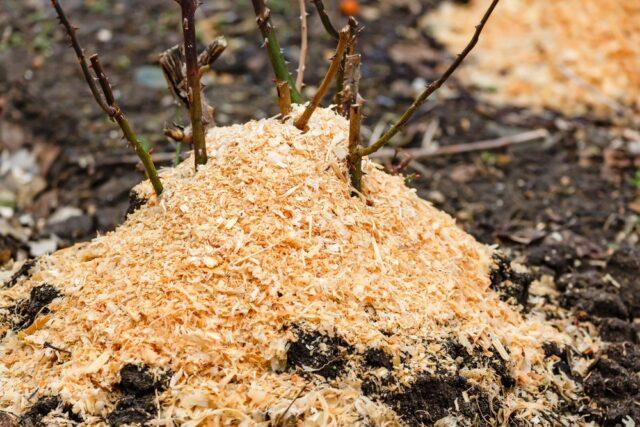 At the end of planting, a rose seedling Princess Anna is watered, the soil around is mulched with sawdust or peat

The most suitable indicator of soil acidity ranges from pH 6.0-6.5. Chernozem is considered optimal for a rose, but its cultivation is also permissible on loamy soils, only in this case it will need to be periodically enriched with organic matter.

Planting a rose of the Princess Anna variety is carried out immediately to a permanent place, since she does not tolerate a transplant well. To do this, a pit of 50x70 cm is dug in advance. At its bottom, drainage is formed from gravel or crushed stone with a layer of at least 10 cm. Soil taken out of the pit is poured on top, mixed with compost in the form of a cone. Before planting, the roots of the Princess Anna rose seedling are first placed in a clay chatterbox, then they are transferred to a prepared hole and, after gently straightening the roots along an earthen cone, they begin to fall asleep with the rest of the soil. This is done in such a way that the root collar after tamping is located 3 cm below the soil level.

The Rose Princess Anna does not need constant watering, it is enough for her to moisten the soil once every 10-15 days. If the weather is dry, the frequency of irrigation can be increased. At the end of summer, watering is carried out less often, and in September it is completely stopped.

Every year, the Princess Anne rose requires feeding in order to gain strength for abundant flowering.As a rule, in the spring, the bush requires nitrogen-containing fertilizers to build up green mass and young shoots. And during the flowering period, it is desirable to feed it with a potassium-phosphorus composition.

Pruning is also necessary for this type of rose. It is performed at least twice a season. In the spring, remove all frozen shoots, and cut healthy ones by 1/3. During the flowering period, dried buds are harvested. In the fall, sanitary pruning is carried out, thinning the bush and removing damaged branches.

The rose variety Princess Anna needs a shelter only if the winter is rather severe with frosts of about -3 0 ° C. Otherwise, it is not required to cover the bushes.

The rose Princess Anna has good immunity to diseases, and pests practically do not touch the bushes. But still, like all plants, it can be affected by gray and root rot. And if in the first case, at an early stage, the disease can be detected by the appearance of small spots on the leaf plates and a gray bloom on the flowers, then root rot manifests itself very late, when the plant is completely depleted, loses strength, withers and subsequently dies. 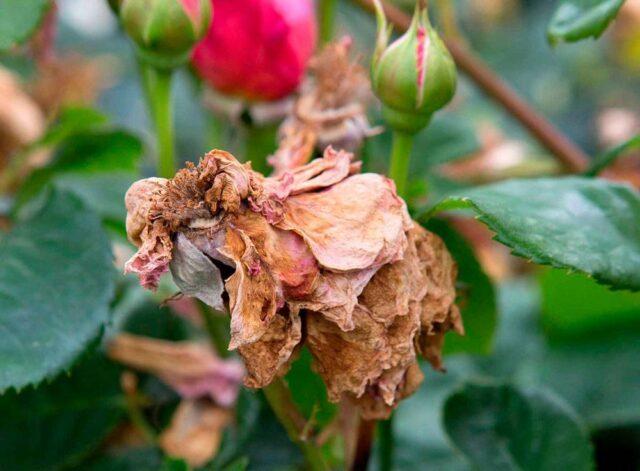 Gray and root rot appears with illiterate rose care, in particular, with improper watering or feeding

Rose Princess Anna, judging by the photo, description and reviews of gardeners, is a very beautiful flower that can decorate any personal plot. It looks great in group plantings in combination with roses of other shades, as well as flowers such as phlox, hydrangea, geranium, peonies and bells. Designers often use it as a single culture, as a tapeworm or to decorate borders. 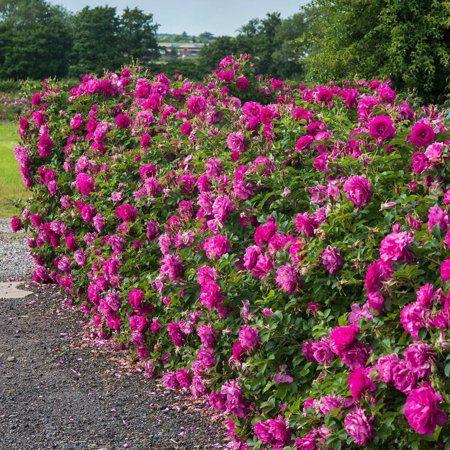 Princess Anne is also suitable for creating a hedge

Rose Princess Anne is a good variety for planting both in limited areas and on larger estates. Its uniqueness lies in the fact that with minimal labor costs you can get a lush blooming bush that can easily become the center of the garden.

Reviews with a photo about the rose Princess Anna

Elizaveta Shestak, 38 years old, St. Petersburg
When the question arose about planting roses in the country, I immediately decided to take the Princess Anna variety. I could not pass by charming pink flowers. Painfully they look gorgeous in the photo. To be honest, I didn’t regret it at all. I bought a healthy seedling (I approached the choice with all seriousness, so as not to complicate my life). After landing on the site, I received a gorgeous bush with densely located large flowers. It grows very well, I chose the place in partial shade, so the color of the petals practically does not fade, and they do not crumble for a long time. I am very pleased with this rose, the decoration of my garden. 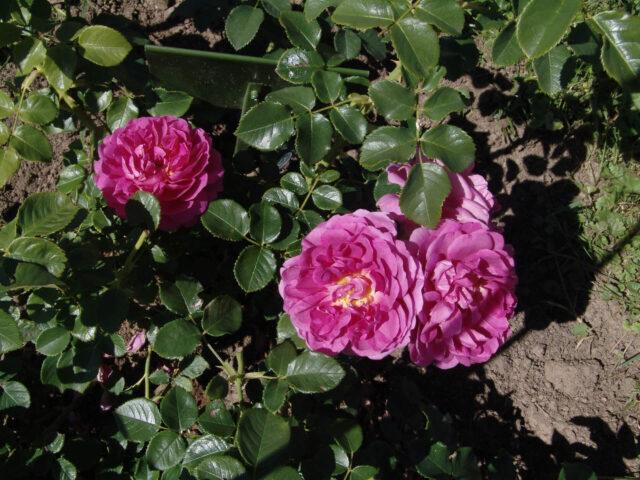 Evgenia Zvonova, 44 years old, Novosibirsk
Honestly, Austin roses are not to my liking, since along with their advantages, they also have a lot of disadvantages. And, despite the fact that these flowers are almost always in fashion among gardeners, I do not like many varieties except for one - Princess Anne. For some reason, I have a certain weakness for this rose. There is something attractive in it, its own "zest". The first is, of course, color (bright crimson on the inside and yellow on the outside, as if with a glow). The second is narrow and densely stuffed petals, which give the impression that the flower is artificial. And the third is that roses are always directed upwards, even when it is raining. 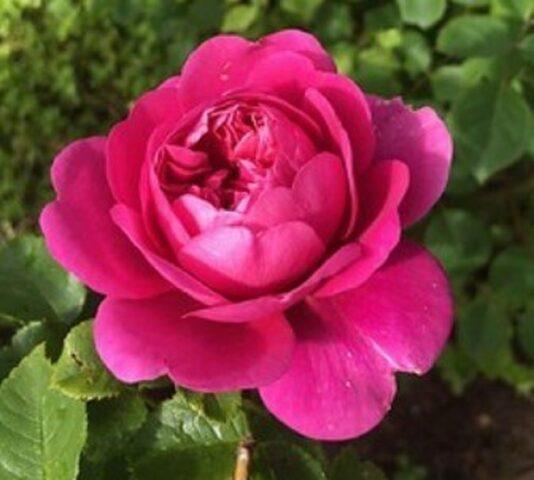