Do-it-yourself greenhouse from a galvanized profile

The frame is the basic structure of any greenhouse. It is to it that the cladding material is attached, be it film, polycarbonate or glass. The durability of the structure depends on the material used for the construction of the frame. Frames are made of metal and plastic pipes, wooden bars, corners. However, a galvanized profile that meets all construction requirements is considered more popular for greenhouses.


Like any other building material, a galvanized profile has its advantages as well as disadvantages. Most of all, the material receives positive reviews from summer residents. In particular, this is reasoned by the following points: 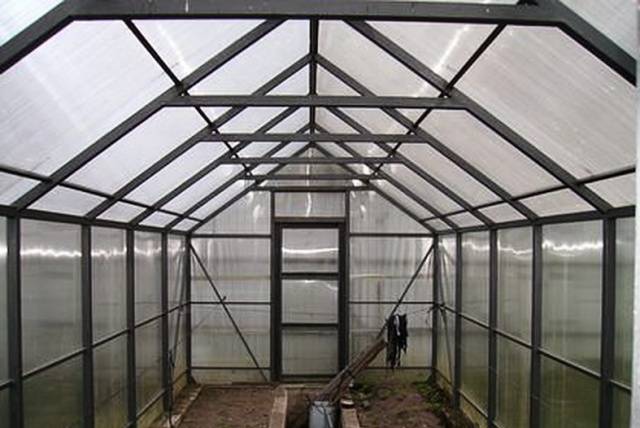 On sale now there are ready-made greenhouses from a galvanized profile in disassembled form. It is enough to buy such a designer and assemble all the details according to the scheme.

Attention! Any profile greenhouse is lightweight. To avoid its movement from a permanent place or tossing over from a strong wind, the structure is securely fixed to the base.

Usually the greenhouse frame is attached to the foundation with dowels. In the absence of a concrete base, the frame is fixed to pieces of reinforcement hammered into the ground with a step of 1 m.

The disadvantage of a galvanized profile can be considered a low bearing capacity relative to a metal pipe. The bearing capacity of the profile frame is maximum 20 kg / m2... That is, if more than 5 cm of wet snow accumulates on the roof, the structure will not support such a weight. That is why most often the profile frames of greenhouses are made not with a pitched roof, but with a gable or arched roof. On this form, precipitation is less retained.

As for the absence of corrosion, this concept is also relative. The profile does not rust quickly, like a regular metal pipe, as long as the zinc plating remains intact. In those areas where the galvanized coating was accidentally broken, over time the metal will corrode and will have to be painted.

What is omega profile 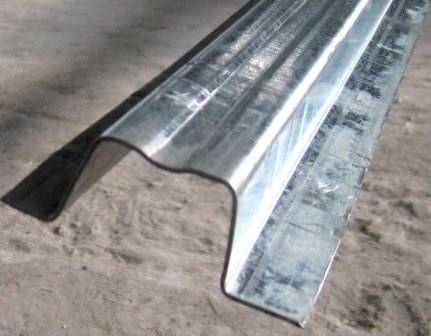 Recently, a galvanized "omega" profile has been used for the greenhouse. It got its name from a bizarre shape reminiscent of the Latin letter "Ω". The omega profile consists of five shelves. Many firms produce it in different sizes according to the individual order of the consumer. Omega is often used in the construction of ventilated facades and roof structures. Due to the simple installation of the profile with their own hands and increased strength, they began to use it in the manufacture of the frame of greenhouses.

Due to its shape, the "omega" can carry more weight than a regular profile. This increases the bearing capacity of the entire greenhouse frame. Among the builders, "omega" received another nickname - the hat profile. For the production of "omega" metal is used with a thickness of 0.9 to 2 mm. The most popular are products with a wall thickness of 1.2 mm and 1.5 mm. The first option is used in the construction of weak, and the second - reinforced structures.

Assembling the profile frame of the greenhouse


Having decided to improve your home area with a greenhouse made of a galvanized profile, it is better, of course, to give preference to "omega". Before buying material, it is imperative to draw up an accurate drawing of all structural details and the greenhouse diagram itself. This will simplify the process of future construction and will allow you to calculate the required number of profiles.


It should be noted right away that if an "omega" profile is chosen for the greenhouse frame, then it is better to make a gable roof. Arched structures are difficult to bend on their own, moreover, the "omega" breaks when bent.

The end walls define the shape of the entire frame. To make them of the correct shape, all the parts are laid out on a flat area. Any flaw in the design will entail a skew of the entire frame, to which it will be impossible to fix polycarbonate. 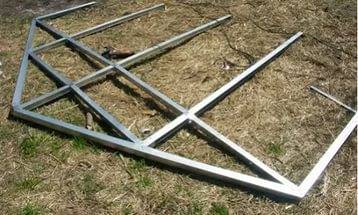 Further work is performed in the following order:

The last thing to prepare before assembling the frame is 4 pieces of profile the size of a greenhouse. They are needed to fasten the end walls together.

Assembling the profile frame of the greenhouse 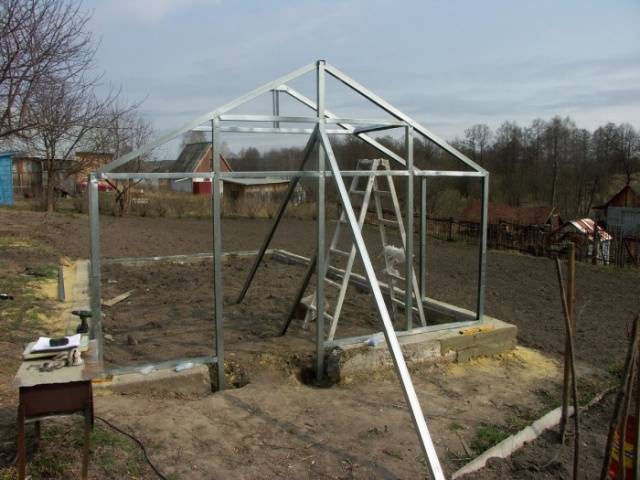 The assembly of the frame begins with the installation of both end walls in their permanent place. To prevent them from falling, they are propped up with temporary supports. The end walls are connected with prepared 4 long profiles.The upper corners of the opposite walls are fastened with two horizontal blanks, and the same is done with two other blanks, only at the bottom of the structure. The result is the still fragile frame of the greenhouse. 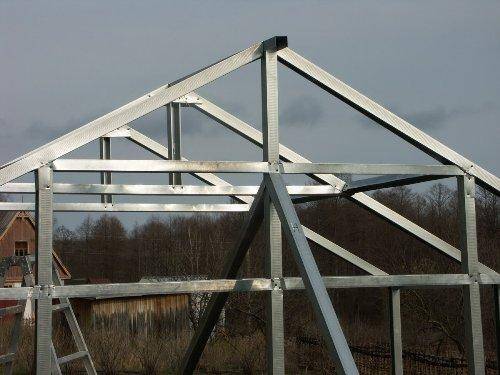 On the lower and upper newly installed horizontal profiles, marks are made every 1.05 m. In these places, the rack-mount stiffeners of the frame are attached. Prepared skates are fixed to the same racks. The ridge element is installed last at the very top along the length of the entire greenhouse.

Reinforcement of the frame with additional stiffeners 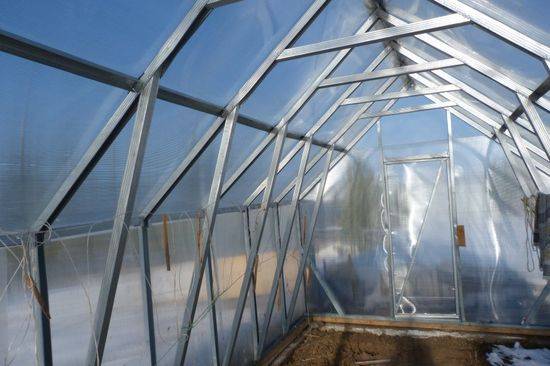 The finished frame is strong enough to withstand moderate wind and rainfall. If desired, it can be additionally reinforced with stiffeners. Spacers are made from pieces of a profile, after which they are fixed diagonally, reinforcing each corner of the frame.


Sheathing the frame with polycarbonate begins with attaching the lock to the profile, at the joints of the sheets. The lock is simply screwed on with self-tapping screws with rubber gaskets. 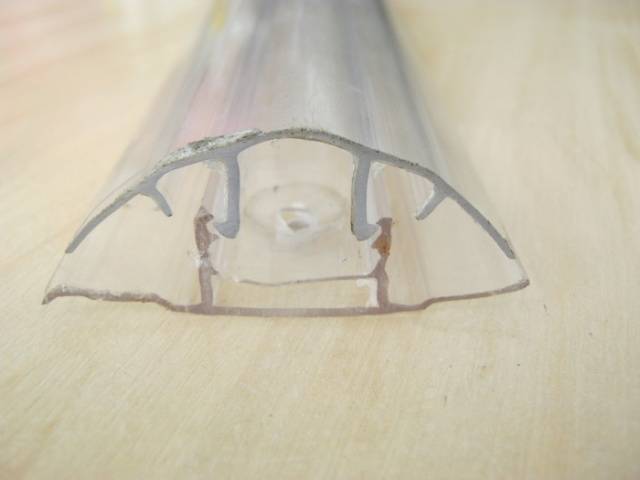 Attention! Self-tapping screws on a sheet of polycarbonate are tightened with a step of 400 mm, but before that it must be drilled.

It is optimal to start laying polycarbonate from the roof. The sheets are inserted into the grooves of the lock and screwed to the profile with self-tapping screws with plastic washers. 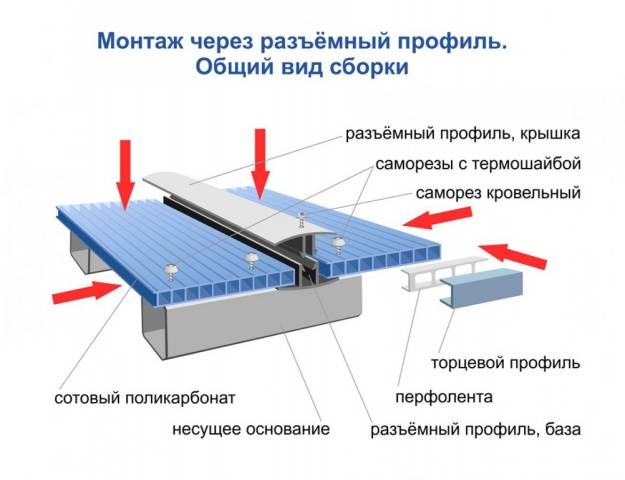 All polycarbonate sheets should be evenly pressed against the frame with self-tapping screws. It is important not to overdo it so that the sheet does not crack. 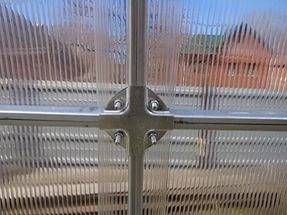 After fixing all the sheets, it remains to snap the top cover of the lock and remove the protective film from the polycarbonate.

Attention! Laying of polycarbonate is carried out with a protective film outside, and the ends of the sheets are closed with special plugs.

The video shows the manufacture of a greenhouse frame from a profile:

The greenhouse is completely ready, it remains to do the internal arrangement and you can grow your favorite crops.

Reviews of summer residents about profile frames for greenhouses