Sulfuric checker for a greenhouse made of polycarbonate: the benefits of fumigation, processing in spring, autumn, instructions, reviews

Polycarbonate greenhouses help create almost ideal conditions for the growth and development of cultivated plants. But these same conditions also attract their numerous enemies: harmful insects, small mammals, spores of fungi and bacteria, viruses. In a closed greenhouse, not all means of controlling plant pests are effective. In addition, many of the parasites are microscopic in size and like to hide in numerous crevices and other inaccessible places for processing. At the stage of too intensive infestation with parasites, it is advisable to use the help of smoke fumigation of the greenhouse. Both the harm and the benefits of sulfur sticks for processing greenhouses are approximately at the same level, so you should be well aware of situations when their use is really justified. 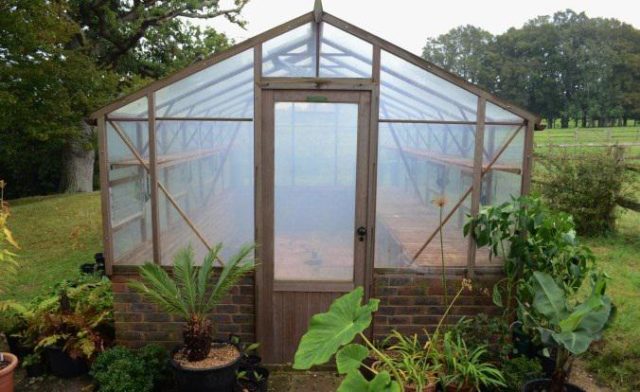 Benefits of fumigating a greenhouse with a sulfur stick

Fumigation, or smoke treatment of greenhouses, has been used for many decades and enjoys well-deserved respect not only among summer residents, but also among professionals who grow flowers or vegetables in greenhouse industrial complexes. The essence of this method is that the entire greenhouse room is filled with a large amount of smoke that can penetrate into all, even the most inaccessible cracks and openings. Sulfurous anhydride is released during the smoldering of sulfuric blocks, which completely destroys viruses, bacteria, fungal spores, as well as larvae and adults of insect pests. The smoke also has a depressing effect on rodents, creating a deterrent effect. Thus, long-term protection is created against almost all diseases and pests, from which cultivated plants grown in greenhouses can suffer.

The benefits of using a sulfur checker for a polycarbonate greenhouse

Sulfur checker, depending on the manufacturer, is a tablet or a single tube, the main active ingredient of which is sulfur at a concentration of about 750-800 g / kg.

Among many other types of fumigators, the sulfur checker has the following undeniable advantages:

Pros and cons of using

In addition, the relative speed of solving the problem can be attributed to the obvious advantages of using sulfur sticks.The very release of smoke occurs within a few hours, after which the effectiveness of the effect remains for several months.

It should also be noted that this remedy is highly effective. Indeed, in some cases of fighting the most resistant insect pests (for example, whitefly or spider mites) or bacterial diseases, all other means do not guarantee such an almost 100% solution to the problem.

But sulfur checkers when processing a greenhouse, in addition to benefits, can also bring significant harm if you do not follow safety measures and basic rules for working with them.

Substances that are formed as a result of the interaction of sulfuric gas with water have a destructive effect on any metal structure. And greenhouses made of polycarbonate are most often based on a metal frame. With the deliberate choice of sulfur blocks, all metal parts of the greenhouse must be protected with a primer or painting. Better yet, treat them with any fatty substance (for example, grease) that will prevent the metal from entering into a chemical reaction.

Comment! There are still no reliable negative facts about the effect of sulfur bombs on polycarbonate. But according to some reviews, reusable sulfur block treatments of greenhouses lead to clouding of the polycarbonate surface and the appearance of microcracks. 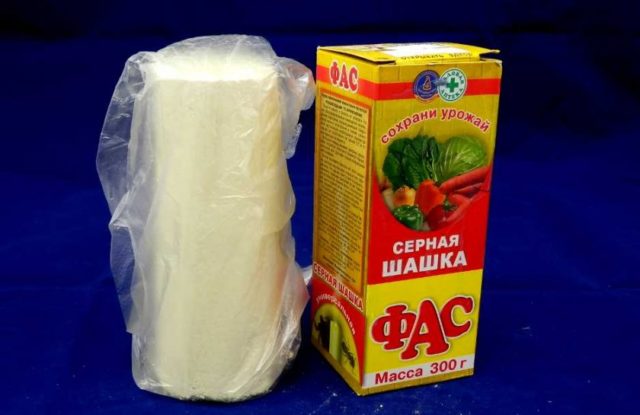 The smoke that is emitted during the use of sulfuric bombs interacts with water and other substances present in the greenhouse soil (for example, wood ash), and forms different types of acids: sulfurous, sulfuric. They are able to kill not only harmful microorganisms, but also those that improve soil fertility. At the same time, the effect of smoke does not apply to the deepest layers of the soil. Therefore, after fumigation, it is necessary to additionally treat the soil in the greenhouse with special preparations containing a complex of beneficial microorganisms (Baikal, Fitosporin and others).

Smoke also has a very negative effect on any organic creature. Treatments cannot be carried out in the presence of any plants, and therefore it is important to take into account the timing of the fumigation operation with this agent.

And, of course, smoke is a danger to human health, so all safety precautions should be followed.

Types of checkers for greenhouse processing

In general, several types of smoke bombs are known for processing greenhouses. They differ in the composition of the main active ingredient and, therefore, have their own characteristics of use.

How to use a sulfur stick in a greenhouse

To get the maximum effect from the use of sulfuric checkers and not harm either yourself or the plants, you need to know and follow all the basic rules for its use.

When to process a greenhouse with a sulfur checker

In the fall, the most optimal time comes for processing the greenhouse with a sulfur stick. The best time is right after full harvest. This usually occurs in late September or October before the onset of persistent frosts. It is important that the temperature of the soil in the greenhouse at the time of processing does not fall below + 10 ° C.

If the contamination of the greenhouse is not serious, then a single autumn treatment is sufficient. In winter, with frosts, all other parasites should die.

But special situations happen if they did not manage to carry out the processing in the fall or the degree of infection of the greenhouse is too high. In this case, you can process the greenhouse with a sulfur stick and in the spring.

But it should be borne in mind that at low temperatures, the soil absorbs the formed sulfuric acid too intensively. Therefore, in order not to harm the plants, it is necessary to wait until the soil surface warms up to + 10 ° С. On the other hand, after treatment with a sulfur checker, at least two weeks must pass before planting seedlings or sowing seeds in a greenhouse. Therefore, it is necessary to monitor the current weather conditions and choose the moment of processing the greenhouse with a sulfur stick in the spring very carefully. Depending on the region, it can occur in the interval from late March or early April to late April or early May.

How many sulfur checkers do you need for a greenhouse 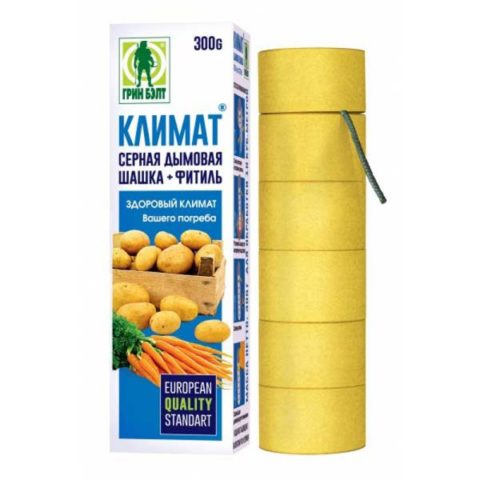 Sulfur checkers are most often sold in packs of 300 or 600 g. Instructions for the use of sulfur checkers for a greenhouse says that about 60 g of the preparation must be used per 1 cubic meter of volume. Accordingly, one package should be enough for 5 or 10 cubic meters of greenhouse air volume. It is important to note that it is the volume that should be calculated, and not the area of ​​the surface to be treated.

For example, for a standard polycarbonate greenhouse measuring 3x6 meters, with a height of about 2 meters, you need about 3-4 packs of sulfur checkers, weighing 600 g.

Comment! Since the roof of polycarbonate greenhouses is usually a semicircle, the volume is calculated approximately.

However, the consumption of sulfur sticks also depends on the manufacturer. For example, in the instructions for the "Climate" sulfur checker for a greenhouse, it is indicated that only 30 g is used per 1 cubic meter of air, that is, exactly one tablet that is part of the preparation (to combat mold, fungi and bacteria).

Therefore, before buying and using a sulfur checker of a particular company, it is advisable to carefully study the attached instructions.

How to use a sulfur checker in a greenhouse

Before disinfecting a polycarbonate greenhouse with a sulfur checker, it is necessary to carry out a general cleaning in it, make sure that the building is as tight as possible and protect all metal elements of the structure. 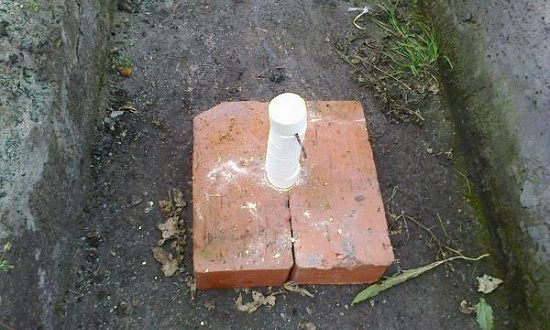 When carrying out the actual fumigation, non-combustible supports are prepared for the stable placement of sulfur bombs. These can be bricks, stone or concrete blocks. They must be stable and take up much more space than the sulfur stick itself. So that in case of an accidental fall, the checker does not ignite. It is necessary to place the total number of sulfur blocks so that they are evenly distributed throughout the greenhouse.

Attention! Sulfur bombs should not be divided into many parts, otherwise it will take too long to ignite them.

Since the smoke that will begin to emit after smoldering poses a danger not only for inhalation, but also when it comes into contact with human skin, it is necessary to be well protected from it when ignited. Clothing should tightly cover all parts of the body, and the face should be protected with a respirator and goggles.

After installation, the checkers set fire to the wick. If it is not there, then you can use pieces of paper, newspaper or, in extreme cases, kerosene. In no case should gasoline be used to ignite the sulfur checker. If everything went well, then dark spots appear on the surface of the tablets and acrid smoke begins to stand out. From this moment, you should leave the room as soon as possible and close the door behind you as tightly as possible.

Sulfur checkers smolder for several hours, after which the greenhouse should be left in a hermetically sealed state for another day for the most complete disinfection. Then open all windows and doors and ventilate the greenhouse for at least 2-3 days.

Do I need to wash the greenhouse after the sulfur checker

The inner surfaces of the greenhouse do not need to be washed after fumigation with a sulfur stick, since this will preserve the therapeutic effect for a longer period. But it is advisable to treat the soil with agents containing live microorganisms, and add additional doses of organic fertilizers.

As mentioned above, sulfuric gas can lead to serious poisoning if inhaled. In addition, when the gas interacts with water, acid corrosive to the skin is formed. Therefore, you should take a responsible attitude to the protection of the body, mucous membranes and respiratory organs from harmful effects. A headgear that completely covers all parts of the body, gloves, goggles and a respirator is required.

After the wick is lit, there are literally two minutes left before intense gas evolution begins. During this time, you need to have time to leave the room and not endanger your health. 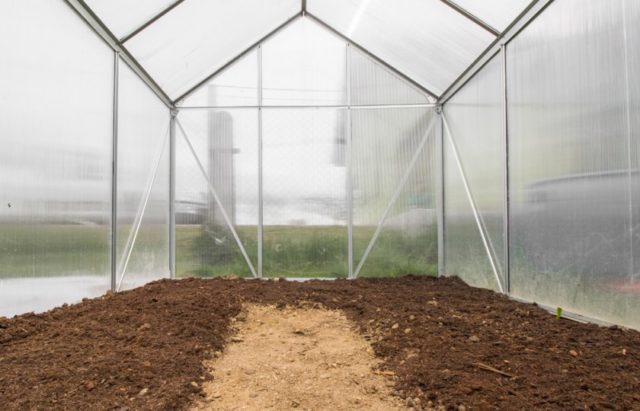 Both the harm and the benefits of sulfur bricks for polycarbonate greenhouses can serve as arguments for and against their use in equal measure. Everyone should make their own choice based on their own specific situation.