Disease treatment is the most important process in pre-winter greenhouse soil preparation. It is very important to treat the greenhouse from late blight in the fall in order to get a full harvest next year, not damaged by diseases. This processing can be done in several ways, but there are basic rules that must be followed. 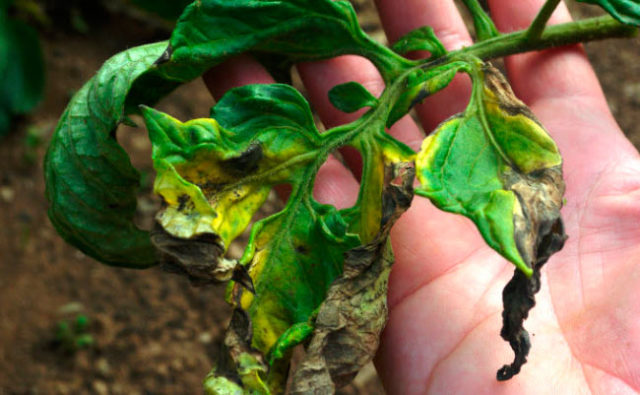 Signs of phytophthora in the greenhouse

Phytophthora - a dangerous disease that affects many cultivated plants, most often nightshade. Caring for a greenhouse in the fall after late blight requires serious efforts to prevent serious complications for the future harvest. After harvesting, late blight spores persist in the upper parts of the soil, where they can successfully overwinter until the next season. The first signs of this fungal disease are the appearance of brown spots on the leaves of cultivated plants, as well as white bloom with high humidity indoors.

If you do not fight the disease, then late blight can completely harvest tomato, potatoes and many other plants. Therefore, processing the greenhouse after late blight in the fall is very important in order to destroy all the spores that are in the closed space, as well as on its structure and in the soil.

Why is this disease dangerous?

The late blight fungus spreads over time to the entire crop. The leaves gradually turn brown, dry out and curl up. If the gardener is going to save the crop, he often removes green tomatoes from the bush and puts them to ripen. This doesn't really help, as the tomatoes in the box get infected with fungus just as much as any other fruit. If you do not process the space in the fall, then the mycelium of the fungus will also spread to the next harvest and the yield will decrease significantly, up to complete destruction.

How to process a greenhouse after phytophthora in the fall

Preparation for the new season takes place immediately after harvest. You can process it with special chemicals, as well as biological agents and temperature conditions. You can use both the proposed tools separately, and apply a complex effect. Soil tillage from phytophthora in the fall in the greenhouse, it is necessary in the form of a number of measures both to combat and to prevent the disease.

First of all, it is necessary to properly prepare the closed space after harvesting. Only after preparation can chemical preparations be used to combat the fungus. For chemical treatment, you should apply:

Each of the presented preparations is recommended to be used correctly to treat the greenhouse for the winter from late blight: 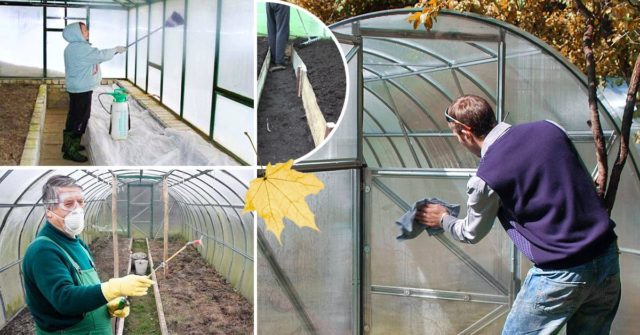 In addition to all known solutions, various universal fungicides are successfully used. They are used strictly according to the instructions that come with the fungicide when sold. The most common method is to cultivate the soil in a greenhouse in autumn with phytosporin. 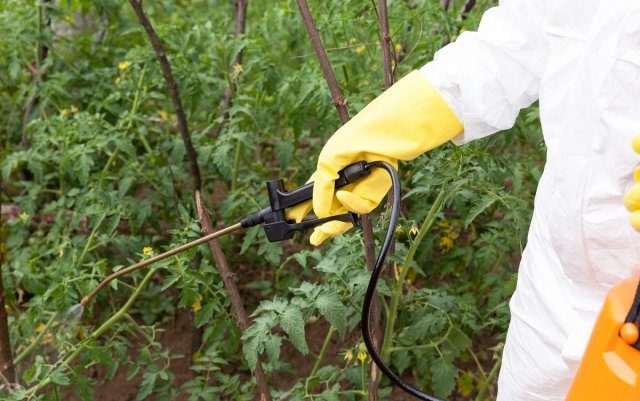 For small areas, biological fungicides can be used. These drugs are based on the natural ability to suppress pathogenic microflora. But these drugs have their own condition - they work only at temperatures of 12-14 ° C above zero.

The most commonly used drugs are:

The treatment consists in the fact that the drug is dissolved, according to the instructions, in water and the whole room is sprayed with this solution. After 14 days, repeat the spraying.

The best option for processing the soil is considered to be its change. This is a troublesome business, but it eliminates the fungus completely and for several years. Great for small spaces.

To carry out such a procedure, annually, sometimes 2 times a year, they remove 20 cm of soil, take it to a specially prepared site. On it, soil is mixed with dry leaves, and compost is also added. Each layer of this workpiece should be sprinkled with special solutions, for example, "Trichoplant". This soil can be used again in the greenhouse after 2 years. Only he will give a much larger yield and will not contain pathogenic microflora.

And also sowing siderates, for example, white mustard, in the fall before winter helps a lot. In the spring, mustard will rise and in one season it will disinfect all the soil in the greenhouse, since it will suppress all pathogenic microflora.

Processing a polycarbonate greenhouse in the fall from late blight also includes watering with a bright pink solution of potassium permanganate, followed by digging the soil onto a shovel bayonet and sowing siderates.

Temperature way to combat late blight in the greenhouse

Like many other biological species, the phytophthora fungus is able to live only in strictly defined temperature regimes. Therefore, to get rid of the pathogenic microflora, it is necessary to radically change the temperature regime in the greenhouse.

After harvesting, with the onset of frost and cold weather, it is recommended to clear the greenhouse from spores by freezing. To do this, it is necessary to open the greenhouse space for several days at the lowest possible temperatures. If snow falls, it is recommended to remove it from the soil surface, since zoospores can survive under a layer of snow and reactivate in spring.

And also the pathogenic microflora does not tolerate temperatures above 35 ° C. In the fall, such a temperature cannot be created for the greenhouse, and therefore it is good to process it with boiling water.

How to get rid of late blight in a greenhouse in the fall: a set of measures

In order to fully preserve your harvest for the next year, experts recommend treating the greenhouse in the fall with a set of measures. First of all, prepare the soil after harvest. To begin with, you need to remove all the tops, old foliage, as well as broken structures, the remnants of the twine on which the plants were tied.

After that, depending on the material from which the room is made, disinfection is carried out. You can use sulfur checkers, hydrated lime and other disinfection methods.

It does not hurt to treat the greenhouse with phytosporin in the fall, especially if the infection was large-scale.

Greenhouse care in the fall after late blight is excellent if store-bought fungicides are added to the ground, but the instructions and all proportions should be strictly followed so as not to harm humans. All spraying procedures should be carried out in a respiratory mask so that pesticides do not enter the respiratory tract. 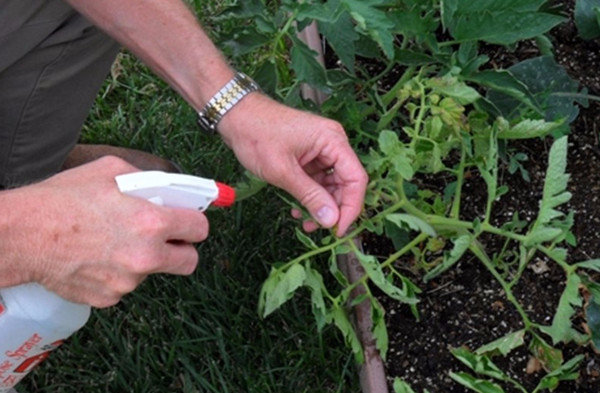 Prevention measures against late blight in the greenhouse

There are several rules, observing which you can avoid contamination with late blight of the crop in the greenhouse:

Subject to all the necessary preventive measures, as well as creating the correct microclimate, the gardener will be able to avoid the appearance of pathology and damage to the crop.