Processing a polycarbonate greenhouse from a whitefly in the spring: timing, control and prevention measures

Greenhouse owners often encounter a pest such as whitefly. This is a harmful insect that belongs to the aleurodid family. The fight against the parasite is characterized by a set of measures that must be carried out systematically. It is not so easy to treat a greenhouse from a whitefly in the spring. You need to know how to influence the pest, how and when it needs to be done and with what interval.

Why is the appearance of a whitefly in a greenhouse dangerous?

Whitefly harm comes from both larvae and adults. The pest has its own preferences: he loves tomatoes more than peppers and eggplants. Its appearance in the greenhouse can lead to the death of the plant in a matter of days. For example, the larvae suck out the juices from the plant, which are necessary for growth and development. Their number increases very quickly, the seedlings begin to weaken and eventually die.

Attention! Adults feed on pulp. In a few days, they can completely destroy the entire bush.

The pest is very small in size, as can be seen in the photo: 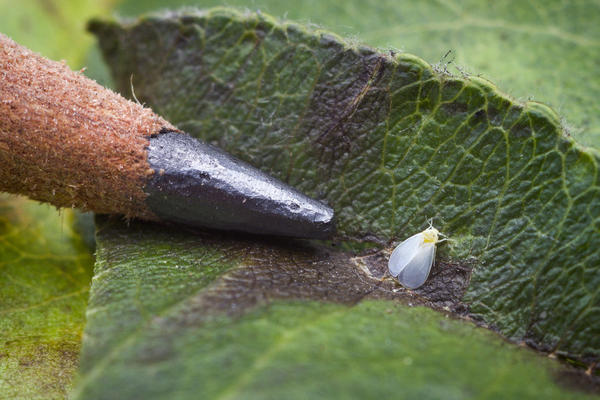 An individual representative cannot have a noticeable effect on vegetation. However, the whitefly always acts in a group: a group of pests appears immediately, which cannot be overlooked. Thousands of tiny white moths instantly attack plants.

Another danger is that the larvae secrete a sugary substance in the course of their life. Thus, they create ideal conditions for the appearance of soot fungus. It develops actively in this environment, a sticky black layer appears on the leaf, which leads to clogging of the stomata. The metabolism is disrupted, the leaves dry up and die off. 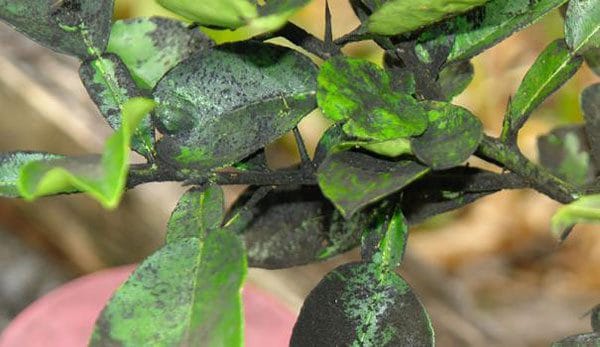 In addition, the harmful insect carries a large number of viruses. It can infect plants with various diseases, as a result, you will have to fight not only with the whitefly, but also with those ailments that it caused in the greenhouse culture. As a rule, in this case, the process of struggle increases in duration, and the seedlings recover much more difficult.

Whitefly control methods in a greenhouse in spring

It is very difficult to destroy the whitefly. In the same period of time, several stages of the pest live and reproduce in the greenhouse. Among them there are those who painlessly tolerate the effects of chemicals. That is why control methods are based on the use of comprehensive processing measures.

Attention! Adults easily endure wintering, hiding in secluded places or even in the ground. As soon as the soil and air warms up to the desired temperature, the moths fly out of their hiding places.

Among the methods of control, the following are used:

Each of the methods is aimed at destroying a particular stage in the development of the whitefly. So, for example, it is impossible to get rid of the larvae mechanically, but it can be done biologically or chemically. Therefore, in the fight against a pest, you need to use a set of different measures at once.

Handicraft products will help get rid of the pest. In order for the result to accurately pay off, it is better to use several different methods. One of them is the freezing of the greenhouse.

Even if it was possible to overcome the pests and harvest the crop in the first year, this will not be a guarantee that the whitefly will not appear again next year. In the form of pupae, they can hide in the ground for a long time. It is known that the whitefly dies at temperatures of -10 ° C and below. And so that in the following years you do not have to fight the same pest, you need to freeze the soil and buildings. To do this, it is necessary to carefully dig up the soil before the frost begins, and then at the time of cold weather leave the greenhouse open for two or three days.

Important! All soil should freeze well. If necessary, you can increase the number of days that the greenhouse will be open.

Spring processing of the greenhouse from the whitefly will be associated with the use of various infusions. A small number of aleurodids can be dealt with by flushing the leaves with warm water or soapy water. The procedure should be carried out several times a day. If the population has reached a large number, then garlic solution, infusion of yarrow, dandelion, tobacco infusion are used in the treatment. Such means can even affect plants that are already affected. 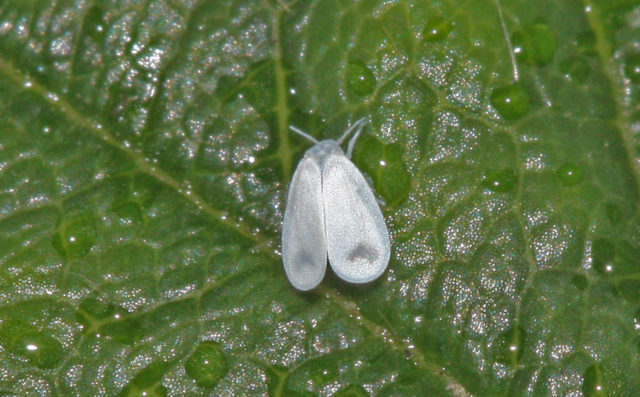 Video on how to destroy a whitefly with folk remedies:

Of course, greenhouse chemicals are not the best option. But nothing else helps, all that remains is to use insecticides. The advantage of such products is that they destroy the pest at all stages of life. The following drugs show good results:

The last drug on the list is considered a hormonal agent. The combined use of chemistry and a hormonal drug will help get rid of both the moth itself and the larvae with eggs. Thanks to this, the pest will be eliminated not for a certain period of time, but forever.

Biological and mechanical methods of control

The use of drugs based on chemistry in the fight against whitefly brings very good results. But they also contribute to the appearance of toxic substances in the fruits, due to which the vitamins in the fruits of the plant disappear. It is almost impossible to destroy the pest without chemicals, but it is possible to significantly reduce its number through biological methods.

The most common way is tobacco. You can fumigate with tobacco, use tobacco sticks, spray plants with tobacco infusion. 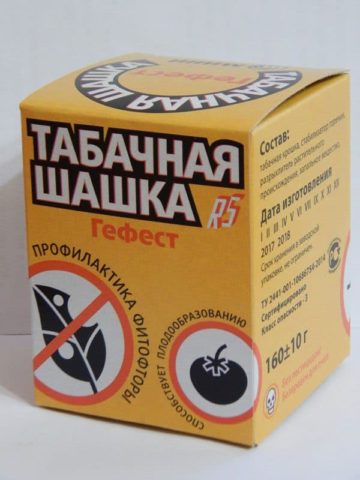 It should be noted that nicotine kills only adults.

Important! During processing with tobacco, drafts should not be allowed to appear in the greenhouse.

Modern biochemical means will also help in processing a polycarbonate greenhouse in the spring from a whitefly. They are completely safe for future crops. These include:

The biological methods also include the destruction of the pest with the help of other insects. The parasitic insect of the entomophage is actively used. It lays its eggs inside an adult whitefly. As the larva develops, the larva grows, and the aleurodida dies. It is necessary to launch the insect two weeks before planting the seedlings. 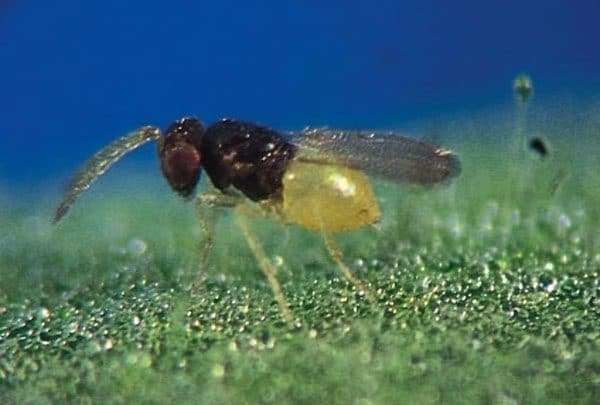 Another variant of the fight is mechanical.In this case, special pest traps are made. The bright yellow or blue color attracts aleurodids. You can use this feature as a basis for making a trap. It can be made from plywood, pre-painted in the desired color. Then it is necessary to apply a mixture of honey with rosin on it. The trap is attached to the holder and placed near the affected plants. 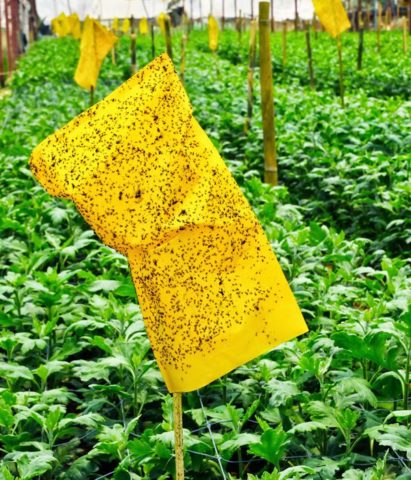 Also, bait traps can be purchased in special stores.

Another mechanical method is suitable in the early stages of midge emergence. It is very simple: the insect is knocked down with a water pressure from a hose, after which the stems and leaves are wiped by hand. Of course, this takes a lot of time, and it will be relevant only with a small number of whiteflies.

The easiest way to prevent the appearance of a whitefly is to deal with it. And for this it is necessary to carry out certain preventive measures, which include: 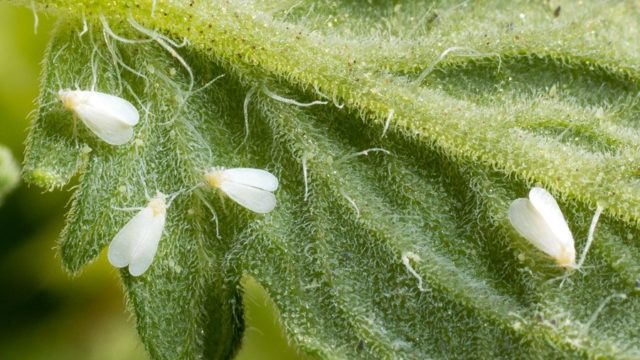 It is important to follow a few rules during autumn harvesting. First, all greenhouse soil must be deeply and well dug up before frost. Second, after the harvest is fully harvested, all plant residues are removed completely and burned. Third, there is no place for compost in the greenhouse. You can't place it right in the greenhouse: all pests can come from there. Both autumn and spring processing of a polycarbonate greenhouse from a whitefly plays an important role in the issue of prevention. If you follow all the instructions, you can completely avoid the appearance of the pest.

So, treating a greenhouse from a whitefly in the spring is not so easy. This requires a whole range of measures that must be carried out systematically. But the main thing is the result. If you use various methods in the fight against aleurodides, then over time you can achieve success. Of course, it is best to keep the pest out of the greenhouse. And for this, you need to follow simple preventive measures that will save you from further problems with the whitefly.