Do-it-yourself outdoor shower in the country with heating

A person who comes to the country to work in the garden or just relax should be able to swim. Best suited for this Summer showerinstalled in the garden. However, the weather can not always please with warm days, and the water simply does not have time to warm up in a day. The solution to the problem will be a built-in outdoor shower for a summer cottage with heating, which allows you to take water procedures in any weather.

With a very rare visit to the dacha, it makes no sense to build a stationary building for swimming. In this situation, a mobile shower bought in a store will help. The product is easy to bring in a bag to the dacha, and when you leave, take it with you. The simplest garden shower looks like a rubber mat with a foot pump mounted inside. The source of water is any container installed on the ground. Two hoses depart from the pump: one for water intake, and the other for supplying it to the watering can.

The portable shower works from trampling with feet on the rug. Inside the pump is a diaphragm, inlet and outlet valve. They pressed the mat with one foot - the inlet valve opened, and the membrane sucked water from the container into the pump. They stepped on with the other foot - the inlet valve closed, and the exhaust valve opened. Pressurized water went to the hose with a watering can. The mobile shower can be used anywhere in the country yard. Best on the garden lawn.

Advice! It is convenient to use a plastic bottle from a cooler as a container for water. Immediately upon arrival at the dacha, they put it in a sunny place. During the day, the sun heats up the water, and after lunch you can swim. 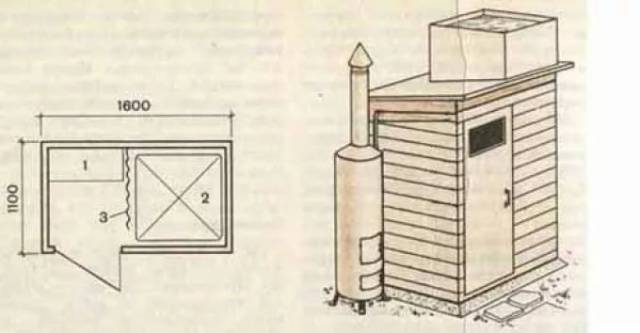 For the construction of a stationary warm shower for a summer residence, a project will need to be developed. Do not be afraid, there is nothing complicated about it. For the simplest construction, the usual scheme, drawn by hand on an album sheet, is suitable. The drawing indicates all the dimensions of the future shower stall.

Usually, when building a shower with your own hands with heating, they adhere to the standard parameters:

Advice! The changing room can be arranged in the dressing room. For this, additional racks are installed near the shower stall, onto which the tarpaulin is pulled.

Choosing a place to install a shower in the country 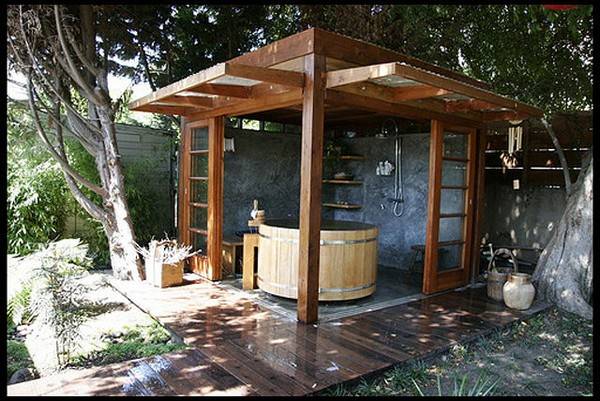 You can install an outdoor shower in any corner of the summer cottage. There are no special requirements for this building. With reasonable thought, no one will put a shower stall in the yard. It is better to do this behind the house or in the garden, because for the shower you will have to organize a small drain. It is advisable to place the booth in a sunny area to organize natural heating of water from the sun. In order to save building materials, a shower stall can be attached to any building on the south side.

If an outdoor shower in the country is installed as a separate building, it is advisable not to remove it from the house. After all, it is better to make a water tank with electric heating, which means that you will need to pull the wiring from the electric meter to it.

Preparing the base for the country shower


To build a shower in the country with their own hands, they begin with the preparation of the place where the booth will be installed. By the size of the shower house, they dig a depression of no more than 50 cm. The bottom of the hole is covered with a layer of sand 15 cm thick, and on top with the same layer of rubble. If you rarely use the shower or if there are no more than two people bathing a day, the base can be left in this state. The water will pass through the drainage layer and soak into the ground. 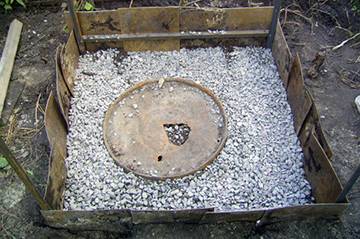 To organize large drains, it is necessary to drain into the cesspool, and the base must be concreted. Alternatively, instead of concreting, the floor can be made from an acrylic pallet. 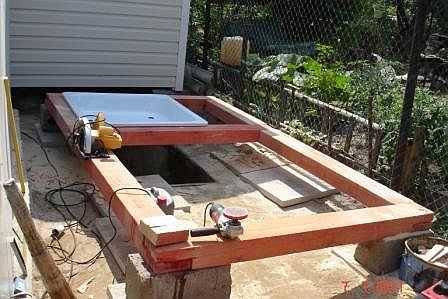 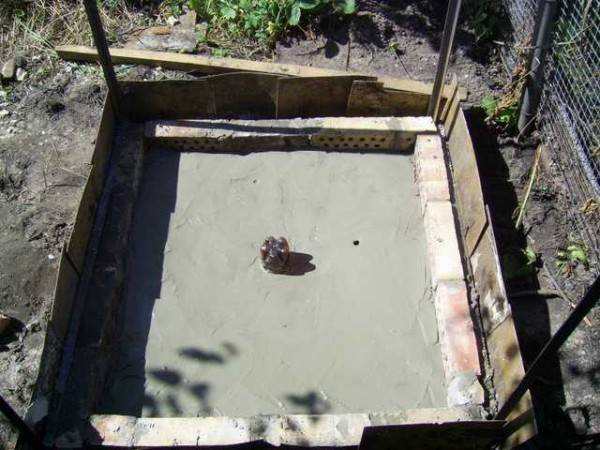 We build the foundation for a street shower in the country

Most often, a columnar foundation is built for a shower in the country. The photo shows options for arranging it from different materials. In any case, holes are dug under the pillars with a depth of at least 80 cm.The bottom is covered with a layer of sand and gravel 30 cm thick.Further installation of the pillars depends on the material used:

In any case, a stud with a protruding thread is embedded on each pillar. They are needed to secure the frame of the shower stall with nuts. All pillars should rise about 30 cm above the ground, and at the same level.

Advice! If the dacha is located on loose soil, the piles can simply be driven in by making them from a metal pipe.

Arrangement of a drain pit 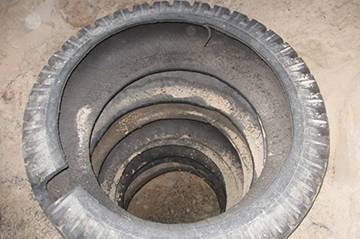 If many people swim in the heated dacha shower, the drainage floor will not have time to absorb a large amount of water. For drains, you will have to organize a cesspool. It is dug up to a depth of 2 m at a distance of at least 3 m from the shower stall. It is important to place the hole no closer than 5 m from the house and 15 m from the water source.

It is not necessary to build country cesspools for outdoor shower stalls from expensive materials. Optimal use of old car tires: 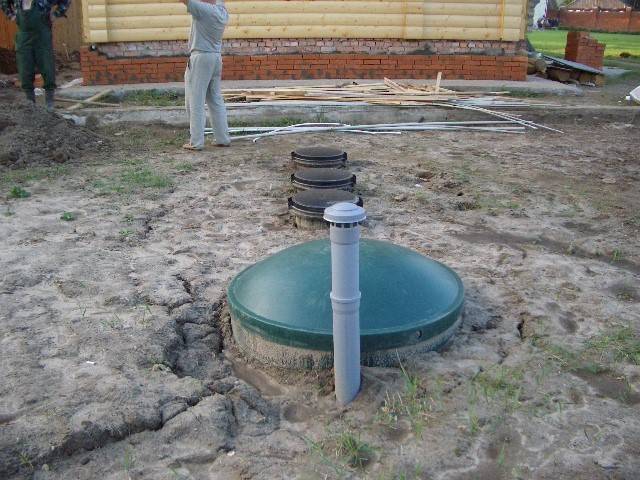 The cesspool for the shower is ready, it remains only to make a cover and attach a ventilation pipe with a cap to it.

We build a shower stall


They begin to build a country shower with heating with the assembly of the frame, and the frame of the lower strapping is assembled first. The frame can be welded from a steel profile, but it will be easier to use wooden blanks. So, the frame of the lower strapping of the country shower is knocked out of a bar with a section of 100x100 mm. After that, it is laid on the foundation, secured with anchor pins and nuts.

Attention! Between the frame of the lower trim of the country shower and the foundation, it is necessary to lay pieces of roofing material to protect the wood from dampness. 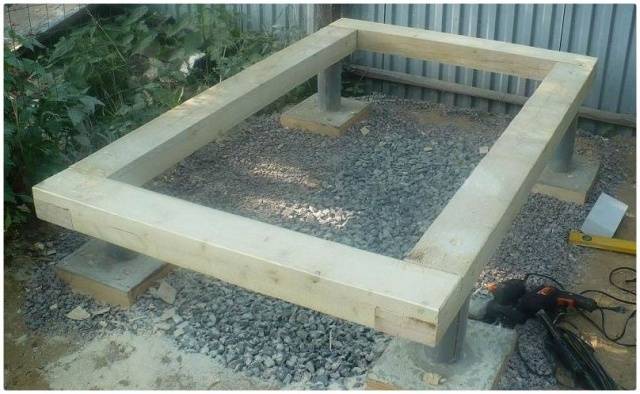 When the lower trim of the country shower is ready, they begin to install the racks.For their manufacture, a bar with a section of 100x50 mm is used. Racks are placed in the corners of the future shower stall, and two additional ones in front for hanging doors. The width of the doorway is optimally kept within 700 mm. 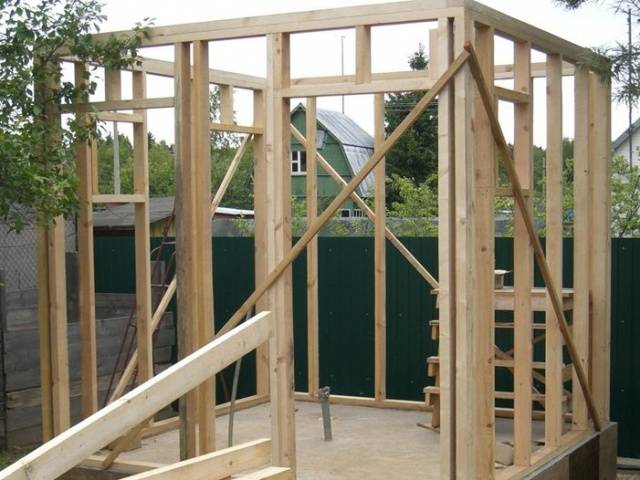 From above, the shower frame is fastened with a strapping made of a bar with a section of 100x100 mm. That is, they knock down exactly the same frame as for the lower strapping. Outside, the finished shower frame is sheathed with wooden clapboard. It is better to use plastic sheets inside, due to their resistance to moisture. The door is knocked down from a 20 mm thick board or bought a plastic one in a store. It is attached to the shower stall with hinges on the pillars of the doorway.

Advice! On the back wall of the shower stall, a ventilation window must be provided for steam to escape.

For swimming on cool days in the country, it is better to equip a warmed shower. Wooden cladding keeps heat well, but since there is space between the outer and inner finishing, it is better to additionally insulate the shower walls. This can be done with 10 mm thick foam sheets.

The roof of the country shower is made single-pitched, but in order to save money, a square water tank is used instead of a roof. A factory-made plastic tank is sized to completely cover the shower stall. Since we are building a warm shower in the country, then the container must be bought with heated water from electricity.

Tips for choosing a shower tank 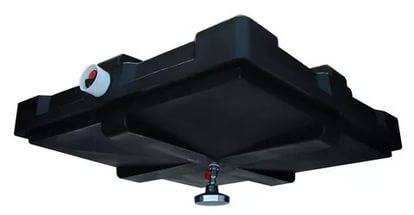 So, we figured out how to build a country shower stall, now we turn to its arrangement. Instead of a roof, there will be a square plastic tank. It is better to buy a container in black. In such a tank, water will not bloom. The dark color also attracts heat, so in sunny weather the water will be heated naturally.

In addition to the built-in heating element, it is better if the shower tank is equipped with a thermostat. It will help heat the water to the desired temperature, after which it will turn off the heating element.

Automatic filling of the tank with water 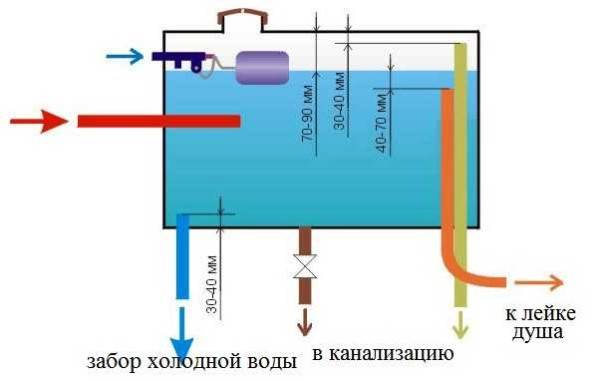 Pouring water for the shower into the tank is carried out manually with buckets from the stairs, but this is a very time-consuming procedure. It is better, according to the proposed scheme, to make autofill from a water supply system or a well. The water supply is connected through a float that will regulate its level in the tank. Two control drains are removed from the tank into the sewer. One pipe (brown in the diagram) is fixed at the bottom point of the tank to completely drain the water for the winter. The second tube (green in the diagram) is fixed at the top of the tank. Through it, excess water is drained in the event of a float breakage.

If you fix two more pipes inside the container in the same way (in the blue and orange diagram), then you can put a mixer in the shower. The orange pipe will supply hot water to the watering can, and the blue pipe will supply cold water. As a result, the mixer will make the water warm, just as it should for bathing.

The video shows an example of a heated shower:


Reviews of summer residents will tell about the positive qualities of using a heated shower in a suburban area.