How to keep pigs in winter

In winter, a pig loves to run out into the snow, frolic, poke his nose in the snow. However, such walks are short-term, not acceptable for all breeds. If the question as a whole concerns the keeping of animals in the cold, then here it is necessary to take into account many nuances.

Can pigs be kept outside in winter 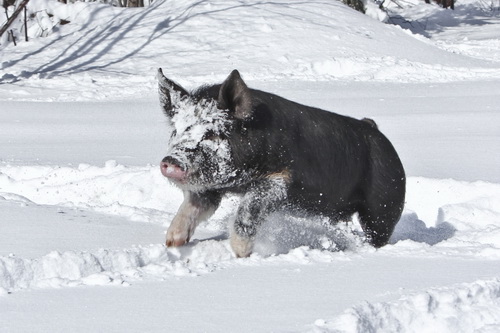 In theory, most domestic breeds are adapted to cold climates. Adult pigs tolerate frost, they can even burrow in the snow. On the territory of the Russian Federation, the cold keeping of pigs is practiced. However, the technology is applicable to fattening pigs. Sows and babies need a warm barn.

In almost all regions of Russia, except for the northern regions, climatic conditions make it possible to keep pigs of cold-resistant breeds in a cold pen. In order for animals to easily survive the winter, you need to create comfort for them. The entrance of the cold pen is covered with tarpaulin or other dense material. The curtain will close from the draft, reduce the loss of heat generated by the pigs themselves.

Important! Drafts are especially dangerous for pigs in winter. Animals can catch pneumonia.

It is good to raise the floor of a cold pig pen above the ground. The structure is installed on a columnar foundation or supports are made of railway sleepers. Raised pig pen will not flood melt, rain and groundwater. The floor and bedding will always stay dry. Smart solutions can help reduce the likelihood of drafts. If the walls of the pig pen are assembled from boards, all joints are sealed to the maximum. The entrance is cut from the side from which the wind blows less often. The roof is equipped taking into account a snug fit to the upper part of the walls. Snow and spray of rain will blow through the cracks left by the draft.

The complexity of eliminating negative consequences depends on the location of the corral, the composition of the soil on the site. For example, clay soils do not absorb moisture well. Water stagnates on the surface. If you put a pen for pigs on such soil, and even choose the bottom of the site, permanent mud will form all year round.

What temperature do pigs withstand outside in winter?

If we characterize animals in general terms, then it is impossible to accurately answer the question of minimum low temperatures. Each breed is adapted to specific conditions. If pigs are raised for a long time in harsh conditions, then each subsequent generation receives acclimatization. In order for the keeping of pigs in winter to give a positive result, when choosing a breed, it is taken into account what minimum temperature the animals withstand.

The following breeds of pigs are considered the most cold-resistant:

Good results are obtained from the Berkshire, Breit, and Gloucester spotted pigs.

If you decide to keep pigs in the cold in winter, it is not enough to choose the right breed. Animals must be properly cared for:

Babies born in winter are endowed with weak immunity. They try to vaccinate pigs earlier in order to protect them from diseases.

How to keep pigs in a pigsty in winter

By right, the pigsty is considered the best place for keeping piglets at home in winter, since the building 100% protects the animals from precipitation and other negative factors. Indoors, it is easier for a person to control the conditions for pigs, and, if necessary, change them. If the content takes place in a pigsty, open walking is imperative. Pigs need a place to frolic.

With the onset of cold weather, animals spend more energy on natural heating, and replenish it with enhanced nutrition. However, when pigs eat feed, fat is deposited heavily. This feature is directly related to the purpose of keeping the livestock and arranging the pigsty. If pigs are kept on lard, then the pigsty needs a small one that creates minimal mobility for the pigs. Meat breeds should not store a lot of fat. Pigs in the winter need a spacious pigsty with a walk. Playful animals will burn fat.

The difficulty of keeping pigs in winter is the additional work with the litter. Animals grow well and do not get sick if they are kept dry and clean. However, the pigs are sloppy. The owner will often have to change the litter in the pigsty in winter.

Advice! Modern deep bedding with beneficial bacteria makes it easy to keep pigs indoors. In addition, microorganisms that recycle organic waste generate heat, which is additional heating for a cold pigsty in winter.

Dry pigs and clean air inside the pigsty are supported by natural ventilation. The air ducts are taken out into the street, but they must be equipped with control dampers. The mechanism will allow you to control air exchange, reduce heat loss in winter.

In the video, the content of pigs on deep bedding:

What temperature should be in a pigsty in winter 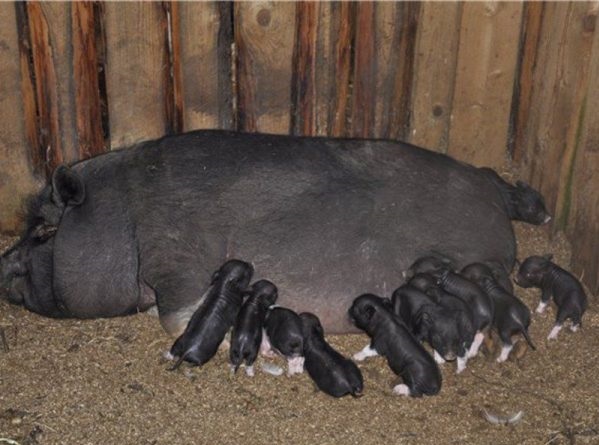 The temperature regime in winter is maintained different for each age of pigs. For adults and young animals older than 165 days, it is optimal to maintain from + 8 to + 15 aboutC. For young pigs, the temperature in the pigsty is favorable in the range from + 14 to + 20 aboutC. A sow with newborn babies is maintained at a temperature from + 20 to + 23 aboutFROM.

How to feed pigs in winter

After 15 days from the moment of birth, complementary foods are introduced into the diet of babies. Youngsters are given:

In winter, adult pigs are fed with feed enriched with minerals, vitamins, nutrients. Vegetables, hay, cereals are introduced into the diet.

Features of farrowing in winter 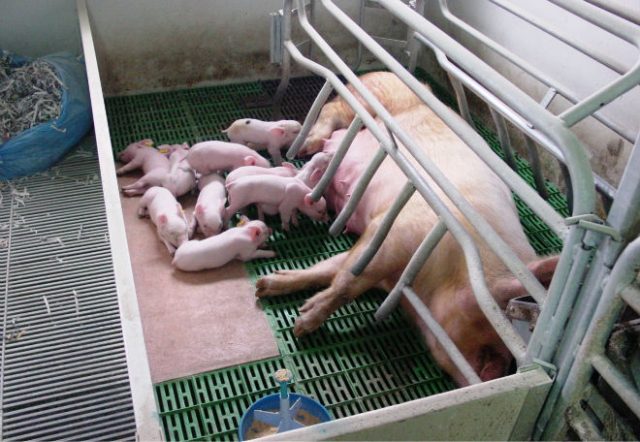 If the pig is suckled, and the temperature is below freezing in the barn, the litter and the sow itself will die. Cold is the main threat to adult animals from the udder. Sows develop mastitis in frost and wet litter. A disease in a pig is difficult to treat, it is easier to let the animal go to slaughter.

Before and after farrowing, the sow should not be allowed out for a walk in a cold pen in winter. Newborn babies are provided with plenty of dry bedding.Drink is given only warm, the cleanliness of the drinking bowls and feeders is monitored. The sow is given only high-quality feed. In addition, they comply with the dietary norm. The development of the young depends on the correct feeding of the pig, since everything that the mother ate is passed on to the babies with milk.

The pregnant sow is given:

Pig food should be fresh, not sour.

The temperature is constantly monitored. For heating, they include red lamps, IR heaters, and other devices.

Vietnamese pig breeds are now popular in many households. Animals are not capricious and unpretentious for winter keeping. Pig care is similar. The pregnant sow is provided with warmth. To keep small pigs in winter, a lot of bedding is poured in a warm pen. Young animals are pierced with preparations containing iron. Useful additives to feed are fish oil, bone meal, chalk. Vietnamese pigs are given coal to gnaw, chopped hay is poured into the feeders. Piglets are fed in winter three times a day.

How to keep piglets in a cold shed in winter 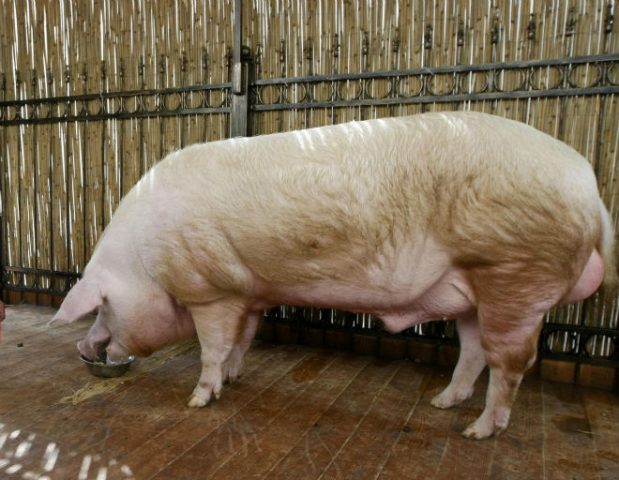 Having a cold shed is better than keeping pigs outdoors, but the premises must be prepared. Compliance with the technology itself is important. A hangar is often a cold shed for pigs. The structure consists of a frame, where the awning is the simplest shelter. This pig keeping technology has many supporters and opponents. A plus is the simplicity of the design, the minimum cost of its construction. The downside is the high feed consumption. In a cold shed, pigs spend a lot of energy on their heating, and replenish it through high-calorie food.

No matter how well the awning is stretched, the heat loss will be huge. A thick layer of litter acts as heating for pigs. It is changed 3-4 times a month. However, with increased feeding of pigs, the amount of organic waste increases. The litter becomes clogged with manure faster, worms and dangerous microorganisms are bred inside. When animals eat or scavenge in mass, the parasites enter the body. Infectious and fungal diseases of pigs occur. Do not use bio bedding in a cold barn. The beneficial bacteria will simply die in the cold.

Building a cold barn reduces costs, but increases the labor cost of caring for pigs. Sows and young animals cannot be kept in hangars, they need warmth. However, according to farmers who have tried the technology, pigs raised in a cold barn are more hardened. The body of animals resists dangerous diseases.

How to keep piglets warm in a cold barn

First of all, the comfort of pigs in winter inside a cold barn is ensured by eliminating drafts. Leaving gaps is unacceptable. For the hood, equip natural ventilation.

On the floor side, animals receive warmth in winter from a thick layer of litter. The ongoing process of rotting organic matter is negative for pigs in terms of sanitation, but it has its advantages. Putrefactive microorganisms similarly generate heat, which is additional heating.

If sows and young animals are supposed to be kept, special houses are placed inside the cold hangar. The pigs are equipped with electric heating. Removable cages are attached to the houses to help feed the young.

The pig should be kept in a comfortable environment in winter, even if the breed is cold-resistant. Violation of the technology will lead to overconsumption of feed, obtaining a weak increase.