How to make a shower in the country with your own hands: step by step instructions

At first glance, building an outdoor shower in the country is a simple matter. I put a booth behind the house, a tank with water and you can swim. However, everyone thinks so until it comes directly to the construction itself. Here, questions immediately arise with the selection of material, the organization of drainage and water supply, the correct determination of the dimensions of the shower house. To quickly deal with these issues, we propose to consider step-by-step instructions on how to build an outdoor shower for a summer residence with your own hands and bring communications to it.

Drawing up a drawing of a summer shower


The simplest garden shower consists of one bathing stall. To build a house, you do not need to create complex drawings. Most often, they adhere to the standard sizes 1x1x2.2 m, as shown in the photo. It is impossible to build a shower stall below these parameters. After all, about 10 cm in height will take the pallet under your feet, and even a watering can hang from the ceiling about 15 cm. A booth that is too high is also not needed. There will be problems with pouring water, and it will be difficult for a short person to reach the tap installed in front of the watering can. 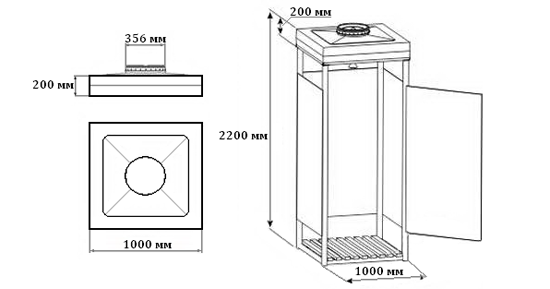 If you have the desire and the means to build a shower with all the amenities, you will have to approach the drawing up of the diagram more carefully: 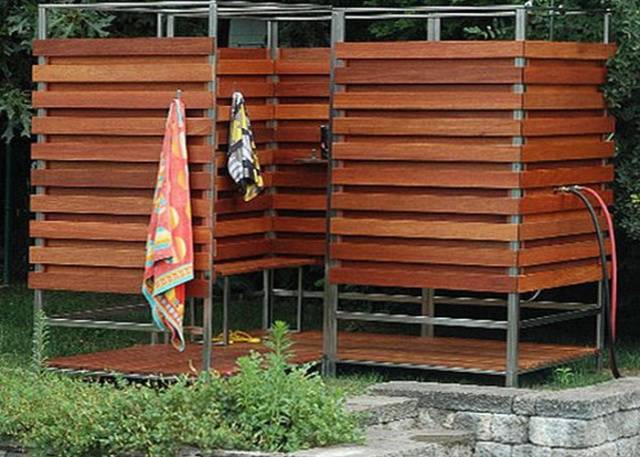 The scheme of the shower house should display all the little things, including hooks for clothes, shelves, mirrors, etc. If the shower is designed for a large number of people, the drawings show the passage of the sewer and the location of the drain pit.


Garden shower cubicles are lightweight, but bear in mind the weight of the rooftop water tank. In order for the house to stand securely, a foundation is built under it.Let's find out how to build the simplest foundation for a shower stall:

When the foundation for the shower is completely ready, they begin to arrange the sewage system.

Organization of water drainage in the shower stall 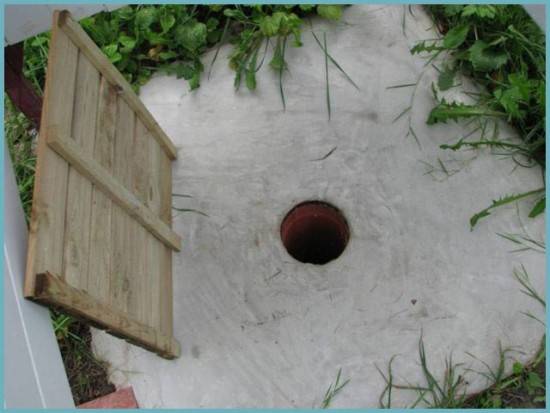 In the shower for a summer residence, the method of organizing the drainage of dirty water depends on the type of soil, the type of foundation and the number of people living. If the foundation is made in the form of a monolithic slab, then a plastic pipe with an elbow is laid before pouring it. The plate is poured so that there is a slope on all sides towards the drain hole. The sewer pipe is taken outside the booth and connected to a common sewer system or fed to a drainage well.

Advice! To make a similar drainage system in a shower, standing on a different type of foundation, it is not necessary to concrete the floor. You can buy an acrylic shower tray with a ready-made drain and make a floor out of it.

A built-in shower with a drain connection is ideal for a large family. After bathing, there will be a large amount of dirty drains and they will not fit in a small pit near the shower.

When the shower is for 1-2 people, the drain can be arranged directly under the booth. However, this option is suitable for summer cottages with loose soil. Let's say the shower stall is on a pile or columnar foundation. You can do this on a tape base. Inside, soil is selected with a depth of 50 cm. Half the hole is covered with any stone or gravel. The second part is covered with fine gravel to the ground level. When the shower stall is ready, a pallet from a wooden lattice is placed on the rubble. Wastewater will be absorbed into the soil, passing through the drainage layers. 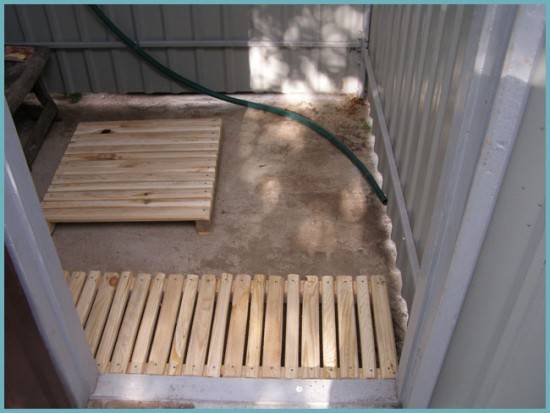 Sometimes summer residents simply lead the pipe from the shower into the garden. Not a very good solution, but if you do this, then the place where the water is drained should be warmed up by the sun.If the water does not have time to evaporate in a day, over time, you will get a swamp with frogs and a cloud of mosquitoes around the shower.


Now we will look at how to make a shower in the country from different building materials. In each case, step-by-step instructions and a detailed description of the work performed will be presented. 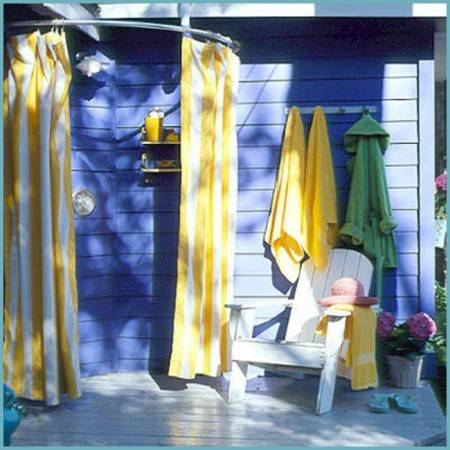 A little trick will help you save money on building a shower house. The fact is that a blank wall of any building can serve as a booth. Better yet, if it is the inner corner of the L-shaped building. A small water tank with a watering can is attached to the wall of the building. Various shelves, hooks and other devices are also attached here. A semicircular partition is fixed on the top of the wall and, with the help of rings, a curtain made of an opaque film or tarpaulin is hooked.

The floor must be equipped so that the water flows away from the foundation of the house. It is optimal to concrete the site or install an acrylic shower tray.

Construction of a wooden shower house 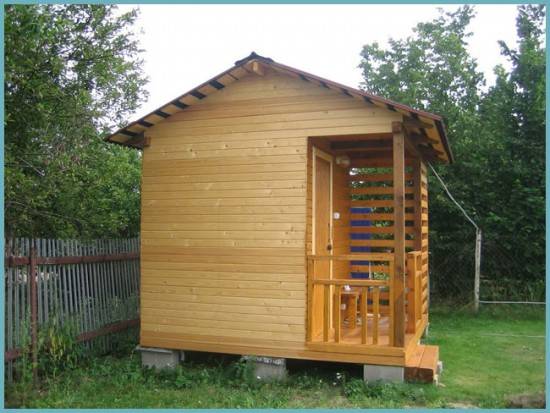 In this photo, a shower in the country is presented in the form of a wooden house. This is the most common structure. The wood is easy to process and keeps warm well in cold weather.

The procedure for erecting a wooden booth consists of several steps:

The finished shower stall is opened with colored varnish, and the door is covered with foil from the inside. Otherwise, the wood will swell from the ingress of water, and it will be difficult to close the door.

Shower cubicle made of polycarbonate 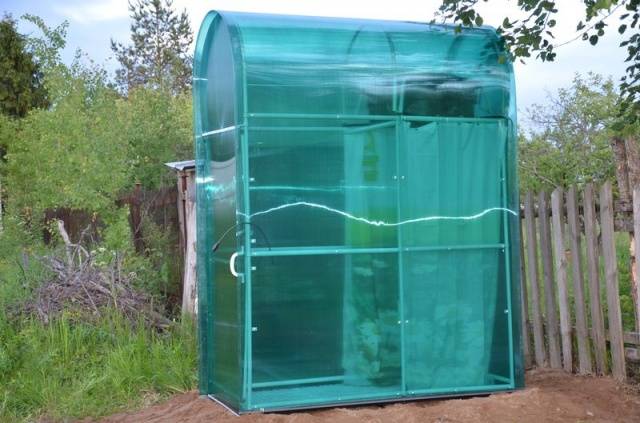 Now let's take a look at how to make an outdoor shower with beautiful polycarbonate lining. For a shower house, you will need to make a similar frame only not from wood, but from a metal profile with a section of 40x60 mm.

Important! The wooden frame does not go well with polycarbonate due to the ability of both materials to "play" at temperature changes, and wood, in addition, reacts to changes in humidity.

The principle of making the frame is the same as the analogue of a wooden shower stall. All the same racks with jumpers, only metal and they need to be welded. By the way, such a shower frame can be welded separately, and then put on the foundation and secured with anchor bolts. Another method of manufacturing a metal frame is based on concreting the racks in the foundation. Next, there is a strapping of the upper jumpers and spacers. 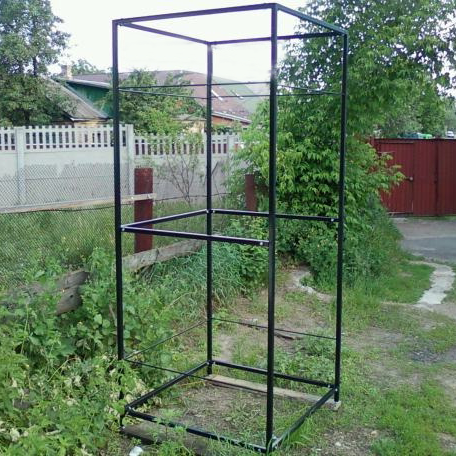 The video shows an example of a polycarbonate shower:

Shower house made of corrugated board 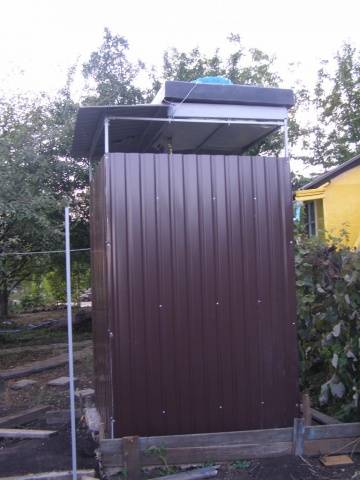 Now we will find out how to make a shower in the country with our own hands from sheets of corrugated board.It should be noted right away that this version of the shower stall is in greatest demand among summer residents.

So, any of the considered frames is suitable for corrugated board: wooden or from a metal profile. The only difference is that the frame is reinforced with additional jumpers to give it rigidity. After all, the corrugated board is very soft and without jumpers the shower stall will "play". The sheets are screwed to the frame of the house with galvanized self-tapping screws with a rubber washer. For aesthetics, they are matched to the color of the corrugated board. 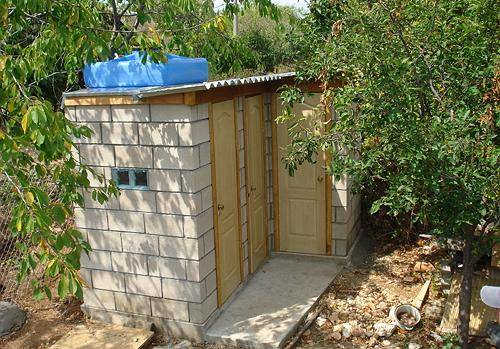 The brick walls of the shower house are laid out on a strip foundation or a concrete slab. In the process of masonry, a box for doors and windows is installed. For a dacha shower, it is enough to drive out the walls in half a brick. On the last row, jumpers from a wooden bar are embedded in the masonry. A roof and a water tank will be attached to them.

The shower door can be bought ready-made from plastic or knocked down from boards. It is optimal to weld a frame from a profile and sheathe it with corrugated board. It is advisable to install the window frame on the hinges. This will make it possible to arrange ventilation inside the shower stall.

Installing a tank on a shower and water supply 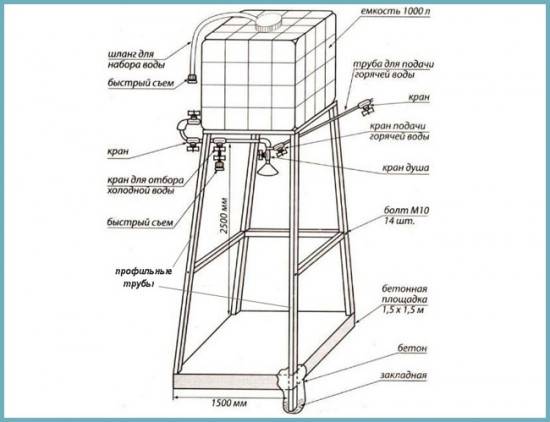 The end of the shower is the installation of the tank. You can make it yourself from any plastic or stainless container. To do this, a hole with a diameter of 15 mm is drilled in the bottom, and a piece of pipe about 30 cm long with threads at both ends is fixed with nuts. In the roof of the booth, a hole is cut in the center for a branch pipe. The tank is installed on the roof of the shower house so that the branch pipe comes out through the hole under the ceiling inside the cabin. A faucet and a plastic watering can are screwed onto the free threaded end. The tank is fixed to the frame of the shower stall frame, filled with water and covered with a lid. 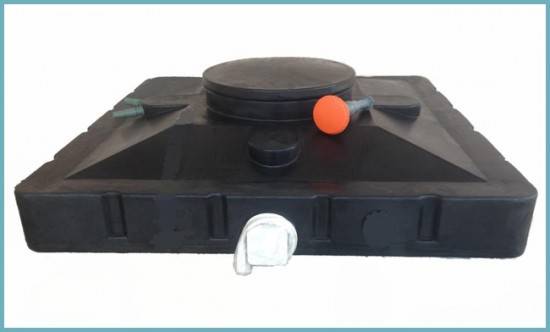 If you buy a store tank, the kit will already include a watering can, a tap and all the fasteners. The capacity will only remain to be installed on the roof of the shower house and filled with water.

If a heating element is installed inside the tank, then the water can be heated during the cold time of the day. However, one must remember about security measures. To avoid electric shock when bathing, the heating element should be disconnected from the mains. 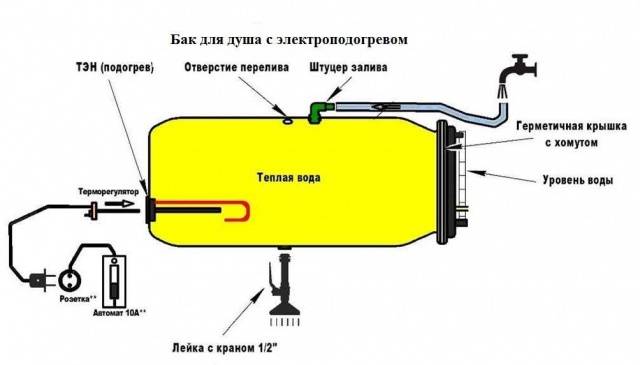 The video tells how to build an outdoor shower:

Building a shower in the country with your own hands is not so difficult. You just need to prepare a diagram, purchase material and slowly get the job done.