It is generally accepted that in order to get a good harvest of vegetables, it is necessary to put a lot of effort into caring for the garden. Digging the soil twice a year, weeding and loosening takes a lot of time and effort from the farmer. But what if there is always not enough time and such traditional worries become a burden? But there is a completely simple solution to such a problem - beds for lazy owners. So called Beds-boxes do not require deep digging, protect vegetable plants from encroachment weed herbs, facilitate watering and loosening. An example of creating boxes, the advantages of using them, as well as a description of other technologies for creating lazy beds are given below in the article.

Framed ridges can be low or high. It is worth noting that the second option is more convenient to maintain, therefore, it is he who is more often preferred by farmers. Box beds allow lazy owners to grow an excellent harvest of vegetables without much time and effort. 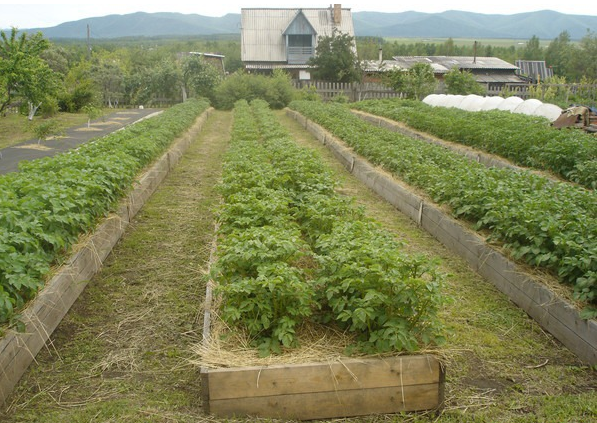 Recently, lazy beds have become more and more popular. They are preferred by beginners and already experienced farmers. Lazy bed technology has become widespread due to a number of characteristic advantages:

Among the disadvantages of lazy beds, it is worth highlighting the need to use some materials to create the box, as well as the one-time labor costs during the construction of the structure. 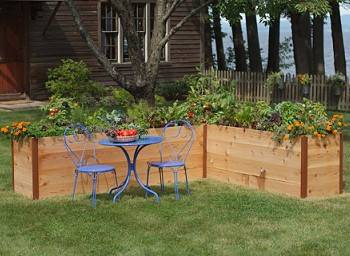 The first step in creating lazy beds is to build a box. Its parameters may be different, however, the width of the ridges should not be more than 120 cm, as this may complicate its subsequent maintenance.

The sides of a lazy bed can be made from scrap materialse.g. old bricks, leftovers slate, logs, boards. The building materials market also offers special curb tapes and shields, however, their purchase requires additional cash costs.

The box is filled with layers:

The thickness of each layer should be at least 15 cm. It is recommended to make a layer of fertile soil at least 20 cm thick.

Important! If moles and rodents parasitize in the garden, then a metal mesh with a fine mesh should be laid on the bottom of the box, which will provide protection from pests. 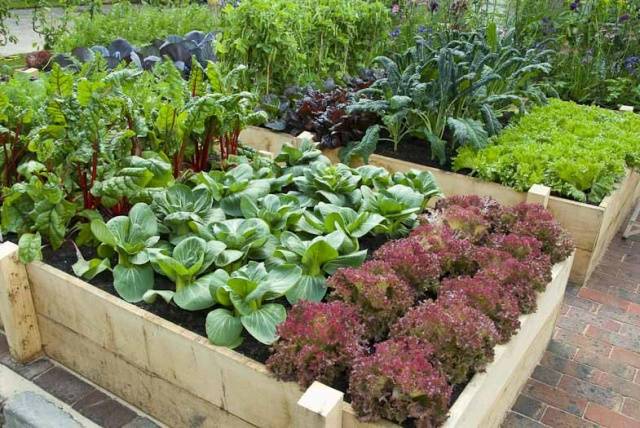 You can create lazy box beds in both spring and autumn. At the same time, the spring beds require the introduction of special bacteria, which will contribute to the accelerated decay of the laid grass. The source of such bacteria can be the drug "Baikal-M". The beds created in the fall do not need the use of special bacteria. The decay process occurs naturally during the autumn-spring period. In order for the autumn beds to be suitable for growing vegetables in early spring, they must be covered with black polyethylene for the winter.

You can use high ridges for growing absolutely all crops, be it cucumbers, tomatoes, root vegetables or strawberries. Also lazy the beds can be mixedplanting different plants in one box. 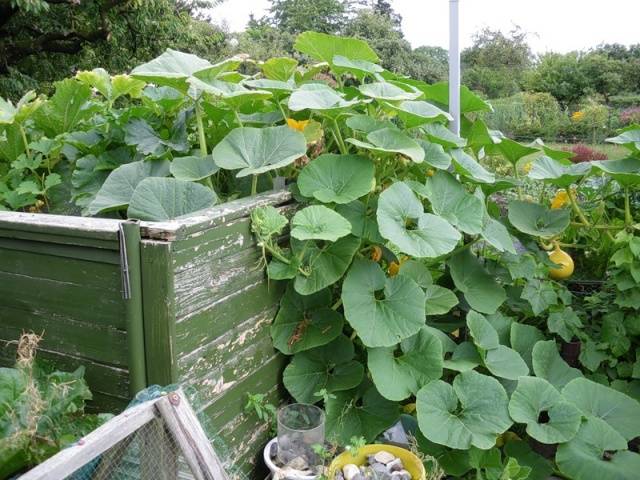 Box beds are really a great option for lazy and busy owners who do not want to spend a lot of time and energy growing vegetables, but do not mind enjoying burying their crops. So, having taken care of creating the boxes once, you can forget about digging the earth for several years. Weeding of such high ridges is extremely rare, because the soil is protected from the neighborhood with weeds and is inaccessible for self-sowing seeds. During weeding, you do not need to bend low, which means that even an elderly or ailing owner can take care of the beds. Detailed information on how to create such comfortable beds in your garden can be found in the video:

Another option for creating beds for lazy owners allows you to get rid of weeding. It consists in the fact that the free space in the beds is covered with a solid, opaque carpet. 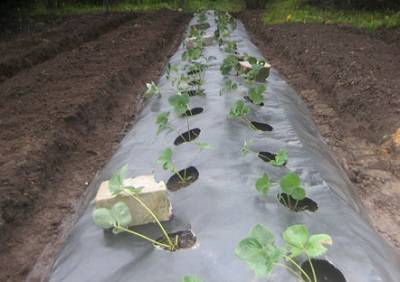 The technique for creating such lazy beds is quite young. More often it is used by experimental farmers, however, this method of cultivation has already received a lot of positive feedback, which means it deserves attention.

The advantages of this method include:

Among the disadvantages of the technology, it is necessary to highlight the financial costs of the material, the complexity of watering.

On lazy the garden bed can be grown any crops, including tomatoes, cucumbers, zucchini, root vegetables. You can create such unique ridges by performing the following steps:

In more detail, the technology for creating lazy beds is shown in the video:

Photos of beds for lazy owners can be seen below. 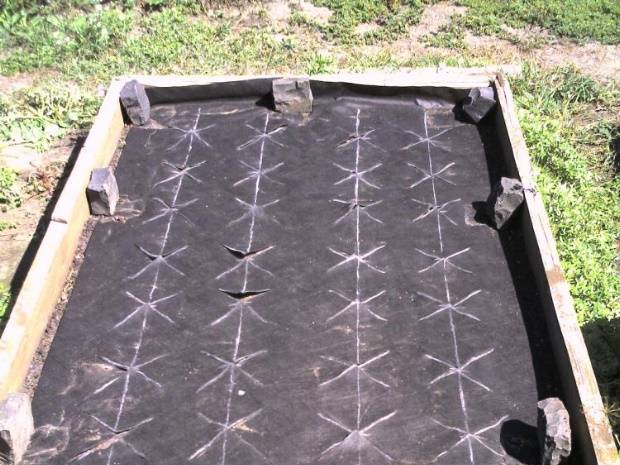 A favorable temperature and high humidity are maintained under the film, carpet throughout the entire growing period. The resulting condensation regularly moistens the soil and allows the layer of grass and leaves to rot, turning into a natural organic fertilizer.

It is necessary to water the plants pointwise at the root. Loosening should be done as needed.In the absence of sunlight, the weed does not grow under the film, which means that there is no need to weed the ridges.

Important! Conditions with high temperature and humidity allow vegetables to ripen several weeks ahead of schedule. 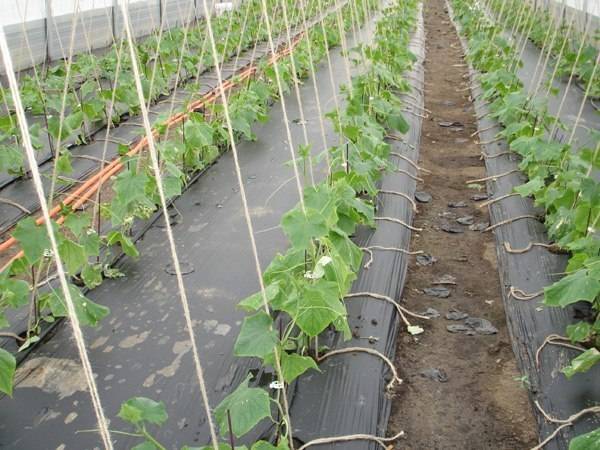 Each farmer can independently choose the option of creating lazy beds. So, with a little time you can make beautiful high beds-boxes, which will allow you to get a bountiful harvest with minimal maintenance. In this case, the beds can become a real decoration of the garden. The ridges under the shelter, of course, do not look so gorgeous, but they do not require special skills and a lot of time to create them. Moreover, each option has a number of its advantages, which means that it can be used

Recommended entries
How to make a garden bed from improvised means
Do-it-yourself warm beds: step by step production
How to make wooden beds with your own hands
Garden beds made of polymer coated metal
Narrow beds according to the Meatlider method
How to make a bed of plastic bottles
How to make French garden beds with your own hands
How to make a strawberry bed
Vertical bed for strawberries from a pipe
Lunar
calendar 2021
January February March April May June July August September October November December
Recommended entries
Low-growing late tomatoes
Low-growing flowers for the garden, blooming all summer
Wireworm in the garden: how to deal
What grass to sow so that weeds don't grow