The gooseberry sawfly (Latin Nematus ribesii) is one of the most dangerous pests of gooseberry and currant bushes. If you do not fight the sawfly on the gooseberry, carrying out the recommended agrotechnical measures, then the loss of yield and the death of plants will be inevitable.

There are two types of pest: yellow gooseberry sawfly and pale-footed:

In the larval stage, sawflies resemble their relatives, but, unlike them, they have not 8, but 10 pairs of legs. Experts call gooseberry sawfly larvae false caterpillars. The color of the yellow sawfly larvae is bluish-green, the insects are covered with black growths, similar to warts, which grow up to 18 mm in length. Moreover, in a black sawfly they are smaller, no more than 1 cm, green.

At the end of summer, the larvae go into the ground under the bushes to a depth of 6 - 12 cm, where they pupate and winter safely. With the arrival of spring, adult insects appear from pupae, their active phase coincides with the beginning of flowering of red or black currants.

During this period, the young leaves of the gooseberry are just beginning to unfold, and the females of the sawfly begin to lay eggs, cutting small depressions along the main vein of the leaf. Each female lays up to 60 eggs on the underside of the leaves.

In cuts - "pockets" sawfly larvae quickly appear and grow. First, they gnaw through small holes, and then completely destroy the leaf blade. The sawfly larvae have five growth stages, each lasting 20 to 25 days. Then the insects fall to the ground and pupate. This is the first, spring generation of the sawfly pest.

In total, 3-4 generations of the sawfly manages to develop on gooseberries over the summer in central Russia. The last generation leaves for the winter, the cocoon of which is denser and darker than the summer one. Gooseberries need regular inspection of their leaves, since the fight against the sawfly should be started as early as possible.

What harm does a gooseberry sawfly do?

Yellow and pale-footed gooseberry sawflies literally gnaw the leaves of gooseberries and currants, leaving only veins. They harm crops, being in the larval phase. The second - fourth generations, that is, summer representatives, are especially gluttonous and dangerous. Removing the first layer of the parasite is not easy, but fighting the second and third generations takes even more time and effort. 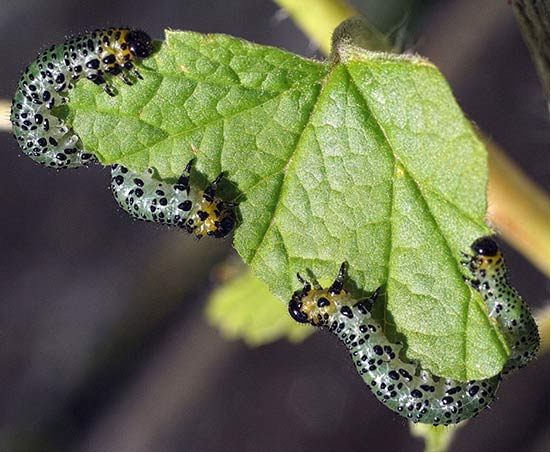 The first generation usually goes unnoticed by gardeners. The first eaten leaves dry up without having time to grow, and the fight with the sawfly is not carried out. However, the first generation, missed and not destroyed, gives life to the second, which already causes much more harm to the gooseberry.

The second generation takes off before the berries ripen, in the middle of summer. It is the most numerous and causes the most significant harm. It happens that the fight against him starts too late. Insects attack currants and then move on to gooseberries.For one to two weeks, the bushes can be left without leaves, which weakens the plants, reduces growth and winter hardiness.

Due to the defeat by the sawfly, small, prematurely falling berries are formed. Strong colonization by a pest reduces the productivity of the bushes in the current year and does not allow the formation of a future crop. Having noticed the signs of the sawfly's presence, you need to immediately begin the fight. The third and fourth generations are smaller and develop mainly on gooseberries.

The harm from sawflies to gooseberry bushes can be enormous if you do not fight and let things go. The bushes should be inspected regularly in order to take timely measures and prevent pests from multiplying. The gooseberry sawfly damages the gooseberry with foci, nests. The number of pests in different years is more or less.

If such insects are found in a summer cottage, an urgent need to take control measures. Moreover, if you know the description and photo of the enemy of currants and gooseberries "in the face". The next year, the complex struggle should be started in early spring. This will significantly reduce the subsequent summer hassle of fighting the gooseberry sawfly.

Photo of a gooseberry sawfly: 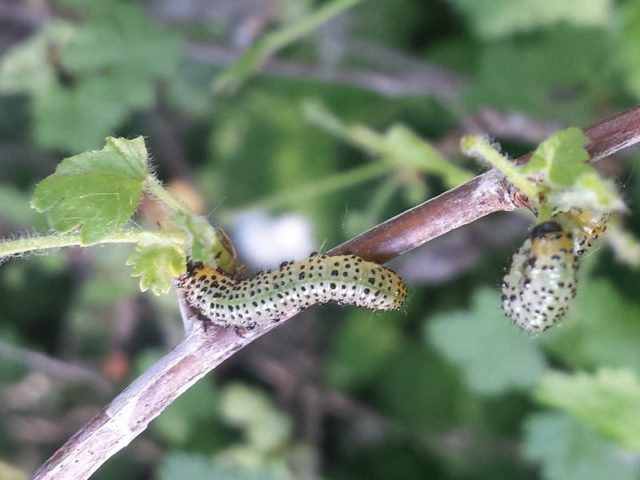 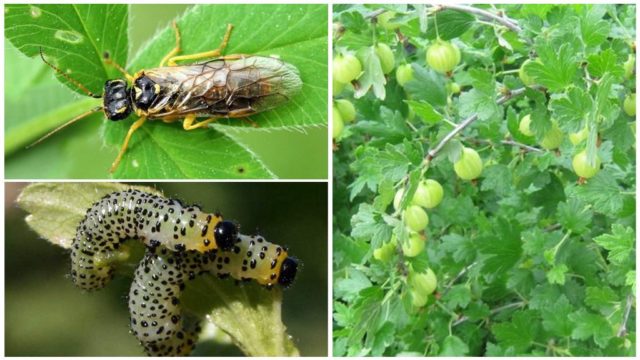 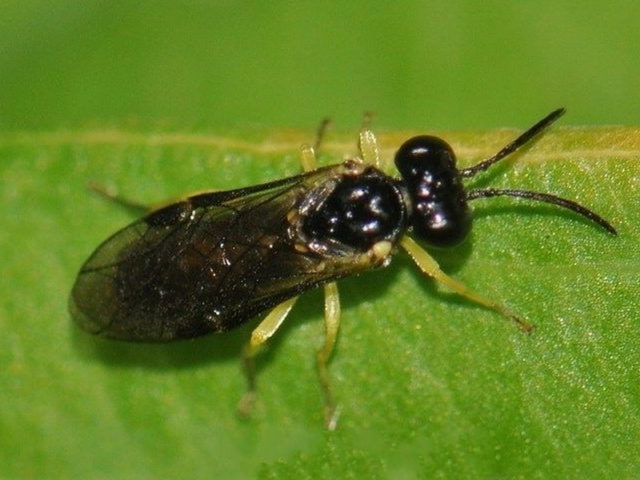 The methods that have long been used by the people are very good at destroying the larvae of sawflies, and at the same time - and other pests of the product. These are mostly infusions or decoctions. For their preparation, substances and plants that are harmless to humans are used.

Folk methods are good because they can be used at any time: during flowering, pouring and ripening berries. They do not kill beneficial insects, do not interfere with pollination. You can eat berries sprayed with folk remedies on the same day. They just need to be rinsed well.

In addition to the protective effect, many folk remedies are at the same time feeding gooseberries. Due to this, the immunity of plants increases, they grow better, become stronger and are less affected by pests.

Such treatments can be repeated after 7 - 10 days, if necessary, more often. It is useful to alternate the treatment with ash and herbal infusions. Fixed assets used:

How to destroy a gooseberry sawfly with chemicals

Chemicals should be used in the garden in critical cases, because some of the chemical gets into the berries.

During the period when buds appear on currants and gooseberries, they are sprayed with karbofos.To do this, take 75 g of powder per 10 liters of water.

Attention! Poisons should not be sprayed on flowering plants: this will kill the pollinating insects of bees and bumblebees.

Chemicals can be processed in the evening and morning hours. At this time, the activity of beneficial insects-entomophages (ladybirds, hoverflies), which eat the larvae of pests, is reduced.

To prevent the plants from getting chemical burns, in dry weather they need to be watered before spraying.

Among the mechanical methods of dealing with the gooseberry pest, the following have proven their effectiveness:

Each pest recognizes "its prey" by smell. Preventive methods of dealing with the gooseberry sawfly are aimed at scaring away the parasite or "confusing it." To prevent insects from smelling an attractive plant for them, plants with sharp, interrupting aromas are planted around currants and gooseberries. Alternatively, you can place the source of the interrupting odor in a jar next to the bushes. Plants and substances that repel pests include:

Traps with pheromones are an effective method against the sawfly: substances that, on the contrary, attract sawflies. Moving to the attractive smell, the beetles fall on the adhesive tape, from which they can no longer peel off.

Advice! Digging up soil under plants, collecting and burning dry branches and leaves in the fall will also have a pest prevention effect.

It is necessary to fight the sawfly on the gooseberry promptly, paying attention in time to the first signs of the appearance of the pest - the first leaves of the bush eaten by its larvae. After that, it is important to choose suitable control methods - folk or chemical plant protection products. The gooseberry sawfly is a very dangerous pest of currants and gooseberries, due to which the gardener can completely lose the harvest of berries.