How to get rid of a wireworm

Gardeners have two serious enemies that can nullify all efforts to grow crops. One of them specializes in tops, the second on spines. Both pests are beetles. And the second is much more dangerous than the first: the Colorado potato beetle. Although the Colorado potato beetle has very few natural enemies on the Eurasian continent, its distribution is limited by climatic conditions.

The second beetle, numbering more than 10 thousand species, united by the common name "clicker", is distributed all over the world. It was found even at an altitude of 5 thousand meters above sea level. 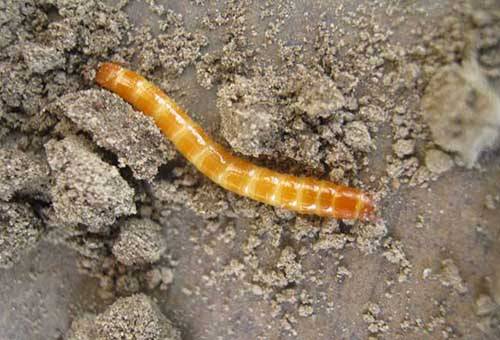 The beetles got the name "clicker" for their ability to jump. In this case, the insect makes a characteristic sound: a click. On a note! Thanks to the ability to jump, it is possible to determine that it was the clicker who was trapped in the garden.

It is enough to turn the beetle over onto its back. If it is a clicker, then it will return to its normal position with this characteristic click.

The ability to identify the click beetle is not at all superfluous, since, unlike the Colorado potato beetle, click beetles are not cosmopolitan, and each species lives in its own range. Therefore, the appearance and size of the clickers are very diverse. Beetles can be from 1 mm to 6 cm. In common they have only the ability to jump, which they use to avoid danger, and the characteristics of the larvae, nicknamed "wireworms". 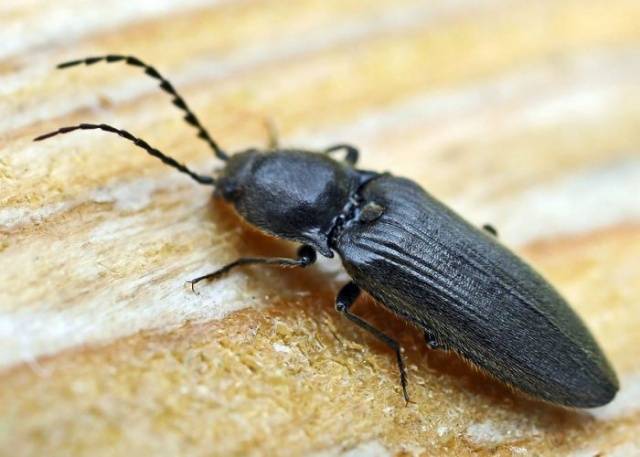 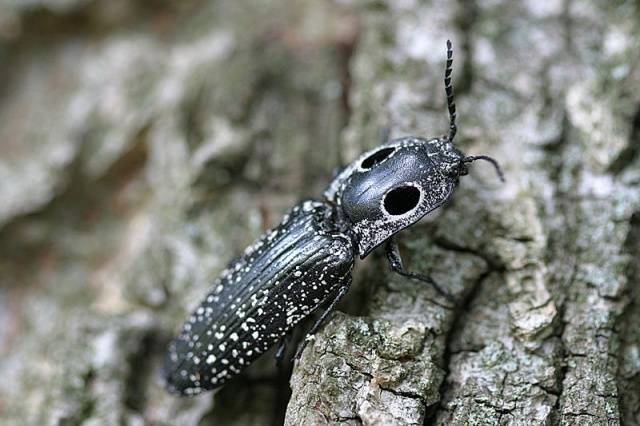 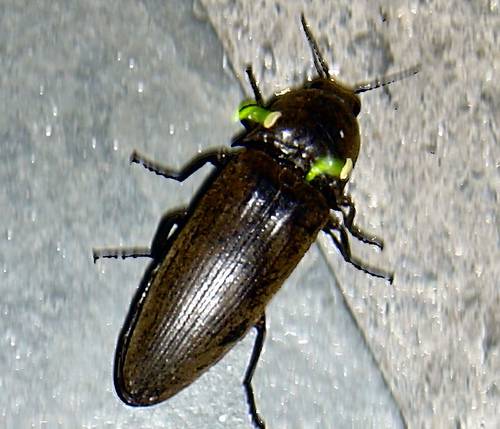 It has been established that the beetles themselves are not dangerous to plants, their larvae do harm. Moreover, a significant part of the clickers, more precisely, their larvae, are serious pests that populate the cultivated land. While the other part are predators hunting in the ground for other living creatures living in the ground.

The larvae of the nutcracker are no less varied in terms of size and color. But the larvae also have common features: a hard chitinous shell and a worm-like shape. Thanks to this appearance, the larvae are very similar to a piece of wire, which is why they got their name.

The real scourge for gardeners is the larvae of three species of clickers. 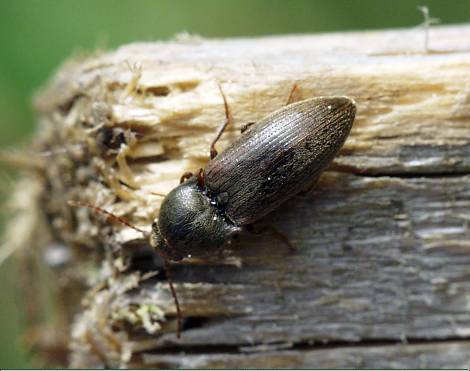 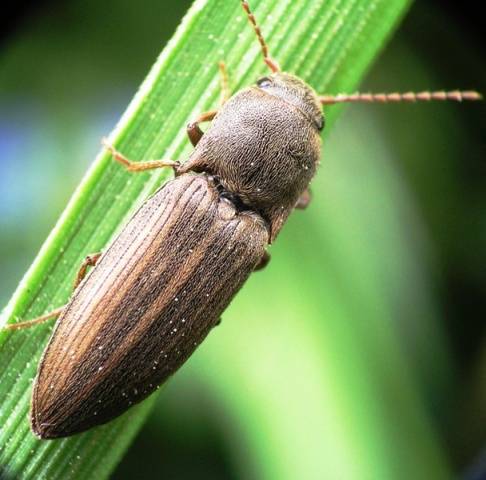 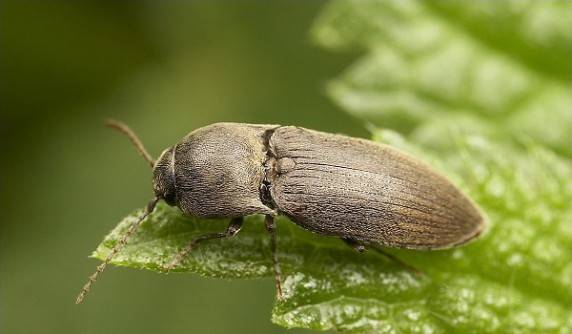 In addition to them, there are several other species of click beetles, whose larvae can seriously damage crops.


To understand what the wireworm of each type of clicker looks like, one would have to study entomology.

The dark nutcracker wireworm reaches 2.5 cm in length and has a dark yellow color of the chitinous cover. With a high degree of probability in the photo, the wireworm of the dark clicker beetle. 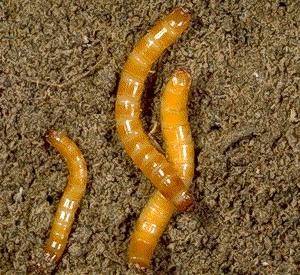 The wireworm of the steppe click beetle 3.5 cm long, brown-red. 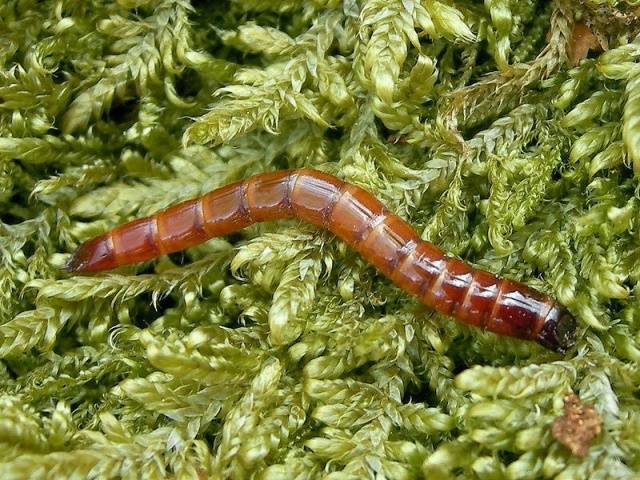 Wireworms of striped nutcracker up to 2 cm long and no more than 2 mm in diameter. 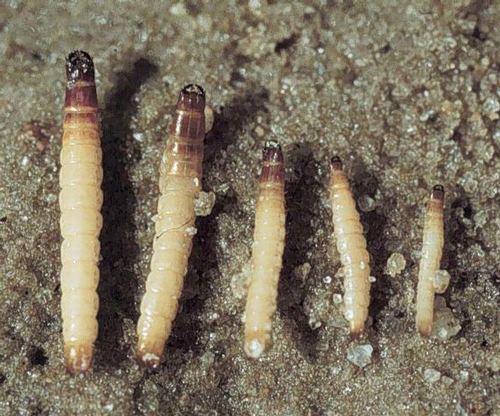 In this case, the larvae of the same click beetle can be of different ages and vary in size, like the wireworms in the photo.

They have a very tough chitin in common, which makes it almost impossible to crush the wireworm.

Colorado, by eating the foliage, reduces the yield and the size of the tubers. But they can be stored potatoes. Root crops perforated with wireworm are no longer suitable for long-term storage. And they are no longer very suitable for eating because of the internal passages. 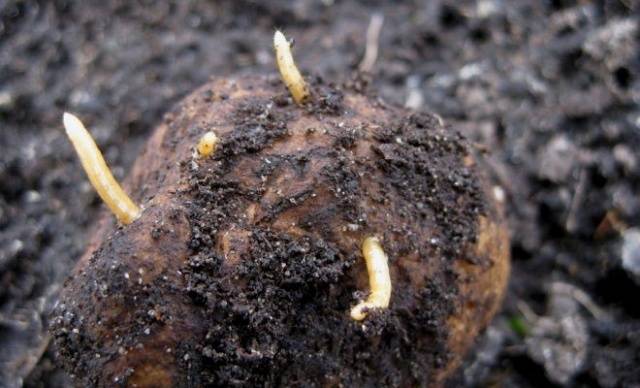 Almost all gardeners are trying to find a reliable remedy for the wireworm, since if the female nutcracker laid eggs in the garden, then the whole garden will be infected and for more than one year. Even if the wireworm has disappeared, this may mean that the larvae have pupated and, after a few years, adult beetles will emerge from the pupae, which will again lay eggs in the garden. One female can lay up to 200 eggs per year.


In agronomy, there are two ways to combat it: agrotechnical and chemical, that is, using insecticides.


Comment! Any pesticide is a weapon of mass destruction of both pests and useful insects, and at the same time birds feeding on insects.

When using the chemical method, the soil is treated with wireworm preparations. The method is expensive and infects the earth with pesticides that kill not only the wireworm, but also beneficial insects living in the soil. First of all, due to the high cost, the chemical method is not suitable for owners of personal plots.

Nevertheless, if things are really bad and the wireworm has flooded the site, you can use the drug "Aktara", which is diluted according to the instructions, and the places of future plantings are shed on them, and tubers are soaked in it. The drug is guaranteed to destroy all living things in the soil, including beneficial larvae and insects.

You can sow the area with seeds of corn or barley treated in Aktara. This must be done before planting the main crop.

In greenhouses where the use of any chemistry is prohibited, pheromone traps are used for sexually mature beetles.


This method of struggle can also be classified as chemical. It is proposed to treat the soil with ammonia fertilizers. It is very problematic to use this method at a summer cottage, since a mandatory requirement when applying this method is to embed ammonia water into the soil to prevent ammonia from evaporating.

It is believed that after the use of ammonia fertilizers, the wireworm tends to leave the treated area.


All these measures are designed for several years. A one-time action for the destruction of a wireworm with agrotechnical methods cannot be achieved.

All these methods are beneficial on large planting areas and are intended either for industrial use or for villages, where the population often has very large areas allocated for potatoes. 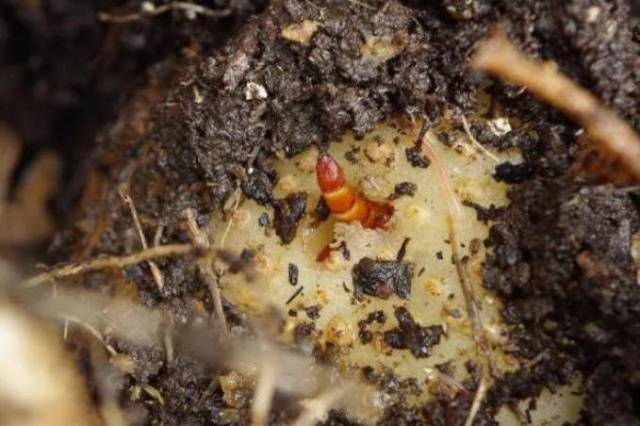 
Wireworms love acidic and moist soil, while garden crops tend to prefer neutral or alkaline soil. Liming the soil is another way how to get rid of a wireworm, without resorting to pesticides or laborious agrotechnical methods, or at least reduce its amount.

Liming in order to control the population of larvae is carried out every 3-4 years. The acidity of the soil can be determined using a litmus test.

With a large number of nutcracker larvae, it is necessary to water the plants no earlier than the topsoil dries out to a depth of 15 - 20 cm. The wireworm does not like dry soil.

Just like with the Colorado potato beetle, there are many folk recipes for how to get a wireworm out. Some of them are very time consuming. The other involves pitfalls.

Comment! Before planting, potato tubers can be soaked for a short time in an infusion of celandine. 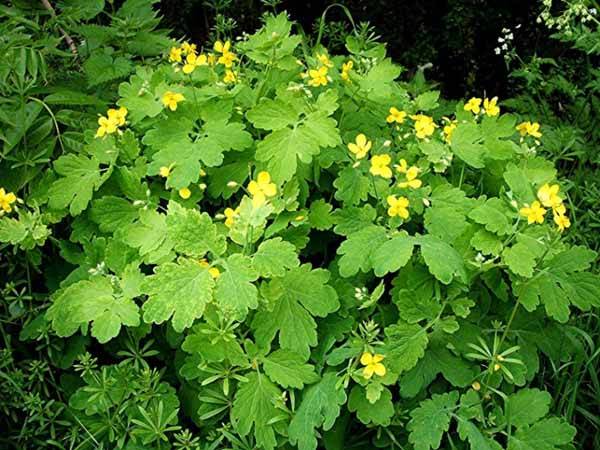 
Almost all methods of protection against a wireworm are based on the manufacture of traps for it in one form or another.

Pre-sowing cereals. About a couple of weeks before sowing potatoes, oats or barley are sown on a future potato field in nests of one and a half dozen grains. After emergence, the plants are dug up and wireworms are selected. The method is very laborious.

Rotten organic traps. This way they get rid of the wireworm in the middle of spring, when the frosts have already ended, but the soil is still quite cold. Pits are dug in the soil and half-over-matured grass, straw or hay are laid in them. Then the bookmark is poured with water and covered with boards. Wireworms crawl into organic matter in search of heat and food. It takes only a couple of days to completely populate the trap with clickbearer larvae. After 2 days, the grass is removed and burned. The procedure is repeated several times.

Professional drugs "Etonem" and "Nemabakt". They are not available for retail sale, as they are designed for large areas. But perhaps this is the most effective way to protect yourself from the larvae of the nutcracker. The preparations are eggs of nematodes, whose main food is wireworm. They are able to cope with larvae within one season. 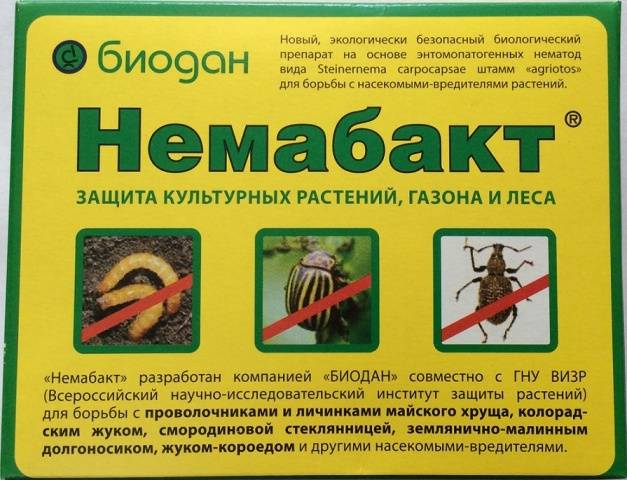 However, "Nemabakt" is already going into retail sale, which is logical, since the market of private small farmers is actually even more extensive than the market of large agricultural producers.

Catching clickers with jam. It is used only in spring, when there are no cultivated plants yet. Diluted syrup from jam, molasses or just sugar is put out on the street at night. In the morning, trapped insects are destroyed, 90% of which are likely to be pests.

How to arrange traps for clickers and wireworms with crops already planted can be seen in the video.

Traps for clickers and their larvae

Other ways to banish the wireworm


Onion peel. When planting potatoes, a large armful of onion skins is placed in the hole. When using this method, a calm day is chosen for planting potatoes so that the husks do not scatter over the entire area.

Dry mustard. The wireworm does not like mustard, so when planting root crops, dry mustard powder can be poured into the hole. Use this method when planting potatoes, turnips or radishes. 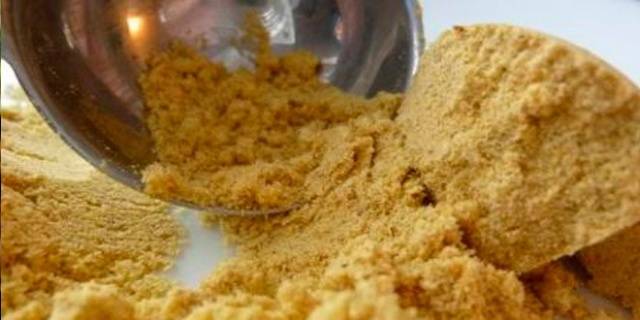 Scare plants. Clicker larvae do not like phacelia, peas and mustard. They are especially unhappy with phacelia, which has the ability to change the acidity of the soil from acidic to neutral. Thus, phacelia is useful not only for expelling the wireworm from the site, but also for the destruction of perennial weeds that love acidic soil. But growing green manure will require additional effort and money. 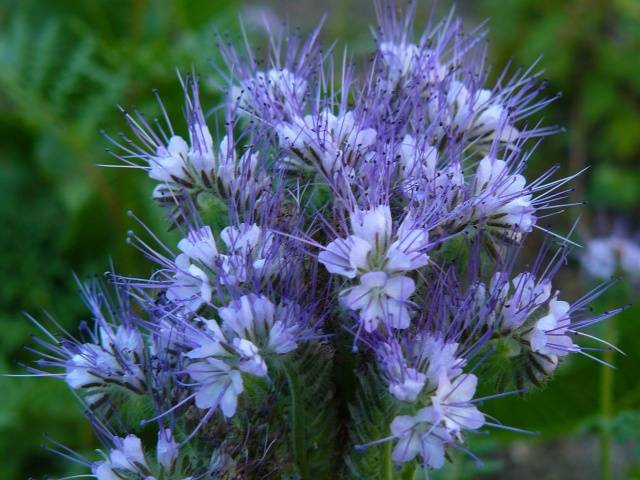 None of these measures will allow you to forever protect yourself from wireworms for the reason that click beetles have the ability to fly, which means that at any time a female click beetle can fly into the site. But it is quite possible to significantly reduce the number of larvae on the site.