Weeds make life difficult for all gardeners and agricultural workers. Therefore, special preparations were developed for the destruction of weeds, which have a common name - herbicides. One of the popular universal remedies is Agrokiller... It is the most effective drug used as a continuous herbicide. 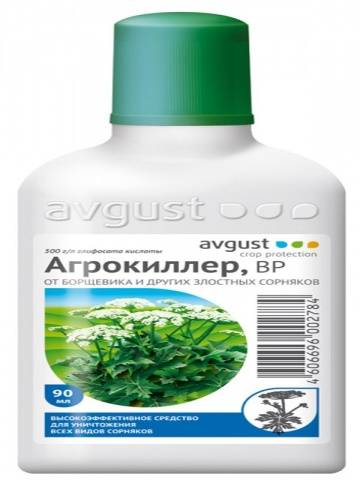 The fields are cultivated with Agrokiller before sowing or before the first shoots appear, that is, immediately after sowing cultivated plants. Agrokiller from weeds affects only young shoots and leaves. It does not penetrate the soil. The article will talk about how this works. weed control and how to use it correctly.

The active ingredient glyphosphate enters the weed through the stem and leaves. Herbicide Agrokiller evenly spreads over the weed, affecting the vegetative mass and root system. 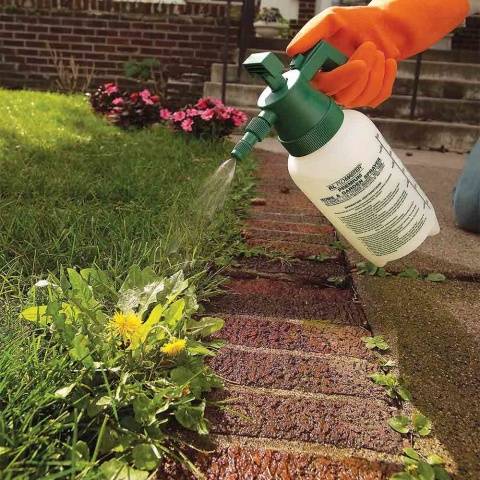 Important! If it gets into the soil, Agrokiller does not have a negative effect on crop seeds, so it can be used after sowing.

Provided that the proportions of the agrokiller, which are stated in the instructions for use, are maintained, the product will not worsen the condition of the soil and the ecological characteristics of the site. The composition is moderately dangerous for human health. It is not one of the drugs that are acutely toxic to honey plants. The optimal tool for the development of virgin lands or preparing the lawn for sowing.

Agrokiller is suitable for the destruction of the following weed species:

Each tool has its own characteristics that distinguish it from other similar drugs. So, many gardeners and farmers prefer to use Agrokiller for a number of reasons: 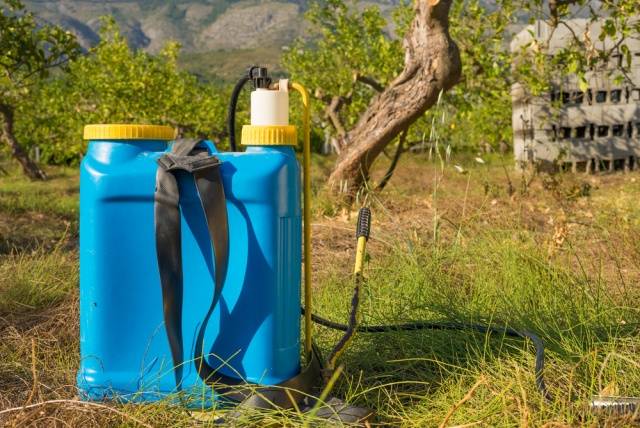 Important! With the help of Agrokiller, even such a vicious perennial weed can be destroyed, such as hogweed Sosnovsky.

The ideal time to use the herbicide is 2 weeks before planting and sowing. This period of time is enough for the death of weeds. After 14 days after processing the field, you can start sowing and planting cultivated plants.

Preparation of the solution

To destroy common weeds, you should dilute 30–40 ml of Agrokiller in 3 liters of water. With such a dosage, it is impossible to destroy malicious weeds, so a more concentrated solution must be made for them - 40–50 ml per 3 liters of water. This amount of liquid can handle 100 m2 fields.

Warning! Do not store diluted liquid. Therefore, dilute as much of the drug as you need to use at a time.

The composition must be sprayed on the green part of the weeds. All work should be carried out in the morning / evening in calm weather. If the drug dries quickly under the rays of the scorching sun, the effect will be less noticeable. The period of absorption of Agrokiller into plants is 5-6 hours.If it rains during this time, some of the solution will be washed off and the action of the product will no longer be as effective as indicated in the product description. 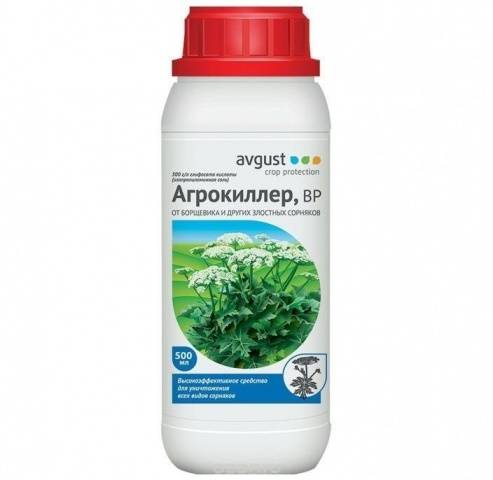 Agrokiller is produced in containers with a capacity of 40, 90 and 500 ml. This displacement is enough for amateur gardeners. For the destruction of weeds in large farms, containers with a larger capacity are needed, so 1 and 5 liters of solution can be purchased on the market. 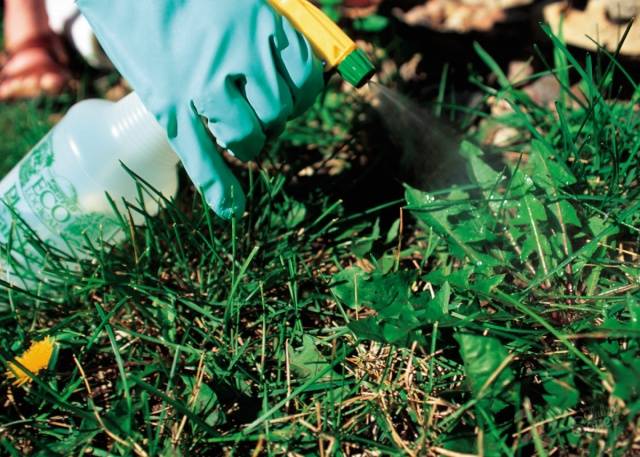 Reviews of people who used Agrokiller indicate the high effectiveness of the drug. It can be used to remove weeds that have a well-developed root system, as a result of which it is impossible or almost impossible to remove them mechanically. If you follow the instructions for preparing the solution, you can get rid of all types of weeds in 1 treatment.

Svetlana, 38 years old, Tomsk
I really liked the drug. I used it to cultivate a piece of land near the house that I bought. The soil was undeveloped and there were so many weeds in the garden that I would not have been able to handle them manually. I was pleased with the result!
Andrey, 48 years old, Tula
A hogweed began to grow in my dacha. Not only is it impossible to remove it mechanically, but it is also poisonous. Trying to rip it out, I burned all my hands. I had to undergo a course of treatment. I read about Agrokiller on the Internet and decided to try it. After processing, the plant disappeared. And then I thought: why did I try to eradicate it with a shovel, if it could be done with the help of herbicides?
Recommended entries
Roundup against weeds: reviews, how to breed
Rooted Weed Remover
Zenkor: instructions for use on potatoes
Weeds weeding: instructions for use
Herbicide Ground - weed control: reviews
How to develop an overgrown plot for a vegetable garden
Folk remedy for weeds with vinegar
Vinegar + Salt + Weed Detergent
What grass to sow so that weeds don't grow
Comments (1)
Give feedback Cancel reply
Lunar
calendar 2021
January February March April May June July August September October November December
Recommended entries
What grass to sow so that weeds don't grow
How to make paths to prevent weeds from growing
How to cover the ground so that weeds do not grow
Killing weeds with vinegar and salt