Sowing siderates in a greenhouse in autumn

Siderata Is a type of green plant that has a positive effect on the soil and nourishes it. When properly planted and cared for, they can nourish the soil better than common organic matter. Moreover, such herbs are safe. This is especially important for a greenhouse, where, over time, its own closed microclimate is created, and without additional feeding, the soil quickly becomes poorer. Greenhouse greenhouse crops in autumn are an excellent solution for enriching the soil with nutrients. 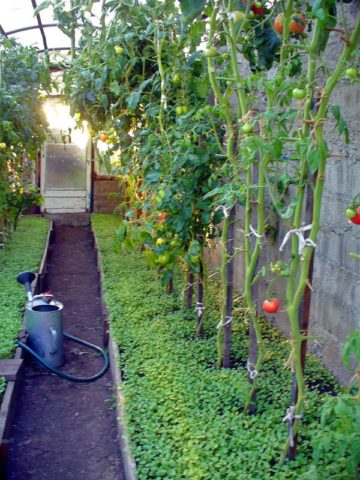 Is it possible to sow siderates in a greenhouse

Benefits of planting greenhouse crops in a greenhouse

There are several main advantages of using greens over organic fertilizers, in particular, manure:

This is a much cheaper and safer way to renew your greenhouse soil and increase yields. Sowing siderates in a greenhouse before winter will help protect seedlings in early spring from the negative effects of the first spring rays of the sun.

When to sow green manures in autumn in a greenhouse

For sowing biological fertilizers in autumn, a not too cold period is chosen. It is advisable to do this in September, after the main harvest. The second stage of sowing is just before winter, in November.

Green fertilizers sown in September will have time to rise before frost, and then they can be left until spring and not mowed. And the plantings, which are sown in November, will emerge in the spring. In this case, they must be mowed before flowering and thus preserved in the soil. This is an excellent method for those who grow early varieties of tomatoes and cucumbers in the country. It is useful to sow siderata in a greenhouse in autumn twice: in September and in November. This will preserve the yield and disinfect the soil. But these must be different plants. 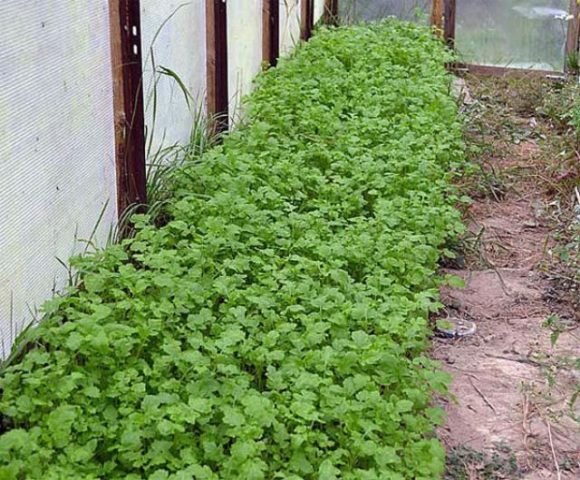 More than 400 plant species can act as siderata. What kind of fertilizer to plant in the greenhouse in autumn depends on the timing of planting and on the crop that will then be grown in the greenhouse, as well as the desired effect. To enrich the soil with nitrogen, it is necessary to plant legumes:

If they decide to plant before winter, then it is advisable to take cold-resistant crops, for example, vetch, rye, oats or rapeseed.

Mustard will perfectly protect the soil in the greenhouse from pests and weeds. Oats will enrich the soil with potassium and phosphorus. Planting siderata in a greenhouse in autumn is an inexpensive and safe way to protect crops from pests and diseases, as well as to nourish the soil.

Phacelia is considered a universal green manure for all occasions.This green fertilizer option is not afraid of either cold or drought. At the same time, the plant has a decorative appearance, scares away the fungus, fights against nematodes and aphids.

For tomatoes, peppers and eggplants

Each crop requires a specific soil nutritional value, and is also susceptible to various diseases and pests. Therefore, when choosing a green fertilizer, it is recommended to focus on the crop that will then be grown in this greenhouse. This will help you find the best option. Crops such as peppers, eggplant and tomatoes, after a bountiful harvest, leave nothing useful in the soil. The soil becomes literally empty, and therefore planting green fertilizer will be as justified as possible if these crops are again planted in the greenhouse next year.

The best option for planting in autumn will be cereal siderates: oats, rye, barley. They will give potassium to the soil. A lack of potassium will result in the tomatoes being small, flowering late, and yields significantly reduced.

And also before winter for tomatoes and peppers, it is good to plant phacelia. It will normalize the acidity of the soil. You can also use a mixture, alternating oats with vetch and rapeseed.

Oats as a siderat in the fall in a greenhouse are good for planting for cucumbers. This will help to enrich the soil with nitrogen, as well as completely heal the soil. Since cucumbers strongly "suck" useful elements from the soil, it is useful to plant legumes in the fall: lupines, beans, as well as clover and vetch. After these crops, the yield of cucumber will increase significantly.

It will not hurt to sow mustard for pest control and soil disinfection. Among the greenhouse crops sown in autumn, greenhouse mustard is of particular importance due to the sulfur in its root system. This will help avoid wireworm infestation. 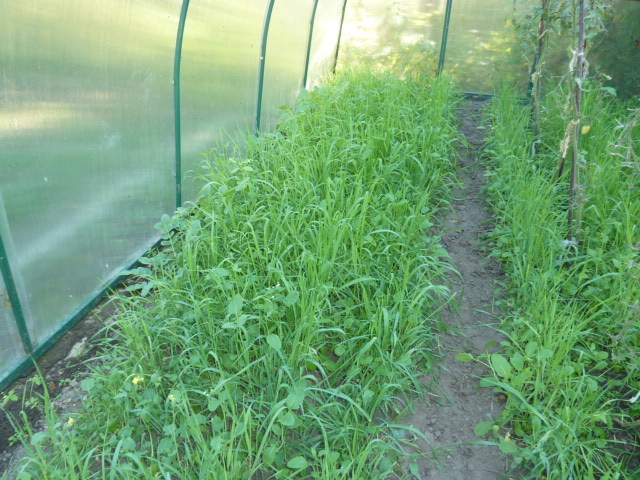 If you plan to plant garlic in the greenhouse, then legumes are not recommended as greenhouse crops. The best option for fertilization is phacelia and mustard.

For carrots, radish, mustard and rapeseed are suitable as fertilizers. In principle, this culture is not so capricious and will grow well after any green manure.

Cabbage and radishes will yield excellent harvests after cereals and most legumes.

How to sow green manure correctly

To obtain an optimal result, it is important to follow the rules of agricultural technology that are provided for green manure. For landing, the following algorithm of actions is used:

These are the basic rules for sowing green manure. Usually, in the care of these plants, they are not capricious and easily adapt to a variety of agricultural conditions.

Green fertilizers can be planted three times a year: spring, autumn, summer. Each of these landings has its own benefits. Various types of green fertilizers are also most commonly used. In autumn, mainly rapeseed, rye, vetch, white mustard and oats are planted.

For spring, the most suitable are cold-resistant plants that can easily tolerate the first spring frosts and have time to ascend to the greenhouse before sowing seedlings.Until this moment, it is necessary to have time to mow the green fertilizer at least once. These are rye, oats, mustard and phacelia.

A few tips for novice gardeners

The most important thing that the gardener should take into account when sowing biological fertilizer: these plants should not give seeds and sow in the garden. Otherwise, a banal weed will form in the greenhouse, which by all means will interfere with the growth of cultivated plants and instead of benefit, there will be a huge amount of trouble for the subsequent removal of a useful plant from the greenhouse. Therefore, it is important to mow the green manure on time. This is usually done at a time when the grass reaches 30–40 cm and does not begin to bloom. This is the best option, since green plants will rot and saturate the soil with additional nutrients.

You cannot use the same green manure throughout the season and for any plant. What is a good precursor for tomatoes will not work in a greenhouse where cabbage or peas are grown.

With timely planting in spring, siderates will be able to protect fragile seedlings from the first bright sunlight.

Each type of green manure has its own planting characteristics, which should be taken into account:

If we take into account all these nuances and prevent biological assistants from multiplying, then the soil in the greenhouse will not be able to turn into mineralized soil and the yield of cultivated plants will always be at a high level. 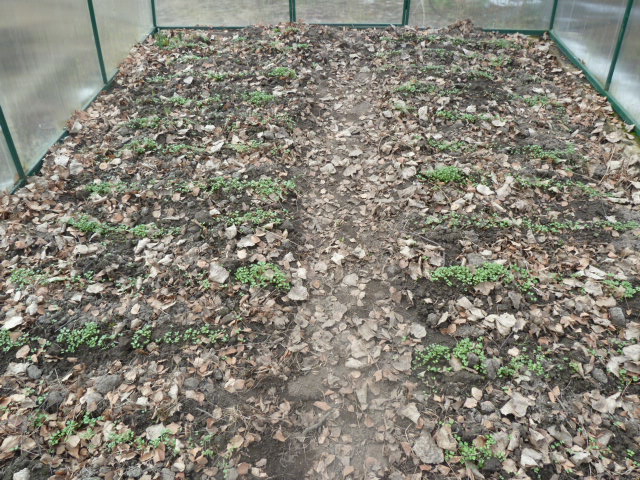 Greenhouse greenhouses can be planted twice in autumn, but even one full-fledged planting with the correct agricultural technology will allow the gardener to get an unprecedented harvest of cultivated plants the next year. It is important to choose the right specific green fertilizer, as well as to mow it in time, so that the useful product does not turn into a weed. Recently, this method of soil fertilization has become more and more popular, especially since it does not require significant economic costs.