It would seem that nothing can surprise experienced gardeners and summer residents. However, breeders do not sleep and try to amaze not only with tasty, but also original varieties of vegetables. Time shows what lovers of homemade tomatoes prefer.

Description of the variety

Zhigalo became such an extraordinary tomato. Irregularly shaped fruits look like exotic overseas vegetables and have a muted red color. 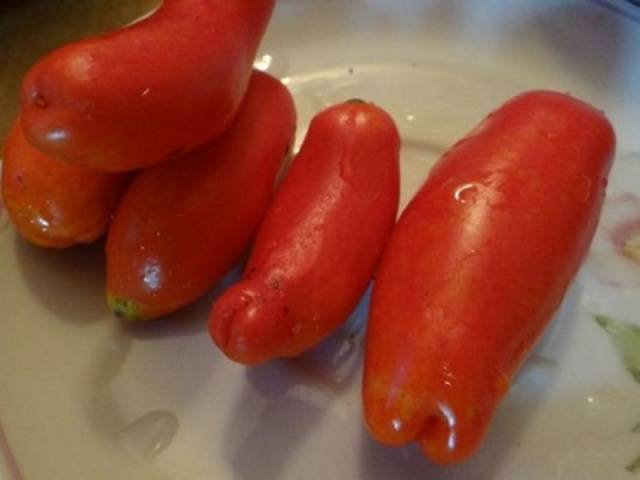 The taste of tomatoes can be described as sweet, but not sugar. In shape, the fruits resemble a sausage and weigh modestly - 100-125 g. Therefore, we can say that high yield is provided not by weight, but by the number of ripe tomatoes. On one brush, 5-7 pieces are tied (as in the photo). 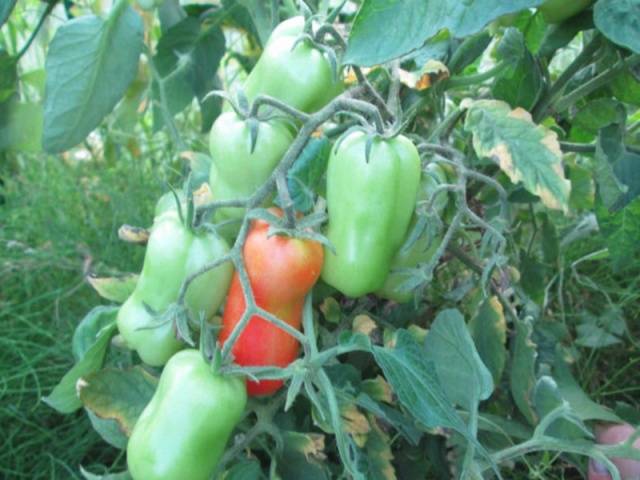 The ripe fruit does not differ in dense pulp, has few seeds, and housewives successfully use it for stuffing. Gigalo belongs to mid-ripening varieties of tomatoes, and therefore the first ripe fruits do not appear earlier than 98-104 days. 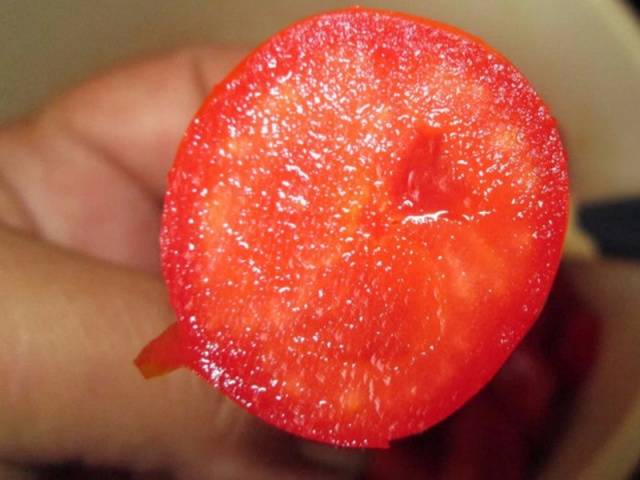 Standard bushes of tomatoes The Zhigalo varieties have a rather compact appearance and grow to a height of 40-46 cm. The Zhigalo belongs to the determinant varieties of tomatoes. That is, the bush practically does not branch and independently stops growing in height, without the help of a gardener.

Important! A distinctive feature of standard tomatoes is an underdeveloped root system. Therefore, in a limited area, tomatoes can be planted more densely and at the same time harvested more.

Among the disadvantages of the Zhigalo variety, it is worth noting the susceptibility to nightshade diseases. Some gardeners note the increased density of the peel, which is not very pleasant when eating fresh fruits.

There are no special secrets for growing the Gigalo variety. When growing tomatoes, seedling and seedling methods are used.

In a greenhouse or open ground, seedlings can be planted as soon as warm weather sets in, excluding unexpected frosts. 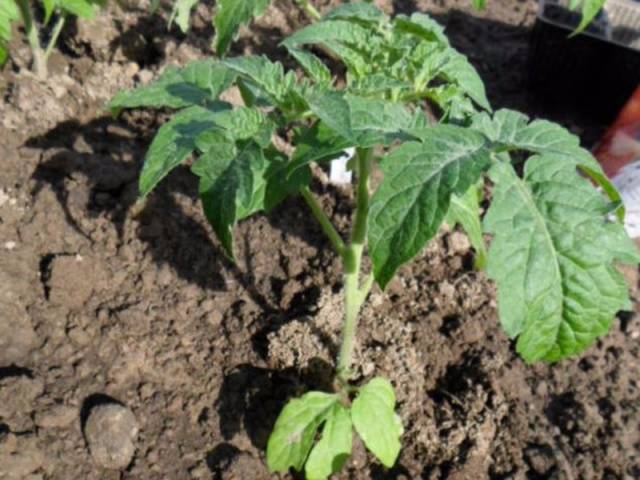 With this technology of growing tomatoes, seed germination is first carried out. Thus, you can achieve earlier germination of seedlings of tomatoes of the Zhigalo variety. To germinate seeds, they are placed in a linen bag and dipped in warm water for about 12 hours.To keep the seeds cool, the water is periodically changed. Germinated seeds, two pieces at a time, are buried in holes dug in a specially prepared area.

It is possible to plant seedlings according to two schemes: linear and checkerboard. 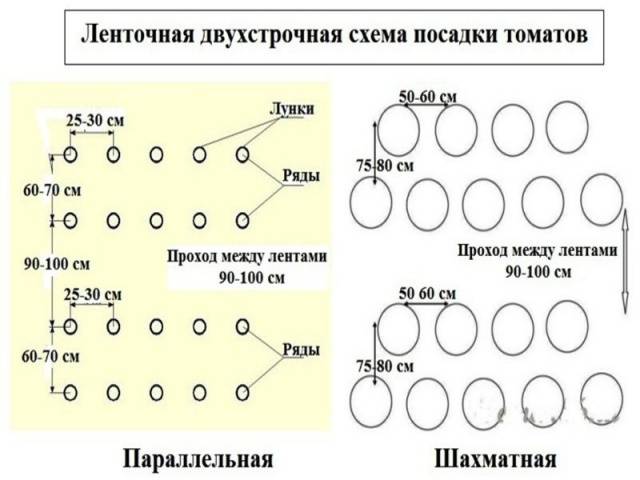 As soon as the seeds germinate and two leaves appear on the seedlings, the seedlings are thinned out - a stronger plant is left in the hole, and the weak sprout is not pulled out, but cut off so as not to damage the neighbor.

Important! When planting tomatoes of the Zhigalo variety according to any scheme, the distance between the beds remains within 90-100 cm.

Since the Zhigalo variety is undersized, there is an opinion that it is not required to tie it up. It is believed that a tomato has a strong stem and a developed root system already in the process of sprout formation. However, when a large number of fruits ripen, the Zhigalo bush can break / fall down with strong gusts of winds. Therefore, it is advisable to provide each bush with a support even during the preparation of the beds and holes.

Advice! In regions with a cool climate, the garter must be carried out in order to prevent plant diseases so that the fruits do not fall to the ground.

In warm areas, you can do without supports. Zhigalo bushes will be laid on the ground, protecting the soil from drying out. It is advisable only to pre-mulch the soil. 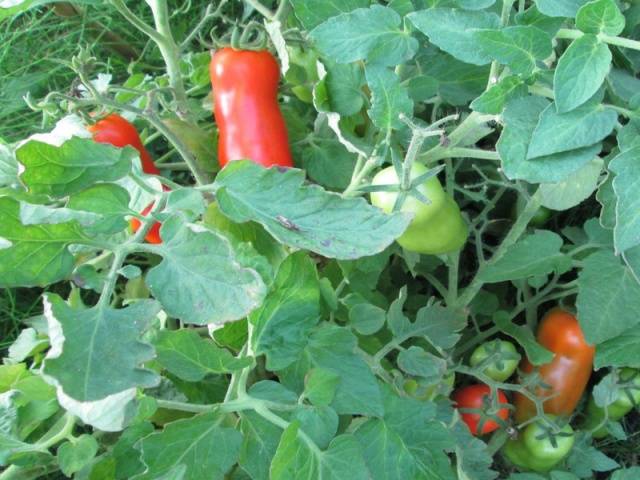 The Zhigalo tomato variety does not need close attention and care. Since the root system of the plant is located close to the surface of the soil, it is necessary to beware of excessive moisture in the soil. It is worth navigating by the soil - when it dries, water it.

Warning! It is recommended to avoid getting water on the stems and stem of the plant.

After watering, the soil must be loosened to ensure good air exchange.

3-4 days after thinning the seedlings, you can carry out the first feeding of Zhigalo tomatoes. A suitable fertilization option is ammonium nitrate solution (15 g per 10 liters of water). It is advisable to pour a liter of solution under each bush. After fertilizing, it is recommended to mulch the soil.

As soon as the fruits begin to set on the bushes, the second feeding of the Zhigalo tomatoes is carried out. A mineral mixture is used as a fertilizer (there are 20 g of superphosphate and 10 g of potassium chloride per square meter). Fertilizers are buried in moist soil. To do this, shallow grooves (4-6 cm) are made along the rows of bushes at a distance of 17-20 cm from the plants. 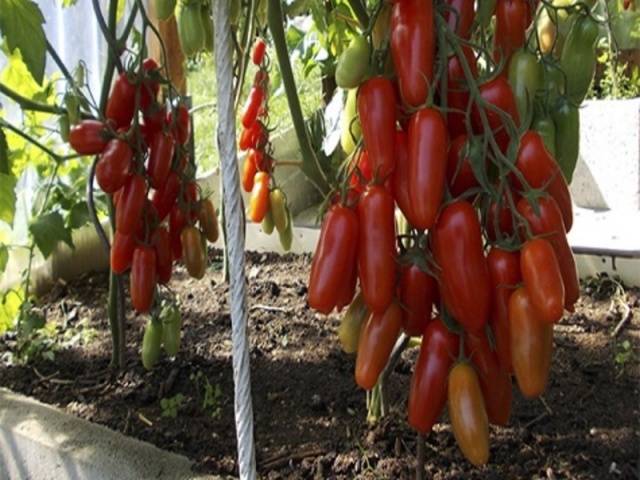 When fertilizing the soil, it is recommended to carefully apply nitrogen fertilizers. Excessive use of them leads to increased growth of the bush and an abundant build-up of green mass.

If there are no ready-made mineral fertilizers, then it is quite possible to use organic fertilizers. To prepare the mullein solution, use a bucket of manure and 10 buckets of water. Tomatoes are fertilized with an infused (10-12 days) solution. Moreover, a liter of infusion is still pre-diluted with ten liters of water. Feeding rule: a liter of diluted infusion is poured under each bush.

The standard grade Zhigalo does not create problems with pinching. Therefore, there are no difficulties with caring for the bush and its formation.

Late blight is a fungal disease that affects not only the plant, but also the fruits. It is known that low temperatures and high humidity are favorable conditions for the spread of the disease. Therefore, when weather conditions worsen, it is recommended to spray tomatoes with Bordeaux liquid, fungicides (Ridomil Gold, Quadris).

As regular preventive measures, it is recommended to mulch the soil, timely remove old and yellowed leaves.

Vladimir Redikin, Belgorod
Interested in standard varieties for a long time. He started from the balcony in the apartment (he planted the Snegirek variety). Antoshka is now growing at the dacha. Gigalo tomatoes were attracted by their unusual shape. As always, the yield of the standard varieties did not disappoint. Burner is very good for conservation (lecho was especially successful). I'll leave it for the next years.
Sergey Smirnov, Voronezh
On the Internet I saw an advertisement for standard tomato varieties. He became interested and planted on the Zhigalo site, as they were assured of a high yield. I don't have much land, so I planted the tomatoes quite tightly. But the variety Zhigalo did not disappoint - an excellent tomato harvest and no hassle with bushes.
Svetlana Kovalenko, Novorossiysk
So I have grown sausage tomatoes. The bushes were about 50 cm high. I was not at all involved in pinching and forming bushes of Zhigalo tomatoes. Therefore, there were several trunks in the bushes. The amount of fruit amazed both me and the neighbors. I was especially surprised by the size of the tomatoes - the largest was 15 cm long and 4 cm in diameter. The taste is not particularly memorable, but the adjika came out gorgeous. I will leave the variety for next year.
Recommended entries
Tomato seedlings are thin and long: what to do
Spots on tomato seedlings: what to do
How to spray tomatoes from late blight
Tomato Raspberry Giant: reviews, yield
Tomato Blueberry: characteristics and description of the variety
Tomato Aswon F1
Tomato Pink Miracle F1: reviews, photos, yield
Tomato Chibis: reviews, photos
Tomato Negritenok: characteristics and description of the variety
Comments (1)
Give feedback Cancel reply
Lunar
calendar 2021
January February March April May June July August September October November December
Recommended entries
Low-growing late tomatoes
Tomato Lazy
The best tomato varieties for 2021
The most productive varieties of tomatoes for the greenhouse