Tufted cucumber varieties have recently appeared on the market, but quickly gained popularity among gardeners seeking large seasonal yields. Even 15-20 years ago, early ripening medium-fruited hybrids were grown in greenhouses, and ordinary varietal cucumbers were grown on open ground.

Bunch hybrids were obtained by breeders by crossing several varieties with a female ovary. Thus, these varieties began to produce 4 to 10 fruits per node of the ovary, which significantly increased the yield. 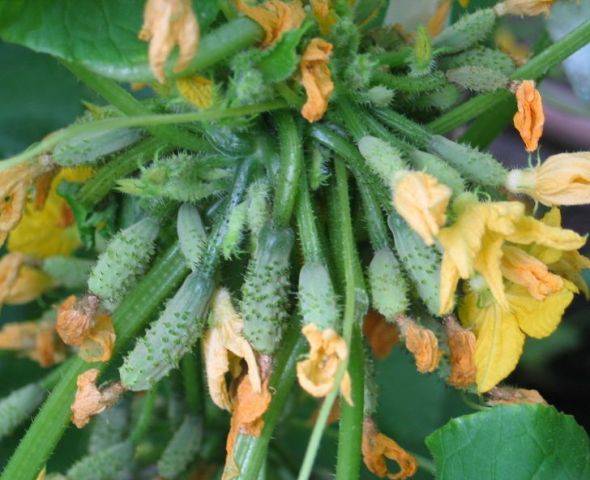 Growing and caring for bunch cucumbers

In order for the bunch cucumbers to have a long growing season and produce a significant amount of fruit, they require special care. A large number of ovaries makes the plant weak, so hybrids of this type need regular feeding and following some rules during cultivation:

Advice! Please note that harvesting of bunched cucumbers should be done daily.

Overgrown fruits remaining on the bush prevent the emergence of new ovaries.

Supports are an important factor for growing bunch hybrids in the open field. The best fruits and maximum yield are obtained from bushes tied to a trellis fixed on supports, 2 meters high and higher. At the same time, a mesh must be attached between the posts, with a mesh size of at least 15 cm. New cucumber lashes are fixed on it.

Bunch cucumbers require regular maintenance and feeding. Despite the fact that the vegetation in bunches is inherent in the plant at the genetic level, it can change from improper watering or poor lighting. 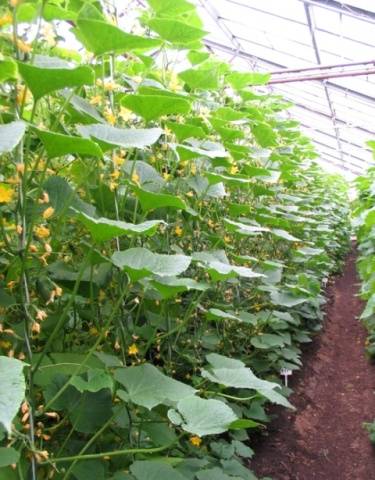 At the same time, the plant cannot be overfed with fertilizers. In the case of abundant or improper feeding, tufts can form only on the lower ovaries of the stem. The optimal conditions for growing cucumbers are maintaining the required temperature (without sudden fluctuations) and relatively high air humidity. That is why it is recommended to plant bunch cucumbers in equipped greenhouses or outdoors in summer, when the air temperature has settled.

How to choose the best variety for planting

Hybrids of bunch cucumbers are divided into several species, the main of which are insect pollinated or parthenocarpic.The former, as a rule, are grown in open ground or in greenhouses specially equipped with an opening roof. The latter are adapted for film greenhouses and greenhouses. 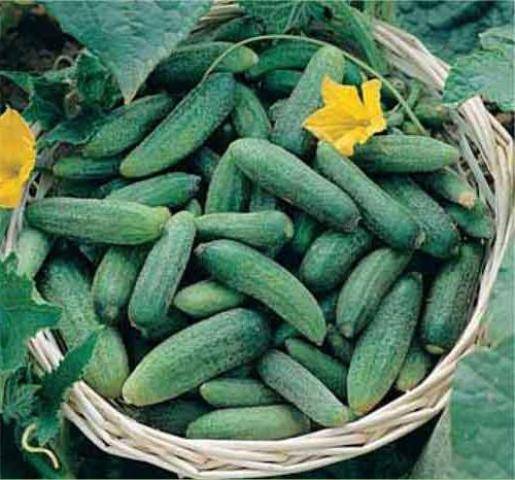 These plants do not require regular pinching, are easy to care for and have a fairly long growing season. The best varieties - "Cheetah F1", "Ant F1", "Grasshopper F1", "Trump card".

The best varieties of cucumbers with low branching

An excellent option for a large seasonal harvest. The growing season lasts from 1 to 1.5 months. Weak lateral branches are short, do not require pinching. The best varieties - Balalaika, F1 Bouquet, F1 Alphabet.

It is clear that the harvesting of bunch cucumbers is a regular and laborious process. But what about those who show up on their backyards only on weekends? Is it possible to grow a good harvest by caring for cucumbers 2-3 days a week? 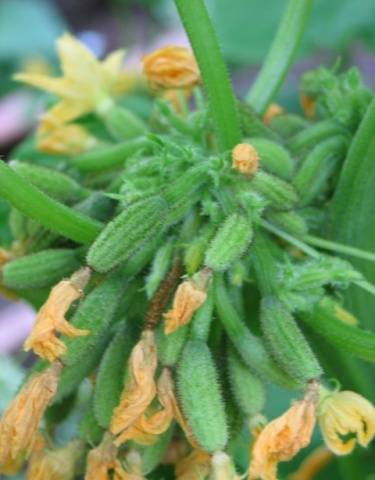 Especially for summer residents, domestic breeding has developed several varieties of bunch cucumbers with deliberately slowed down fruit growth. Due to this, the cucumbers on the bush practically do not have the opportunity to outgrow, and do not take away energy from the greens. The crop can be removed once a week.

The most popular among them are the insect pollinated varieties of cucumbers "Captain F1" (pictured above), "Acorn F1". Self-pollinating - "Be healthy", "Balcony F1", "Karapuz F1".

Attention! When planting the Captain and Acorn hybrids, remember that these plants have an exclusively female flowering type, so any cucumbers from pollinator varieties are planted with them.

Tufted cucumbers with slow fruit growth have another characteristic feature - their miniature and non-pollinated fruits are excellent for canning. And such a hybrid as "Balkonny" is unpretentious to care and gives large yields, adapting to any growing conditions.

The most popular varieties of bunch cucumbers

Correctly planted and well-grown cucumbers with a bunched ovary, on average, are capable of producing up to 20 kg of a crop per bush. When choosing a variety, be sure to read the instructions and study the basic conditions of care.

The following are popular and in demand today: 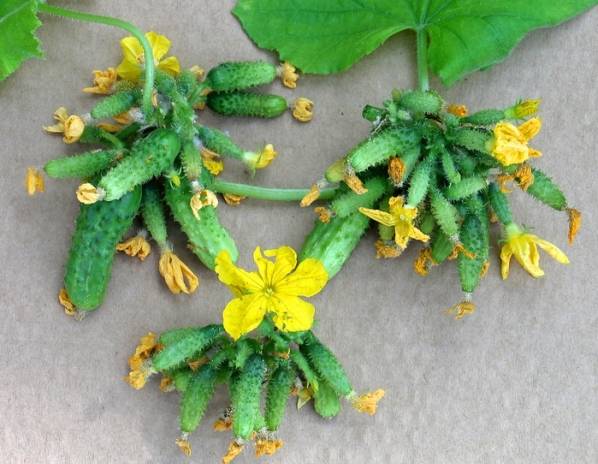 Refers to early ripening varieties intended for growth in greenhouses, greenhouses and open land. In one bunch, from 4 to 6 cucumbers are formed. The growing season is 1.5 months, and the resulting fruits reach 8 to 10 cm in length. The variety is versatile and the crop can be used for both salads and canning. 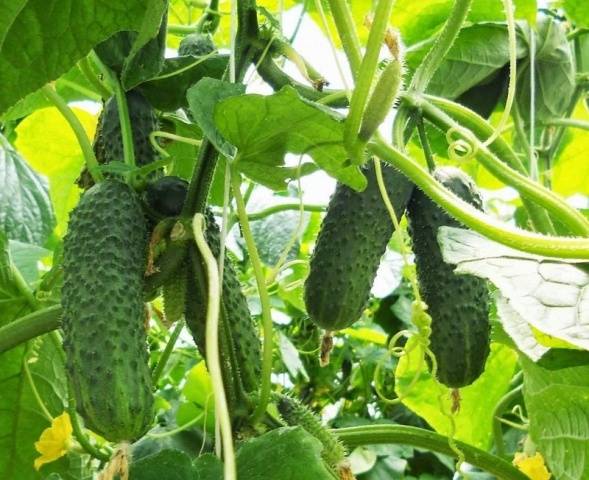 Self-pollinating early ripening variety of cucumbers that feels great both in greenhouse conditions and in the open field. In a bunch, up to 4 medium fruits are formed, the average weight is 100 g. Distinctive features of this type are increased genetic resistance to fungal diseases and low temperatures. 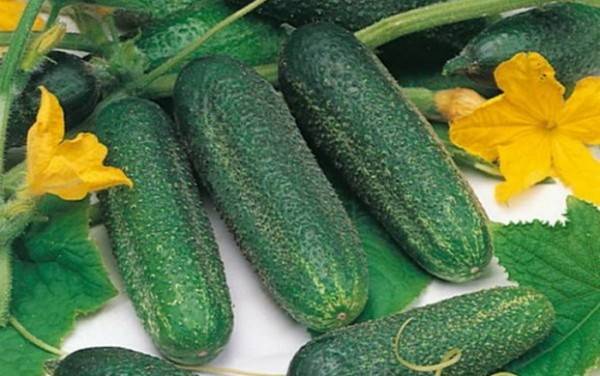 The cucumber is famous for its long growing season and high yields. It is grown both in greenhouses and outdoors. The average number of ovaries in a bunch is 8 pcs. The length of one cucumber during the ripening period can reach 12-15 cm. 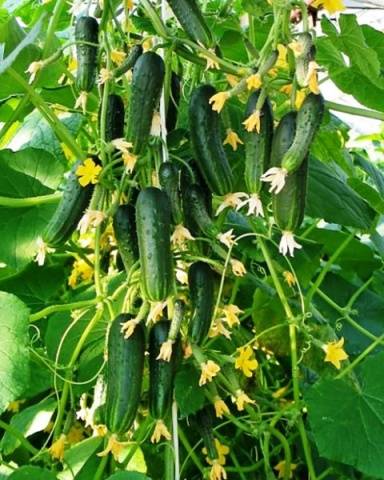 This variety is considered the most productive among the bunch hybrids. The green wave is resistant to temperature extremes and viral infections typical of greenhouse varieties. As you can see in the photo, the average number of ovaries in the nodes is 8-10. 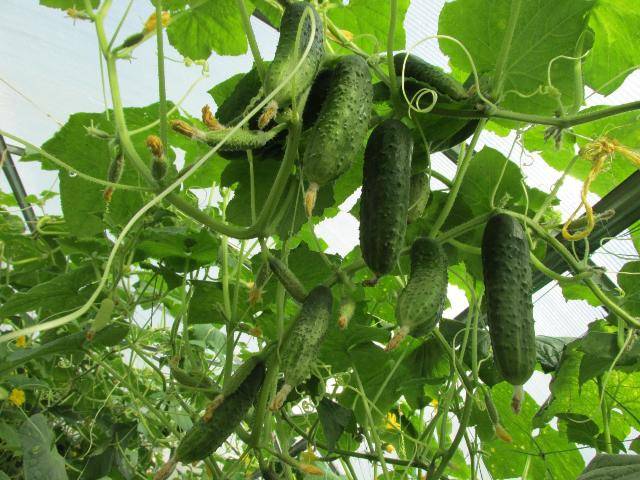 A hybrid, the seeds of which are brought to us from Holland.When fully ripe, cucumbers reach a length of up to 15 cm, and a weight of up to 100 grams. The variety is considered the tastiest among the bunch hybrids and has an enviable stability in obtaining large yields. 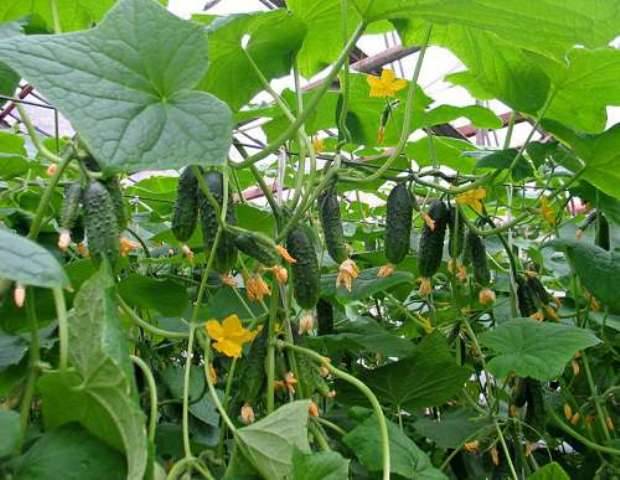 Self-pollinated early maturing hybrid intended for cultivation in greenhouses and open field. The first fruits ripen already on the 40th day after the transfer of seedlings to the soil. Cucumber does not require regular watering and maintenance, is resistant to powdery mildew, fungal diseases, with stable long-term fruiting. 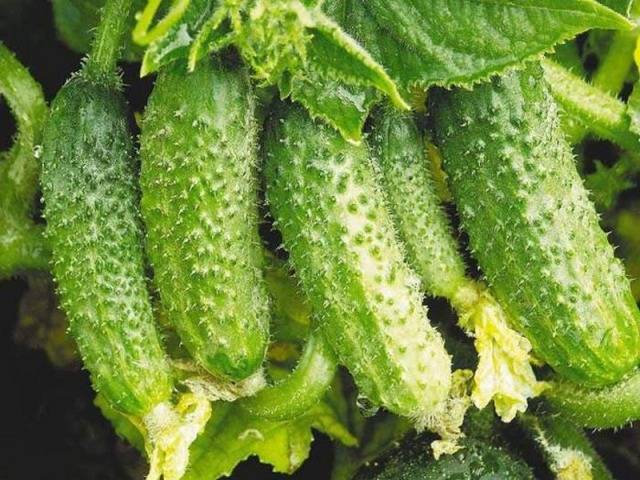 Another new variety of bunch cucumbers grown by Dutch breeders. As you can see in the photo, they are extraordinarily beautiful. Up to 8 fruits, 10-12 cm in size, ripen in one bunch. The hybrid is versatile and ideal for canning and pickling. In addition, this variety does not lose its appearance during long-term transportation.

The cultivation of bunch cucumbers is associated with some difficulties that are not inherent in conventional cucumber varieties. But, despite this, they are gaining more and more popularity among gardeners who want to get stable and rich harvests.

When buying seeds for seedlings, be sure to consult with the seller about the characteristics of growing a certain type and variety, its resistance to changing weather conditions, and susceptibility to diseases. Strictly follow all growing instructions.

Antonina Telegin, Novorossiysk
I have been growing cucumbers for over 15 years. I plant seedlings in the beds, without a greenhouse and a greenhouse. For the second season in a row I have been using Avalanche seeds. Cucumbers live up to their name - the harvest has to be removed almost every day, and the smallest cucumbers are surprisingly tasty when salted.
Nikolay Samoilov, Taganrog
I have had my own greenhouse for a long time. I decided to start growing bunch of cucumbers in order to collect as much harvest as possible during the season. The first experience turned out to be successful - the Bogatyrskaya strength variety did not disappoint! I recommend these cucumbers to everyone!
Recommended entries
How to fertilize cucumbers with ash
Cucumber varieties for growing on a windowsill in winter
Autumn varieties of cucumbers for the greenhouse
Self-pollinated cucumber varieties for early harvest
When to plant cucumbers for seedlings in 2021
The cucumber seedlings are overgrown
Seedlings of cucumbers in peat tablets
Planting cucumbers for seedlings in tablets and peat pots
Cucumber Adam F1: description, reviews
Comments (1)
Give feedback Cancel reply
Recommended entries
The best yielding self-pollinated cucumbers for open ground
Feeding tomatoes and cucumbers with yeast
Cucumber Herman f1
Cucumber Artist F1