Cucumbers The real colonel is a hybrid, the fruits of which have a sugar flavor with a complete lack of bitterness. In marinades and pickles, the culture retains excellent qualities. The plant is convenient to grow in greenhouses and greenhouses as it does not require pollination. Judging by the reviews of summer residents, the variety is one of the best today 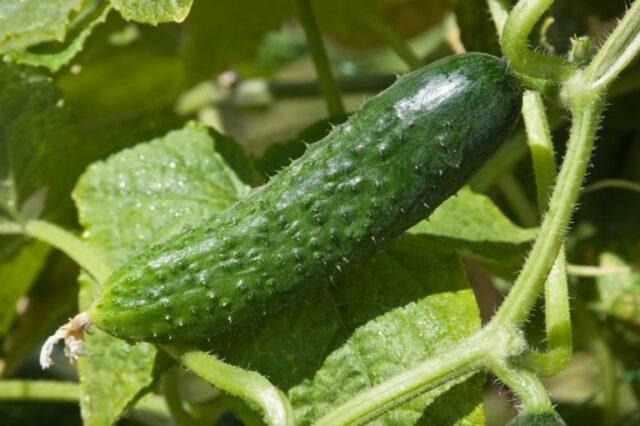 A real colonel is a parthenocarpic cultivar with a female flowering type. Was bred by the largest breeding company "Manul", which has been producing seed for 20 years. The species was entered into the State Register of Plants of Russia in 2004. This colonel is suitable for growing in almost all regions of the country, as well as in the near abroad. It is successfully cultivated in the Caucasian, Northern, Middle Volga and Central regions.

The variety Zelentsov is indeterminate, unlimited in growth. The bushes are powerful, tall, have medium branching, the formation of ovaries occurs in bunches. Leaves of medium size, bright green color, 3-4 fruits are formed on the axils. Each cucumber weighs from 110 to 130 g, grows up to 13 cm long, maximum 15 cm (does not outgrow), the size is 4-5 cm in diameter. Fruits are cylindrical, slightly curved, with dense pubescence and an attractive presentation. Their taste is juicy, crunchy, slightly sweetish, there is no bitter aftertaste. The color is dark green with pale, barely noticeable light stripes. A cucumber with a thin skin, the surface is covered with large tubercles. The pulp is fragrant, dense, crunchy, medium-sized seeds. Cucumbers A real colonel of universal use, but, according to some gardeners, fresh is tastier than salted. 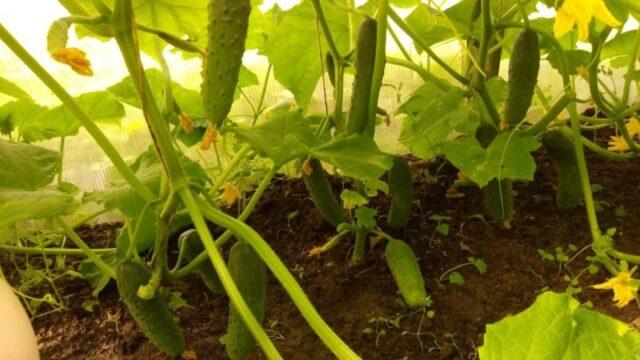 In greenhouse conditions, the cucumber of the variety grows juicier and larger

The hybrid has established itself as a variety with high fruit yields with excellent commercial characteristics. A real colonel quickly adapts to adverse weather conditions, grows on almost any land. The variety is recommended for breeding in sheltered structures and in open areas.

The variety is distinguished by extended fruiting; in some regions, summer residents collect fresh cucumbers before early October. The yield is stable and high. From a seedling, with proper crop care, up to 3 kg of fruits are obtained in one collection, from a square meter about 12-13 kg.

Comment! It is better to pick cucumbers in the morning, while it is advisable not to pluck them, but to cut them off.

The real colonel is a medium-ripening variety. After the shoots appear, 40-45 days should pass until the final ripeness of the cucumbers. The bushes bloom after about 1.5 months from the date of planting.

Cucumber variety The real colonel is not very susceptible to diseases common for culture.But taking preventive measures, as well as observing the law of crop rotation, will help make the plant's immunity even stronger and exclude infection with root rot, tobacco mosaic or powdery mildew.

Among insects, slugs, whitefly and spider mites are dangerous for the variety. Pest control should be started as soon as it is discovered.

The variety has many advantages over many other varieties of this vegetable crop. 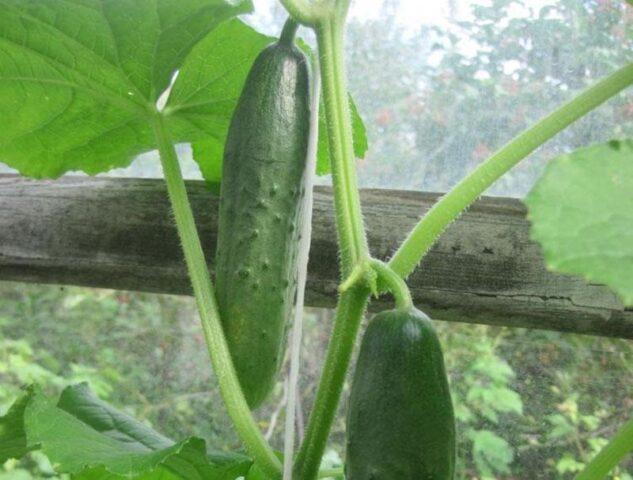 The real colonel took the strongest sides from the "parents"

Variety The Real Colonel can be grown both by direct sowing in the ground and by seedling. Each option has its own characteristics. The versatility of the hybrid is amazing. The cucumber can even be planted on the balcony, and this will not at all affect the taste and fruiting of the plant.

With a seedless method of growing cucumber seeds, the Real Colonel is placed in prepared soil, heated to a temperature of +16 ° C or more. Usually a favorable time for planting a variety is early or mid-May. Light, non-acidic soil and a well-lit area are best suited for the plant. Before the procedure, it should be dug up, fertilized with manure, formed beds and moistened. The seeds of the Real Colonel are sown in small holes 2 cm deep with an interval of 50 cm. After sowing, the bed is covered with foil. When shoots appear on the surface of the earth and the threat of a sharp night cold snap has passed, the shelter is removed from the garden bed.

Advice! To make the soil light, it is useful to add sand or peat to it, and add lime or dolomite flour to reduce acidity.

Cucumber A real colonel is sown for seedlings a month and a half before the intended planting in the ground. To do this, use a nutritious soil mixture and high-quality planting material purchased in a specialized store. It is advisable to take individual containers in order to avoid subsequent picking of seedlings, which always brings stress to the young plant. Peat pots are best suited for this purpose. The seeds of the Real Colonel are sown in two pieces to a depth of 1-2 cm, after which the plantings are watered with settled water at room temperature and covered with glass or film. Leave containers in a room with a temperature of +25 ° C until shoots appear. When the sprouts hatch, the pots are rearranged on a lighted windowsill, the shelter is removed, and the air temperature is lowered to +22 0C. Throughout the growth of cucumber seedlings, the Real Colonel takes care of her as usual: if necessary, moisten and loosen the soil. When four true leaves are formed on the sprouts, they can be transplanted to a permanent place.

Advice! To improve seed germination, before planting, they should be soaked for eight hours in Zircon or Epin growth stimulants. 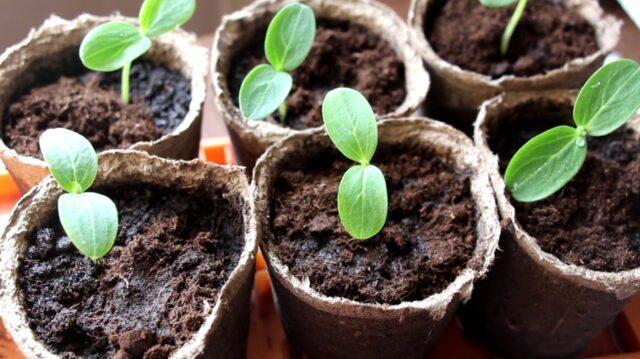 The cucumber has a vulnerable root system, it is better not to injure it during transplantation.

A real colonel is an unpretentious vegetable cultivar. Caring for him includes the following manipulations: 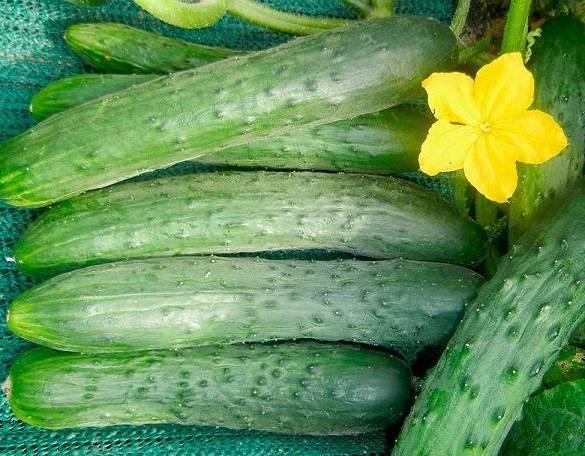 If the rules for caring for the plant are not followed, there is a threat of the formation of voids in the fruits

Cucumbers A real colonel is a variety that has won the trust of many summer residents and gardeners. Its main advantages are high yield rates and unpretentious care. The fruits are tasty, healthy, suitable for harvesting for the winter and for commercial purposes.

Mironov Vasily, Togliatti
I tried many different varieties of cucumbers and concluded that the Real Colonel is one of the best. The crop is easy to care for, it rarely gets sick, and the harvest always brings good. The cucumber is tasty, juicy, not bitter, crispy and dense in pickles.
Stepin Nikolay, Engels
The real Colonel F1 is an excellent reliable cucumber variety. I have been cultivating it for four years, I have never let it down. I especially like its stable yield and long fruiting, until the end of September. Caring for the culture is ordinary, if everything is done according to the rules, then during the season you can collect many tasty fruits.
Karimova Ekaterina, Kazan
Cucumbers are praised by many. A real colonel, but as for me, there is nothing special about them. They spice up later than the others, they don't really like salting. I plant several bushes just because the cucumbers ripen until autumn. But it also depends on the weather.
Recommended entries
Seeds of bee-pollinated cucumbers
Cucumber Finger: variety description, photos, reviews
Cucumber Pasalimo
Trilogi cucumber variety: description and characteristics
Cucumber Ekol F1: description + reviews
Foliar dressing of cucumbers with urea, boric acid, calcium nitrate
Cucumber Paratunka f1
Cucumber Courage f1
The most productive cucumber hybrids
Give feedback Cancel reply
Lunar
calendar 2021
January February March April May June July August September October November December
Recommended entries
The best yielding self-pollinated cucumbers for open ground
Feeding tomatoes and cucumbers with yeast
Cucumber varieties with bunched ovary
Cucumber Herman f1