Cucumber is one of the most common vegetable crops that gardeners love so much. Cucumber Herman is a prize-winner among other varieties, thanks to its high yield, its taste and the duration of fruiting.

Characteristics of the variety


The hybrid variety of cucumbers German F1 was allowed to grow on the territory of the Russian Federation back in 2001, and during this time he managed to catch the fancy of both amateurs and experienced gardeners, without yielding his leadership to this day. German F1 is a versatile variety that is suitable for growing in greenhouses, outdoors and farms in large areas. 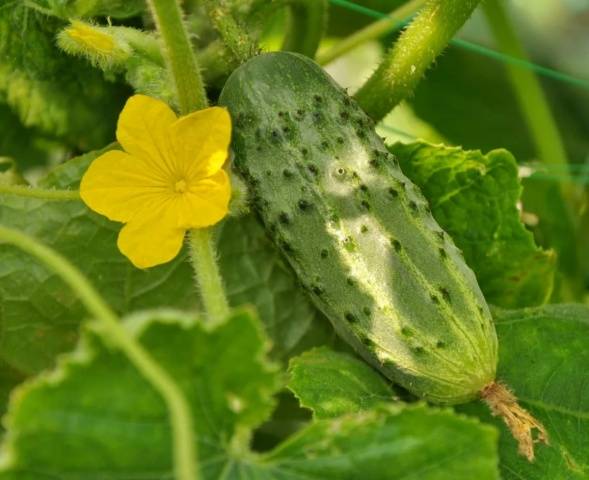 The description of the German F1 cucumber variety on the package is incomplete, so you should study all the subtleties of this hybrid.

An adult cucumber shrub grows to a medium size and has a growing endpoint of the main stem.

Attention! Flowers of the female type, do not require pollination by bees, bright yellow in color.

The leaves of the bush are medium in size, dark green. The cucumber Herman F1 itself is cylindrical in shape, has an average ribbing and moderate tuberosity, the thorns are light. The rind is dark green in color, has a slight mottling, short white stripes and a slight bloom. The average length of cucumbers is 10 cm, diameter is 3 cm, and the weight is not more than 100 grams. The pulp of cucumbers has no bitterness, with a sweetish aftertaste, light green color and medium density. Due to its taste, the German cucumber variety is suitable not only for pickling for the winter, but also for fresh consumption in salads.

Storage is possible for a long time, yellowness does not appear. If the harvest is late, they grow up to 15 cm and can be on the bush for a long period. Cucumber variety German F1 has good performance for transportation even over long distances.

This cucumber variety is immune to powdery mildew, cladospornosis and mosaic. But due to the possibility of damage by aphids, spider mites and rust, preventive measures must be taken for the cucumber of the hybrid variety German F1. 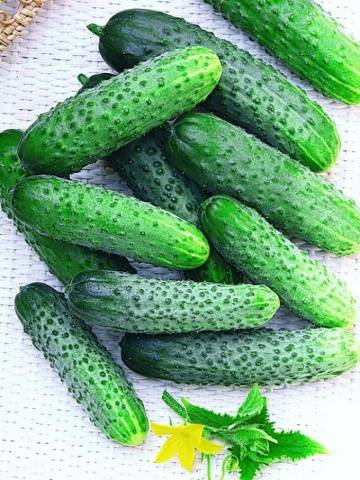 
Initially, the seeds of cucumbers of the hybrid variety Herman F1, using the pelleting procedure, are treated with thiram (a protective shell with nutrients), so no additional action with the seeds is required. If the seeds are naturally white, you may have bought a fake.

It is possible to grow German F1 cucumbers in summer cottages and on large farm areas. Due to the fact that the plant is parthenocarpic, its cultivation in a greenhouse is possible even in winter. It takes about 35 days from germination to the first cucumbers. The active mass fruiting of cucumbers of the hybrid variety German F1 begins on the 42nd day. To prevent burns in summer, it is necessary to think over the sowing site in advance or arrange additional shading (sow corn next to it, come up with a temporary canopy, which is placed in the abundant sun). When grown in a greenhouse, cucumbers need to be watered 2-3 times a week, but in the open field - more often, as the soil dries out. After each watering, mulching must be done around the bush. Under good conditions from 1 m2 up to 12-15 kg of cucumbers can be harvested, and the hybrid variety German F1 will bear fruit from the beginning of June to September. Harvesting can be done manually and with the help of agricultural technology. 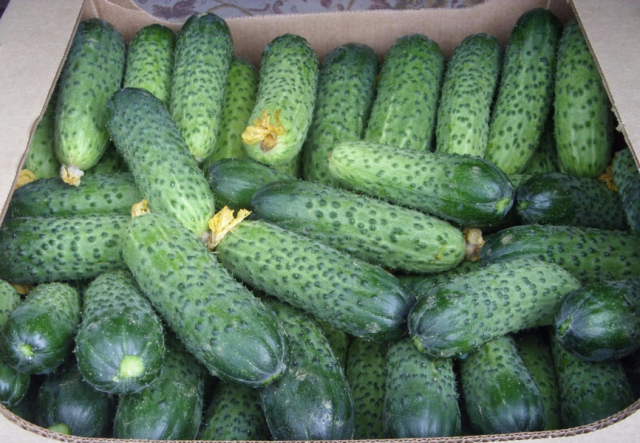 
Growing cucumber Herman F1 will not make it difficult even for a beginner. Due to the special coating, the seeds of German cucumbers do not require additional procedures before sowing, and the germination rate is more than 95%, therefore, when planting directly into the ground, the seeds should be placed one at a time, without subsequent thinning.Various types of soil are suitable for sowing, the main thing is that there is a sufficient amount of fertilizer. The earth should warm up to 13 ° C during the day, up to 8 ° C in the dark. But the air temperature should not drop below 17 ° C during the day. The approximate planting period for German F1 cucumber seeds in early May, depending on the regions, may vary.

The earth must be well dug, it is advisable to add sawdust or last year's leaves. This procedure is necessary for aeration so that the soil is filled with the required amount of oxygen. Immediately before sowing seeds of German F1, humus, peat or mineral fertilizers are placed in the holes. Then the sowing site is watered abundantly. Seeds are sown at a distance of 30-35 cm from each other, 70-75 cm should be left between the rows, which will make it convenient to harvest. The sowing depth should not exceed 2 cm. If the seeds of the hybrid variety German F1 are sown outside the greenhouse, the seeds can be covered with a film to maintain the temperature, after the sprouts appear, it should be removed. 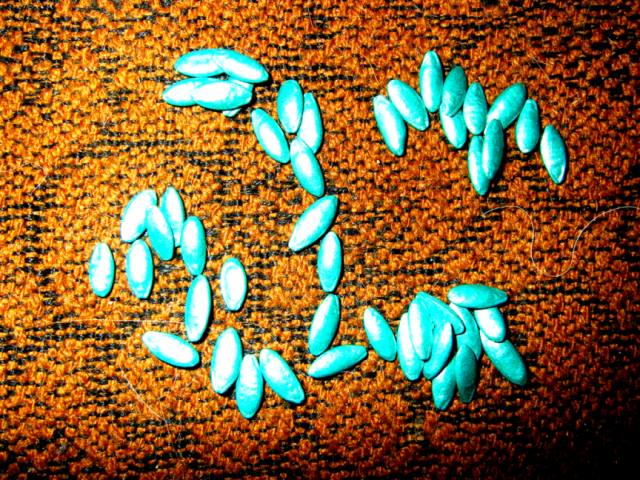 
Seedlings of cucumbers of the hybrid variety Herman F1 are grown for an earlier harvest. Seeds germinate in favorable conditions in advance, and already grown cucumber bushes are planted in the main place of growth.

Tanks for German F1 cucumber seedlings must be chosen with a large diameter, so that when transplanting, leave a large clod of earth on the roots in order to avoid damage to them.

Separate containers are filled with a special substrate intended for growing vegetables or only cucumbers. Thus, you can be sure that the soil is filled with the necessary minerals for the full growth and development of cucumber seedlings. Seeds are sown to a depth of about 2 cm, then covered with cling film or glass to maintain the required temperature and humidity (greenhouse effect) and placed in a sunny place. 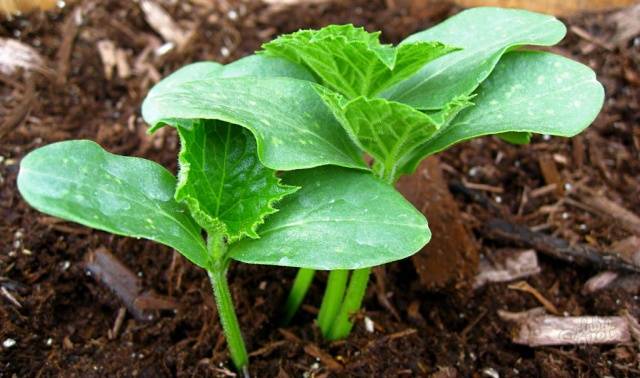 After the development of sprouts, it is necessary to remove the cover from the seedlings of Herman F1 cucumbers and slightly lower the temperature in the room in order to avoid stretching the seedlings, otherwise the stem will become long, but thin and weak. After about 21-25 days, the cucumber seedlings are ready for transplanting into a greenhouse or open ground.

Attention! Before how to plant cucumbers Herman F1, make sure there are 2-3 true leaves on the seedlings.

It is recommended to plant seedlings of cucumbers of the hybrid variety German F1, cotyledonous leaves in pre-prepared holes. As with seeds, the planting site needs to be fertilized and watered.


For the convenience of harvesting and its increase, it is necessary to correctly form a cucumber bush and further monitor its development. Form it into one main stem. Due to the excellent trailing ability of the Herman F1 cucumber, it is necessary to use trellises. This method is suitable for both open field and greenhouse cultivation.

Twine is often used in greenhouses. Natural material is used for its harness; it is not recommended to use nylon or nylon, as this material can damage the stem. The thread is tied to the posts and the length is measured to the very soil. The end must be stuck into the ground near the bush to a shallow depth, carefully so as not to damage the roots. For the future garter of lateral shoots, separate bundles 45-50 cm long from the main trellis need to be made. A separate tourniquet is made for each cucumber bush. When the cucumber bush does not exceed 40 cm in height, it should be carefully wrapped around the twine its stem several times. As the seedlings grow, the procedure is repeated several times until it reaches the trellis. 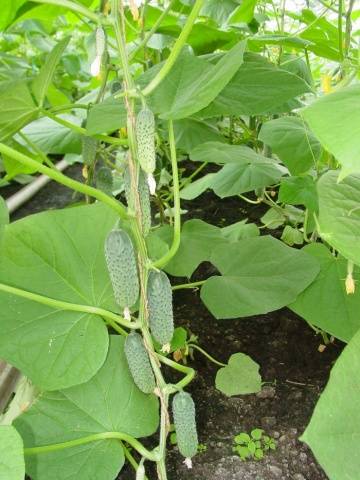 So that the grown stem of the bush does not interfere with the passage between the rows and for greater productivity, it is necessary to pinch off its edge. You should also remove all shoots and ovaries that form in the first four leaves of the bush. This is necessary for the formation of a strong root system, since nutrients and moisture enter the cucumber bush through it.In the next two sinuses, 1 ovary is left, the rest is pinched. All subsequent ovaries are left as they are for the formation of the crop, usually 5-7 of them per node.


To improve the yield of the hybrid variety German F1, it is necessary to apply different types of fertilizers, from sowing seeds to fruiting. There are several types of feeding:

Herman F1 cucumber is an excellent choice for beginners and avid gardeners. Early maturity and high yield will make it possible to enjoy bright taste for a long time. And the pleasant reviews about Herman cucumbers confirm this once again.


Constantine, 52 years old, Ryazan region
Recently I tried a hybrid variety of cucumbers German F1 and was very pleasantly surprised with the result. He grew cucumbers in a greenhouse alone, without outside help, observed all the rules and regulations. It turns out that this is not difficult at all. I tied it up, pinched off the top, the bushes no longer grew, and it was convenient to walk between the beds. The fruits appeared earlier than those of the neighbors. But it doesn't matter, I treated everyone with the first cucumbers, since the harvest turned out to be great. Delicious, crispy, aromatic cucumbers are obtained. Salads go over both cheeks. I shared a photo of the harvest and a pleasant review about German cucumbers to my neighbors, now they grow this variety and are very happy.
Vladislav, 34 years old, Rostov
I am engaged in the cultivation of Herman F1 cucumbers on my small farm. Although the seeds are not the cheapest, they fully pay off due to their yield. Cucumbers have a good shelf life, so I don’t worry about spoiling them. Even if you do not harvest for a long time, they do not outgrow or turn yellow.
Galina, 63 years old, Samara
I heard about the Herman F1 cucumber variety from a neighbor and immediately tried to grow it in my garden. I liked the cucumbers that grew. Marina for the winter, but they still remain crispy and tasty. Children and grandchildren are very happy with the taste of cucumbers and always take a supply for themselves.
Recommended entries
The best self-pollinated cucumber varieties for the greenhouse
When to plant cucumbers in a summer cottage in the Moscow region
Seeds of cucumbers for greenhouses of the Moscow region
Soft cucumbers in the greenhouse: causes and remedies
Soil for seedlings of cucumbers
Cucumber varieties with bunched ovary
The best varieties of cucumbers for the balcony
Folk remedies for feeding cucumbers
Cucumber Boyfriend F1
Give feedback Cancel reply
Lunar
calendar 2021
January February March April May June July August September October November December
Recommended entries
The best yielding self-pollinated cucumbers for open ground
Feeding tomatoes and cucumbers with yeast
Cucumber varieties with bunched ovary
Cucumber Artist F1