The best varieties of zucchini for Siberia for open ground

Diversity varieties of zucchini so large that it allows gardeners to choose the right crop for the ripening time for their garden. But the most important thing is the place of cultivation. Modern varieties and their hybrids bred by breeders can grow not only in regions with a temperate climate, but also in the Urals or even in Siberia. A tasty and healthy vegetable can be consumed for a long period, if the variety of zucchini for open ground in Siberia is correctly selected.

Rating of the best Siberian zucchini

Cold rains lead to the disease of zucchini in open beds. Usually the plant is affected by rot or fungus. Most of all, this problem occurs in northern regions with a difficult climate. But this does not prevent Siberian gardeners from successfully growing zucchini for themselves and for sale. There are specially bred zucchini for Siberia for open ground, resistant to harsh climatic conditions. Now let's try to consider the best of them. 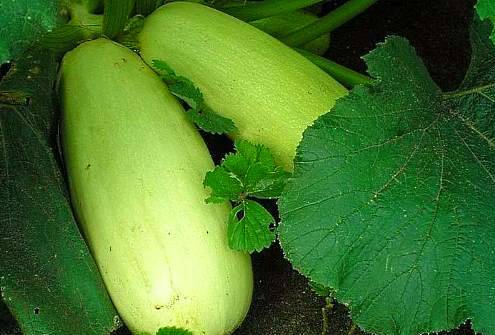 This variety of zucchini is old and proven by many gardeners. The fruit ovary after about 50 days from the moment the seeds germinate, assigns the vegetable to the mid-early ripening period. Zucchini are intended for universal use. The plant is so adapted to the Siberian climate that many diseases are simply not afraid of it. 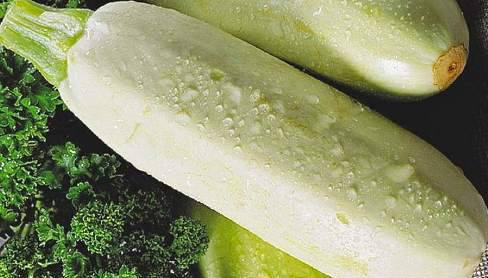 An early-ripening vegetable withstands cool weather, for which it gained its popularity. The first fresh zucchini can be plucked from the bush at 36 days from the moment the sprouts appear. The plant has a small bush. In case of sudden cold snaps, the aerial part can easily be covered with agrofibre or film. 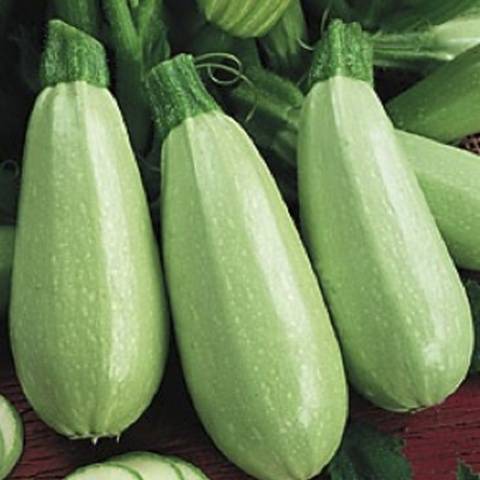 Another early Siberian vegetable with good yields and tasty fruits. The plant tolerates cold weather. After about 38 days, the fruit can be picked. A fully ripe zucchini weighs about 1.5 kg. Many housewives fell in love with the variety because of the amicable ripening of the fruits, which have a universal purpose and can be stored for a long time.

These three varieties can be called the favorites of many Siberian gardeners. But the variety of zucchini for Siberia is not limited to this, and we continue to get acquainted with the best varieties. 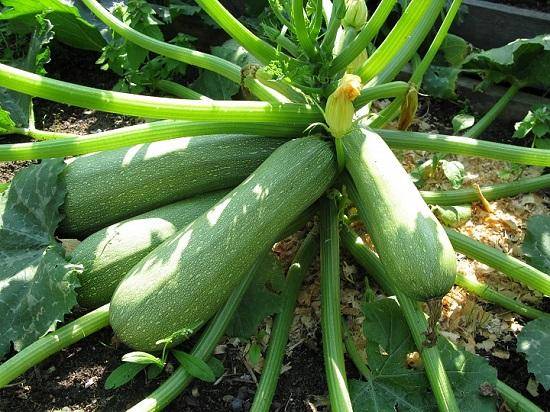 The shrub plant has a small aerial part. The vegetable is characterized by excellent taste due to its thin skin and delicate pulp. An adult zucchini weighs up to 900 g. The dignity of a zucchini gives a good immunity to bacterial diseases.

Important! The thin peel does not allow the plucked fruits to be stored for a long time, so it is better to use them immediately for their intended purpose. 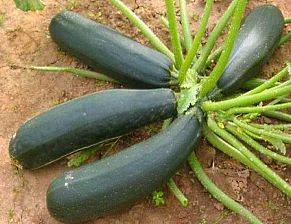 The green fruit belongs to the zucchini. A peculiarity of the color is small white dots. The plant is almost never exposed to rot, brings large and early harvests. An adult zucchini weighs about 800 g. It gained popularity due to its crispy juicy pulp with a sweetish aftertaste.

Despite the fact that the zucchini belongs to the early varieties, the fruit is excellent for conservation. The bushy plant brings its first harvest 40 days after the seeds germinate. The structure of the bush is compact with limited lateral lashes. This allows you to grow zucchini in small beds near the house.The white vegetable has a juicy, but not very dense pulp. The mass of a mature zucchini reaches 1 kg.

Important! The plant is not susceptible to many diseases.

An early variety allows you to harvest in 36 days from the moment the seeds germinate. The shrub plant tolerates cold weather and even in the harsh climatic conditions of Siberia bears thin-barked fruits with tender pulp. Ripe zucchini weighs about 1.3 kg.

Having considered the optimal, one might say, the most seasoned varieties of Siberian zucchini, it is time to briefly touch on the issue of planting a plant in open beds.

Attention! To get an early harvest in Siberian climatic conditions, sowing seeds for seedlings is carried out at the end of April, and planting of plants on the beds is optimal by the end of May and beginning of June. To prevent seedlings from wilting, it is better to plant them on a cloudy day or make a light shade structure over the plants.

In this video you can see a zucchini variety "Tenderness":

A little about growing zucchini

Experienced gardeners argue that there should be no problems with growing zucchini even in Siberia. A properly selected variety will yield a crop with minimal maintenance anyway.

Zucchini can be sown on the beds with seeds, only the seedlings must be protected from the coolness of the night. To do this, install arcs from the wire and cover the bed with a transparent film. Alternatively, the sprouts can be hidden under trimmed PET bottles.

For early vegetables zucchini is best planted with seedlings on an open bed. If this happens at the end of May, the plants are covered with foil. Under such a shelter, the zucchini will grow until about mid-June, until the morning frost ends.

As for the beds, it is better not to plant zucchini in the lowlands. There is usually a lot of moisture in such places, and the soil itself is much colder. Here, the plant is most susceptible to fungal diseases, and rot will be 100% provided. Plants will begin to turn yellow, and the fruits will be covered with small spots that turn into cracks.

It is better to plant seedlings in a section of the garden protected from the wind, preferably from the sunny side. Before planting zucchini soil feed a mixture of 500 g of humus and 50 g of superphosphate.

Important! Healthy seedlings can be obtained by growing them at temperatures from +17 to + 20 ° C.

Regular zucchini varieties have long strings with developed lateral shoots. Such plants take up a lot of space in the garden, which is very inconvenient for small areas. Breeders have developed bush varieties that allow for bountiful harvests in limited areas. The culture has taken root well in the harsh climatic conditions and is in demand by many gardeners in Siberia.

Attention! Bush squash grows in a small area. The plant of some varieties feels decent on an area of ​​50 cm2. However, it is impossible to place the bushes close to each other. This threatens to reduce yields.

The optimal area for one bush plant is 1 m2... The fact is that wide leaves are formed at the top. They are collected together, but occupy a decent area and require fresh air, sunlight, and a certain amount of moisture. The root system also has its own structural feature and does not grow in depth, but in breadth. Planting zucchini close to each other will limit the development of each bush, which will affect the yield. 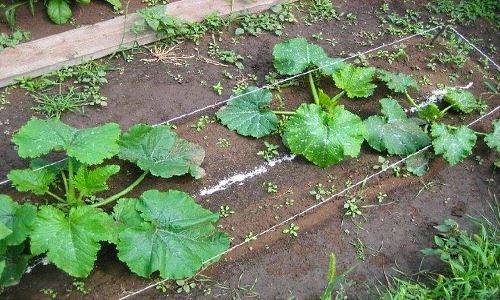 Advice! Shrub varieties do not like overripening of fruits on the plant. Zucchini degrades its taste and takes a lot of nutrients from the plant.

It's time to get acquainted with the varieties of bush squash, which have proven themselves well in Siberian lands. The best crops include:

Advice! The fruits of the bush squash of the "White" variety are suitable for children's and dietetic cuisine. The vegetable is good for people with diabetes. 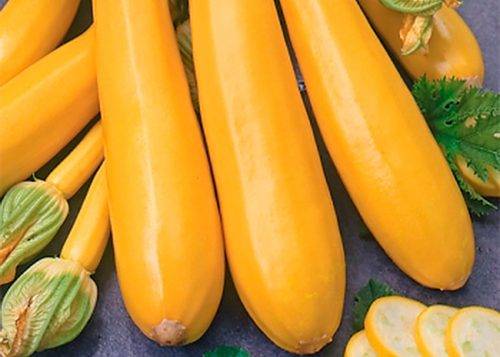 Separately, I would like to consider this variety of bush zucchini, as a favorite vegetable of gardeners. Firstly, the fruits are delicious and rich in sugar. Ideal for winter storage and fresh consumption. Secondly, the golden vegetable is used for decorative purposes. To do this, the zucchini is cut from the bush 6 days after the ovary appears.

Breeders have instilled in bush hybrids all the best parental qualities. These plants tolerate the Siberian climate best and yield good yields. Let's take a look at some of them:

Separately, you can consider some interesting varieties of hybrids that surprise with the unusualness of the fruits. 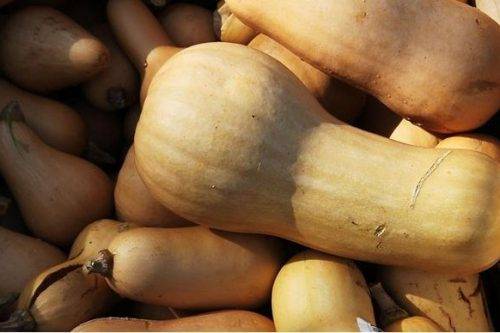 The hybrid surprises with the shape of the fruit that resembles a large pear. The plant bears early orange fruits that should long-term storage... Fruiting is very long.

The striped squash is a favorite hybrid of Siberian gardeners. The plant produces early bountiful harvests. The important thing is that the fetus is dietary. Zucchini is recommended for people with liver disease. 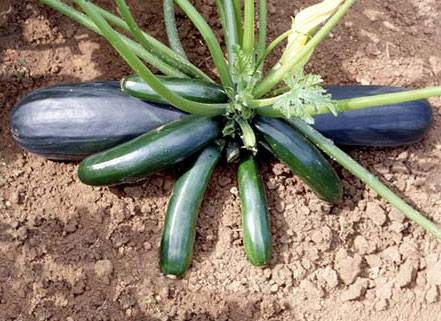 A very interesting hybrid of Italian breeders has a cold hardiness. Ripe zucchini has an excellent sweet taste and juicy flesh. Produces the most fruit when grown under plastic.

Advice! The fruits of the hybrid do not deteriorate for a long time during storage. Zucchini is ideal if you need to make a certain stock in the cellar. 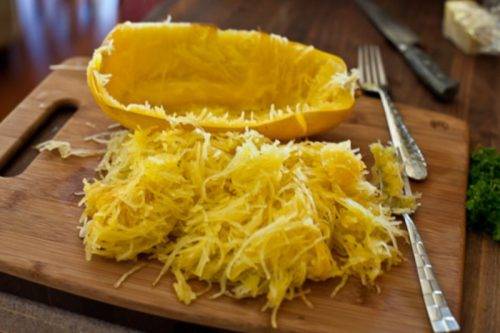 The fruits of this variety differ in taste and pulp structure from ordinary zucchini. During cooking, the pulp breaks down into fibers that resemble spaghetti. The plant loves the sun, and sheds fruits when there is a lack of light or in conditions of high humidity.

In the video you can see bush zucchini:

It is impossible to consider all varieties of zucchini suitable for growing in Siberia. The work of breeders brings many new hybrids, and among them you can experimentally try to choose the best varieties for yourself.