Every year, gardeners spend a lot of time looking for the perfect variety that meets their specific requirements. Let's talk about potatoes. If we take the five most popular varieties in our country, then Adretta will definitely be among them. It takes leading positions in the top lists on various sites for a reason. We will find out what it is, and why it is often advised to grow exactly Adretta potatoes. A description of the variety, photos, reviews and information on growing these potatoes will definitely be useful. 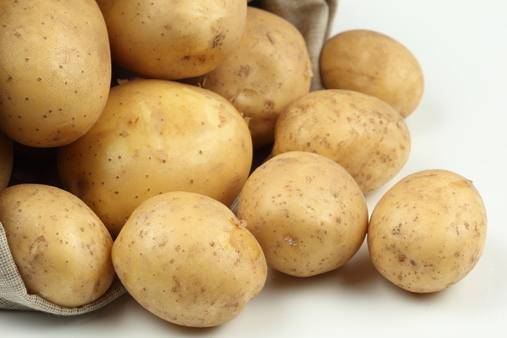 Potatoes "Adretta" were bred in Germany not so long ago, they are about twenty years old. During this time, this table potato gained popularity not only at home, but also abroad. The thing is that root crops are famous for:

Every property matters. The flesh of the potato is yellow. Previously, tubers with this color of pulp were used only for livestock feed and were considered tasteless. For a long time, only "Adretta" was a variety that people not only liked by their taste, but also impressed with their crumbness and tenderness. This is influenced by the average starch content, about 16%. On the basis of this variety, a large number of new ones were bred, which did not always retain their taste, but were also quite good.

A few words about fodder potatoes

Today, not only gardeners, but also potato buyers are already accustomed to potatoes with yellow flesh and even a little purple, and not only the usual white, but two decades ago "Adretta" was a unique variety. Before its appearance, yellow potatoes were used only for feed in livestock farms, since their taste was unimportant.

German breeders in the late 90s made a splash, as the Adretta variety was the first to have a yellow heart and was unusually tasty. As experts say, it is this quality that has become the determining factor in such a rapid growth in popularity.

Consider a comparative table of parameters for a given potato variety. This will help those summer residents who have not yet decided on the choice of the variety. Ripening period, technical details and small nuances - all this is very important even when growing such a familiar crop as potatoes.

The roots themselves have small eyes, the skin is very thin, has a yellowish tint. Many gardeners have at least once seen the "Adretta" potatoes, the description of which we have just given, on store shelves. It is often grown on an industrial scale.

Unpretentiousness is a quality that is very much appreciated by everyone who at least once was engaged in the independent cultivation of vegetables and root crops. This is a very complex process that requires attention, patience and a lot of work.Engaged in cultivation, every gardener hopes to get a rich harvest of excellent quality with high keeping quality. Unfortunately, this is not always the case, especially for beginners.

In order for the harvest to be rich and healthy, it is not enough to choose the right variety. Proper cultivation is the key to success. Potatoes of this variety have excellent agrotechnical qualities:

Important! This variety can be planted in mid-spring if the soil is warmed up. He will harvest in early July, which is considered a fairly early date. 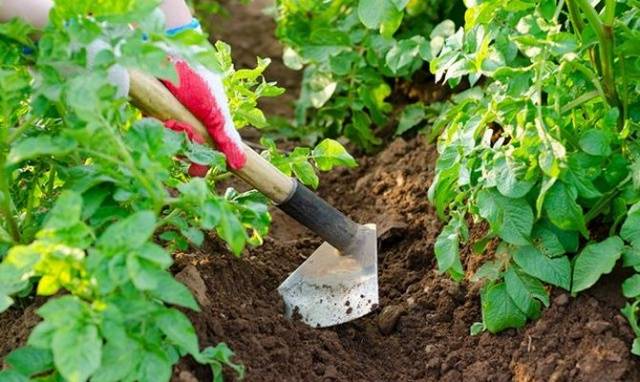 Before sowing seeds, it is recommended to soak them in water for 1-2 days. This will allow them to ascend faster. The water should be at room temperature.

Advice! Do not purchase seed potatoes by hand, they may be of poor quality. In specialized stores, Adretta potatoes are always present on the shelves.

The best soils for her:

You should not add manure that is destructive to taste into the soil. It is necessary to pay attention to groundwater as well. They should be located no higher than one meter. Seeds of "Adretta" are tubers that can be planted in open ground in April if you live in the southern regions. You can pre-harden them:

Advice! If the seed is very small, the potato tubers can be cut into pieces. Each of them must contain one eyelet.

If the gardener lives in a more severe climate, it is advised to plant potatoes of this variety first in boxes, then dive and move them into the ground. Although you can wait for the May heat, especially since the variety ripens quickly enough. In order to protect the plant from additional viruses, the tubers should be sprayed with a fungicide before planting.

The optimal temperature conditions for growing the Adretta variety are as follows: 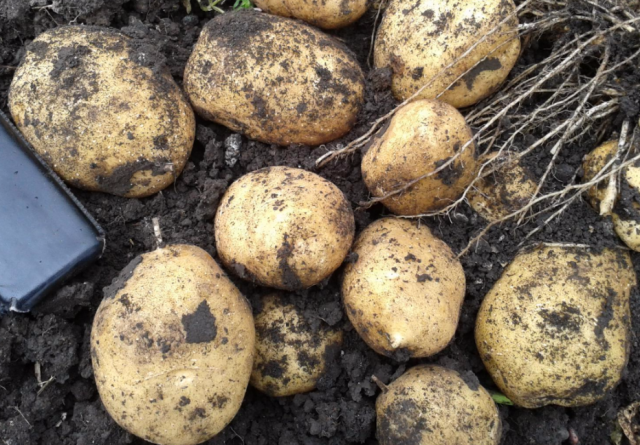 It is advisable to carry out top dressing carefully, without overdoing it. During the rooting period, they are required. Ash and superphosphate are perfect for these purposes. The latter is also used during the flowering period. We draw your attention to the fact that the "Adretta" variety requires timely watering and loosening of the soil. It is not genetically protected from the Colorado potato beetle, but suffers little from it.

It is also necessary to control weeds and sow the plant in open areas. Potatoes are very fond of the sun. If the area is shaded, the tubers will be small and the bushes will stretch upward.

In general, it is not difficult to grow it, some tips from a gardener who bred this potato on his own are presented in the video below.

In addition to questions about the cultivation of the variety, many summer residents are concerned about the storage and preservation of quality during this period. Let's talk about this topic.

Do-it-yourself potatoes on the site, I want to save as long as possible. They sort it out, cover it on cold days. For Russians, this root vegetable is of great importance, as it is used very often in food. For every citizen, it is desirable that potatoes are not only stored for a long time, but also not lose their taste. As for the “Adretta” variety, it corresponds to these qualities. 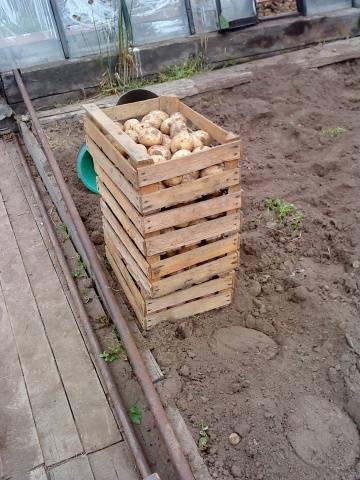 Attention! This variety is perfectly stored, it also retains useful qualities. He is almost not afraid of rot, which affects a large number of good yielding varieties.

When growing, it is not uncommon for the temperature outside the window to drop. Varietal potatoes get an unpleasant sweetish taste from this. In a situation with this variety, you can not be afraid of small temperature drops.

This quality is ideal for both growing and storage.It is necessary to place the ripe roots of "Adretta" in a cellar with excellent ventilation. This also applies to other varieties of potatoes. Previously, the crop is sorted out for rot and damage.

Often, coming to a gardening store, buyers are faced with the fact that they are offered to replace this favorite variety with another. It can be called "New Adretta" or "Gala". It was really bred on the basis of German potatoes, but it has some differences and is defined as an independent variety type. 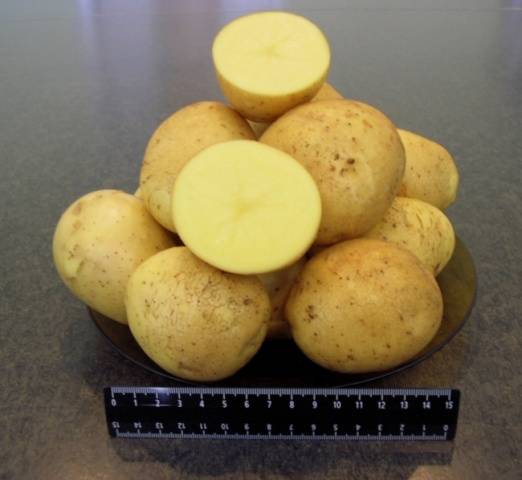 Gala potatoes are represented by the same yellow tubers with dark yellow pulp. It is also tasty, keeps well and is almost the same in care. However, its yield is less, therefore, when grown under the same conditions, "Gala" will yield a yield of up to 26 kilograms per square meter. It should be noted that this is a lot. This variety is also one of the five most the best.

The “Adretta” variety has been grown for a very long time and has not lost its popularity throughout this time. As we managed to notice, we tried to improve it by breeding new types. It is very difficult to gain a foothold in the market, but Adretta not only retained its dominant position, but also managed to win the hearts of newcomers. Consider a few reviews of those who have grown this potato variety more than once.

Valeria Frolova, Novorossiysk
We plant Adretta in April, when the weather is already warm. This potato is considered a long-liver, since my mother grew it fifteen years ago. The potatoes are delicious and ripen quickly. I know of cases when, when landing "Adretta" in the Urals under a film cover, these potatoes endured frosts down to -3 degrees. Of course, this does not happen with us. My neighbors at the dacha plant Adretta potatoes every year in the month of May. It ripens quickly, so there is no need to rush.
Lev Davydov, Saratov
I recommend boiling young potatoes of this variety in their uniforms and eating with the peel, since it is rich in B vitamins and other useful substances. I have never seen potatoes tastier, so “Adretta”, “Tuleevsky” and “Gala” always grow on my small plot. I keep it all autumn and winter, enough for the spring. I will note the disadvantages: • instability to viral diseases; • the seed must be renewed every 5 years, as the tubers become smaller over the years. It's not so scary. I fight the Colorado potato beetle every year, and in general, the variety has never failed.

Despite the fact that the description of the potato variety contains small drawbacks, this does not affect the popularity of the Adretta root crop. Often, gardeners grow several varieties at once, and at the end of the season they make a comparative analysis. This is also appropriate in this case.

Potatoes of this variety are worthy of attention and highest appreciation. If you have never planted Adretta, be sure to try it in the spring. The taste will not leave anyone indifferent, small eyes make it easy to peel the tubers before cooking, and the growing process will not be difficult. It was these qualities that initially attracted gardeners from various regions.