Diseases of onions and green onions: treatment, fight against them, photo, description

Treatment of onion diseases is carried out prophylactically and at the first alarming symptoms. Viral and fungal ailments can quickly destroy plantings.

Fungal diseases of green onions and their treatment

The peculiarity of onions and green onions is that the culture rarely suffers from fungal diseases. The plant contains a large amount of phytoncides that disinfect the soil and suppress pathogenic microorganisms. However, some ailments still remain dangerous for onions.

Peronosporosis is a disease caused by the causative agent Peronospora destructor Casp. Fungal spores persist for a long time in plant residues in the beds and in the bulbs themselves, and in the warm season they begin to actively develop. You can recognize the disease by the shapeless yellowish, brown, reddish-brown or purple spots that appear on the leaves, and by the whitish or gray powdery bloom on the back of the plates.

Downy mildew symptoms appear on green onions, usually in the spring, in conditions of high humidity and sudden changes in temperature. The leaves affected by the disease become deformed, dry out and crack. If untreated, peronosporosis can lead to the death of entire beds. 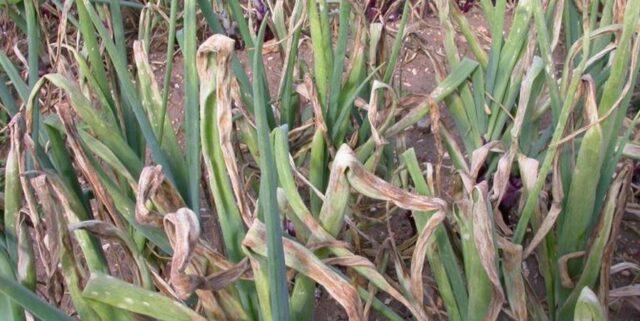 Peronosporosis usually begins from the top of the onion.

Downy mildew therapy is carried out with copper preparations. In particular, Oxyhom is well suited - 20 g of the product is diluted in a bucket of water and sprayed twice a month. Severely affected plants are previously removed from the site.

Attention! If the onion is grown "on a feather", it is impossible to treat with chemicals. Peronosporosis is fought by warming up the harvested crop at 40 ° C for 12 hours.

Among the diseases of onion on a feather, Alternaria should be noted, which provokes the fungus Alternaria porri. The disease usually affects mature plants with old leaves, the plates are covered with white spots with a light border. Over time, these marks darken, grow and merge with each other. Green feathers crack, break and dry out, the same happens with arrows. Sometimes alternariosis affects the bulbs, and then first bright yellow, and then wine-red spots appear on them. 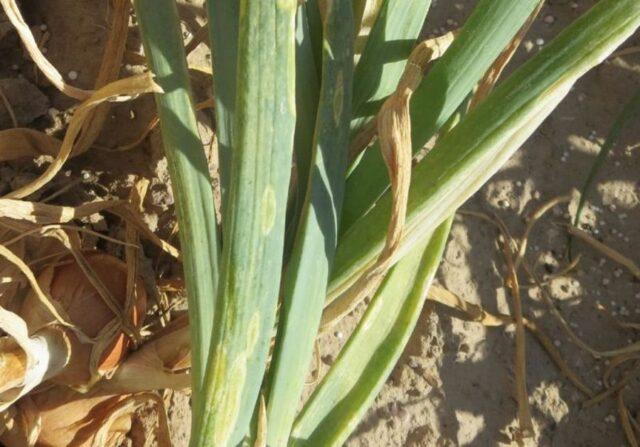 The disease develops most often in plant debris in damp conditions. For the treatment of the disease, spraying with Bordeaux mixture or copper preparations is carried out. At the same time, they control humidity - reduce the frequency of watering, organize good drainage in the beds, or transfer the onions to a drier place.

Onion rust is caused by the fungus Puccinia porri, which hibernates directly on the plant or in the fallen leaves in the beds. At a temperature of 15-20 ° C and at high humidity, the disease spreads very quickly through the plantings. You can recognize it by the numerous reddish-red dots on the leaves of the plant. Gradually, the marks darken and turn black, and the affected plates dry out. 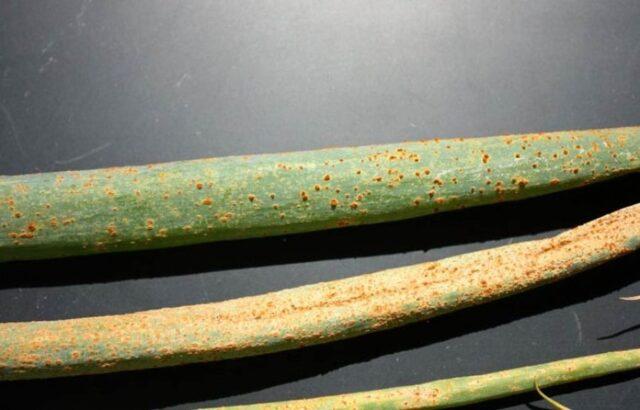 For the first time rust on onions appears at the end of spring.

Rust treatment is carried out with Bordeaux liquid or copper oxychloride. Among the good remedies for onion disease are the drugs Cineb and Captan. Spraying is carried out at least twice with an interval of a week; feathers must not be cut for food purposes during this period.

Advice! To prevent rust, before planting onions in the area, it is recommended to treat it with fungicidal agents or a weak solution of potassium permanganate.

Fungal diseases of the onion bulb and their treatment

Some fungi affect the stems and leaves of onions, others develop outside or inside the underground part. The latter are especially dangerous, since such diseases are difficult to notice in time and immediately begin treatment. Only with regular inspection of the beds is it possible to identify alarming symptoms in the early stages of the development of fungi.

Aspergillosis, black mold or black mold rot, is a dangerous disease caused by the Aspergillus fungus. The disease is difficult to recognize and treat, because in the early stages, discoloration of the bulb neck becomes its only symptom. The main signs appear after harvesting - a black powdery coating appears under the husk and between the juicy scales, which is a spore mass.

With aspergillosis, the bulbs become watery or dry out completely

Aspergillosis develops in warmth and high humidity, in a poorly ventilated storage area. The bulbs affected by the disease cannot be treated, they can only be disposed of. The fight against the fungus is mainly prophylactic. Planting material is thoroughly disinfected before being transferred to the garden, and the harvested crop is dried qualitatively and stored in a cool and dry place with good ventilation.

A common onion disease during storage is neck rot, which develops through the fault of the pathogen Botrytis allii. As with aspergillosis, the disease practically does not make itself felt during the cultivation, therefore it is difficult to carry out timely treatment. Only with a close examination of the plantings can you notice the yellowing of the necks of the plants. But after harvesting, the bulbs begin to rot quickly, their scales become loose, and an unpleasant odor appears. If you cut the diseased head in half, then dark areas will be visible on the neck, at the base and on the sides. 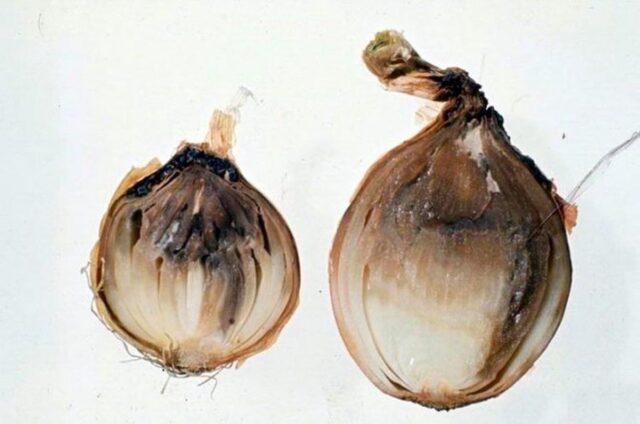 Neck rot penetrates onions through cracks and other damage

Neck rot spreads quickly in high humidity and moderate temperatures. The disease manifests itself most strongly on assembled heads, if they are not fully ripe and are stored in a warm, poorly ventilated room.

There is no specific treatment for the disease, but preventive measures help protect against rot. In particular, it is recommended:

It is necessary to maintain cleanliness on the beds and remove plant residues in time.

The disease, provoked by fungi from the genus Fusarium, attacks both underground heads and green onion feathers. The development of the disease often begins with yellowing of the tips of the leaves and leads to their gradual death. Fusarium also manifests itself in the appearance of a pinkish bloom on the bulbs, in darkening and decay of the roots. The culture almost stops in development, the heads do not mature on time and remain small.

The treatment of fusarium is to remove the affected bulbs from the beds. Affected plants need to be burned, and the remaining specimens should be sprayed with Quadris or Fundazol preparations.As a preventive measure, it is recommended to treat onions before planting against diseases by soaking in a fungicidal solution. 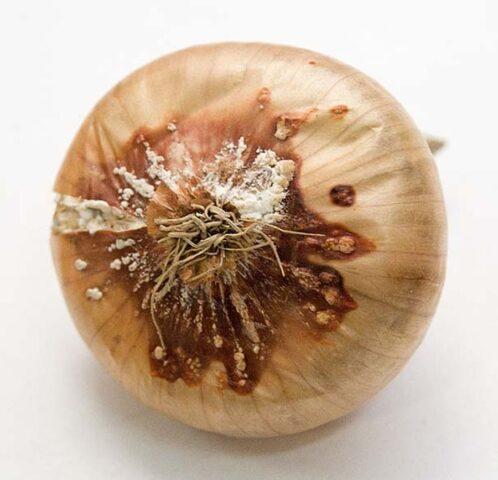 The disease occurs under the influence of fungi of the genus Penicillium, penetrating the bulbs through superficial damage. You can recognize green rot by the pale yellow areas and weeping spots on the heads, which quickly become covered with a blue-green spore-bearing bloom. If you cut the onion in half, you can see gray, brown or yellow patches on the scales. As the disease progresses, the heads become hard on the outside and soft on the inside, and begin to exude a characteristic moldy smell. 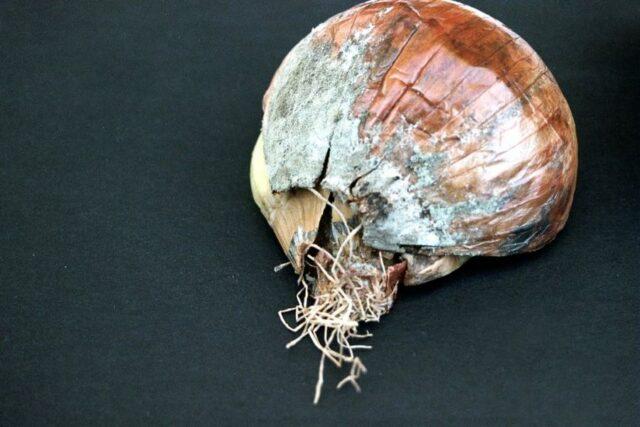 It is not possible to save an onion already affected by a fungal disease. Therefore, the treatment consists in prevention - the heads must, first of all, be protected from injuries and abrasions. After harvesting, the onions are thoroughly dried from moisture and kept in a cool room with good ventilation.

In addition to fungal infections, viral diseases harm onions in the garden. They usually do not respond to treatment. Affected plants are simply removed from the site to prevent further spread of the disease.

A viral disease, for which there is no cure, is caused by the pathogen Allium virus I Smith, and the garlic mite most often becomes the carrier of the infection. The disease affects onion feathers and its underground parts. The main symptoms are light yellow spots and light green mosaic stripes on the stems. With this disease, feathers curl around the edges and dry out, the onion stops growing and does not release new leaves. 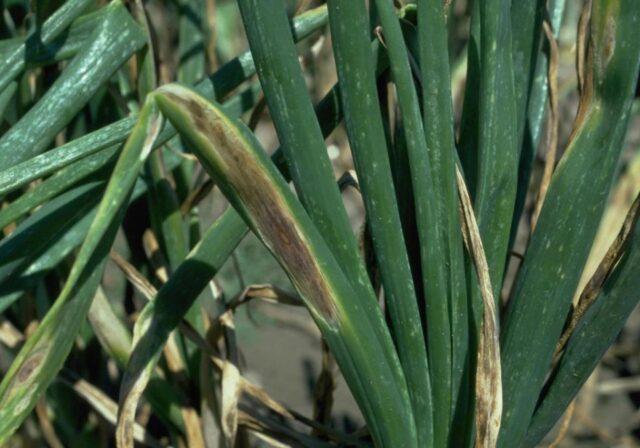 Most often, a mosaic infection appears against the background of late planting or with excessive thickening of the beds. Treatment is carried out by getting rid of the affected specimens. The remaining healthy onions in the garden are treated with insecticides to eliminate the garlic mite, and a strengthening phosphorus-potassium dressing is applied.

The disease is caused by the Onion Yellow Dwarf Virus. You can recognize the ailment by the yellow stripes on the leaves, sometimes covering the entire plate as a whole. The feathers of green onions are flattened, shriveled and lodged under the influence of the virus. The underground parts of the culture retain their density, but become smaller in size. 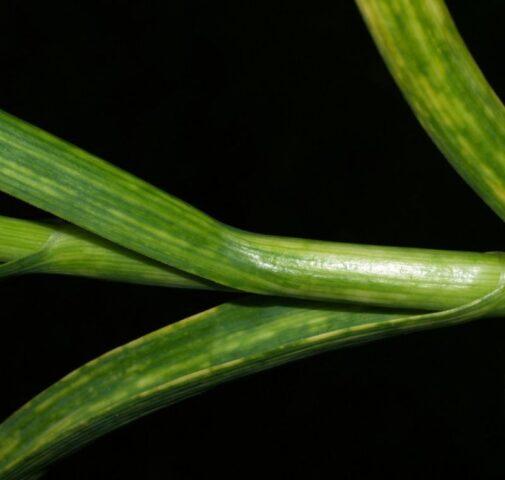 The classic treatment for the injured bow is not carried out. Infected specimens are removed from the site and burned to stop the spread of the virus. A good prevention of yellow dwarfism is to grow onions from pure-grade seeds - the disease is not transmitted with them.

Diseases of onions often manifest themselves in the late stages - after the harvest, when there is no point in treating. Therefore, high-quality prevention becomes the main measure of control.

Treatment of the site and onion seeds from diseases

In many cases, fungi and viruses infect onions during the planting phase. The problem could be infected soil or infected seeds. So that later you do not have to look for methods of treatment, before starting to grow a culture, you must:

To protect the onion from disease, it is necessary to thoroughly loosen the beds every autumn. Fungal spores in this case will be closer to the surface and die during severe frosts.

It is possible to protect plantings from diseases and avoid complex treatment if the basic rules of agricultural technology are observed. When growing onions, several points are of particular importance:

When growing onions, it is necessary to provide the plant with regular feeding. With a lack of nutrients in the culture, immunity decreases, and fungal diseases requiring treatment develop more often. 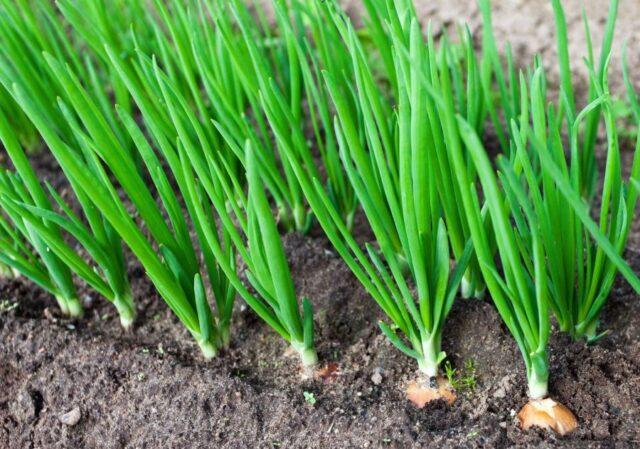 Onions in the garden should not be overfed, since an excess of trace elements in the soil also provokes the activity of microorganisms

It is usually not recommended to treat onions with chemicals for diseases - this method of treatment makes the crop unfit for consumption. However, to protect the culture from fungi, you can use some biological products with a natural and safe composition. For example, it is allowed to add Fitosporin to the water for irrigation at the rate of 15-30 ml per garden watering can. With regular weekly use, the drug will help prevent the development of fungi in the soil and contribute to the treatment of diseases at the earliest stages.

A good way to combat pathogenic microorganisms is the use of green manure. The onion area can be sown with mustard. It releases substances with antiseptic properties during the growth process and prevents the spread of fungi.

Store onions in a dark place at a temperature of about 5 ° C. In such conditions, the crop is less likely to suffer from diseases, since microorganisms cannot develop comfortably.

Treatment of onion diseases is associated with great difficulties and does not always give results. The fight against fungi and viruses is carried out mainly prophylactically, and the storage conditions of the crop are also carefully observed.