Nettle broom for a bath: benefits and harms

A nettle broom for a bath is an excellent way to fight not only rheumatism and sciatica, but also an effective remedy for skin diseases. To get the maximum result, you need to know exactly what materials can be used for the procurement, and how to make this bath "tool" correctly.

Why is a nettle broom useful?

Nettle is widely used in cosmetology, folk medicine and cooking. In addition to dishes, decoctions, shampoos, medicinal ointments and tonics are made from it.

The formic acid present in the composition of the plant acts as an antiseptic, simultaneously providing a tonic and regenerating effect. Tannins and mineral salts have a positive effect on blood flow by normalizing blood pressure. 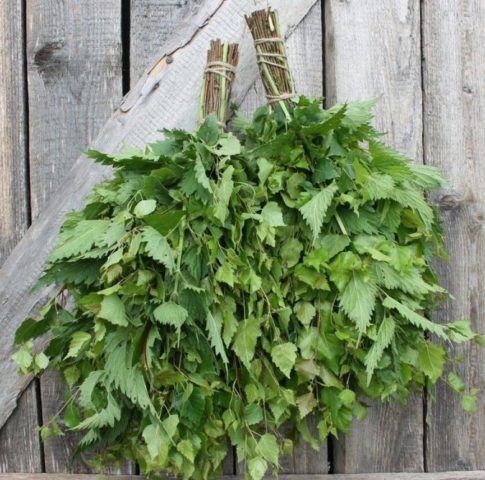 A nettle broom in a bath and steam room is used for the following health problems:

Important! To achieve a pronounced effect, you need to steam with a nettle broom regularly.

How to make a nettle broom

It is very easy to make a broom from this most useful plant. But for this you need to know when and where to collect raw materials, as well as how to steam and dry the shoots correctly.

The degree of the therapeutic effect of the broom depends on the correct collection. Collecting nettles begins at the end of May, when the stems and leaves are filled with juice. Only young strong shoots without inflorescences and seeds are selected. Cut the plant with protective gloves, preferably in the morning and only in dry weather. You should not go to harvesting immediately after rain or in intense heat, since in the second case the quality of the shoots will be worse, and the leaves, instead of drying, will simply wither.

The cut is made with a knife or scissors at about 7-10 cm from the ground. The cut shoots are carefully folded into burlap or any other dense, breathable fabric. It is not recommended to use the film. When carrying, the edges of the material are wrapped in such a way that the stems do not break.

Important! You cannot collect plants near roads, landfills and in industrial areas.

How to knit nettle brooms

Bath nettle brooms are knitted in about the same way as other varieties. The algorithm is simple:

Do not pull the string too tight, otherwise dry nettle shoots may break.

Comment! You can give a broom a crispness with the help of several branches of black currant or birch.

A fresh nettle broom can be used as early as the second day after harvesting, however, when harvesting for the winter, the raw material should be well dried.2-3 days after harvesting, the lower parts of the shoots are cleaned of leaves, then laid out on newspapers, fabrics or a clean floor so that direct sunlight does not fall on the material. 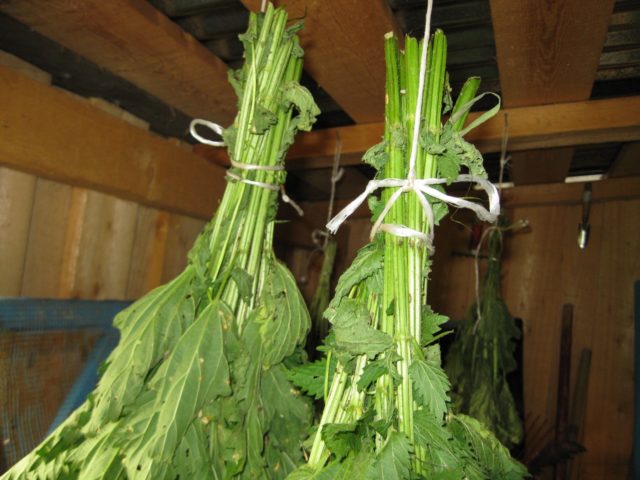 Dried nettles most often under the roof or ceiling, in the driest part of the house

The drying room should be dry and ventilated, only in this case the nettle will not start to rot or mold. Prepared nettle shoots are laid out in 1 layer and left for 2-3 days.

After a while, the stems are tied up on a dense thread or twine and hung under the ceiling of the room until they dry completely.

How to steam with a nettle broom

Steaming with fresh nettles in the bath is very healthy. However, you can get the maximum therapeutic effect only by observing the rules for steaming the broom. This process is different from traditional methods. A nettle broom should not be left in a container with boiling water, as in this case it will lose almost all of its beneficial properties.

The process of steaming nettle requires the preparation of two containers: with cold and hot water. Moreover, the temperature of the latter should be at least 75 ° C.

First, a nettle broom is placed in hot water for 1.5-2 minutes, then in cold water for the same period of time. The steaming procedure is repeated at least 3 times, after which the nettle broom can be used for its immediate purpose.

This method is suitable for those who will use this sauna "tool" as a skin care product or for a gentle vaping regime. People with rheumatic pains should steam the broom differently:

If we are talking about fresh raw materials, then it is enough to put it in hot water for 2 minutes, then pour over it with cold water, and use it in the washing process.

Comment! The water remaining after steaming can be used to rinse your hair. 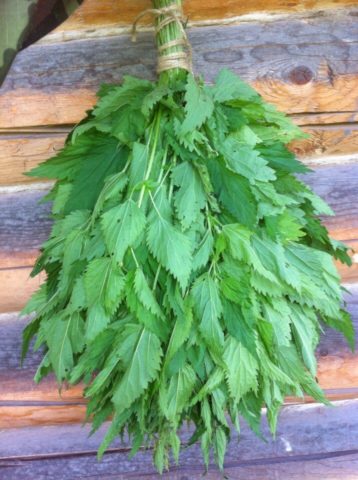 A nettle broom is not used for whipping

The use of this bath "tool" is more like a massage. They start from the cervical spine, then with light touches go down the back to the calves and ankles. The skin should turn red. This procedure is characterized by a slight burning sensation, tingling sensation and warmth.

For rheumatism, nettle broom is used together with oak and birch. The first one helps to warm up and open the pores, while the second has a direct healing effect. Steamed nettle leaves are often applied to the face or acne-affected areas. The procedure time is 2-3 minutes, the number of repetitions is 3 times.

Brooms are stored in a dry room, where direct sunlight does not fall. Most often they are simply hung from the ceiling or on the walls. Do not store the material near sources of fire or near heating devices. 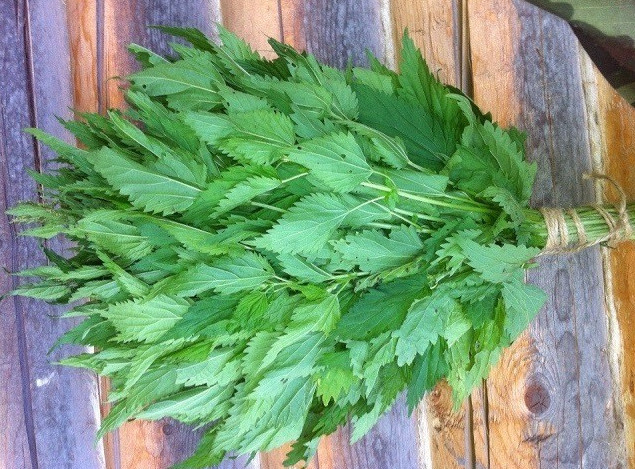 The broom can be stored for no more than 2 years.

Despite the large list of beneficial effects, it is impossible to steam with a nettle broom for diseases such as thrombophlebitis, varicose veins, atherosclerosis and hypertension. Nettle has a powerful blood-clotting effect, and therefore requires careful use even among completely healthy people.

Also, a nettle broom is not recommended for use during pregnancy, the presence of abscesses, tumors, high fever and heart or kidney disease.

How to make a do-it-yourself nettle loofah

A good alternative to a nettle broom for a bath can be a washcloth made from this plant. Raw materials for it are collected at the end of the long rains in September. After such intensive saturation with moisture, the nettle peel is easily separated, then it is dried and rolled into a comfortable washcloth.

Only juicy, well-moistened grass is taken on a loofah

A nettle broom for a bath is a wonderful remedy for cleansing the body and treating many ailments, familiar to our ancestors.The use of unprepared material will not only not bring the desired effect, but will also deliver a lot of painful sensations.

Recommended entries
Hemp nettle (hemp): photo and description, application
Masks, infusions, decoctions of nettle for hair: recipes, rinsing, reviews
Nettle for joints: benefits and harms, recipes, rules for use
The effect of nettle on the blood: on viscosity, composition, cleansing
Nettle for anemia: benefits and harms, recipes, tips and rules for use
Nettle: medicinal properties and contraindications for women, recipes for decoctions, infusions, reviews
Dried nettles: useful properties, rules and methods of drying
Is it possible for pregnant nettles: in the early, late stages, in the second trimester
Nettle decoction and mask for the face: useful properties, application, reviews
Give feedback Cancel reply
Recommended entries
How to permanently get rid of nettles on the site
Nettle soup: recipes with potatoes, with meat