Japanese quince (Chaenomeles japonica) is a compact, flowering shrub. It not only decorates the garden, but also produces healthy fruits rich in vitamins. Careful selection of a planting site, regular watering and correct pruning of quince in the fall affect the size of the yield and the speed of plant development. 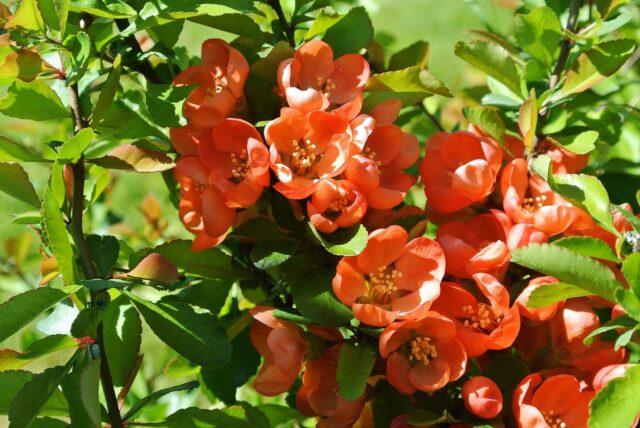 Another name for the shrub is chaenomeles

Is it possible to cut Japanese quince

Like most fruit trees and berry bushes, Japanese quince needs regular pruning. The procedure helps to create a beautiful crown shape, increase the access of light to each branch, and protect the plant from the spread of diseases and pests. It can be divided into several types according to the purpose of its holding:

Pruning and shaping the crown of Japanese quince is painless for her, if the basic rules and timing of their implementation are observed.

When to prune Japanese quince

Starting pruning quince, they are guided by its age and season. Spring is a favorable period for the procedure. It is important not to miss the moment and start cutting before the start of sap flow. In central Russia, it falls in late March - early April. It was during this period that the bush quince is cut, removing not only weakened, but also horizontally located branches.

Important! After the budding begins, the haircut is postponed until the fall.

Summer pruning is less popular with gardeners and is used to improve fruiting.

In winter, it is not worth pruning the Japanese quince shrub, because in frosts even the most resistant varieties have fragile branches, wounds heal for a long time, and the plant is sick.

In the fall, they pinch heavily overgrown shoots, get rid of old branches that do not bear fruit, cut out vertical ones that interfere with the correct formation of the crown. 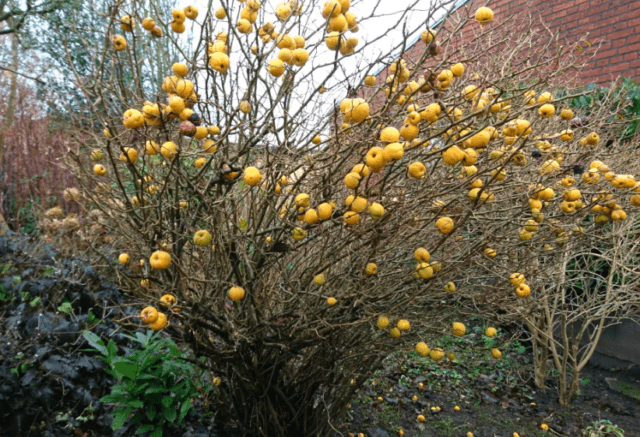 Without pruning in the fall or spring, the shrub can grow too tall and uncomfortable to harvest.

When to prune quince - in spring or fall

The most optimal time for pruning quince is spring. After the procedure at the end of March, the plants quickly recover and begin growing. In the fall, haircuts are carried out only as a last resort. Late removal of branches may result in complete freezing of the bush if the winters in the growing region are frosty and with little snow. To avoid the death of plants, it is worth remembering that during autumn pruning of quince, the crown should not be shortened by more than a third of the height.

Making minimal damage to the shrub is the main task during the pruning period. Most often, the activities for the formation of the crown, the removal of old branches and the rejuvenation of the entire plant are combined in time. For this, several schemes are used.

It is necessary to prune quince in order to rejuvenate after reaching the age of ten. It can help speed up stunted growth and solve the problem of poor fruiting. Pruning is performed in spring or autumn according to the scheme: 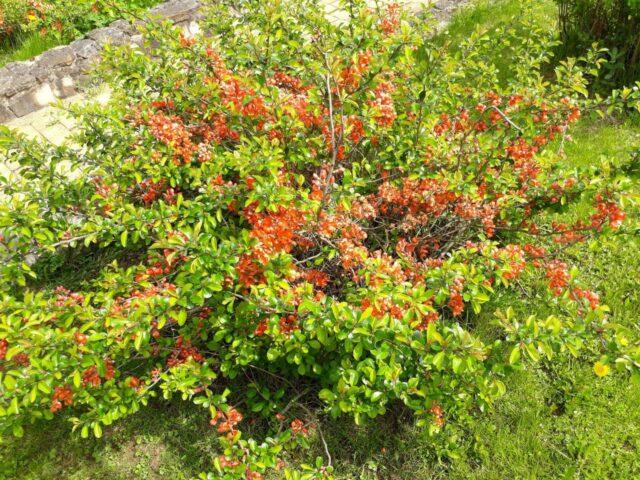 After pruning, no more than fifteen branches are left in the correct crown.

The scheme is applied in the fall and aims to give the crown a bowl shape, in which the plant will receive maximum sunlight. This is especially true in regions with harsh winters.

Trimming is carried out according to the scheme:

In the first year of fruiting

During this period, pruning and crown formation is minimal. In order not to lose the harvest, already in the first year of the appearance of fruits, they adhere to a simple scheme:

If the quince is grown in the form of a tree, the pruning scheme is significantly different. They operate according to plan:

Important! If the quince tree was cut in the fall, and the growth did not increase in the spring, it is worth rejuvenating the plant.

The branches are shortened to a bud, which faces outward from the crown

What tools and materials will be required

A special tool is required for pruning quince. It must be clean, well-sharpened and disinfected.

The pruner is necessary for cutting branches with a diameter of up to 2.5 cm. The working part has two interlocking metal blades made of steel with an anti-corrosion coating. By the type of action, they can be contact (with a movable upper part) and planar (work like scissors). Handles can be plastic, rubber or metal.

The pruner is a must-have tool for the gardener

With the help of them, you can make even cuts on thin shoots. The structure of the tool resembles metal scissors, but with longer blades. They are distinguished by lightness, ergonomics, the ability to make a soft cut due to the presence of a spring.

Saw blade with a serrated carbon steel blade with a rounded shape. With its help, you can remove quince bitches of any thickness by making an even cut. The weight of the tool is small. Not suitable for removing small branches.

Looks like scissors with long handles (30 cm to 90 cm) to create good leverage. Ideal for straightening branches if they are covered with thorns like quince. The largest type of garden tool. It is easy and convenient for them to work. 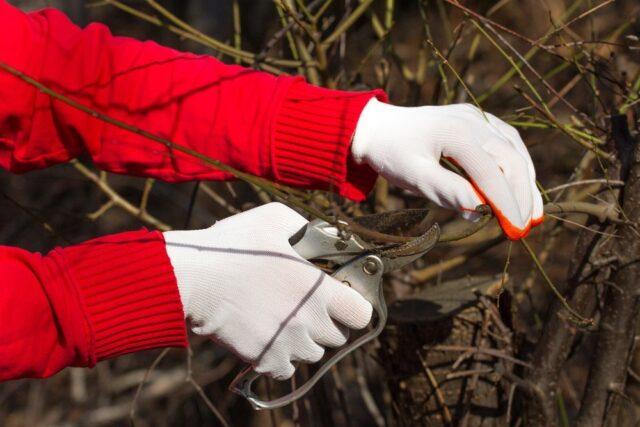 Garden pitch is applied to the trimming site with a thickness of 1.5-2 cm

A viscous substance, insoluble in water, consisting of rosin, wax and interior fat. They are treated with sections to protect the wounds that have appeared from damage by fungi, bacteria and from the leakage of juice.

To make the process of pruning quince (photo) in the garden only enjoyable, use gloves.For thorny bushes, it is better to choose thick, rubberized, reliably protecting hands.

How to properly prune and shape a Japanese quince bush

The quince crown grows quickly, so it needs periodic pruning. In the fall, remove old and dry shoots that interfere with the growth of new ones. At the same time, they adhere to the rules:

How to properly prune a Japanese quince bush in the fall

In order to correctly form a quince bush in Japanese autumn, it is necessary to act strictly according to the algorithm:

If you cut the Japanese quince too much in the fall, this can provoke excessive shoot formation and the waste of the plant's energy on the formation of green mass, and not on the fruits.

Video for beginners - pruning quince in the fall:

How to prune quince in spring

In the spring, it is necessary to comply with the terms and order of the haircut. It is equally important to take care of the further care of the plant. The work is performed according to the plan:

Further care consists in abundant watering so that the plant receives a good charge of moisture for the entire season. Moisturizing is repeated at the time of ovary formation and fruit growth.

Summer pruning of Japanese quince is less popular, but can be done under certain conditions. It was found that with lengthening of annual growths, the buds located in the lower part of the shoots germinate worse, as a result, this place is significantly bare. Summer pruning allows you to get rid of this defect and create a new tier.

Quince flowers appear on the shoots of the current year, therefore, the more increments, the higher the yield of the shrub. Branching after pruning increases their number. To make it maximum, shoots that have reached 40 cm are shortened by a quarter.

It is permissible to carry out decorative pruning of quince in the summer. This is done to give the shrub a special shape to fit into the design of the site. Subject to all the rules, the plant tolerates a haircut as easily as in spring and autumn. 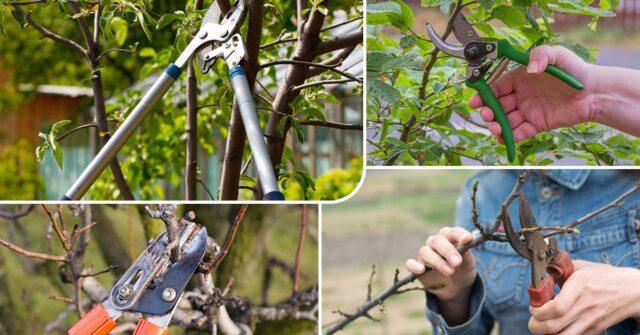 Pruning in the fall is carried out after the shrub has completely lost its foliage.

Knowing the rules for caring for berry bushes, pruning quince in autumn, spring or summer is not difficult for a gardener. Without it, it is impossible to achieve a high yield and excellent quality of fruits. Correct crown formation, timely watering and feeding allow you to grow quince in one place for up to forty years.