How to treat currants in the spring from pests

In early spring, the gardener's work begins with inspecting trees and shrubs. Pest larvae and spores of various infections perfectly withstand even the most severe frosts, so they can be easily found on currant bushes. Do not wait until the snow has completely melted or the ground thaws - you need to act as early as possible! Experienced gardeners have their own list of the most effective means and methods of processing: from watering the shoots with boiling water, to folk remedies and strong chemicals. In any case, you need to understand that preventive measures are most effective, and you need to start acting in early spring. 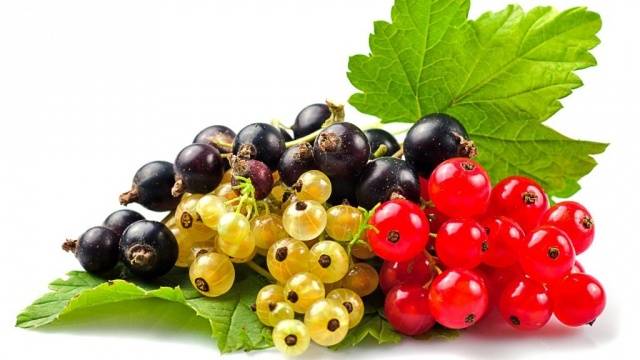 Everything about how to combine care and fight against currant diseases will be described in this article. Here you can find information about when and how to spray currants in the spring, from what diseases and pests you need to save bushes of black and red berries.

The importance of care

Berries of black and red currants are very tasty and healthy. Unfortunately, it is quite difficult to grow these crops: the bushes do not take root well after planting, and subsequently become a bait for various insects and infections. If you do not organize competent care for currants, you can not expect a harvest from it. 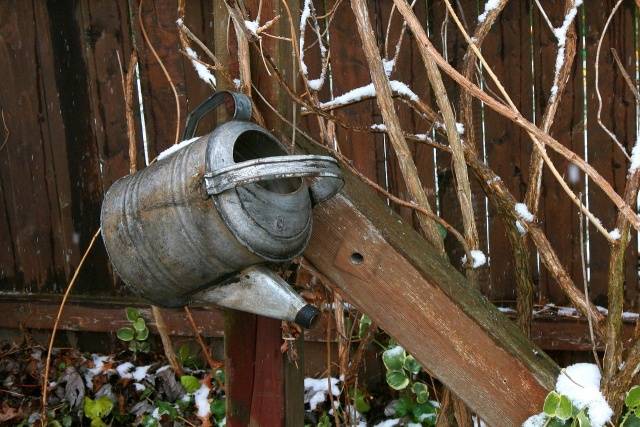 Spring treatment for pests may not be necessary if the currant bushes are properly looked after. Care for this shrub is necessary almost all year round, and activities have to start in early spring:

Attention! An important role in the effective fight against diseases and pests is played by correctly selected varieties of currants. For planting, you need to choose those types of shrubs that initially have good immunity and are suitable for a specific climate.

Protection of currants from diseases and pests

As practice shows, even the most careful care is sometimes not enough - currant bushes begin to hurt or are affected by pests.In this case the most important thing is to identify the cause of plant damage and select an effective drug for a specific situation. 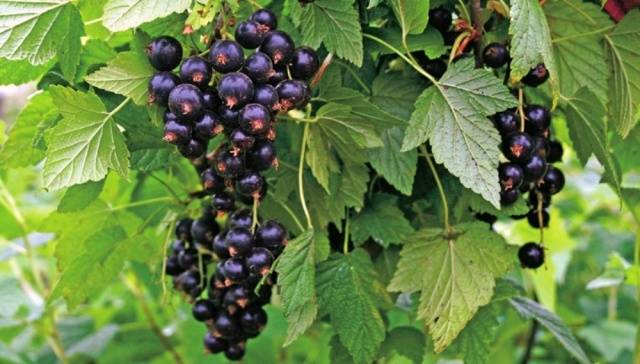 The most popular and dangerous diseases and pests affecting black and red currants in the middle lane will be listed below.

Important! Protection of currants from diseases and pests should begin in early spring with an inspection of the bushes. It is also important to take into account the infections and problems that plagued the currant bush last season (often disease spores and insect larvae hibernate on the bush and wake up with it in the spring).

One of the most dangerous pests of currants is the kidney mite. It is easy to find out about the presence of this insect - the buds on the shoots will be unnaturally large and strongly swollen. When April comes, the buds will not open, but will begin to loosen.

Attention! Each bud of a currant can contain more than a thousand pests. 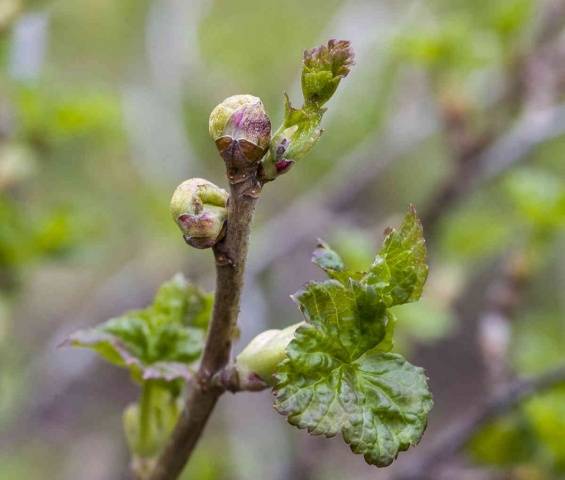 A bud mite can greatly reduce yields and even completely destroy a currant bush, therefore, methods of dealing with this pest must be radical:

If the moment is missed, the mite will destroy the buds, and the currants will no longer produce a crop in the current season.

Aphids on currant bushes can be recognized even when the leaves bloom - at the tops of the shoots, the leaves become wrinkled and curled. Spring spraying of currant bushes with boiling water is very effective as aphid prevention, because this pest hibernates right on the shoots (more on the method will be discussed below). 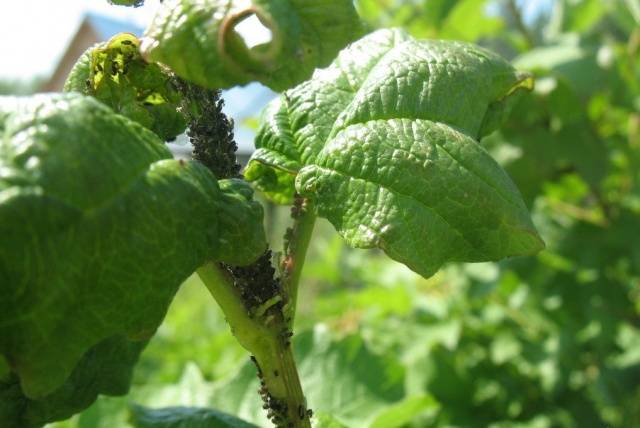 When the bush is already affected by aphids, only special chemicals for processing currants can help. Gardeners talk about the effectiveness of this composition:

The resulting solution should be abundantly sprayed with currant bushes and lightly water the ground near the plant.

The larvae of the currant goldfish eat the tender tops of young shoots, which can cause the branch to dry out completely. Due to the effect of this pest, currant berries become smaller, and the overall yield of the shrub suffers. 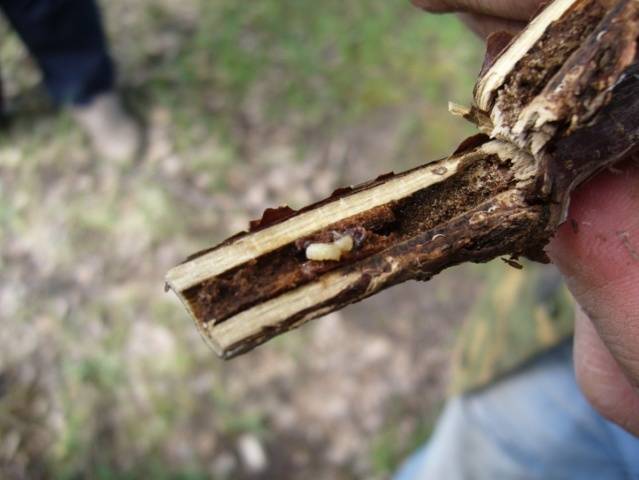 Fight with the goldfish and its larvae should be radically - completely cut off the damaged shoots and immediately burn them.

This pest is dangerous in that it damages most of the green mass of the shrub in a short period of time - it eats the leaves. As a result, currant vegetation suffers, photosynthesis is disturbed in the plant.

Important! You can notice the presence of a spider mite in early May. Currant leaves are covered with spots of a whitish or reddish-brown hue. From the seamy side of the leaf, you can see the tick itself. 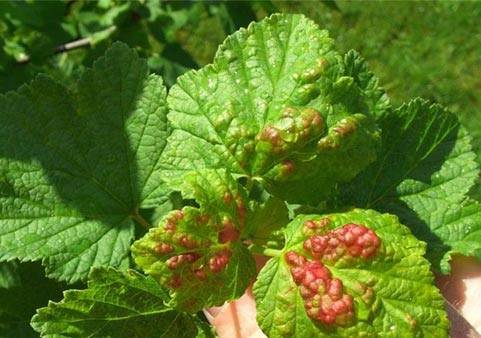 You need to fight the spider mite by tearing off all damaged leaves and burning them. Additionally, currants should be treated with a 50% solution of karbofos. Such processing can be carried out both in spring and in summer.

It is not so easy to detect this pest, since it is hiding, and its form of habitat is considered hidden. Usually, gardeners understand that the currant is affected by the sawfly only when the ovaries form and the berries ripen - the larvae of this insect are inside the fruit.

At a certain moment, the larvae begin to get out, damaging the fruits, which leads to the fall of the berries. Together with the berries of the currant, the pupae of the sawfly fall into the ground, where they live until the next season.

So that next year the currant does not suffer from the sawfly again, in late autumn or early spring, it is necessary to dig up the soil in the near-trunk circle. The shrub itself can be sprayed with a 0.2% chlorophos solution.

Scale eggs are found on currant shoots, and they are painted in a red-purple hue. However, it is difficult to notice the clutches of this pest, since it hides them under the shields of dead adults. During the flowering period, larvae hatch from the eggs of the scale insect. 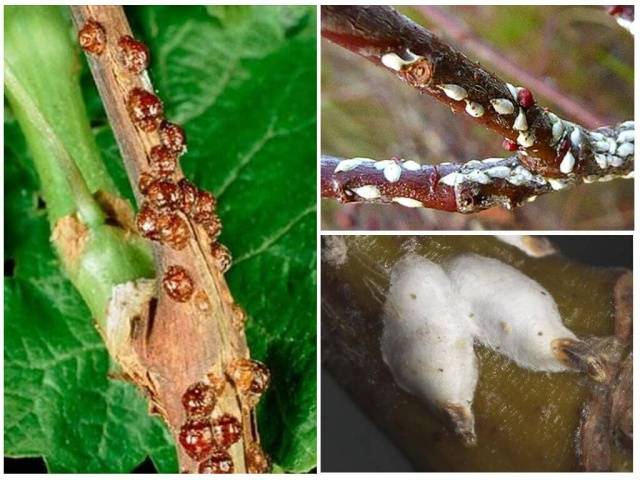 Insects feed on juice from currant shoots, which can lead to complete drying out of the bush. Effective cleaning of currant branches with a metal brush.

Advice! If there are a lot of willow scabbard eggs on the shoots, it is better to cut them out and burn them.

Disease prevention sometimes does not help, and the plants get sick anyway. One of the most common diseases of black and red currants is terry. Terry is dangerous in that it is difficult to identify it in the early stages, and then it's too late - the shrub completely ceases to bear fruit. 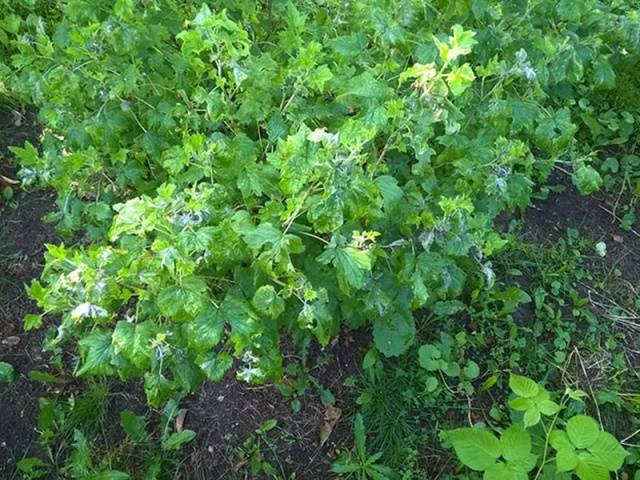 Twisted, deformed leaves on currants indicate the presence of terry. Such leaves must be torn off and burned as soon as possible. It is better to remove infected shoots completely.

It is necessary to treat powdery mildew in a timely manner, since the disease often causes the death of entire orchards. At the stage of ovary formation, when the shrub has completely bloomed, you can additionally spray the bushes with a solution of benlate or karatal (20%). 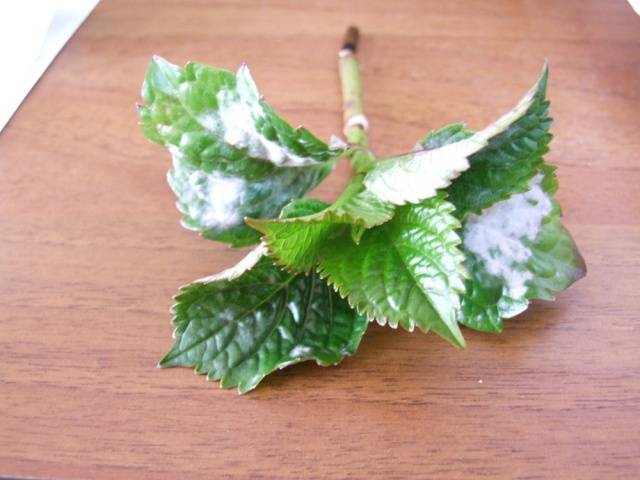 Attention! In the case of extensive damage to currants with powdery mildew, the chemical treatment must be repeated after a week.

This is a fungal infection that poses a danger to currant leaves. The greatest risk of this infection affecting shrubs occurs in the middle of summer. However, preventive treatment of plants should begin at the beginning of spring. 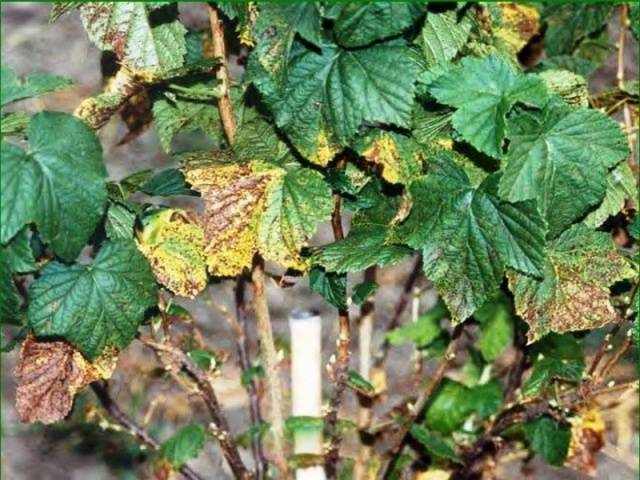 To combat anthracnose, before flowering, the shoots are treated with a solution of colloidal sulfur, the procedure is repeated after a couple of weeks.

Important! Diseases of red currants are the same as those of black currants - the processing of these plants is carried out in the same way.

Proper care may not be enough, and it is extremely difficult to deal with an already spreading infection or breeding pests. As described above, the lesion can be completely eliminated only by radical methods - cutting off shoots, picking off leaves and fruits. In order not to start the situation, it is necessary to use preventive measures.

Folk remedies rarely act on the active stage of the disease, but they are often effective as a prophylaxis. One of the most effective and safe methods is considered raspberry processing and currants with boiling water. 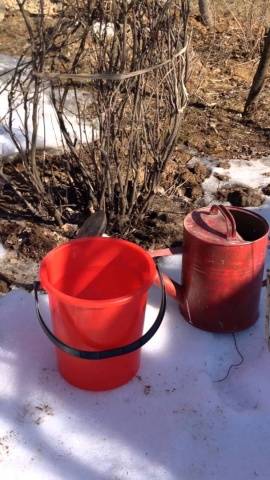 how process currants in the spring from pests with boiling water, so as not to harm the plant? In fact, there is nothing difficult here: the most important thing is not to waste time. At the time of processing, the currant buds should be in a dormant state, so it is better to do this at the very beginning of spring. 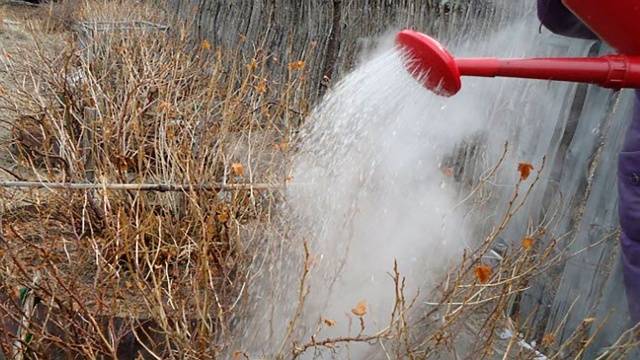 The whole process consists of a few simple steps:

Attention! Boiling water is not a panacea. This remedy has proven to be effective only against insects, whose eggs and larvae overwinter on the shoots of shrubs (for example, currant aphids).

You should not wait for the first signs of disease or damage to currants by pests, in the spring you can carry out preventive treatment of the bush with special chemicals. Many of these drugs do not harm the plant and crop, provided they are used correctly and in a timely manner. 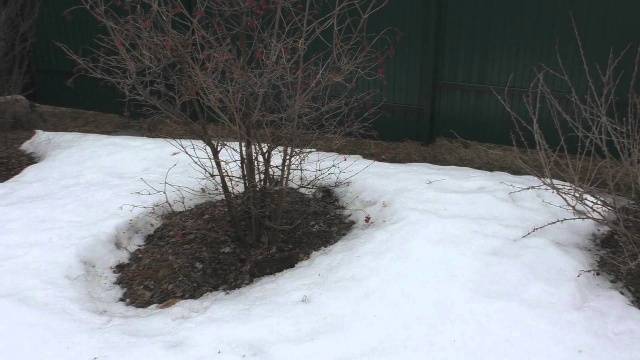 The most popular among gardeners and summer residents are the following drugs for prevention.

This tool not only fights against diseases, fungi and pests, carbamide (the second name of urea) contains a large percentage of nitrogen and is a natural fertilizer. 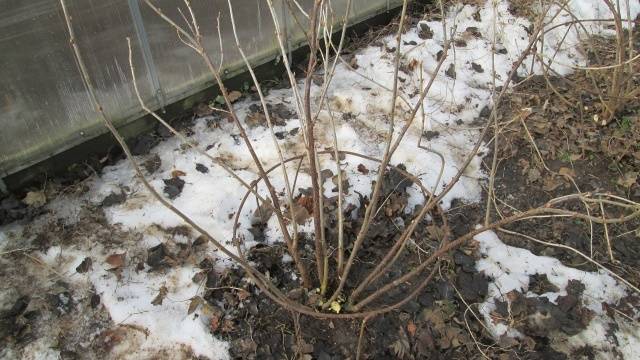 It is necessary to spray the currants with urea in early spring, before the beginning of the growing season. The buds on the bushes still have to sleep, as urea can burn young leaves. At the time of treatment, the air temperature must necessarily rise to + 5- + 6 degrees, otherwise the product will not be effective.

To prepare a solution in 10 liters of water, you need to dissolve from 500 to 700 grams of urea (depending on the degree of damage to currants last season). 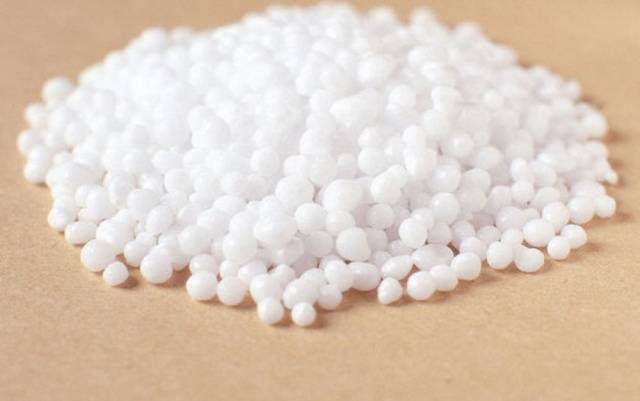 Important! Urea treatment slows down the growing season, so the shrub will begin to bloom 1.5-2 weeks later.

It is allowed to process shrubs with a solution of copper sulfate both in autumn and spring. This must be done at a time when the plant is "sleeping". Autumn processing falls on November, in the spring it is necessary to act as soon as the temperature settles at positive marks. 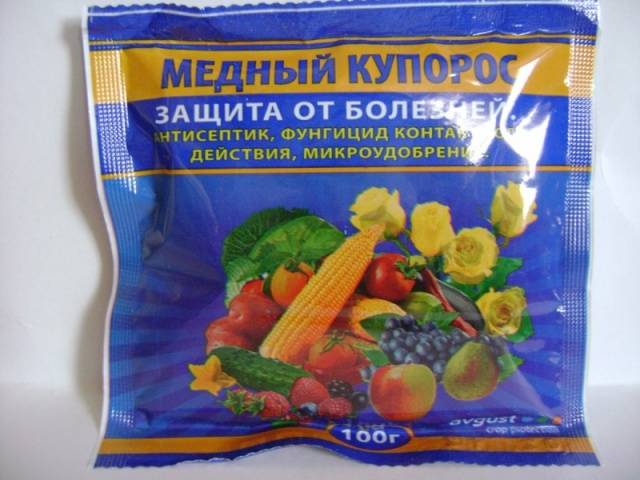 The solution is prepared from 10 liters of water and 50-100 grams of copper sulfate. About 1.5 liters of the finished product are spent on the currant bush.

Advice! Bordeaux liquid is prepared on the basis of copper sulfate, its use has an even better effect.

The malathion-based product has an insecticidal and acaricidal effect and is suitable for spring treatment of currant bushes. A feature of the drug is a quick action (insects die almost instantly), but it should be borne in mind that karbofos kills only those individuals on whose bodies it is sprayed (hidden pests will remain alive). 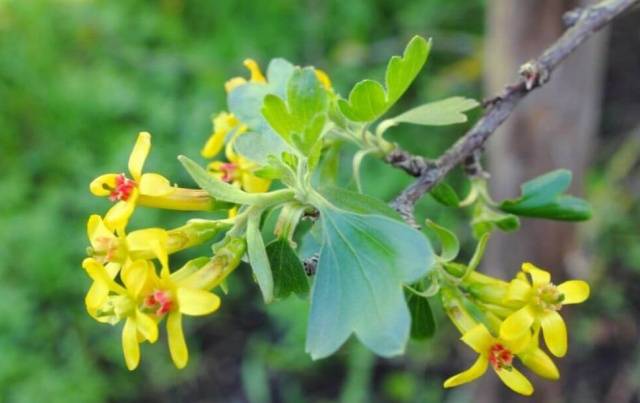 If the currants did not hurt last season, one treatment with karbofos will be enough. Otherwise, spraying will have to be repeated several times at intervals of 7-10 days.

Currants must be processed, because not only people are interested in this delicious berry - it attracts many insects and is often sick. As practice shows, it is much easier to cope with problems at the initial stage and prevent them than to deal with the consequences.

More information about the prevention of pests and diseases of currants is described in this video: