Japanese henomeles (quince): how it grows, blooms, why it does not bear fruit

Japanese quince blooms very luxuriantly and beautifully. Sometimes buds do not form - there are different reasons for this problem and options for solving it. The fruits of the perennial are edible, but the shrub may not bear them. Often the reason is the same as in the absence of flowering.

How the Japanese quince tree grows and blooms

Japanese quince can grow up to 3 m. The crown diameter of some varieties exceeds the height. The shrub grows slowly. In a year, the height increases by 5 cm, the width - by the same amount. Chaenomeles finally grows by 5-10 years. He lives for decades, with good care, up to 60-80 years.

Comment! Japanese quince grows only in sunny areas. Moisture, looseness and fertility of the soil are important.

Chaenomeles blooms profusely. The color of the petals depends on the variety. The classic version is red-pink or orange shades. The flowers can also be pink, creamy pink, white. They reach 3.5 cm in diameter. Depending on the variety of Japanese quince, the flowers can be simple, double. 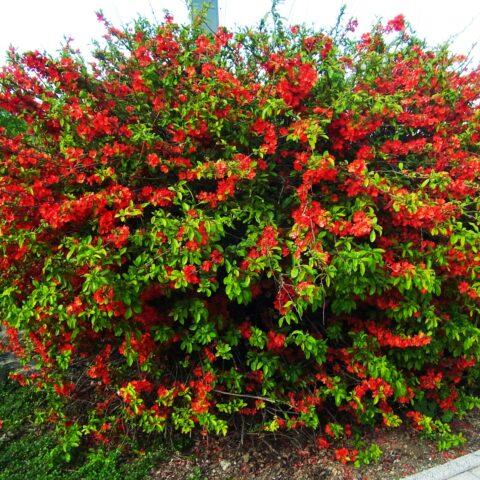 An interesting feature of the flowering of chaenomeles - it begins even before the leaves are completely blooming.

When and for what year quince blooms

The flowering of Japanese quince bushes begins in spring. The buds usually bloom in late April or early May.

How many Japanese quince blooms

The flowering of Japanese quince lasts 3-4 weeks. The specific dates depend on the perennial variety. The duration of flowering is the longer, the smaller the number of buds on one branch and pollen. The opposite is true as well. This rule applies to most plants.

Why Japanese quince does not bloom

Planting Japanese quince, gardeners expect annual and lush flowering from it. His absence becomes a big disappointment. There are many possible reasons for this problem.

Chaenomeles' lack of flowering may be due to the wrong planting site. The shrub loves the sun, it not only does not need shading, but can also do harm. Poor lighting is fraught with a slowdown in growth and development, a reduction in the number of buds, and a complete lack of flowering.

Another important aspect is soil. Japanese quince prefers sod-podzolic, loamy or sandy loam soil. The shrub requires an abundance of humus, the optimum acidity is 6-6.5 pH. If the soil is peaty or alkaline, this will have a bad effect on the development of the plant, its flowering. The risk of certain diseases increases.

Chaenomeles is a cross-pollinated plant, therefore it needs neighbors of other varieties. Their absence has a bad effect not only on fruiting, but also on pollination. It is optimal to plant perennials in small groups of 3-4 bushes.

The reason for the absence or deterioration of flowering of Japanese quince may lie in improper care of it. One of the mistakes is waterlogging of the bush. Frequent or excessively abundant watering can provoke rotting of the root system. This will badly affect the entire plant, including its flowering. 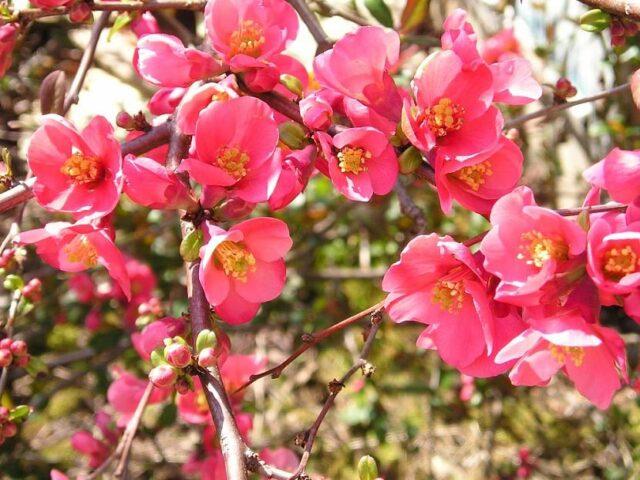 Another possible mistake when caring for quince is the abuse of nitrogen fertilizers. Top dressing is carried out in the spring. If you choose the wrong dosage, all the forces of the plant will go to the formation of green mass, flowering will suffer.

Comment! When planting chaenomeles, it is important to apply a complex of fertilizers.In this case, feeding will not be needed for two years.

The flowering of Japanese quince is badly reflected by the lack of weeding and thickening of the plantings. The abundance of weeds and other crops nearby can inhibit the growth and development of the shrub. If there are tall trees nearby, they are able to shade the quince, and sunlight is important for it.

Another mistake when leaving is the refusal to loosen. This measure is very important for correct gas exchange. Without it, the roots will not receive enough oxygen, which will have a bad effect on the entire plant. If the soil has a heavy texture, a hard crust forms on the surface. Because of this, moisture begins to evaporate quickly, the plant experiences its deficiency.

Chanomeles flowering problems can occur with improper pruning. The maximum buds are formed on the shoots for 3-4 years. You need to leave branches of different ages, cut off old specimens from the age of five. It is imperative to get rid of sick, dry, damaged branches. If you ignore pruning, flowering will decline. Gradually, the buds will stop forming altogether.

The reason for the poor flowering of Japanese quince or its absence may lie in the excessive deepening of the root collar during planting. Because of this, the bark gradually decays, signs of depletion of the bush appear, but top dressing does not help. In addition to inhibition of growth, the problem can be identified by the small and pale foliage, its early shedding. Deepening of the root collar can occur not only during planting, but also for other reasons: 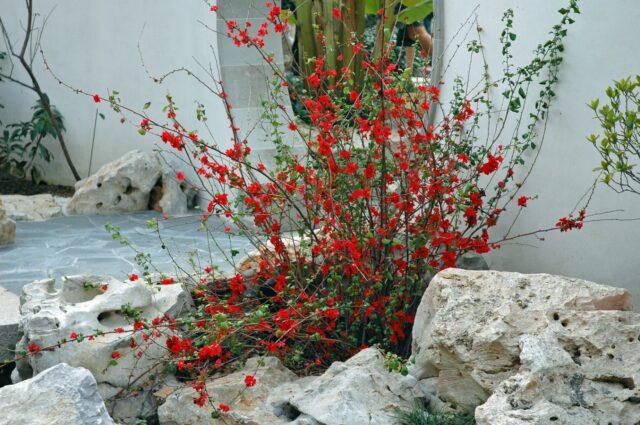 In chaenomeles and other bushes, it is imperative to form a near-trunk circle, it must be free of lawn, stones and other elements

What to do if the quince does not bloom

In most cases, the problem of the lack of flowering in chaenomeles can be solved. You should start by finding out the cause of the trouble. To make the quince tree bloom like in the photo, you can take the following measures:

Comment! Transplanting Japanese quince is an extreme measure. Due to the taproot that goes deep into the ground, there is a high risk of damage to it, which can lead to the death of the bush. 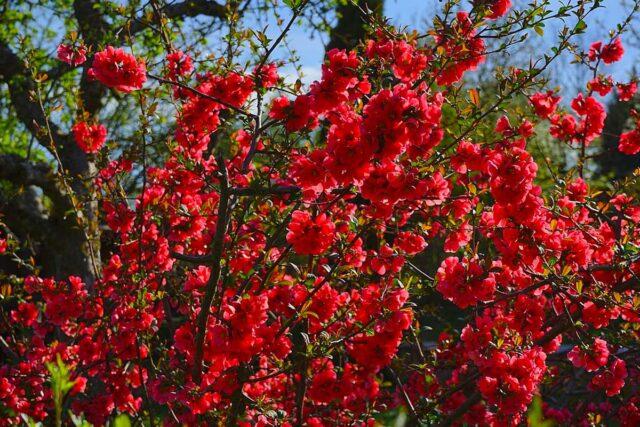 Chaenomeles should be mulched - this way moisture is retained, the soil remains loose for longer

Why quince blooms, but does not bear fruit

Fruiting of chaenomeles usually begins 1-2 years later than flowering. The timing depends on the origin of the shrub. When planted with seeds, the perennial begins to bear fruit by 4-5 years. In the case of grafting with a cuttings, the process starts already at the age of 2-3 years.

If the Japanese quince blooms, but does not bear fruit, the reason may lie in the absence of neighbors for cross-pollination. This rule applies to most varieties. The problem is solved by planting 2-3 bushes. The fruits will appear in 2-3 years.

An important point for chaenomeles is pruning. During it, it must be borne in mind that predominantly shoots bear fruit at the age of 3-4 years. They should make up most of the branches after pruning. Shoots of other ages are also important, only extra specimens and older than 5-6 years should be removed.

Comment! The fruiting of Japanese quince is affected by both incorrect pruning and its complete absence.The thickening of the bush has a bad effect on its condition and development.

Chaenomeles is usually planted because of its high decorative effect due to flowering. Over the years of cultivation of the shrub, many varieties have appeared, including hybrid ones. Some of them are sterile, that is, they do not bear fruit. This point must be clarified during the purchase, so as not to be disappointed later.

Quince often lacks fruiting due to improper care. This applies not only to pruning, but also to watering, fertilizing, loosening, weeding.

The reason for the lack of fruiting may be the wrong planting site. Little light, north wind, heavy or poor soil - all this has a detrimental effect on the shrub.

Chaenomeles is native to warm countries, so it can suffer from frost. Buds are leafy and fruiting, differentiation occurs in October-November and March-May. Outwardly, they are the same. Kidney development begins in the fall. They are very delicate and easily damaged; frost can destroy them.

Japanese quince blooms and bears fruit usually from 3-4 years of age. Both processes may not start or stop over time for a number of reasons, more often due to an incorrectly chosen landing site, non-compliance with the basic rules of care. In most cases, the situation can be corrected. Recovery sometimes takes several years, but this is normal for a long-lived shrub.