The ostrich fern is often used for landscaping large areas, in landscaping and simply to decorate the space around the house. It feels great outdoors, requiring no special care or special conditions.

Fern Ostrich feather is a perennial herb, reaching up to 1.5-2 m in height and more than 1 m in diameter. The root processes of the ostrich are long, creeping, brown-black in color with scales on the surface.

Fern branches are arranged in a circle from the rhizome. Due to their simultaneous growth, the plant forms an even, beautiful shape. Vayi outwardly resemble ostrich feathers, due to which this type of fern received the corresponding name. 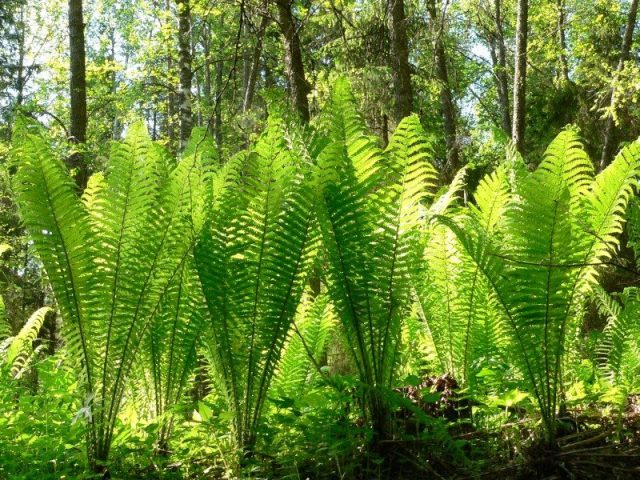 There are two types of branches - sterile and spore-bearing. The former can reach 2 m in height and about 20 cm in width, have a bright green color and a pinnately dissected structure. 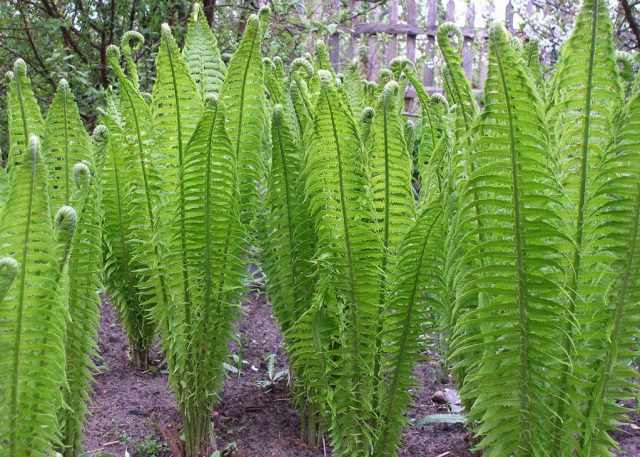 It is they that form the outer high funnel-ring, in the center of which, by the middle of summer, low (about half a meter), dense fronds with a darkish coloration develop, bearing sporangia. These branches have a much smaller number of leaves than infertile ones, but at the same time they can remain on the bush for several years without falling off in winter. 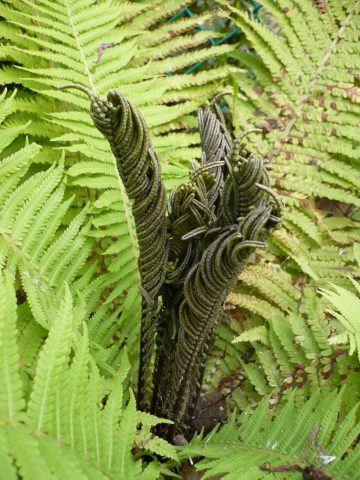 Under natural conditions, the ostrich feather fern can be found in mixed forests with high humidity, as well as in the immediate vicinity of water bodies. It is widespread in the European part of Russia, the Far East, and Ukraine. 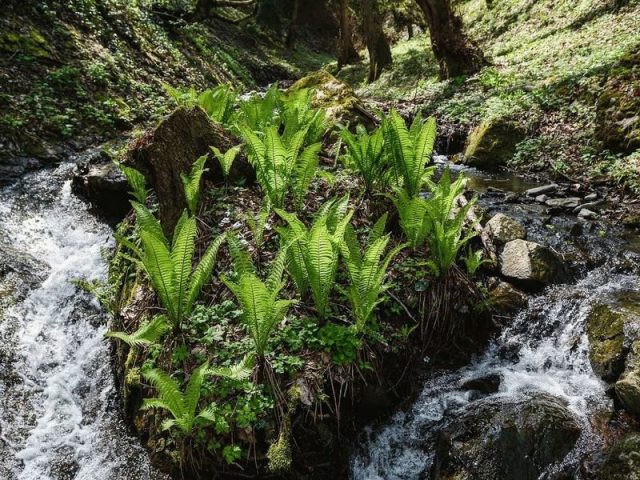 Important! The plant is included in the Red Data Books of some regions of the country (Saratov, Vologda, Bryansk, Samara regions, etc.).

In the biological description of the ostrich fern, it is customary to distinguish 2 main types: ordinary and oriental. Outwardly, both varieties are very similar, but they also have some distinctive features.

Oriental ostrich or Matteuccia orientalis can be found in the Sakhalin region, Korea or China. In structure, it is similar to an ordinary fern - high strong branches of the first order and spore-bearing brown fronds in the center. But the eastern ostrich is not as tall as its relative - on average, no more than 1.3 m, has a smaller number of leaves, while the size of the leaves themselves is somewhat larger.

An important difference between the species is that it tolerates unfavorable environmental conditions worse. The plant needs regular watering and protection from drafts and frost. Spore-bearing fronds die off for the winter. 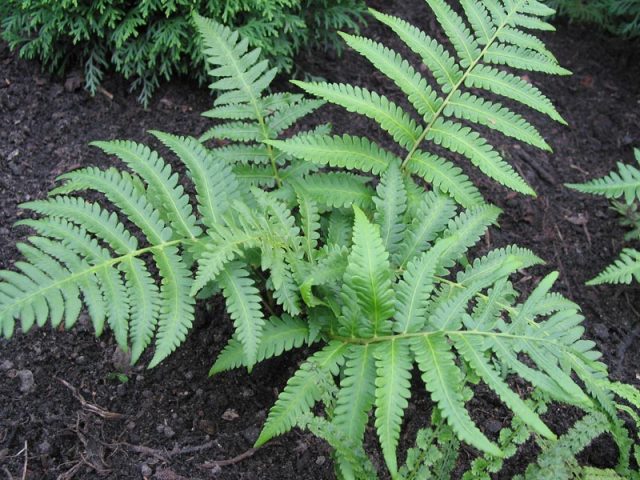 The common ostrich fern is distinguished by its high endurance and unpretentiousness. It develops quickly enough, tolerates frost well and does not require constant care. The only requirement for its growth is sufficient and regular watering.

The area of ​​its distribution is quite extensive, due to the fact that the plant feels great on almost any soil and in various climatic conditions.

The common ostrich has strong, tall fronds of rich green color and a powerful root system.It is this variety that is used to decorate garden plots and landscaping areas. 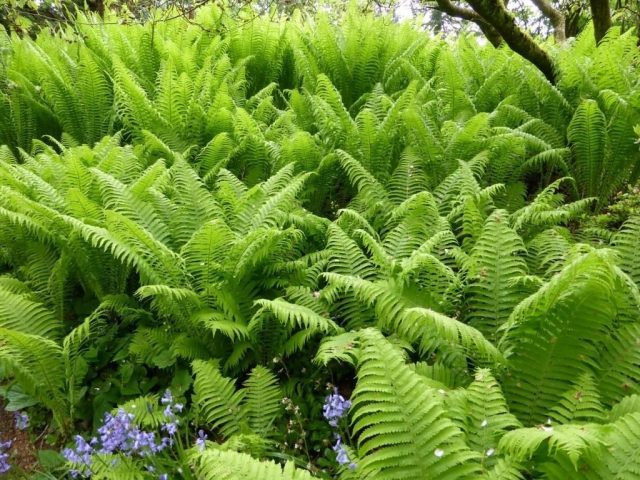 Ferns are among the oldest plants that arose even before the appearance of bees. It is with this that the lack of flowers in this plant is connected - it does not need pollination and seed development.

There are 2 ways to breed a fern: 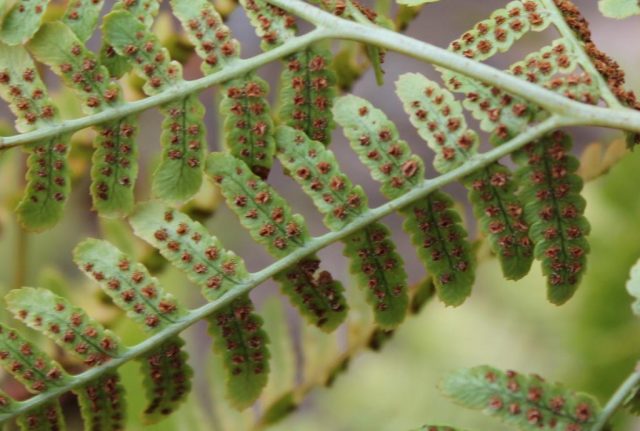 Planting and caring for the ostrich fern

Planting an ostrich fern and the subsequent care of the plant is not difficult. Subject to simple rules, the plant will feel great in almost any area and delight with fluffy green leaves.

Planting shoots with a vegetative reproduction method is carried out either in the first spring months before the leaves appear, or at the end of summer, when sporulation occurs.

If the ostrich fern is propagated from spores, then the matured plants are transferred to open ground in the spring, when the weather is warm.

Both a shaded area and a well-lit area are suitable for growing ferns. It should be borne in mind that with a large amount of sunlight, one should not count on strong growth of shoots (their height in this case will not exceed 1 m) and rich color of leaves. The most juicy color is acquired by the leaves of the ostrich growing in shaded areas with high humidity.

When choosing a site, you need to pay attention to the fact that the root system of the plant grows very quickly and after a year it may be at a distance of several meters from the main bush.

As for the soil, sandy dry soil is not the best option. This soil will have to be watered frequently to create comfortable conditions for plant growth. Otherwise, the fern has no requirements for the composition of the soil. It can fully develop on both fertile and infertile lands, as well as on soils with any acidity. 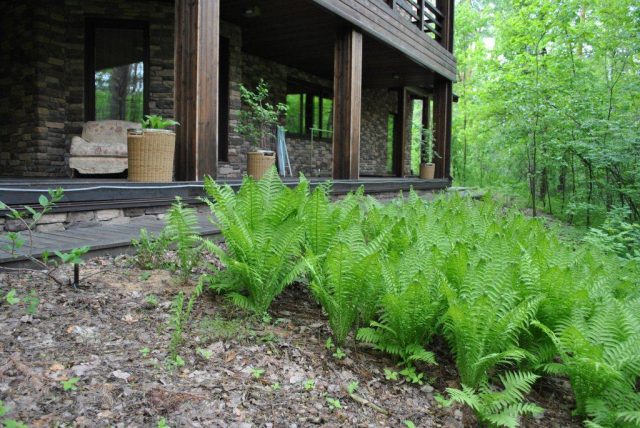 How to plant correctly

The rules for planting an ostrich depend on which method is chosen for breeding. With the vegetative method, a part of the rhizome with a length of 20-30 cm is taken. At the same time, there should be at least 2 buds on the process. It is planted to a depth of about 5 cm at a distance of at least 50 cm from other ferns.

Raising an ostrich from spores is a laborious but more efficient process. Spores are collected in August and planted in a disinfected peat mixture. In this case, the collected spores do not have to be planted immediately, they can be stored for several years. The container with planted spores is covered with a strong transparent lid and left for a while, remembering to regularly air and water.

After a few weeks, when the spores have germinated, the lid can be removed. The grown fern is dived and planted in separate containers. At home, seedlings are grown for at least 2 years and only then are they taken out to the site. 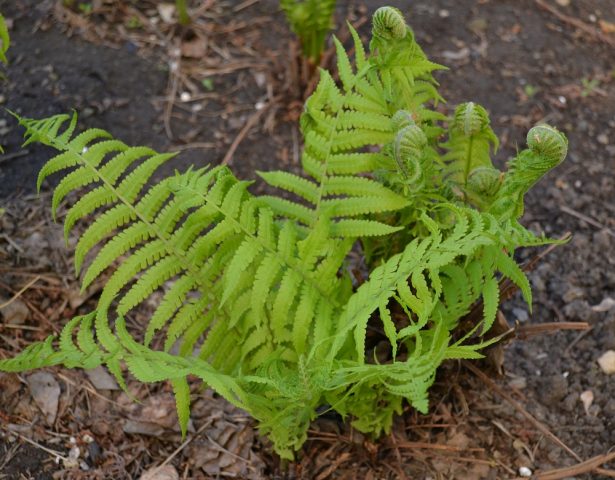 It is better to plant a fern in groups of 5-6 pieces at a distance of at least 40-80 cm from each other. For planting, it is recommended to use a scheme similar to the natural growth conditions of an ostrich, triangles. Such a planting will ensure the subsequent independent vegetative reproduction of the fern.

The ostrich is a plant that does not require significant maintenance. If the site as a whole meets the needs of the plant, then with minimal care it will delight the eye with lush green bushes.

Sufficient moisture is perhaps the only prerequisite for growing ostrich feathers.The plant needs regular, moderate watering. If the soil is very dry or the weather is hot, then the fern must be watered abundantly, as well as spray the aerial part with a rain method.

The ostrich performer does not feel the need for additional fertilization. However, some gardeners report a good response to the occasional use of organic and mineral fertilizers.

Pruning, shelter for the winter

The plant does not need pruning. Instead, once every 3-4 years, the ostrich needs to be thinned out, as it grows rather quickly. To prevent the appearance of fern thickets, it is necessary to remove excess shoots.

Advice! Experienced gardeners recommend taking care of limiting the growth of the ostrich in advance. For this, mechanical barriers are used that enclose the landing site both above and below the ground. 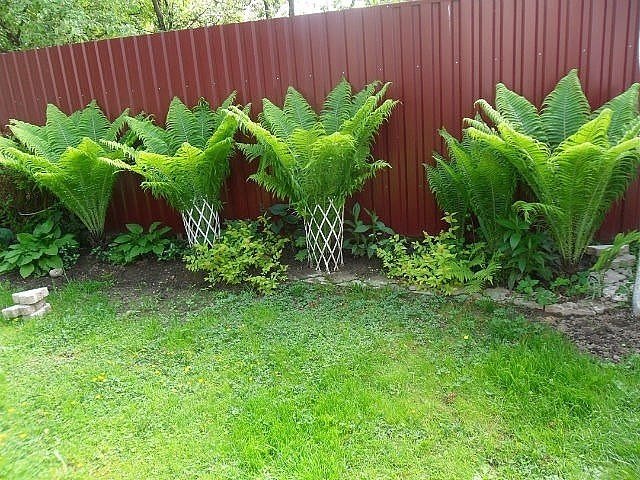 The ostrich feather tolerates low temperatures well, so it usually does not require any preparation for winter. If winter is expected to be very cold, then covering materials can be used.

The main application of the ostrich operator is the use of individual plots or park areas in landscape design. The photo shows that the ostrich feather fern can be an adornment of almost any composition. It can be planted among stones and boulders or on the banks of water bodies. 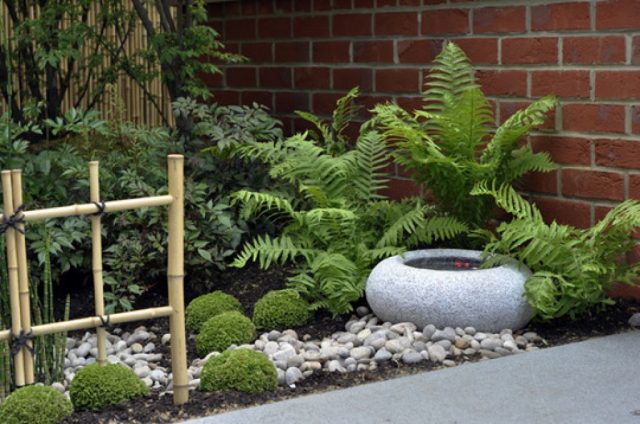 The ostrich coexists well with tall large flowers, like irises or peonies. 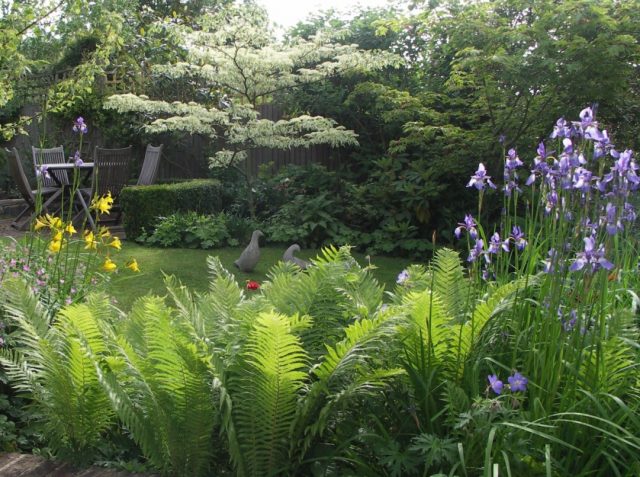 When grown in shady areas, the ostrich can accompany the host or daylilies. 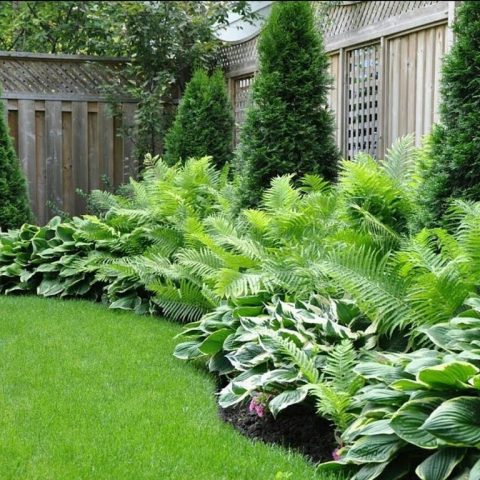 You can often find a fern next to early spring flowers - tulips and daffodils, growing, the ostrich covers already faded plants. 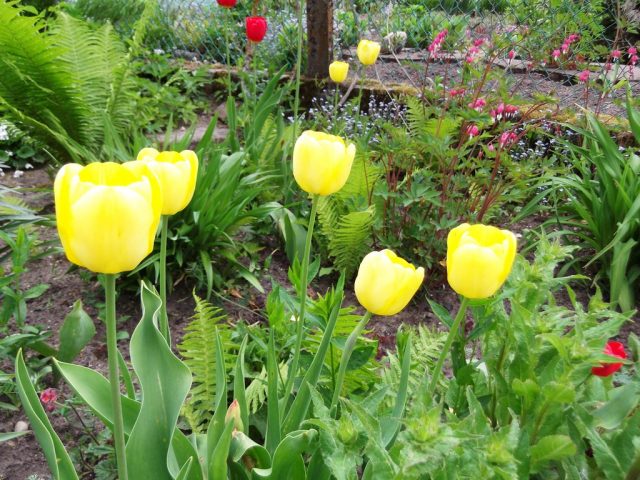 Attention! It is not recommended to plant the ostrich along narrow paths, as it will interfere with the passage as it grows.

As for the undesirable neighborhood, it is not recommended to plant a fern next to light-loving low flowers (zinnias, petunias, marigolds), since the ostrich will block the planting from the sun's rays. It should also be remembered that the plant has a highly developed, rapidly growing rhizome, which can crush weaker neighbors. 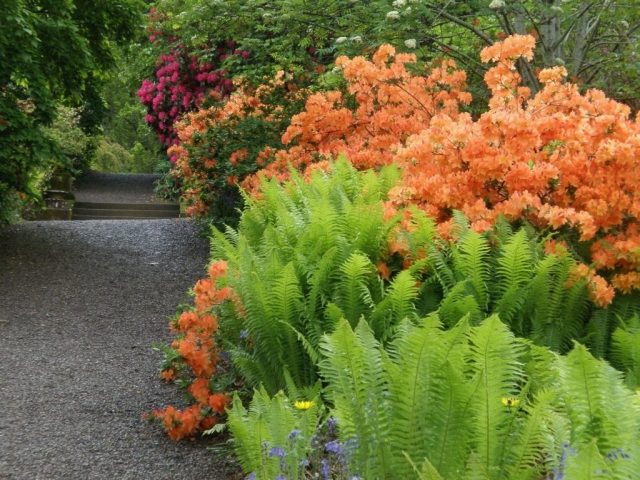 Another undoubted plus of the ostrich fern is its high resistance to various diseases, as well as to the effects of insect pests.

The only danger is the thickening of the plantings in combination with high humidity. Under such conditions, fungal infection is possible. It appears as dark spots on the leaves. If detected, it is necessary to remove and destroy the affected shoots, and spray the remaining plants with a fungicide.

Important! To prevent the appearance of fungus, it is recommended to treat plantings with copper sulfate in the spring.

The ostrich fern is a very beautiful and unpretentious plant that can be a decoration of any site or territory. Growing an ostrich on your own will not be difficult, even a novice gardener can do it. The plant has lush, bright green leaves and goes well with most garden flowers.