Mahonia holly in landscape design: a photo of a hedge

Holly Mahonia is rare in landscape design. The decorative effect of the culture is given by the color of the crown, abundant flowering and bright blue berries. They use Mahonia to decorate the garden, city parks, areas adjacent to the facade of the building.

The use of Magonia in landscape design

Mahonia holly belongs to the Barberry species. The shrub grows slowly, by the age of 6 years, the height varies from 1 to 1.3 m, the indicator depends on the climatic zone. The plant has earned its popularity due to its drought resistance, unpretentiousness to the composition of the soil, shade tolerance. Does not lose its decorative habit in partial shade. If the holly mahonia is located under the dense crown of tall-growing trees, the color of the leaves is paler than in the area open to ultraviolet radiation.

The photo shows Mahonia holly during flowering, the culture is attractive for landscape design throughout the year. The color of the leaves by winter acquires a dark red color, looks aesthetically pleasing against the background of snow, serves as a bright accent in the "sleeping" garden. The plant blooms from early April to May. The culture is completely covered with large inflorescences with bright yellow, small and fragrant flowers. Magonia compares favorably with flowering shrubs for the abundance and duration of flowering. 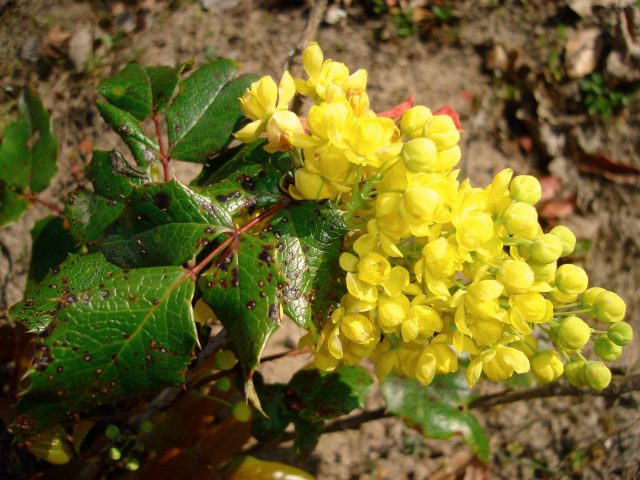 At the end of summer (from August to September), rounded berries ripen, their arrangement on the inflorescence resembles a bunch of grapes. Fruits are about 12 mm in size and are colored blue.

Important! The berries of holly mahonia are used in cooking.

The shrub is used by professional designers and amateur gardeners to decorate the landscape. The culture is universal in application, it is combined with almost all types of plants. Mahonia in landscape design:

In addition to aesthetic perception, holly mahonia in the garden has a practical function. The culture belongs to early honey plants, attracts pollinating insects. Weeds do not grow under the dense canopy of the bush. Berries are used for jam, baking fillings, in folk medicine.The plant is frost-resistant, can be used in landscape design in regions with a temperate climate.

What types of Mahonia are suitable for creating a hedge

In its natural habitat, Mahonia has about 80 varieties, different in the shape of the bush, the structure of the leaves, the color of the inflorescences. On the basis of wild species for landscape design, hybrids from creeping to large-sized ones have been created. To create a hedge, in addition to the holly look, are suitable:

How to plant Mahonia to create a hedge

To create a hedge from holly mahonia, two-year-old seedlings are chosen. Work is carried out in the spring before sap flow. Planting sequence:

The distance between the bushes is at least 1 m. The culture slowly grows upwards, but intensively forms root shoots, in 3 years it can completely fill the free space.

Mahonia holly releases berberine into the soil, a substance poisonous for fruit and berry crops. Plum, honeysuckle, apple trees can be planted nearby. It is not recommended to place currants, raspberries, gooseberries in the neighborhood, berberine inhibits the vegetation of these plants.

Important! Do not place holly juniper near Mahonia, its proximity to it leads to the spread of rust.

This is the only threat to culture. Mahonia holly does not get sick, garden pests do not parasitize on it. Possible damage is a burn of young leaves and freezing of shoots, therefore protection is required for the winter.

The pruning time of Mahonia holly depends on the planting density. If the planting is rare, the plant is not touched until it fills the entire space. In early spring, cosmetic cleaning is carried out, old branches are removed, young branches are cut off by a quarter. If the goal of landscape design is to form a hedge, after reaching the desired density, pruning is done 2 times a year.

At the first stage, they give the desired shape, then they maintain it during the summer. The main pruning is early spring, mid-August. The landscape design technique includes an option when stunted flowering perennials are planted near Mahonia.So that the holly mahonia does not interfere with the growth of flowers, in this composition, the lower young shoots are cut off from the main trunks, the leaves are removed. Only the upper part of the bush remains dense.

What plants is holly mahonia combined with?

In the spring, Mahonia is harmoniously combined with early flowering plants:

In summer, Mahonia holly gives color to the composition with shorter and higher flowers:

Looks harmoniously with cotoneaster, Japanese quince, irga. In the design of the territory, preference is given to the neighborhood of large coniferous trees: thuja, cypress, Japanese pine. Magonia is defined in the foreground, as a tapeworm or in one line for tamping conifers. To create a hedge, they are planted alternating:

Shrubs have different terms and duration of flowering, different color of leaves. The requirements for care and pruning time are the same. The photo shows an example of the use of holly mahonia in the composition in landscape design. 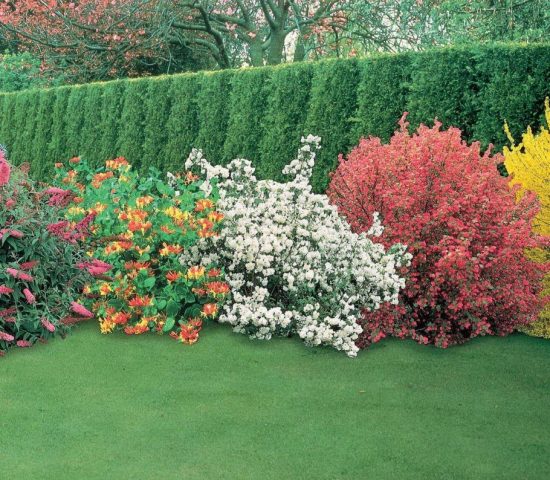 Holly Mahonia in landscape design offers unlimited creative possibilities for professionals and amateurs. The shrub has a decorative habit throughout the year. It harmoniously complements any composition. The variety is undemanding in care and soil composition, frost-resistant. It can grow in an open area and in partial shade.

Recommended entries
Rabatka in the country
Rolled lawn on the site - advantages and types
Clematis - useful ideas for decorating a summer cottage
English roses in garden design + photo
Do-it-yourself trellis and arches for climbing roses
Flower garden of continuous flowering perennials
Pergolas in landscape design
Give feedback Cancel reply
Recommended entries
Low-growing late tomatoes
Low-growing flowers for the garden, blooming all summer
Wireworm in the garden: how to deal
What grass to sow so that weeds don't grow