Rough hydrangea is a plant with beautiful flowers, belongs to the family of the same name. It is of oriental origin and grows in the wild on the coast of China and Japan. In the 19th century, hydrangea came to Europe, where it immediately fell in love with many garden design lovers.

Most species of the Hortensia family are shrubs up to 3 m high and 2 m wide. Some of its representatives have a tree-like shape, in addition, vines are also found among them. Hydrangea bushes have thick branches. They have large inflorescences of a white or lilac hue. 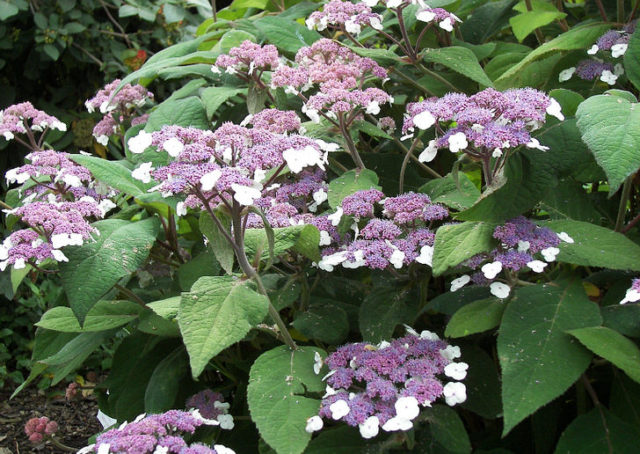 In the middle, they consist of many small flowers, around the perimeter they are surrounded by several large white flowers with four petals.

The leaves can be quite large - up to 35 cm long and 25 cm wide. Their colors change during the season. Young foliage is dark green, velvety. Towards the end of summer, it changes color to dark orange. The root system is powerful, branched.

The plant is very hardy: hydrangea can be grown in difficult conditions and at relatively low temperatures. In temperate climates, it can be cultivated almost everywhere. It blooms in late summer or early autumn.

Currently, there are several varieties of rough hydrangea. In addition, we are constantly working on getting new ones. The most popular varieties of this culture are considered below.

The height of this hydrangea is 1.5 m. It has rough leaves, covered with fine hairs. Their length reaches 35 cm, width - up to 20 cm. The inflorescences are quite large - in some specimens the diameter reaches 20 cm. Rough Hydrangea Macrophila is shown in the photo below. 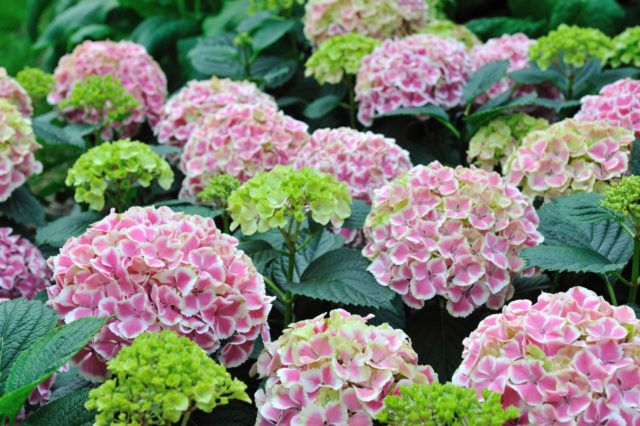 The spherical inflorescences of this variety have a variety of shades, in general, the color of the plant depends on the acidity of the soil.

The height of the crop can reach 4 m. It is one of the most popular varieties with velvety leaves. The main feature of this variety is a gradient change in color within one inflorescence and a smooth transition from a lilac shade to pink (and then to blue) over the area of ​​the entire bush. In addition, on some plants, the petals can be either white or have a white edge. 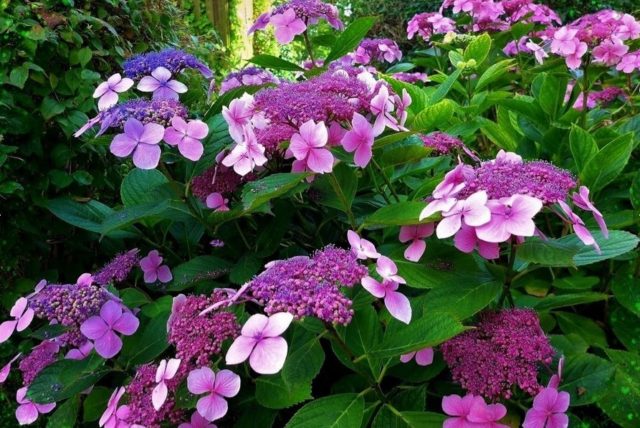 Flowering is quite late and long, it begins in September and lasts until the first frost

The variety introduced relatively recently. It has huge inflorescences - up to 30 cm in diameter. 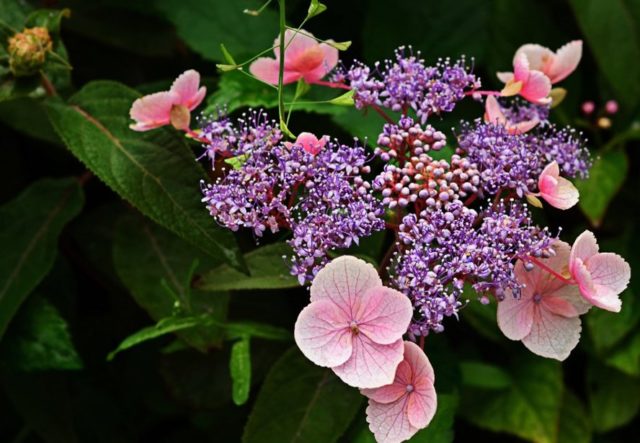 The leaves of this variety also change their color, but, unlike the classic change from green to orange, it has a transition from silver to olive

The color of the shoots also changes over time: as the temperature decreases, they turn red.

Important! The variety Hot Chocolate, even without foliage, has a high decorative effect due to the stems of a characteristic color.

Rough hydrangea is widely used in landscape design. Large bushes can be used as a monoculture in large areas.From them, you can create dense hedges, use them as curb plants for wide paths.

As a separate design element, rough hydrangea will look beyond any competition, since bright and beautiful flowers attract attention. 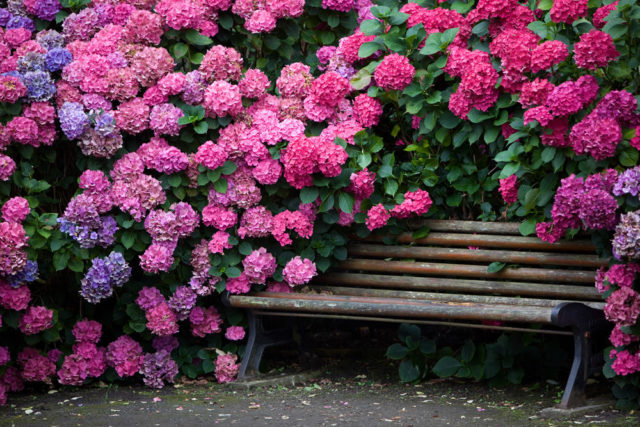 It is also good to use rough hydrangea as a central element of a large flower bed, surrounded by bushes of bright and large plants, the flowers of which will contrast with it. She looks good surrounded by variegated annuals.

Hydrangea has good winter hardiness, however, at frosts of about -30 ° C, it is recommended to insulate the near-trunk circle in order to protect the plant roots from freezing. Fallen leaves of trees or sawdust can be used as a covering material.

Planting and caring for a rough hydrangea

Planting and caring for a rough hydrangea is not particularly difficult. The only thing that should be given close attention is watering, since the plant needs a lot of moisture.

Selection and preparation of the landing site

An ideal place for a rough hydrangea is an area sheltered from the wind in partial shade. The soil must be nutritious and have a pH level of at least 5.0 (be slightly acidic).

Preliminary preparation of the site for rough hydrangea consists in clearing it of weeds and applying mineral fertilizers (up to 20 g of superphosphate per 1 sq. M). This must be done two weeks before planting. Usually, it is carried out in the spring.

Before planting, a seedling of a rough hydrangea should be treated with a growth stimulant by immersing its roots, for example, in Epin's solution. Immediately before installing it in the pit, it is recommended to spray it with a 0.2% solution of potassium permanganate in order to disinfect it from fungi and pests.

Landing is carried out according to the following scheme:

After planting, the plant is not watered for a week, then go to the standard watering schedule. 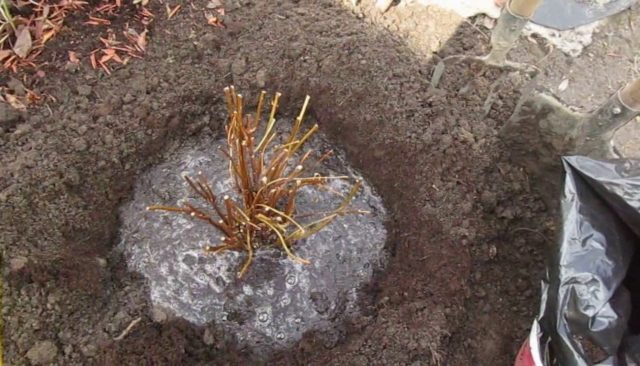 It is recommended to immediately mulch the bush with a layer of peat 5-10 cm high.

Rough hydrangea is a moisture-loving culture. Watering is carried out every 3-4 days. Their norm is from 30 to 50 liters of water under one bush. It is advisable to renew the mulch layer every 1-1.5 months.

In the first and second years after planting, the rough hydrangea is not fed. Starting from the third year, the following feeding schedule is recommended:

In the latter case, it is advisable to purchase a specialized feed mixture for ornamental plants.

The plant is not pruned for the first 2-3 years. In the future, shaping and sanitizing the crown is performed 2 times a season. The first is performed immediately after the snow melts. 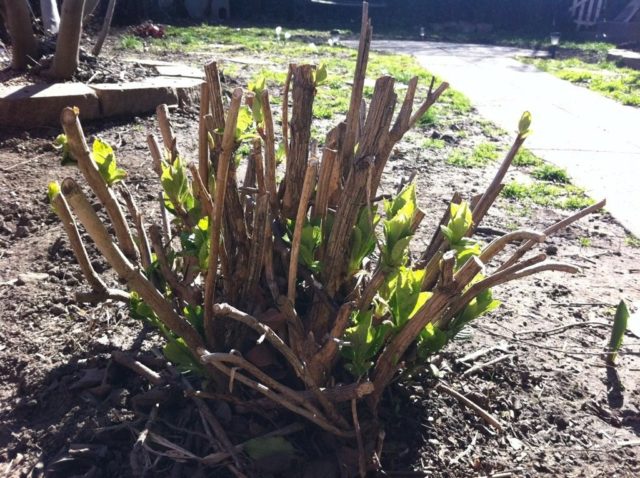 In the spring, except for the removal of non-wintered shoots, all last year's are shortened to the lowest bud

Sanitary pruning is done in the fall. It is part of preparing the plant for winter.

At the end of autumn, the plant is sanitized, damaged and too old shoots are removed from it. After that, water-charging irrigation is done and the trunk circle is mulched with a layer of straw, sawdust or fallen leaves up to 20 cm high. In the case of a particularly cold climate, the protective layer is covered with a film or agrofibre on top.

Important! In order to avoid overwhelming in the spring, as soon as the snow melts, the film and the layer of mulch should be removed.

Unlike many ornamental crops, seed propagation of rough hydrangea is used quite often, since plants grown in this way begin to bloom relatively early.

The most effective method of propagation, which gives the maximum amount of planting material, is by cuttings. They are obtained from side branches. 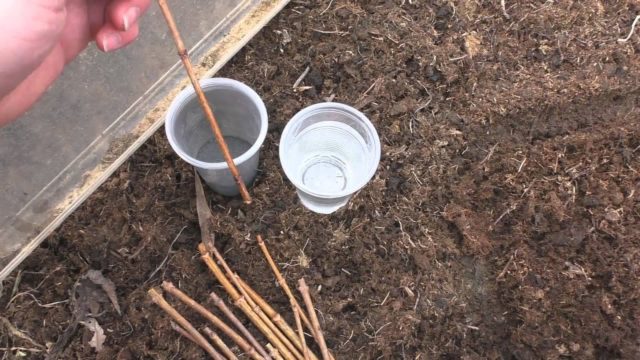 The length of the cutting should be at least 15 cm, and only one bud is enough on it

Rooting is carried out in a substrate consisting of peat and sand for a month. The soil must be kept moist. As soon as the cutting reaches a length of 30-40 cm, it is transplanted to a permanent place.

The immunity of the rough hydrangea is very high. The plant is rarely affected by diseases and pests. If this happens, then the reason is likely to be improper agricultural technology.

The most common problem in rough hydrangea is leaf chlorosis. In this case, the color of the plates begins to change to yellow, but the veins always remain green.

Over time, the leaves become covered with dark brown or brown spots, later on, holes appear in their place.

Iron deficiency is the cause of the disease. For treatment, the damaged areas should be removed, and the remaining parts of the plant should be treated with a 4.5% solution of ferrous sulfate.

In second place in terms of frequency of occurrence is the well-known powdery mildew - a disease caused by fungi of the Erisyphus family. 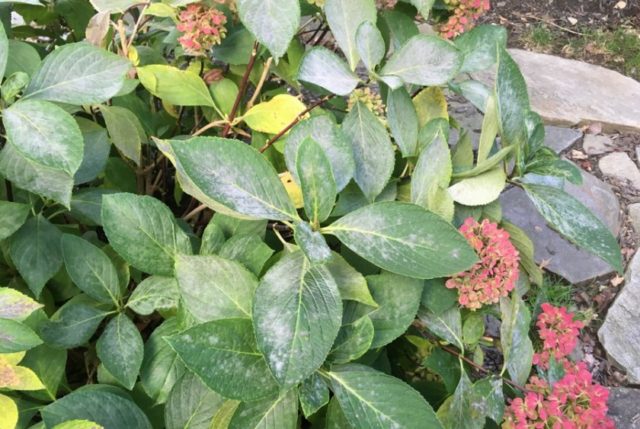 Pale gray spots appear on the leaves, which darken over time.

Of the pests, the rough hydrangea is most often attacked by a spider mite - a small representative of arthropods that feeds on plant sap. It is less than a millimeter in size and is sometimes problematic to detect. 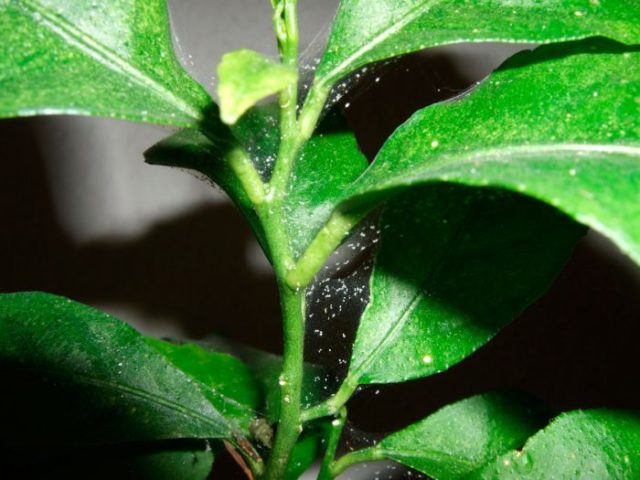 The symptomatology of a tick lesion is very characteristic - cobwebs with small white dots appear on the lower part of the leaves.

The best remedy against this pest is powerful acaricides: Actellik, Askarin, Iskra.

Important! The use of such means also destroys other parasites - aphids, bedbugs and weevils.

Rough hydrangea is a beautiful plant with a wide variety of colors and shapes. Besides the beautiful flowers, the large leaves that change color at the end of the season are also very decorative. The plant is widely used in landscape design.

Andrey Bely, 40 years old, Oryol
Rough hydrangea is one of the most beautiful plants that grows and reproduces beautifully in our climate. Its large inflorescences look very attractive and extravagant. I have been growing this crop for more than one year and I can say that it is a very resistant and stable plant among perennials. Even cold winters do not have much effect on its appearance and flowering intensity. She perfectly tolerates cuttings and can be given to almost any shape. At the same time, caring for it is very simple and cannot be compared in complexity, for example, with phlox, and even more so, roses or peonies. I recommend rough hydrangea to anyone who wants to get a beautiful plant at minimal cost.
Anna Mikheeva, 37 years old, Nizhny Novgorod
Rough Hortense came to me by accident. I didn’t know what to do with it and put it in the corner of the garden, especially not thinking about what would happen next. But as soon as it came to the flowering of this beautiful bush, I decided to immediately transplant it to a more attractive place and arrange a flower bed around it.Three years later, the hydrangea grew and became the center of a beautiful composition, which, in addition to it, includes asters, irises and poppies. Now a huge flower bed in the center of the site is my pride, and all the guests envy me.
Recommended entries
Hydrangea serrata: varieties with photos and names, reviews
How to prepare hydrangea for winter in the Urals
Hydrangea Summer Snow: description, planting and care, photo
Hydrangea Magic Pinkerbell (Magical pinkerbell): reviews, description, photos
Large-leaved hydrangea: pruning for winter, spring and autumn
Large-leaved hydrangea Bodensee: planting and care, photos, reviews
Hydrangea paniculata Dharuma (Daruma): description, planting and care
Hydrangea stalked Miranda: planting and care, photos, reviews
Hydrangea chlorosis: treatment, photo and prevention
Give feedback Cancel reply
Recommended entries
Hydrangea Weems Red: description and photo
Hydrangea Panicled Vanille Fraise: pruning, frost resistance, in landscape design
Hydrangea paniculata Phantom: planting and care
Hydrangea: propagation by cuttings in autumn