How to choose a mechanical snow shovel

It is convenient to remove snow with a simple shovel or scraper in a small area. It is difficult to clear a large area with this tool. In such a situation, it is better to have a mechanical snow shovel on hand, which several times reduces the complexity of the process. What kind of tool it is, and what it is, we will try to find out now.

What snow shovels are power tools

Mechanical snow shovels have many popular names. Most often, the name of the inventory contains the word "miracle" or "super". The uncomplicated design of this snow removal equipment significantly reduces labor costs. This is due to the fact that you do not need to pick up snow with a shovel and throw it to the side with your hands. The scraper is simply pushed in front of you. The built-in mechanism captures the snow layer and independently throws it to the side.

There are no clear definitions of the belonging of any snow-removing equipment to mechanical shovels. It can be hand-held and motor-powered. Often referred to as mechanical shovels electric snowblowers low power. In industry, this definition includes any inventory, the mechanism of which allows you to move the bulk mass to another place.

If, in general, we characterize mechanical shovels, then tools with the following parameters can be attributed to this category:

The cost of any mechanical shovels is within 10 thousand rubles. Anything that is more expensive is reasonably categorized as a snow blower.

A variety of mechanical shovels

The snow shovel got this name due to a special mechanism that collects the cover, grinds it and throws it aside. Most often it is a screw. Its appearance resembles a spiral made of circular knives. In electric shovels, instead of a screw, a rotor with an impeller is sometimes installed. This technique is called differently: air or vortex machine, vacuum cleaner, etc. Most often, rotary shovels are found in homemade production, so we will not consider them. As for the auger instrument, then it is manual and powered by electricity. 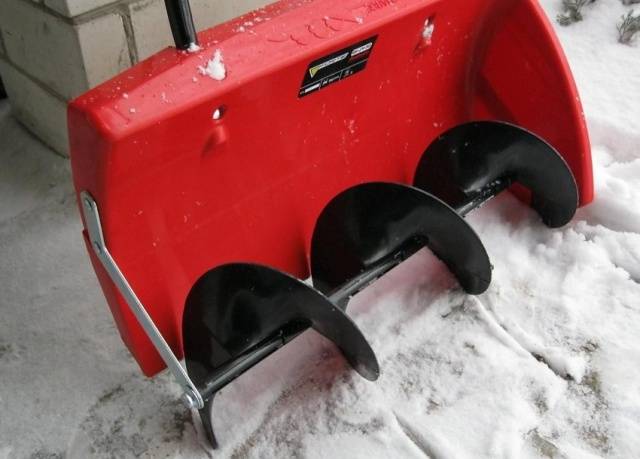 The appearance of a manual power shovel resembles a scraper or a tractor blade of a reduced size. The auger is fixed in front. It usually has 2 or three turns of the spiral. The mechanism works quite simply. The man by the handle pushes the blade in front of him. The auger blades touch the hard surface and begin to rotate from the pushing movements. The spiral captures the snow and, pressing it against the blade, throws it to the side.

Attention! When working with a hand auger shovel, the optimal slope of the tool must be observed. Without touching the hard surface, the knife will not rotate. If the shovel handle is lifted up strongly, the auger will hit the ground and jam.

The rotating auger is capable of throwing snow to the side to a maximum distance of 30 cm. This greatly limits the use of hand tools. It is convenient to use a dump to clear a track of any length, but narrow, for a maximum of 2-3 passes. This is due to the fact that after each cleaned strip, snow accumulation thrown by the auger remains on the side. This means that on the next pass the thickness of the cover increases. It will already be more difficult to knock it over with the blade, and the tool may not take the third lane at all.

Important! The hand auger shovel is designed for loose snow removal. The auger will not cut the caked and icy layers. 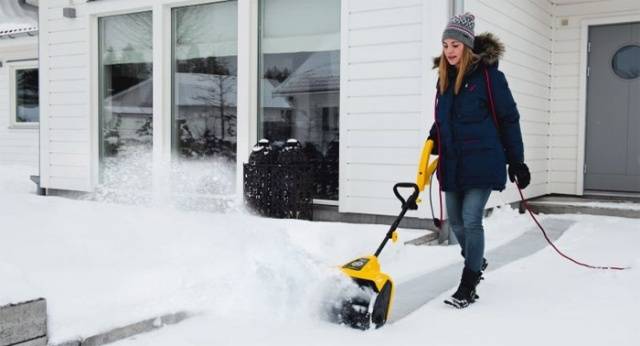 Electric shovels help to reduce labor costs when clearing snow. The device is simple. Inside the body there is an electric motor connected through a gearbox to the auger. On top of the body there is a sleeve with a visor for throwing snow.

Most models only work in one mode. The electroscope does not go by itself. It still needs to be pushed, but the auger rotating from the engine at high speeds allows you to quickly remove the snow. In addition, the discharge occurs several meters to the side, which depends on the power of the electric motor. In addition, this parameter limits the working width, which for most models is in the range of 20-30 cm.

The limitation of motor power is directly related to the weight of the shovel. The more efficient the engine, the greater its mass. Electric motors with a power of 0.7 to 1.2 kW are usually installed on household tools. There are also more powerful electropaths. Their weight exceeds 10 kg. Such snow blowers are equipped with a powerful motor up to 2 kW and are characterized by a working width of up to 50 cm.

Household electric shovels are similarly limited to small footprint applications. Their plus is to speed up and facilitate the process of snow removal. The second important limitation is the characteristics of the snow cover. An electric shovel cannot cope with a layer thickness of more than 25 cm. The tool cannot remove snow in layers. If it is driven into a large snowdrift, the discharge through the branch pipe will become inaccessible. The electric shovel will not be able to advance, it will get stuck, and the snow from under the auger will fly in different directions.

Caked or icy cover is also too tough for the instrument. The fact is that the auger is often made of plastic or rubber. The knives are more likely to rub themselves against the ice than chop it. Similarly, wet snow cannot be removed with an electric shovel. It will stick in the sleeve and on the auger. It is also important to remember that the tool is powered by electricity. Water from wet snow can cause a short circuit in the appliance.

Another limitation of the electropath is their use only on flat, hard-surfaced terrain. The tool is ideal for cleaning paved sidewalks, concrete or tiled surfaces. It is better not to work with an electric shovel on the ground, gravel or just an uneven surface. The plastic auger will grab rocks and frozen ground, causing it to jam and break.

Choosing a mechanical shovel for home use

Before giving preference to a particular model of a mechanical shovel, you need to find answers to a number of important questions:

It should be borne in mind that an electric shovel is able to cope with the accumulation of loose snow up to 25 cm thick. A conventional auger tool will not take a layer more than 15 cm thick.

Advice! In snowy regions, a mechanical shovel is of little use. Here it is better to give preference to a powerful snow blower or a simple shovel.

Any type of mechanical shovel is designed to remove snow from an area of ​​no more than 50 m2... This can be: a playground or path in front of the entrance door to the premises, an entrance to the garage, a courtyard, a playground, the territory adjacent to the house. An electric shovel can remove snow from a large flat roof of an industrial building or high-rise building.

If the tool is needed for cleaning narrow paths, then a regular auger shovel is enough. On a wider area, the snow will have to be shifted many times, so it is better to use an electric shovel here, since the snow throw increases up to 5 m.

Important! The power tool can work continuously for about half an hour. After this time has elapsed, the motor needs about 30 minutes of rest. 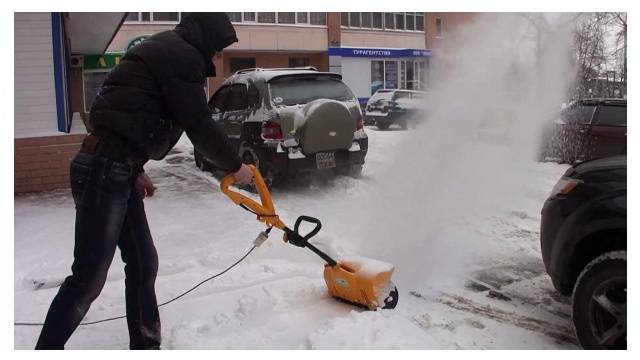 If the choice fell on an electric tool, then there is a choice: models powered by a battery or an outlet. The first type of shovel is convenient due to its portability. However, the battery significantly increases the weight of the tool, so it is unreasonable to classify it as mechanical shovels. Electric shovels, powered by an outlet, are lightweight, but their performance is limited by the length of the carrying. 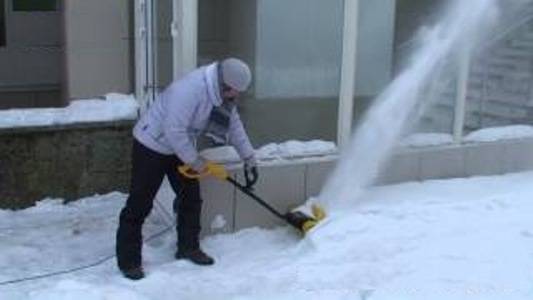 It is important to pay attention to the quality of the wire from which the extension cord will be made. The plastic-braided cable will crack in the cold, and the fabric cover is soaked in water. It is best to use a wire with a rubber or silicone protective layer. Children cannot be trusted with power tools. It is traumatic. If desired, the child can work with an ordinary auger shovel.

As a summary, let's take a look at the mechanical shovel models. 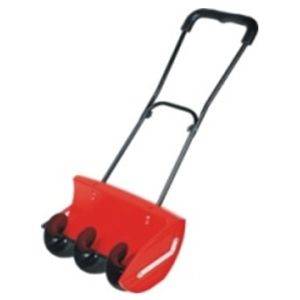 The Forte hand auger tool has a working width of 56.8 cm. Snow is ejected to the right. The mass of the snow removal equipment is not more than 3.82 kg. The manual auger blade is useful for clearing snow from paths in hard-to-reach places and in small areas. 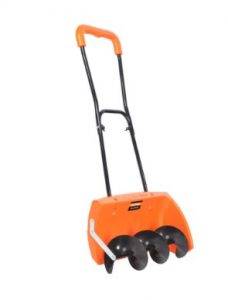 The mechanical auger model is characterized by a capture width of 60 cm. The height of the blade is 12 cm. The auger is metal, but it can only handle loose snow. Tool weight - 3.3 kg. The foldable handle and compact dimensions allow the blade to be transported in the trunk of a car.

The video provides an overview of a mechanical shovel: 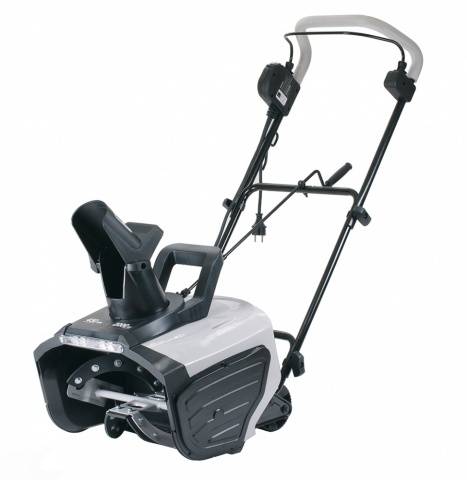 The maneuverable electric shovel is characterized by a grip width of 40 cm, while the height of the snow layer can reach 25 cm. The range of snow throwing through the sleeve is from 1 to 8 m. The unit is equipped with a 2 kW electric motor with an overheating protection system. There is one screw speed. For ease of movement, small wheels are installed on the frame. 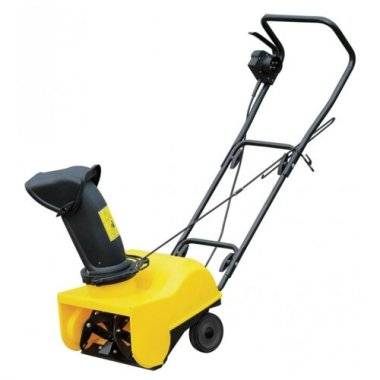 The compact electric shovel is powered by a 1.3 kW motor. The bucket grasp width is 34 cm. The maximum grasp of the thickness of the snow layer is 26 cm. The snow is ejected at a distance of 3 to 5 m. The auger blades are made of rubber. Sleeve visor rotates 180about... Unit weight - 10.7 kg.