Heavy snowfalls create traffic congestion and fill up yards and sidewalks. Snowblowers they are able to quickly clear the roadway or large areas, and where they cannot enter, it is necessary to remove snow and ice manually. Special equipment helps to carry out this work. In retail outlets, a variety of snow removal tools are sold, which, if desired, are easy to make with your own hands.

In rural areas, snow is used to cleaning with hand-made tools of their own making. It will not be difficult for any owner to put together a plywood shovel or an aluminum sheet scraper in an hour. City dwellers have nowhere to make snow-removing equipment, so people go to the store for it.

The most common tool for clearing snow from lanes is Shovel... Such inventory is presented in a wide range. Shovels differ in shape, size, material of manufacture. The most common tool is with a plastic scoop. These shovels are lightweight, corrosion resistant and do not adhere to wet snow. 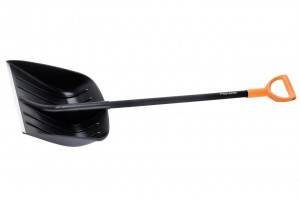 Important! The weight of a plastic shovel ranges from 2-3 kg. The tool is lightweight, comfortable and does not absorb moisture, as is the case with homemade plywood scrapers.

A more productive tool is a scraper. In one pass, it cleans a wide strip of snow. The design of the scraper is reminiscent of a scraper / shovel mix. The front of the scoop is protected from abrasion by a steel strip. There are stiffening ribs on the working tool blade itself, but they still play the role of skis. Thanks to these runners, the scraper runs easily in the snow. 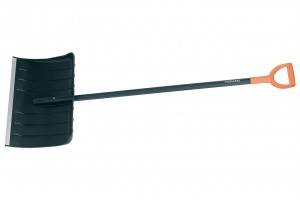 Another model of the scraper - the scraper - has a spacious bucket. The high-sided plastic scoop is controlled by a U-shaped handle. To clear the track dragging just pushing in front of you. The snow collected inside the bucket is unloaded at a selected location. 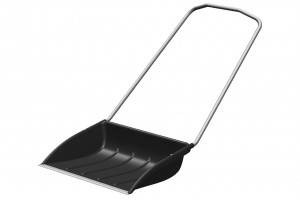 The video shows how to work with a drag:

On sale you can sometimes find snow removal devices of a rather interesting and unusual design. One such tool is miracle shovel "Sno Wovel". The development of foreign manufacturers is unusual by the presence of a large wheel on the handle snow shovel... The tool can work like a hand excavator. The bucket is pushed forward with a long handle. Due to the wheel, it easily moves forward, raking up a large mass of snow. Unloading the snow shovel is performed by pressing the handle down. When performing these actions, the bucket rises sharply and throws snow far ahead.

Important! The manufacturer made accurate calculations of the size and shape of the lever, and also equipped it with a hinge mechanism near the wheel. This design reduced the load on the back muscles by 80%. 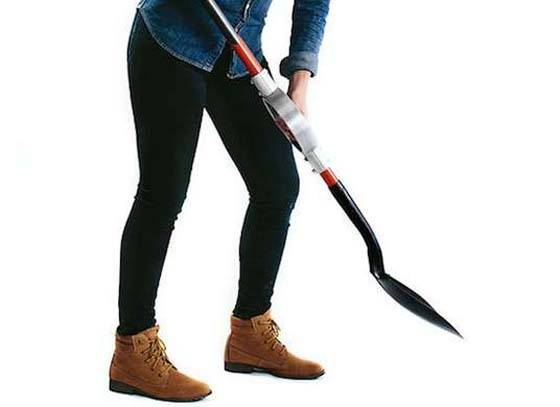 Continuing the conversation about snow shovels, there is one more clever tool to pay attention to. A feature of its design is the presence of an adjusting mechanism on the handle. Thanks to the hinge, the middle of the handle of the super snow shovel is able to rotate. A person is given the opportunity to choose from the existing 16 positions of the most convenient arrangement of the instrument in his hands. Such an invention is expensive at around $ 80. 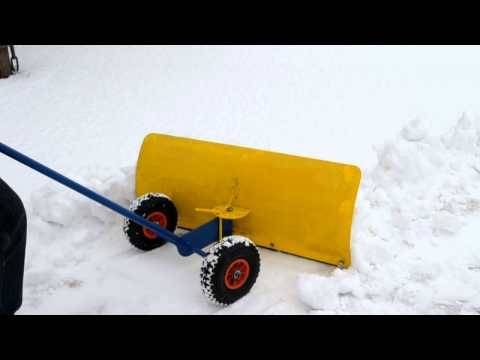 The upgraded device for removing snow and ice is a scraper on two wheels. This snow plow can be called a hand bulldozer. A feature of the tool is a scraper, shaped like a shovel and blade of a tractor.It is fixed to a steel frame. If necessary, the blade angle can be adjusted to move the snow sideways to the shoulder. The scraper is driven by pushing movements of the operator through a long handle.

The production of manual snow plowing bulldozers is established in production, but it is not difficult to assemble them on your own. It is only necessary to cut a semicircular segment from a large diameter pipe. This will be a dump. To prevent him from scratching the paving slabs, a soft knife made of thick rubber can be bolted from below with bolts. The finished shovel is attached to the wheel frame of the baby carriage, the handle is adjusted and the snow plow is ready.

The video shows the manual snow plow in action: 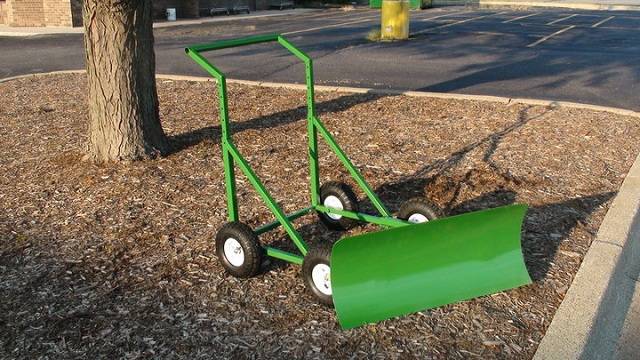 We have already covered the two-wheeled manual blade. But the manufacturers did not stop at the achieved result and developed a four-wheel snow plow bulldozer. The device of this blade differs only in the presence of an additional wheelset. In management, such a bulldozer is more stable, but less maneuverable. The shovel is similarly equipped with a swivel mechanism that allows you to set the desired angle.

The advantage of the four-wheeled bulldozer is its all-season use. In winter, it is an excellent snow scraper. In the summer, the blade is removed, and the body can be adapted to the frame. The result is an excellent trolley for transporting heavy loads.

Important! In the store, a four-wheeled manual bulldozer can be found under the name Snow Bully. It costs around $ 300. A homemade snow blower of a similar design will cost many times less.

The video provides an overview of the four-wheel snow plow bulldozer: 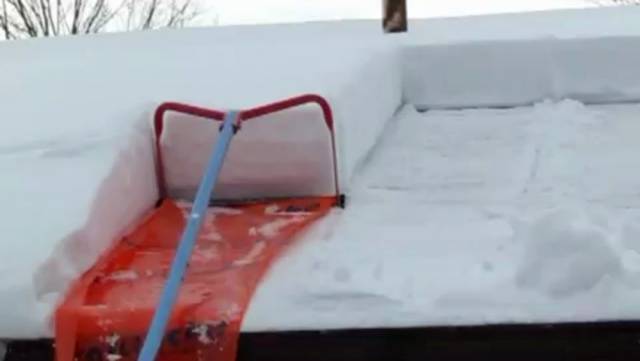 It is not only roads and sidewalks that are covered with snow. It accumulates in large caps on the roofs of houses. An avalanche is dangerous for people passing near the building. Large build-ups can deform the roof and damage the roof covering. A special scraper helps to remove it. If you can climb onto a flat roof and dump snow with an ordinary shovel, then with a pitched roof it is more and more difficult. This was taken into account by the manufacturers when developing the scraper.

First, the snow blower was equipped with a telescopic handle. The scraper can be used to reach the ridge of the roof while standing on the ground. Secondly, instead of a traditional bucket, a frame is attached to the handle. It can have different shapes, but more often it is made in the form of the letter "P". A long strip of synthetic fabric is attached to the lower frame element. When a person pushes the scraper up the roof, the frame cuts off the snow cap, which randomly slides over the strip of fabric and falls to the ground.

Important! The scraper for cleaning roofs from snow is a specific tool that cannot be adapted for other work. 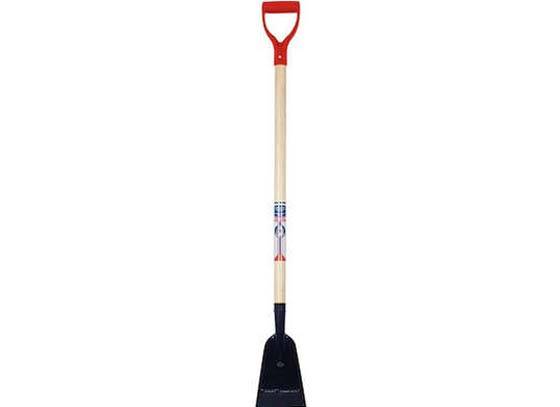 It is not possible to remove thick ice build-ups with a snow shovel and scraper. A more serious tool is needed here. Craftsmen adapted an ax blade for these purposes. A handle from a metal pipe is welded to it vertically. They hit thick growths with a wide icebreaker. The bulk of the ice is cracked, and the remnants are simply scraped off, pushing the blade of the chopping tool down a slope.

The factory tool "Snow Spear" was made according to a similar principle. Here, a wooden handle is attached to a metal wide blade. The design of the icebreaker is almost the same, only in the store version it will cost a person about $ 22. 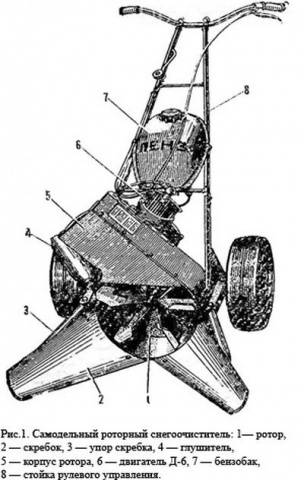 Of the mechanical devices for clearing snow with your own hands, the rotary snow plow is very popular. Its diagram can be seen in the photo. 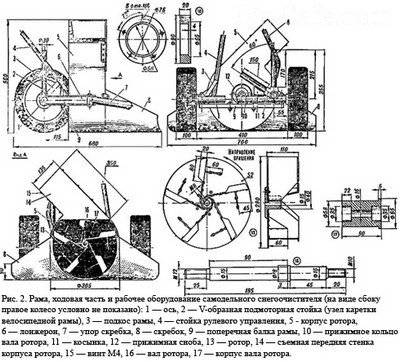 The design of the snow blower consists of a frame, a gasoline engine, a wheelset and the rotor mechanism itself. 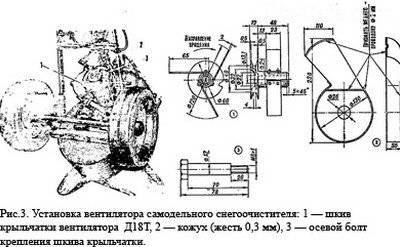 The principle of operation of a mechanical snow blower is based on the capture of snow by the rotor blades. In the case, it mixes with air and is thrown out through the branch hose to the side at a distance of up to 8 m.

There are a lot of factory-made snow removal equipment.More complex and productive tools are expensive. If you carefully study their design, then almost any scraper can be made independently. A snow removal tool will turn out to be no worse than a store one, but it will cost several times cheaper.