Gardeners have invented many different devices that make it easier to cultivate the land. Some inventions have already been put on the assembly line and are being released in large quantities. These tools include a miracle shovel that allows you to manually dig up a garden without back pain.

How the miracle tool works 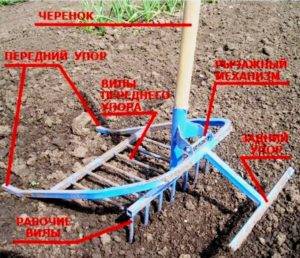 The presented diagram shows which nodes the miracle shovel consists of. Now let's figure out how it works:

Summer residents do not always buy such a tool, because it is easy to make it yourself. This project does not require complex drafting. Simply, guided by the diagram, you need to understand the essence of the device of the miracle shovel, and then weld it from metal, selecting the dimensions to suit your requirements.


The device and principle of operation of different miracle shovels are almost the same. There are only a few design modifications. Let's look at a few examples of such a tool:

On sale you can find a Tornado shovel or a similar miracle tool without a name. They all have approximately the same drawings and dimensions. They can only differ in the length of the teeth and insignificant modifications of the body. 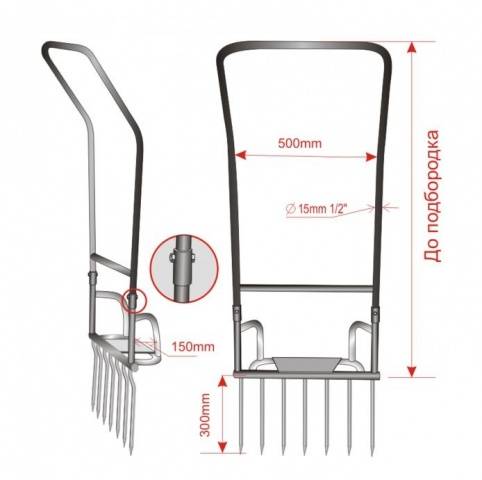 The photo shows a do-it-yourself drawing of a miracle shovel from one segment. The tool consists of a working pitchfork.Efficiency and ease of operation depends on the distance of the stop. The longer it is, the harder it will be to dig the ground. However, the advance step depends on the length of the stop. The optimal size is considered to be a stop with a length of 15–20 cm, but it all depends on the physical condition of the worker.

The hinge mechanism and the second stationary segment are absent from the shovel. Because of this, the structure is easier to manufacture. Although working with a classic ripper is more difficult than a shovel consisting of two segments.

Advice! If different people work with the ripper, the length of the handle and the stop are made adjustable.

Making a classic shovel with your own hands is quite simple. Difficult here is only to give the teeth a special shape, as shown in the diagram. Due to these bends, the force is evenly distributed on the pins and it is easier for a person to dig. The teeth are made from hardened steel. It is optimal to use the services of a forge or, in extreme cases, find fittings. The body itself is welded from a round or square pipe. The rod cannot be used for these purposes, since the tool will become unmanageable. 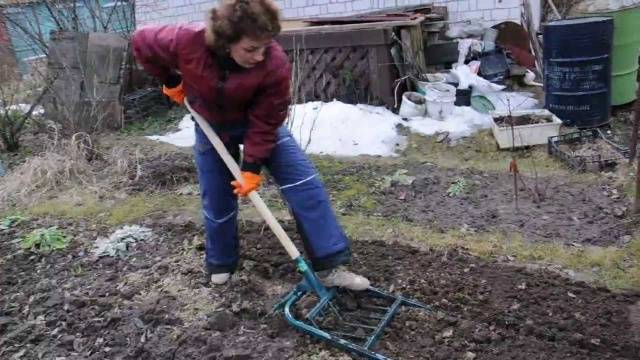 It is more difficult to make a do-it-yourself miracle shovel from two segments. But such a tool is more efficient and easier for them to work with. The structure can be welded according to the scheme of the Plowman or the Mole. This is the personal preference of the owner. All the main parts of the shovel are presented and numbered below in the photo. Guided by this diagram, we will look at how to make a miracle tool at home: 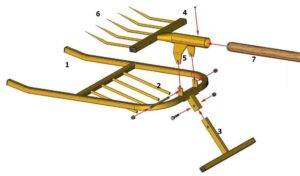 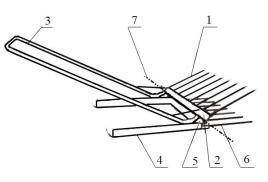 To make it convenient for different people to work with a homemade miracle shovel, the back stop and the handle must be made with adjustment in length. Here you need to show imagination. You can cut inserts from the pipe, and drill holes for cotter pins.

Advice! If, during the first tests of the miracle shovel, bending of the forks' teeth is observed, they must be calcined red-hot on fire, and then sharply dipped into a metal container with alkaline water.

In the video, see the procedure for making a miracle shovel:


For now, let's read the reviews about this tool.

Irina Anatolyevna, 46 years old
When my husband and I bought a suburban area, we immediately bought a miracle shovel. It was necessary to dig the virgin soil, but the tool did not cope with this work. I had to work with a bayonet shovel. When the garden became cleaner from grass, the miracle shovel was used. As a ripper, it's a great tool, but you'll have to sip on it.
Vladislav, 39 years old
Before buying a miracle shovel, I took it for a test from a neighbor. For a whole day of work, she did not impress me. Firstly, the instrument is heavy and the hands get very tired. Secondly, it loosens well, but the roots weeds stay in the ground. We have to dig in with a bayonet shovel.
Recommended entries
Miracle Shovel Mole
Electric snow shovel
Snow scraper on wheels
Telescopic snow scraper
Fiskars snow shovel
Super Snow Shovel
How to choose a snow shovel on wheels
How to choose a mechanical snow shovel
Miracle snow shovel with auger
Give feedback Cancel reply
Lunar
calendar 2021
January February March April May June July August September October November December
Recommended entries
Scraper-scraper Snowxpert 143021
How to dig up the earth by hand: with a shovel, quickly, easily, a miracle shovel, in spring, autumn, photo, video
How to choose a mechanical snow shovel
Miracle snow shovel with auger