Vitamins for cows before calving and after

Internal reserves of cattle are not endless, so the farmer needs to control the vitamins for cows after calving and before giving birth. Substances affect the health of the female and offspring. A diet compiled according to the rules will saturate the animals with important components and save them from problems in the future. 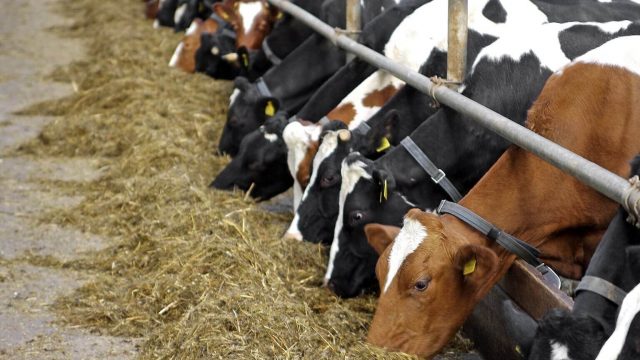 Features of feeding a cow before and after calving

Pregnancy and childbirth is a difficult period during which the animal's body expends a huge amount of energy. To get healthy offspring and not harm the female, you need to correctly draw up a menu. Cattle need nutrients to maintain biological activity. Chemical processes in the body take place with vitamins and minerals.

Not all ingredients are required by a cow before and after calving. Some of the useful elements are secreted by the digestive system. During the dry period, the animal does not have enough food reserves. Problems often arise in winter and spring due to a lack of sunlight, fresh grass. In order for the cow to receive the necessary vitamins, the amount of proteins, fats and minerals in the diet is increased.

2 weeks before calving, bean-cereal hay is introduced into the cow's menu, the amount of concentrates is reduced. To prevent excess fluid from accumulating in the body, do not give juicy food. Excess moisture during childbirth leads to dangerous complications, edema in the udder. The rational menu contains (in percentage):

A pregnant cow is fed 3 times a day at the same time. Use high quality hay, bran and cornmeal. Spicy and rotten foods are hazardous to health. Sprinkle the food with crushed chalk and salt. Warm fresh water is given before each meal.

While the embryo is developing, it is necessary to provide the female with nutritious food. Before giving birth, the body stores vitamins, fats and proteins. Before calving, the individual should be well-fed, but not obese. Control the intake of sugar, starch, otherwise there is a risk of getting diseases of the digestive system. On average, the weight increases by 50-70 kg.

After calving, it is important not to overfeed the cow, because disturbances in the work of the gastrointestinal tract may occur. During this period, the body takes vitamins and minerals from the reserves that it accumulated during the dead wood. It is forbidden to starve an animal.

What vitamins are necessary for cows before calving

Before giving birth, cows often lose their appetite. The body draws the missing components from the reserve without consequences for the baby. If the female has managed to accumulate nutrients in advance, then a short refusal of food will not have a negative effect on the fetus. 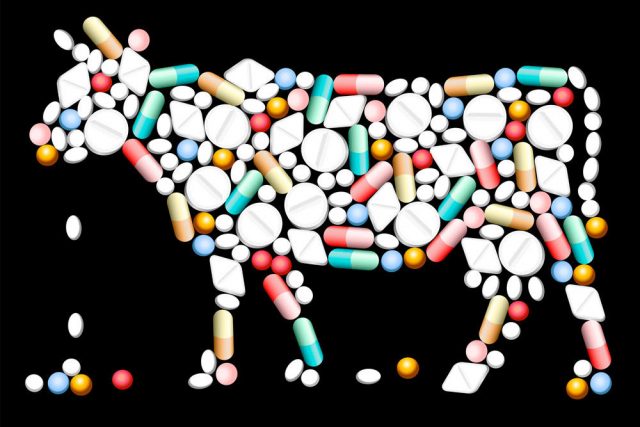 The lack of provitamin A adversely affects the health of the female and the viability of the calf, complications during childbirth and the birth of blind offspring are possible. Under natural conditions, carotene comes from a succulent feed, which is prohibited during dry periods. The daily rate is from 30 to 45 IU, for prophylaxis, 100 ml of fish oil is given within a week.

Important! Injections are used in advanced cases and after being examined by a veterinarian. An excess of vitamin A causes poisoning, so the doctor calculates the dose depending on the condition of the animal.

Lack of vitamins in cows before calving affects the health of the mother and offspring. E-vitamin deficiency gradually develops into the pathology of the uterine mucosa. In the early stages, it leads to resorption of the embryo, and in the later stages - miscarriage or the birth of a sick calf. The norm for an adult is 350 mg per day.In case of deficiency, veterinarians prescribe intramuscular injections of "Selemaga".

Vitamin D is an important component that helps in the absorption of the macronutrient calcium. Lack of this vitamin before calving negatively affects the strength of the bones of the cow and the formation of the skeleton of the fetus. Under the influence of sunlight, the substance forms on the skin of animals. The daily dose ranges from 5.5 IU or 30 minutes under ultraviolet light.

Vitamin B12 in cows before calving is responsible for the formation of blood cells, and if lacking, it threatens the appearance of sick or dead calves. To replenish stocks, professional feed and premixes, high-quality bran and yeast are used. Drug injections are indicated after prolonged digestive problems. For 1 kg of weight, 5 mg of cyanocobalamin concentrate is taken.

What vitamins are needed for cattle after calving

After giving birth, the female is watered with warm water, an hour later, the colostrum is milked and fed to the baby. On the first knocks, the menu consists of soft hay, the next day 1 kg of liquid bran porridge is added. After 3 weeks, the cow is transferred to its usual diet (silage, root crops). It is important to monitor the amount eaten and not to overfeed the cattle, otherwise obesity and indigestion are possible.

For the normal functioning of the body of the giving birth female, the level of useful elements is maintained. If you do not compensate for the losses, then after a couple of weeks, signs of vitamin deficiency in a cow after calving will become noticeable. The standard diet does not completely provide cattle with nutrients, so the menu needs to be changed.

Vegetable food contains a lot of provitamin A. The deficiency is typical for young females and individuals with high lactation. With a deficiency in animals, the eyes become inflamed and the coordination of movements is impaired. Preventive use of fish oil or a course of injections will prevent the problem. The dose for a cow after calving is 35 to 45 IU.

The daily intake of vitamin D is 5-7 IU. After childbirth, adults often lose teeth, note increased nervousness and excitability. The lack of a nutrient in milk negatively affects the health of the calf (deformity of the limbs, developmental delay). The natural source of the element is sunlight. To prevent deficits, the cow must be walked daily. In cloudy weather in winter, irradiate with an ultraviolet lamp in spring.

Vitamin B12 is not found in plant foods. Avitaminosis in a cow after calving is manifested as a violation of metabolic processes in the liver and carbohydrate starvation of cells. The animal does not eat well, dermatitis occurs.

Vitamin E deficiency negatively affects the health of young animals. Calves do not gain weight well, growth and development are impaired. Long-term deficiency leads to muscular dystrophy, paralysis. If cows are not given the necessary component after calving, then destructive changes in the work of the cardiovascular system occur. The daily dose for an adult is 5.5 IU.

After calving, cows have different vitamin requirements. Animals with a high lactation rate are fed 5 times a day, three meals a day are enough for females of average productivity. The basis of the menu is hay, which is chopped and steamed before use. For 100 kg of live weight, 3 kg of the product is taken.

An optimized diet will eliminate emergency vitaminization. To improve milk yield after calving, it is necessary to use juicy types of food when feeding. Oilcake, bran are natural sources of nutrients, the transition to greens improves the absorption of food.

Warning! The veterinarian will determine the need for vitamins for cattle in injections after calving.

Often drugs are used based on 4 components (A, D, E and F). For treatment, they choose concentrated "Tetravit", and for prevention, "Tetramag" is suitable.To find the optimal rate, you need to consult with your veterinarian. A large dose is toxic to the body of animals, and a small dose will not give the desired effect.

What else to add to the diet

For full development, not only vitamins are needed, but also substances responsible for the formation of muscles, bones and the immune system. Protein is involved in the synthesis of cells, forms all organs. Lack of protein in cows after calving manifests itself in the form of deterioration of lactation, increased feed consumption or perverted appetite. Calves often get sick, do not gain weight well.

Trace elements are needed to maintain the vital functions of cows before and after calving. Females lose substances together with milk. Deficiency manifests itself in the form of:

With a lack of copper in cattle, anemia and exhaustion are noted. Adults constantly lick their hair, and calves develop poorly. The microflora of the digestive system is disrupted, which leads to frequent diarrhea. Weakened animals move little, lose vitamins and calcium from the bones. Copper contains hay, grass that grow on red soil and black soil. Feed yeast, meal and bran will help prevent danger.

Iodine is responsible for the endocrine system. The lack of a trace element provokes the death of the fetus or the birth of a dead baby. After calving, the milk yield deteriorates in cows, and the concentration of fat in milk decreases. Iodine enters the body with herbs and hay, enriched with salt and potassium.

Manganese deficiency can cause abortion or calf death. Young animals are born weakened, with congenital organ pathologies. In females, lactation worsens, the fat content of milk decreases. Special supplements will help fill the gap. The substance contains a large amount of fodder flour (from meadow grasses, needles), wheat bran and fresh greens. For preventive purposes, carbon dioxide and manganese sulfate are introduced into the menu before and after calving.

Table salt is given to cows before and after calving to provide the body with macronutrients sodium and chlorine. In the required concentration, the component is not found in plants, therefore, it is added with feed. Without it, the work of the digestive and nervous systems is disrupted, lactation worsens. The substance improves the absorption of food, and has an antibacterial effect.

Professional premixes are used to ensure that the macronutrients phosphorus and calcium (8-10 mg) enter the animal's body during pregnancy.

Mineral iron is involved in the synthesis of blood and internal organs. With a deficiency in cows, liver dystrophy, anemia and goiter occur. 5 weeks before calving, the cow is injected intramuscularly with Sedimin. The recommended dose is 10 ml.

Important! Probiotics are used to restore the microflora of the gastrointestinal tract. The drugs are prescribed to females after childbirth to increase the quantity and quality of milk.

Vitamins for cows after calving and before giving birth are essential for healthy offspring. During pregnancy, the female accumulates nutrients, which she then actively consumes. Deficiency of one element can lead to the birth of a dead or non-viable calf. A well-designed diet contains all the important ingredients. Injections of veterinary drugs will help to quickly eliminate vitamin deficiency.

Recommended entries
Red steppe cow: photo
How to wean a cow from kicking while milking
Treatment of subclinical (latent) mastitis in cows
Calf rickets: medical history, symptoms and treatment
Corolla cellulitis in a cow: signs, treatment and prognosis
Dermatitis in cows on the udder: photos, how to treat
A cow lags on its front or hind leg: what to do
Cattle pneumonia: symptoms and treatment
Uterine prolapse in a cow before and after calving - prevention, treatment
Give feedback Cancel reply
Lunar
calendar 2021
January February March April May June July August September October November December
Recommended entries
Cattle meat yield
Bicillin for cows
Nicknames of bulls
Compound feed for calves and cows