A cow has a wart-like growth on the eyes: causes and treatment

A growth that has appeared in front of a cow does not bode well. Such formations in appearance resemble cauliflower. In fact, the cause of the appearance of such warts is the bovine papillomavirus. 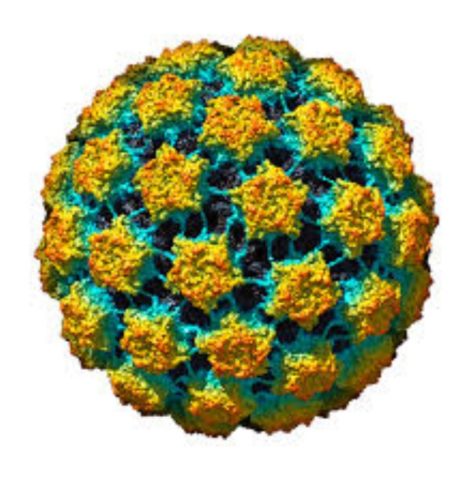 Causes of growths and bumps in the eyes of cattle

Among several hundred types of papillomaviruses, 7 are specific for cows. And only one of them affects exclusively the skin. Other types can form growths on the udder and cause benign tumors in animal tissues. Three types of cancer provoke gastrointestinal tract and bladder cancer. But the growths on the scalp are mainly "merit" of the BPV-3 virus strain.

The disease is transmitted very easily. Slight damage to the skin is sufficient. Usually the first bump grows where the virus enters the skin. The calf can be infected from the mother while sucking milk.

The growths in the area of ​​the head and neck appear due to the combing of the hide by the cows on the fence of the corrals. There is also an opinion that cattle often become infected with papillomatosis during a watering hole in a lake overgrown with reeds. This can occur due to micro-cuts in the thin skin on the lips and sclera of the eyes by plant leaves. The causative agent of the disease is well preserved in the external environment. Since the incubation period is 2 months, usually the whole herd has time to become infected with papillomatosis. 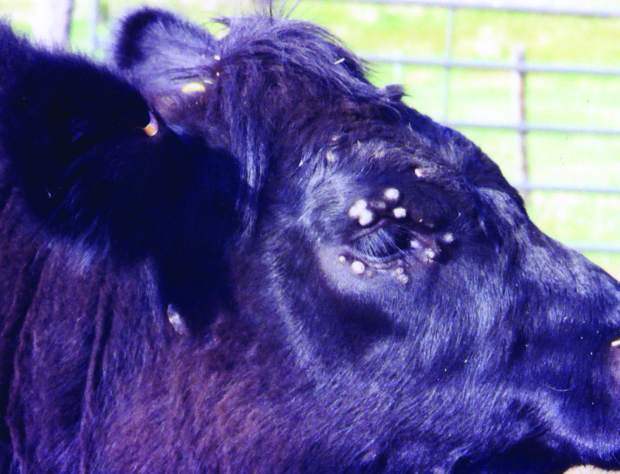 Often papillomas appear first on the eyelids due to the fact that cows scratch their eyes, trying to get rid of flies

The build-up does not necessarily appear on all cows. The ways of penetration of the virus into the body are known, but it has not yet been clarified why and how papillomas appear.

Mostly young animals up to 2 years old suffer from papillomatosis. So the appearance of growths can be associated with the still fragile immunity of the calves. In addition, livestock kept in unsanitary conditions are more likely to get sick.

It is believed that with cutaneous growths, the virus is concentrated in the wart itself and is not spread by the blood. But the appearance of bumps in different places of the cow's body indicates the spread of the causative agent of papillomatosis with the bloodstream. He can settle in the tissues "necessary" for him, rapidly giving new formations.

The duration of the growth of skin formations is about a year. After that, the mature growth disappears, although the virus remains in the body. There is another way of developing papillomas. They appear one after another until the body develops resistance to the virus. Because of this diversity and the relative self-healing of livestock, there is ongoing debate about how to treat the virus. And about whether it needs to be treated at all. 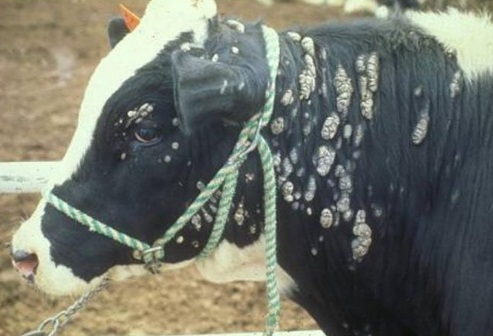 Warts can be found not only on the head and eyes, but also on the neck, back, sides and chest.

The growths caused by the papillomavirus exist in 2 types: a bunch of small rods attached to a thin stem, semicircular formations, the surface of which looks like a head of cauliflower. Skin growths in a cow belong to the second type.

The surface of these buds is usually light to dark gray in color. Normally they should be dry. If papillomas bleed or ooze with blood, this means that a cow has damaged them somewhere.

Treatment of a build-up in front of a cow

In most cases, treatment for warts involves removing them.Experts differ only in the methods and time for cutting out the growths.

Veterinarians at the University of Georgia believe that papillomas should be removed as soon as they appear. And repeat the procedures until the buds stop growing. That is, the cow will develop immunity. True, the removal of growths in the eyes can be difficult due to the location of papillomas on delicate eyelids.

In the veterinary textbook of the publishing house "Merck and K" it is recommended to wait until the growths reach their maximum size or even begin to decrease. According to the author of this textbook, the wart can be removed only after the completion of its development cycle. This theory is well founded. Practice shows that the removal of an immature build-up can cause rapid growth of the following.

The most dangerous bumps in cows are in the eyes, as, growing too large, they can damage the cornea. And papillomas will appear again in these places. Animals scratch their eyes, damaging the skin of the warts and provoking the growth of education.

Attention! One of the nuances of papillomatosis treatment is that you cannot use immunostimulants.

If the cow has already become infected with papillomavirus, the stimulation of the immune system will cause the rapid growth of warts. It is difficult to explain what this is connected with, since the owners of the affected animals established this fact empirically.

For the treatment of already existing growths, a vaccine based on the BPV-4 E7 or BPV-2 L2 strains is used. It causes early regression of warts and their rejection by the body.

Animals in which warts have taken up too much body area are recommended to be sent for slaughter.

Traditionally, preventive measures include compliance with veterinary and sanitary rules when keeping cows. Practice shows that this does not work well.

A more effective remedy is a preventive vaccine. It is used only on cows that do not yet have growths. The veterinarian can make the drug on the spot. The tool is a suspension of papilloma tissues. The virus is killed by the addition of formalin. A vaccine is effective if it is used against the same type of virus. This explains the need to manufacture it in "handicraft" conditions. The growth must be taken from a cow from a herd scheduled for vaccination.

Attention! Calves need to be vaccinated as early as 4-6 weeks of age. 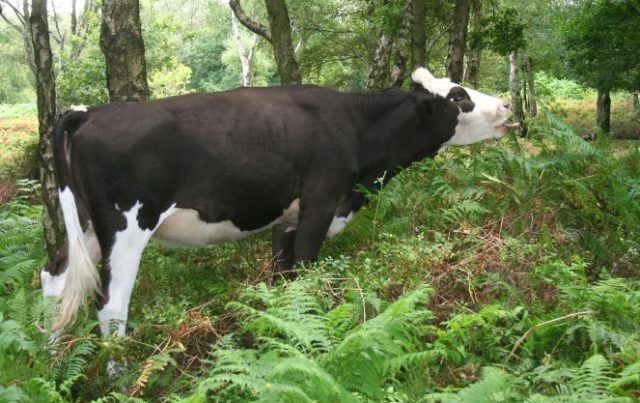 Cows that feed on bracken ferns are at risk for papillomavirus-related cancers, but growths are not affected.

If a build-up is small in front of the cow and does not interfere with her life, it is better not to touch the wart. Removing or attempting to burn with "folk" means can damage the eyeball. It is necessary to remove papillomas only when they reduce the quality of life of animals, affect other important organs and cause discomfort.