Why does a calf gnaw boards

The calf usually doesn’t gnaw boards out of pampering or boredom. He may well find himself other entertainment. For example, pushing through the fence with your forehead. And not boring, and cutting horns can be scratched.

Why does a calf gnaw boards

Unfortunately, it is much more common for calves to gnaw boards due to perverted appetite. The latter occurs with a lack of certain vitamins or minerals. It happens that this is how animals try to drown out hunger. But not because the owner decided to teach them not to eat and thus save on feed. If the calf is kept under the uterus, it may not have enough milk if the cow is low-yielding or has mastitis.

But more often the causes are in diseases:

These are the main three reasons why calves begin to gnaw boards. And not only them. Perversion of appetite involves eating many inedible items.

It occurs when there is a lack of cobalt in the soil and is an endemic disease. Calves are most sensitive to hypocobaltose. Signs of cobalt deficiency are more often recorded in the spring-winter stall period.

It develops in areas with sandy, podzolic and peat-boggy soils with a cobalt content of less than 2 mg / kg. In grass and hay, it is about 0.6 mg / kg.

Trying to make up for the lack of cobalt, calves begin to gnaw boards, bark, wood and bones. Lick walls and other animals. They eat dry grass and earth.

However, if a calf licks walls or chews on wooden structures, it is generally accepted that it does not have enough calcium to grow. Because of this mistake, instead of cobalt salts, the calf is given calcium supplements and aggravates the course of the disease.

For treatment, cobalt chloride and sulfate are prescribed at the rate of 10-20 mg per day. They are given in dressings, premixes and tablets. You can purchase a composition enriched with salts of this metal. Cobalt-rich feeds are introduced into the diet:

In the case of a neglected illness and signs of anemia, injections of vitamin B₁₂ are prescribed. Prevention is very simple: the calves are provided with the necessary feeding.

Attention! An overdose of cobalt is more dangerous than a lack of it.

With an excess, structural and functional changes occur in the mucous membrane of the eyes, in the gastrointestinal tract, lungs and circulatory system. 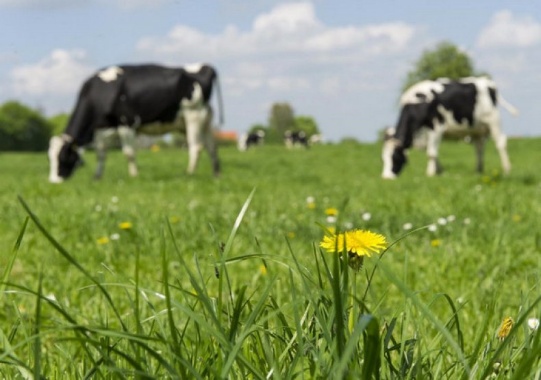 With a good knowledge of botany, an approximate set of substances in the soil can be determined by the composition of plants in the pasture

It develops in areas with acidic peat-boggy soils, poor in copper. The most susceptible are calves, lambs and kids. Copper deficiency occurs when its content in the soil is less than 15 mg / kg, and in feed below 5 mg / kg.

That is, in this case, the calf begins to gnaw the boards not because of hunger.

The diagnosis is made on the basis of laboratory tests of soil, feed and blood.For medicinal purposes, the calves are fed with copper sulfate in the amount of 50-150 mg per day.

Other items are recommended. Better in premixes. As a preventive measure, the diet is balanced in terms of copper content at the rate of 8-10 mg / kg of dry matter. If there is a chronic lack of copper in the feed, for prophylaxis the calves are given 5-15 mg of sulfate per day. When growing forage, copper-containing fertilizers are added to the soil.

In fact, the only disease in which calves actually gnaw walls, boards, logs, etc. from hunger. The latter serves as a trigger. Young animals try to fill their stomachs by licking nearby animals. The tongue of cows is rough, wool clings to it. The calf is unable to spit it out and is forced to swallow. Over time, hairballs form in his stomach. The process is accelerated if calving occurs at the time of molting.

If the balls do not create a mechanical blockage of the intestine, bezoar disease is asymptomatic. The only indirect sign is an attempt to gnaw on inedible objects.

There is no drug treatment. As a preventive measure, calves are additionally fed with milk and mineral supplements and vitamins are introduced into the diet.

What to do if a calf chews on boards

Sometimes the advice to upholster the boards with iron, to stuff nails into them, to spread them with tar, etc., does not solve the problem. They disguise her. If the perversion of appetite is caused by a lack of any elements in the feed, first of all find out what is missing. To do this, donate blood for biochemical analysis.

Do not ignore and feed. It is also advisable to check hay and compound feed as the basis of the diet for the presence of all the necessary substances. Since hay usually comes from nearby areas, the lack of some elements in the grass is constant. Quite often, local residents know about this and can even suggest folk ways of struggle.

After receiving the results of the analysis, the diet is balanced according to the missing elements. This is usually done using mineral and vitamin premixes. Fortified salt licks are also available. You can pick up salt with the necessary additives. Only fashion is not worth chasing. Himalayan salt does not mean miraculous healing.

If a bezoar disease is suspected, the productivity of the uterus is checked. If the cow is low-yielding, the calf is fed additionally. In order not to write off the problem as boredom, they let him out for the whole day for a walk, and put hay at night. Of course, provided that the calf is already large enough to consume roughage. If it's really a matter of finding entertainment, then he won't be up to the boards.

But you can arrange for a cow baby and a toy: a slow feeder. Throughout the day, the calf will amuse itself by pulling small bundles of hay out of it.

If the calf chews the boards, the first thing to check is the milk yield of the queen cow. This is the easiest and fastest way. Then they donate the blood of animals for biochemistry and, according to the results of the analysis, adjust the diet.