One of the undeservedly forgotten, dwindling domestic cattle breeds is the Krasnogorbatovskaya cow. This breed was bred in the 19th century in the Nizhny Novgorod province by crossing the local livestock with imported Tyrolean cattle, which were distinguished by a high fat content of milk. This was the main goal of breeding the Krasnogorbatov breed of cows: to get animals that give milk with a high percentage of fat.

When breeding animals to the tribe, they were selected not only for their productive characteristics, but also for their color. Only red-colored cows were left for the tribe. The tribal group was registered as a breed in 1926.

Description of the Krasnogorbatovskaya breed of cows


In all its characteristics, including size and unpretentiousness, the Krasnogorbatovskaya breed of cows could replace the increasingly popular and very expensive one in the Russian climate. jersey cow... Except for the suit.

All cows of this breed are red in color ranging from brown to cherry brown. The growth of the Krasnogorbatovsky cattle is 120 - 125 cm. The body length is 145 - 155 cm. The elongation index is 121. 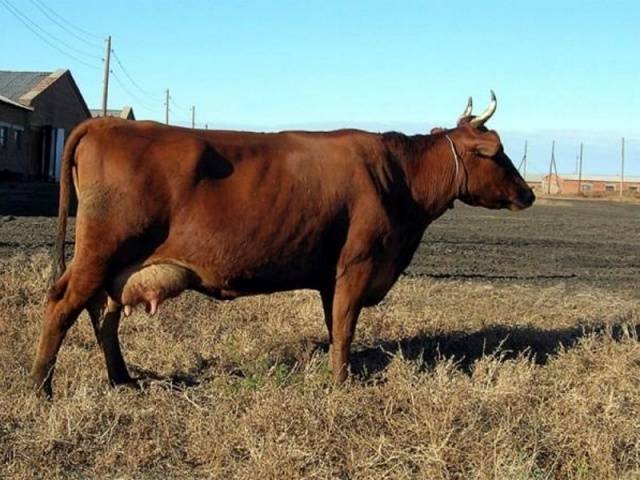 The exterior generally matches that of the dairy cattle. Krasnogorbatovskiy - animals of a strong constitution. The head is light, short. The nasal mirror is light. The horns are light gray, the tips are dark.

Warning! Quite often, the Krasnogobatovsky cattle have an incorrect direction of growth of one or both horns. If there is a threat of ingrown horns into the skull, the horn must be filed periodically. 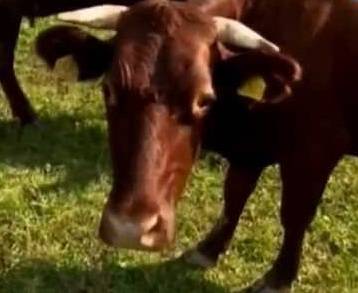 The neck is short, of medium width. The chest is deep and wide. The girth is 181 cm. The topline is almost straight, similar to the topline of the best dairy breeds. But it still has differences in the area of ​​the withers and sacral region. Wide back and loin. The sacrum is slightly raised, of the correct shape. The legs are short. The color is brown, traditionally called red.

On a note! The color of bulls is darker than that of cows. Sometimes the bull can look almost black.


Among the shortcomings common in the red Gorbatovskaya breed are the following:

In addition, dairy cows are not suitable for obtaining meat from them, as they have poorly developed muscles.

Productive characteristics of the breed


When breeding the breed, they tried to improve not only milk, but also meat productivity. Therefore, the bulls of the red Gorbatovskaya breed are distinguished by a relatively large weight in relation to the size of the body and developed muscles. 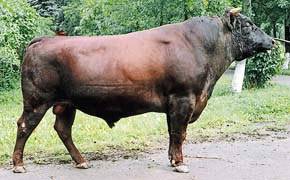 At 4 years old, a breeding bull must weigh at least 900 kg. By the age of 2, gobies gain weight about 700 kg. At the same time, the weight of an adult cow does not exceed 650 kg, ranging from 400 for the least quality representatives of Krasnogorbatovskaya, to 650 in breeding farms engaged in breeding this cattle. As a result of selection, the slaughter yield of meat from bovine carcasses was raised to 60%.

On a note! A milk cow is never fat.

In a cow, all the nutrients it consumes goes to milk production, so there is practically no muscle mass in cows. 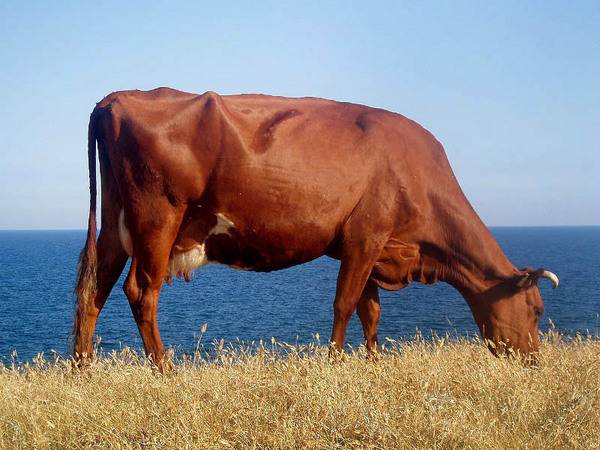 Milk productivity of Krasnaya Gorbatovskaya: an annual yield of 2.7-4 tons of milk with a fat content of at least 4.1-4.5%. Individual record holders in breeding farms can produce up to 8 tons per year. The fat content of milk can also reach 6%.

Pros and cons of Krasnaya Gorbatovskaya


The features for which private owners appreciate this breed are good adaptation to various climatic conditions, poor susceptibility to diseases and unpretentiousness to feed. Krasnogorbatovsky cattle rarely get sick with “traditional diseases like brucellosis, tuberculosis or leukemia. Cows have a rather calm disposition.

On a note! The peculiarity of the character of the Krasnogorbatov cattle is in some willfulness.

Without trying to fight a person, the animal just does what it sees fit.

Cons relate to industrial milk production. Often the udder of Krasnogorbatov cows is not suitable for the use of a machine milking machine. Also, these cattle show low milk yield compared to modern breeds bred exclusively for milk production.

Due to the development of industrial production, the number of Krasnogorbatov cattle in Russia is decreasing. This breed is still popular in the region of its origin - the Nizhny Novgorod region. Some of these livestock are bred throughout Central Russia and Ukraine.

Reviews of the owners of Krasnogorbatov cows


Oksana Starodubtseva, village Mulino
Krasnaya Gorbatovskaya - primordially ours, Nizhny Novgorod cattle. I believe that if some breed was bred in a certain area, then nothing could be better than it. Of course, within the launch area. Since pre-revolutionary times, peasants kept Gorbatov's red cows. These are cattle, perfectly adapted to our conditions and giving good fat milk. The property of this breed to eat even not very suitable plants allows grazing livestock in the wild from early spring to late autumn, when the grass is already withered and poorly nutritious.
Vladimir Ganik, from. Kovchin
Although the breed was not bred in our country, it also suited well for our area. We have very few Krasnogorbatov cattle, although you can find many cows of the same color. But they are either of a different breed, or, in general, outbred. I like the red Gorbatovskys for their high fat content of milk. Milk yield for private farming is also quite satisfactory. 2 buckets a day of yellow milk from cream suits both me and my regular customers.


Due to low milk production and low-quality udders, Krasnogorbatovsky cattle are not suitable for breeding on industrial dairy farms. But for a private trader, this cow is one of the most suitable options due to its unpretentiousness and high fat content of milk. The inability of this breed to machine milking does not play any role when keeping one or two animals in the backyard.

Recommended entries
Kostroma breed of cows: features of the content
Traumatic pericarditis in animals: signs and treatment
Udder mastitis in a cow: what it looks like, what happens, how to cure
Factors affecting the milk production of cattle
Udder gangrene
How long can you milk a cow after calving
What to do if a cow is diarrhea
Lice in cattle
Milking machine cleaner
Give feedback Cancel reply
Lunar
calendar 2021
January February March April May June July August September October November December
Recommended entries
Cattle meat yield
Bicillin for cows
Nicknames of bulls
Compound feed for calves and cows