The cow fell to its feet and does not get up: why and how to raise

The situation when the cow has fallen to its feet and cannot get up is often encountered when keeping cattle and invariably plunges the owner of the animal into panic. And there is something. Cattle are less suited to lying down than horses or elephants. But cows are also large "animals". When lying down for a long time, the weight of the body presses on the internal organs. As a result, emphysema and pathology of the kidneys, liver and gastrointestinal tract develop. If the animal is not raised quickly, it dies. There are not many reasons why a cow falls to its feet, and most of them are related to impaired metabolism.

Why the cow doesn’t stand up

The anatomy of cattle is such that when rising from a prone position, he first straightens his hind legs and only then his front legs. If the animal cannot lift the hindquarters, it remains lying down. Usually, when a cow's hind legs fail, owners first assume postpartum paresis. In most cases, they are right, but sometimes a cow can fall to her feet long before calving or several months after it. Sometimes even young bulls taken for fattening have legs starting to fail. Here it is impossible to write off the calving in any way.

Besides paresis, metabolic disorders, the most common reason is that cows develop problems with ODA. An animal can fall to its feet as a result of development:

In poor conditions, many cows can fall to their feet due to joint inflammation or hoof problems. If the imbalance in the diet does not always depend on the owner, then the content is entirely on his conscience.

In case of metabolic disorders, the lack of one element causes a chain reaction in the body. A cow cannot fall to her feet simply with vitamin E deficiency or a lack of selenium. But this entails the development of white muscle disease, as a result of which the muscles of animals refuse to work.

Comment! It is the lack of vitamins and minerals that is the most common cause of falling to feet in very young cows.

If a calf develops rickets with a lack of vitamin D, then an adult cow develops osteomalacia. The latter can also be only a symptom of hypophosphatasia - a genetic disease.

A cow, along with milk, gives off a lot of calcium. She "takes" it from her own bones. Even if the owner tries to replenish this element for his nurse, the calcium content still decreases with age. The lack of metal in bones leads to changes. And a sign of age-related lack of calcium - the cow begins to get up badly on its hind legs. Over time, the problem gets worse, and the animal can no longer stand at all.

Of the more exotic reasons why a cow does not stand on its hind legs, one can single out the pressure of the fetus on the nerves in the sacrum. With a deep pregnancy, the fetus in the uterus can press on the sacrum of a lying cow from the inside.

Calves can fall when they are abruptly switched from a dairy diet to roughage. In this case, the book becomes clogged with grain, and sometimes earth when the animal tries to eat grass. Often this happens in bulls taken for fattening, which are bought at the age of 2-3 months. Since their gastrointestinal tract is not yet developed, the calf is not able to assimilate grain. Clogging the book causes pain and the desire to lie down. Further, the calf weakens and dies.

The most rare cases of leg problems in cows are unkempt hooves. Even the townspeople, almost everyone knows that horses need to be shod and watched over their hooves. But for cows and small livestock, this moment is very poorly covered. However, hooves should be monitored for them too. Cows also need to be pruned every 3 months. Otherwise, the overgrown hoof wall may wrap inward and begin to press on the sole. If a stone falls between them, it will lead to lameness, very similar in signs to osteomalacia. Since hitching is very painful, the cow gets up badly and reluctantly to her feet, preferring to lie down. 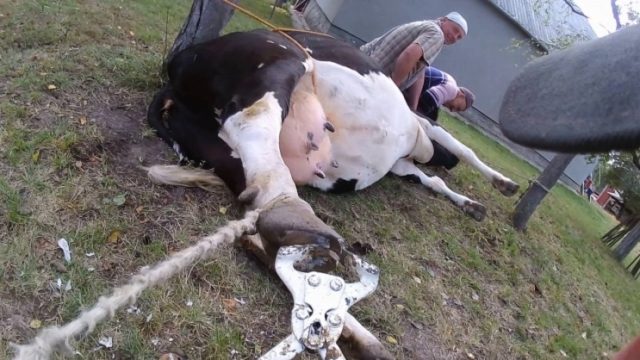 Sometimes the reason the cow fell to her feet is due to neglect of hoof care.

It is a metabolic disease that affects young animals up to 3 months of age. It arises as a result of a lack of a whole complex of elements, but the leading link is a deficiency of vitamin E and selenium. The disease develops gradually, and the lifetime diagnosis is always tentative.

Since the calf weakens slowly, the owner may be oblivious to the animal's discomfort. The owner catches himself only after the young have already fallen to their feet. At this stage, treatment is useless and the calves are sent to slaughter.

In the early stages of the disease, animals are provided with high-quality feed with a large amount of vitamins, and the missing elements are injected.

Comment! What exactly is lacking in the "standard" diet is determined in the laboratory using a chemical analysis.

Vitamin E is administered intramuscularly. A course of 4 days 1-2 times a day. For the next 5 days, they inject every other day at the rate of 3-5 mg / kg of weight. Then - once a week at the same dose as the previous course.

A cow can fall to her feet if there is a lack of phosphorus. But the element itself will not be “to blame” for this. Its lack entails a whole chain of metabolic changes. Livestock can stand on their feet, but prefers to lie, the joints on the limbs increase. The posture changes: the cow crosses the front legs.

Correcting the phosphorus balance in feed with feed phosphates is bad. Only two types of premixes are produced in Russia: defluorinated phosphate and monocalcium phosphate. They are not suitable for dry cows that require a low calcium to phosphorus ratio. These premixes are of little use for ruminants and in other periods of life. Cattle do not have enough hydrochloric acid in their stomach to extract phosphorus from calcium feed phosphates. 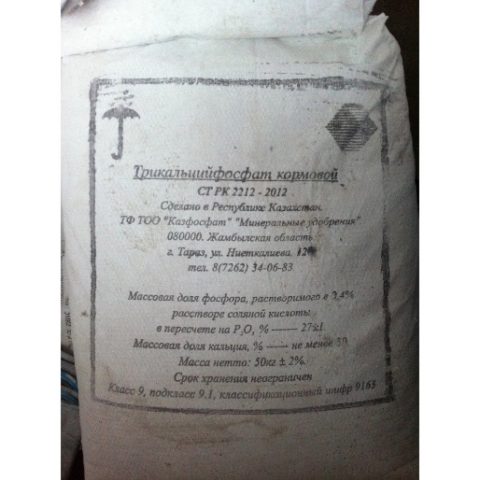 You can search for tricalcium phosphate for sale in Kazakhstan.

To put it simply, it is protein poisoning. Caused by an excess of protein feed in the diet. In a mild form, a perversion of appetite and signs of intoxication are observed in a cow. With severe oppression, the animals prefer to lie down.

The owner often believes that the cow has fallen to its feet during ketosis, although it is possible to force it to stand up. But if the disease develops after calving, then protein poisoning is often mistaken for postpartum storage or paresis. Treatment carried out with a wrong diagnosis, as expected, does not work. The definition “fell to its feet” in this case means that the animal's hind limbs have not been taken away, and it is simply difficult for it to stand. And when lifting from a prone position, the cow does not have normal support.

The most common disease in young animals is caused by vitamin D deficiency and movement. But in order for the calf to “fall to its feet” during rickets, one must “try hard”. Usually, with this disease, young animals are stunted, and also receive a barrel-shaped chest and crooked limbs.

With rickets, not only bones soften, but also ligaments. As a result, fetlock joints often "sag" very strongly: on the hind limbs they "fall through", and in the front the picture looks like contracture. 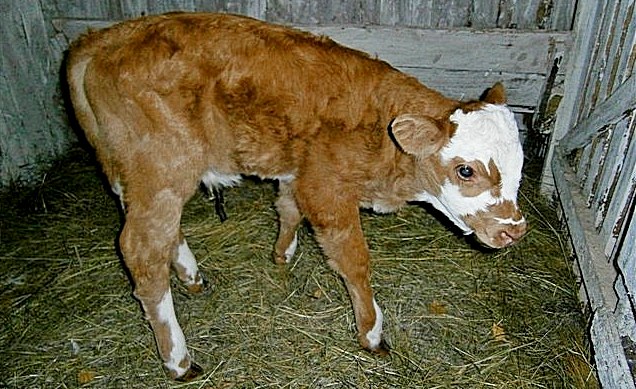 Lack of phosphorus, or rather, its improper ratio with calcium, is the main cause of the development of bone diseases

In part, it can be called an "adult" version of rickets. It also develops with a lack of vitamin D and insufficient exercise. But cows have another reason for the development of this pathology: milk. Dairy cattle release too much calcium from their bones.

With osteomalacia, the volume of bones increases, but their density decreases. Bone tissue becomes soft. The first sign of calcium leaching is softening of the caudal vertebrae. They also lose their shape and ligaments. Gradually, it becomes difficult for a cow to stand and move. Similar signs are observed in older animals, even with a full diet and good housing conditions. Especially among the highly yielding ones.

If an older cow has fallen to her feet, veterinarians usually advise turning her over for meat and not suffering. The average lifespan of dairy cattle is 8 years. This is a price to pay for large milk yields.

Attention! Osteomalacia is not treated.

The process can only be slowed down. That is why there is no point in trying to raise an old cow.

How to get a cow to its feet

Here you will first have to clarify what is meant by the word "raise". Usually cows are not raised, they stand up on their own. After receiving intravenous injections of the necessary drugs. This practice is common in postpartum paresis.

If the cow falls to its feet during prolonged metabolic changes, it is "suspended". The measure is very controversial and temporary. In artisanal conditions, it is very difficult to make a machine for hanging such a large animal. The cloth, even a wide one, presses on the chest, since the cow does not stand, but hangs. The gimbal can be used for 1-2 days or to transport a cow whose legs have failed to pasture. But if the animal does not recover within a couple of days, it will have to be slaughtered. Direct treatment is carried out after the diagnosis is established and with the use of appropriate drugs. 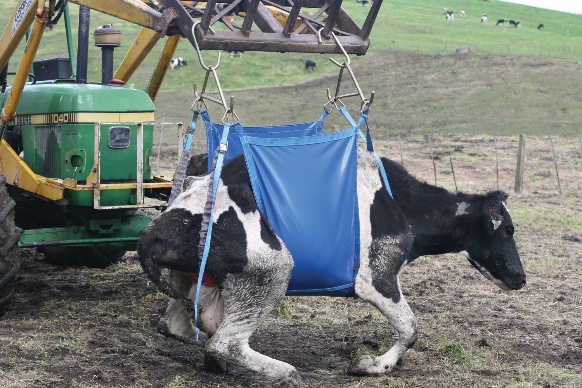 The suspension is good for transporting the cow from the field if she falls to her feet in the pasture, but not for permanent housing

What to do if the goby does not stand up

Most likely to cut. Most often, legs fail in bulls at the age of several months. Since full-fledged mineral premixes are not produced in Russia, it is unlikely that it will be possible to improve the metabolism of the calf. At least, practice shows that after suffering for a week or two, the owner cuts the bull. If he does not have time to fall earlier.

If white muscle disease is suspected, the calf is injected with selenium and vitamin E. But the calf can lie down for other reasons. Therefore, to establish a diagnosis, you need to invite a veterinarian as soon as possible.

If it is not about postpartum paresis or bedding, veterinarians have no special advice. With the gradual development of muscle degradation, you need to revise the diet. The calf should be stopped from feeding grains. An adult cow needs a balanced diet.

Sometimes it doesn't even hurt to check the hooves and joints. Perhaps the cow is afraid to stand because of the pain. The animal can also paralyze if the spine is damaged. And there is no guarantee that it will recover. However, no one can promise that they will definitely die.

If the hope of raising the animal is not yet lost, it is necessary to massage the limbs and sacrum to improve blood circulation. The lying cow is turned over from side to side 2 times a day and rubbed with a jute bag or straw rope.

If the cow does not fall to her feet as a result of a postpartum complication, the treatment process will be long and likely unsuccessful. Often, no one can offer any methods of treatment or prevention, except for changing the regime and diet of feeding and improving conditions of detention.