The cow is walking over the calving date: why and how many days a calf can carry

Cases when the cow has passed the calving date are common. Here we still need to find out what each of the owners means by the word "passed." On average, pregnancy lasts 285 days ± 2 weeks. Hence the question arises, from what moment to consider that the calving period has passed.

Why is the cow overstepping the calving date?

There are many reasons for the delay in calving in cows. And not all of them are joyful:

In most cases, owners believe that if a cow goes over the calving date, she will have twins. In fact, cattle belongs to the group of singleton animals, like horses. Twins are born only in 1-2% of cases. And this is usually a very undesirable phenomenon. In the case of fertilization of two eggs at once, there is a high risk of miscarriage. And the calves born will be weaker than the "single" ones. The fact that the cow has passed the deadline does not mean that there will necessarily be twins. The number of late calving far exceeds the number of twins in cattle.

This spread is explained by the fact that gobies "sit" in the womb for a long time. Males in almost all mammalian species lag behind females in development. Even after birth. Therefore, with an early hotel, you should rather wait for a heifer, and with a late one - a bull. A cow can cross over even if she calves with a large calf. But here, perhaps, it is precisely the delay in calving. The fetus has time to grow. And in this case, cause and effect are confused. The cow did not pass because the fetus is large, and the calf grows large due to late calving. The delay in this case is due to a slight hormonal disruption. The body does not have enough oxytocin to kick start the calving process. Such a failure does not particularly harm the pregnancy, only prolonging it.

Sometimes there is a so-called "overrun". This word has two meanings. One means serious health problems for the cow, the second only indicates that the animal was impregnated later. It's in bed. But the calving time will have to be determined not by calculation, but by external signs. This can happen if there is a bull nearby. The first time the cow did not fertilize and "quietly" from the owners went to the bull in the next hunt. The situation with pathologies is worse. 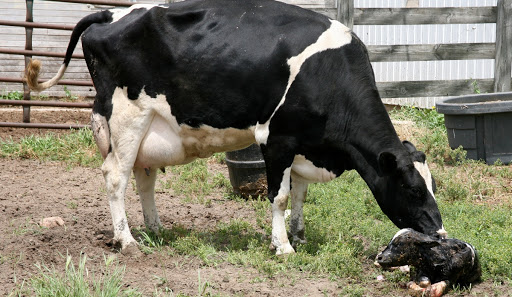 If the cow has passed the deadline, calving may be unexpected for the owner of the animal.

False pregnancy is caused by too high hormonal levels. Outwardly, everything proceeds as if an embryo develops in the womb. Often, even with a rectal examination, it is impossible to determine what the cow has missed. Ultrasound can help here. The development of false pregnancy before "calving" can go according to 3 options:

With a false pregnancy, animals often "give birth" and assign anyone and anything to the role of a cub, up to inanimate objects.

Comment! The development of pyometra can lead to forced slaughter.

Mummification of the fetus develops in the middle of pregnancy. The embryo dies, but since the cervix is ​​closed, putrefactive bacteria cannot get inside. Due to the reduced contractility of the myometrium and the closed neck, the fetus remains in the womb. Gradually, it dries up and mummifies.

When mummified, animals have no signs of hunting, and the owner believes that the cow is pregnant.The problem will "eliminate itself" if the muscles of the uterus begin to contract. But it is in this case that the cow goes over 3 weeks. Mummified embryos always hatch very late. Often it is necessary to remove the fetus artificially after injections of the appropriate hormones. The latter are needed for the cervix to open, and the veterinarian was able to get to the embryo.

Comment! After mummification, infertility often develops, since chronic dystrophic and inflammatory processes occur in the endometrium.

How long can a cow carry a calf

Usually a cow walks for about 10 days. Maximum 26 days. This is just about 260-311 days of gestation. Although according to the experience of livestock breeders, extending the calving period even by 3 weeks is a rarity. Most often no more than 15.

Comment! The statement that the term may come on the 240th day does not correspond to reality: calving at the 8th month is a late miscarriage with an infectious disease. 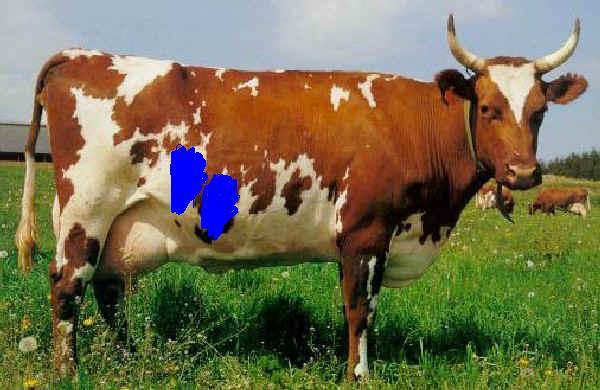 The approximate place of application of efforts during the "push test", if the uterus has passed the terms, so you can determine whether there is a live calf inside

What to do if a cow is overstepping her calving date

Until the deadline expires, you don't have to worry too much. But it is necessary to monitor the course of pregnancy. Late calving is usually difficult due to the fact that the fetus has time to grow over the norm.

If you are in doubt at a later date, you can independently check whether the calf is present and whether it is alive. To do this, the cow is strongly, but not abruptly, pushed into the belly from the bottom right. The cub will immediately be outraged by this treatment and give a return push.

If the cow has already passed 3 weeks, counting from the 285th day, it is better to invite a specialist who can determine the presence of pregnancy. Provided that the "push test" does not produce results. If the calf is pushing, and the udder begins to fill up, it remains only to wait for calving and remember that herbivores can arbitrarily shift the time by a day. This is a defense mechanism. They do not give birth if there is a disturbing factor. In this case, the owner himself may be the cause of such a daily delay.

If the cow has passed the calving date by more than 3 weeks, the owner has cause for concern. Shifting the estimated date by 10 days is a frequent phenomenon, there is nothing to worry about. Animals are not machines to produce offspring strictly on time.

Recommended entries
Cow of the Bestuzhev breed: photo
Diseases of the udder in cows and their treatment
A cow has constipation: what to do
Cow udder injuries: treatment and prevention
Signs of a cow's pregnancy: by month, alternative methods of determination
Fibrinous mastitis in cows: treatment and prevention
Salmonellosis of calves: vaccine against the disease, treatment and prevention
The cow fell to its feet and does not get up: why and how to raise
Caring for a cow after calving
Give feedback Cancel reply
Lunar
calendar 2021
January February March April May June July August September October November December
Recommended entries
Cattle meat yield
Bicillin for cows
Nicknames of bulls
Compound feed for calves and cows