Colostral immunity in calves is often called innate. This is not true. In newborns, immunity is completely absent and is developed only after 36-48 hours. It would be more correct to call it maternal, since the cubs receive protection from infections from the cow. Though not immediately in the womb.

What is colostral immunity in animals

This is the name of the body's defense against infections, which the young receive from the mother's colostrum. Calves are born sterile. Antibodies that protect them from diseases in the postnatal period, they can receive only on the first day of life. The secretion that emerges from the udder in the first 7-10 days is very different from the "mature" milk that a person consumes. In the early days, the cow produces a thicker yellow substance. This liquid is called colostrum. It contains a lot of protein and immunoglobulins, but almost no fat and sugar.

This is the main reason why the calf must suckle the uterus for the first 6 hours. And the sooner the better. Already after 4 hours, the calf will receive 25% less antibodies than immediately after birth. If for some reason the newborn cannot be fed with natural colostrum, colostral resistance will not develop. You can make an artificial substitute with a full complement of amino acids, fats and carbohydrates. But such an artificial product does not contain antibodies and does not help develop protection.

Comment! Colostral immunity protects the baby only during the first month of life, so in the future, you should not neglect routine vaccinations.

It is possible to water the young "by hand" from the first minutes of its life, but the product consumed by the young must be natural

How colostral immunity is formed

The calf is protected from infections by the mother's immunoglobulins in the colostrum. Once in the stomach, they enter the blood without changes. This happens during the first 1-1.5 days of life. After the calf is unable to form colostral resistance to disease.

The formation of the defense system depends on the acid-base state (CBS) of the calves' blood. And this is determined by metabolic changes during the prenatal period and the mother's CBS. In calves with reduced viability, colostral immunity is practically absent, since immunoglobulins poorly penetrate from the underdeveloped gastrointestinal tract into the blood.

For the correct formation of "innate" immunity, the calf must receive colostrum in the amount of 5-12% of its body weight during the first hour, and preferably 30 minutes, of life. The amount of soldered portion depends on the quality of the product and its saturation with immunoglobulins. On average, it is recommended to feed 8-10% of the body weight, that is, 3-4 liters. The second time, colostrum is drunk at the 10-12th hour of life. This is the case if the baby is taken immediately after birth.

This method of feeding calves is practiced on large farms, where it is possible to create supplies from cows with strong immunity. Storage is carried out in a freezer with a temperature of -5 ° C. Usually, containers with a volume of 5 liters are used. Because of this, the defrosting mode is often violated.

With proper defrosting, the container is immersed in warm water at a temperature of 45 ° C. But since the volume is large and everything cannot be thawed at once, the amount of immunoglobulins in the colostrum decreases. This has a negative effect on the formation of colostral resistance of young animals to diseases.

Ideal for calf protection, ideal for small farms and private cow owners. The newborn is left under the mother. In parallel, he is taught to receive food from the nipple. Later, the calf will still have to drink the milk from the bucket.

The disadvantage of this method of forming colostral immunity is one: the uterus may have a low resistance of the organism. Poor quality colostrum can be:

In the second case, it does not matter from which cow the calf will receive its first portion. Immunity will be formed weak. 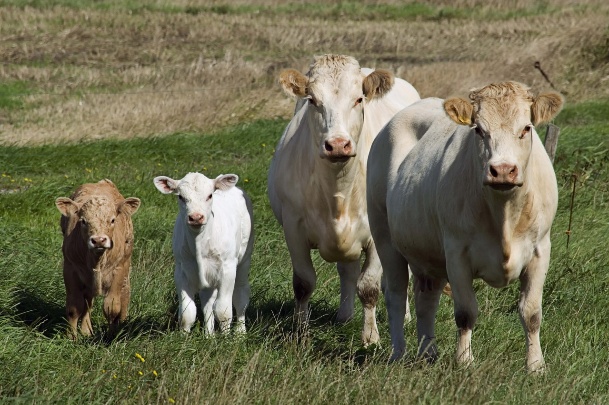 The young animals left under the uterus will have the highest resistance to diseases of the body, this is a common practice when growing beef cattle breeds

A newborn, if possible, should drink colostrum from adult, fully developed cows. First-calf heifers usually do not have a sufficient amount of immunoglobulins in the blood, and the formation of colostral immunity depends on them.

Attention! "Congenital" resistance develops during the first 24 hours of a calf's life, so it is important not to miss the moment of calving.

How to improve colostral immunity in calves

Strictly speaking, it cannot be increased in calves. But you can improve the quality of colostrum and expand the protective functions. The amount of immunoglobulins decreases under certain conditions:

It is possible to "expand" the spectrum of diseases against which the calf will protect colostral immunity by timely vaccinations of the queens. If there is antibodies to a disease in the cow's blood, these immunoglobulins will be passed on to the calf.

Attention! Even the timely feeding of a quality natural product may not work if the calf is under stress.

Stressful situations for newborns include:

Creating a comfortable environment for calves will increase colostral resistance.

There is also a method of "artificial" formation of colostral immunity. The inactivated vaccine is injected into pregnant uterus twice, with an interval of 3 days. The first time a cow is vaccinated 21 days before the expected calving, the second time 17 days before.

If the maternal colostrum is not enough for the formation of strong immunity, another method is used: the introduction of immune sera. The calf develops passive immunity within a few hours. But the duration of action of the serum is only 10-14 days. If the young have not developed colostral resistance, the serum will have to be repeated every 10 days.

Colostral immunity in calves is formed only on the first day of life. At later stages, the uterus still secretes immunoglobulins, but the young are no longer able to assimilate them. Therefore, it is very important to either have a supply of colostrum in the freezer, or to leave the newborn under the cow.