What is the meat yield of pigs (percentage)

The livestock farmer needs to be able to determine the pork yield from live weight in different ways. Its percentage depends on breed, age, feeding. The slaughter weight of the pig helps to pre-calculate the profit of the farm, determine the profitability of production, and adjust the feeding rates. 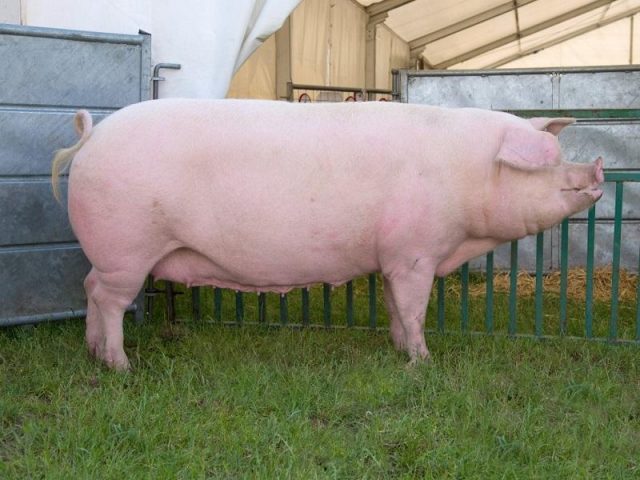 The increase in piglet weight gain depends on the correct formulation of the diet, the quality of the feed, and the season. The mass of the animal increases in the spring, when healthy greens are added to high-calorie feed. The indicator is influenced by the fatness of the pig, which is represented by five categories:

Weight gain largely depends on the diet, the addition of vitamins to the pig's feed, and the conditions of detention. With a balanced and caloric diet, the animal can gain 120 kg by six months. This weight gives a high slaughter yield in pigs. 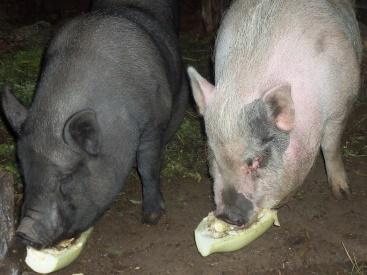 How much does a boar weigh

Adult boars weigh more than pigs. The difference is 100 kg. Average values ​​of different breeds of adult boars (in kg): 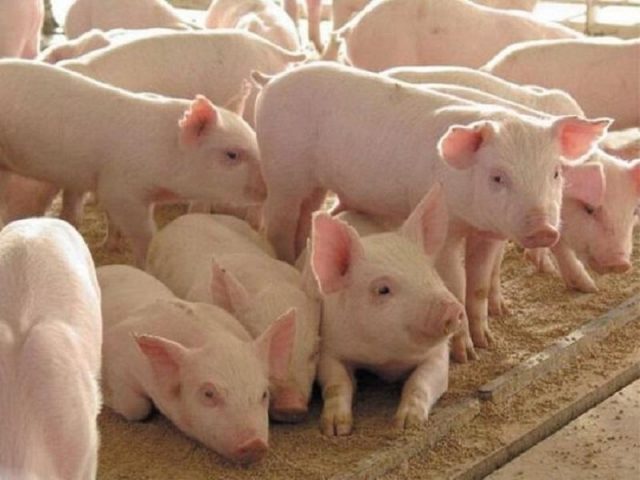 The specific weight of the pig at different ages allows you to adjust the quality and quantity of feedings. For all breeds, there are average indicators of the mass of the animal. So, the Large White piglet is much heavier than the Asian herbivore. Piglet weight, depending on age, is approximate.

The indicator is influenced by the size of the sow's farrowing. The more numerous it is, the easier the pigs are. The first month, the gain depends on the milk yield of the pig. From the second month, the quality of nutrition affects the growth of piglets.

Concentrated feed promotes rapid weight gain. A diet based on herbs, vegetables and fruits slows down the rate of gain in pigs. When comparing piglet weights with guideline values, feed information should be considered. Increase in piglet weight gain by month (on average, in kg):

The error in the mass of Landrace, Large White and other breeds not fattened before slaughter for more than six months is 10%.

What determines the lethal output

After the slaughter of the animal, part of the weight is lost due to evisceration of the carcass, release of blood, separation of the legs, skin, head. The percentage of pork meat yield from live weight is called slaughter yield. The indicator is influenced by the type of animal, breed characteristics, age, fatness, gender. It is widely used to assess the quality of livestock. The yield of pork from a carcass depends critically on the accuracy of measuring live weight. If it is incorrectly determined, the error reaches large values.

So, the weight of a pig carcass fluctuates, depending on the weighing time. When paired, it is 2 - 3% heavier than chilled. The body tissues of a young animal contain more moisture than an adult, therefore, the loss of kilograms after slaughter in the first case is more significant.

The change in mass is higher for oily carcasses than for lean carcasses.

The product yield is influenced by: 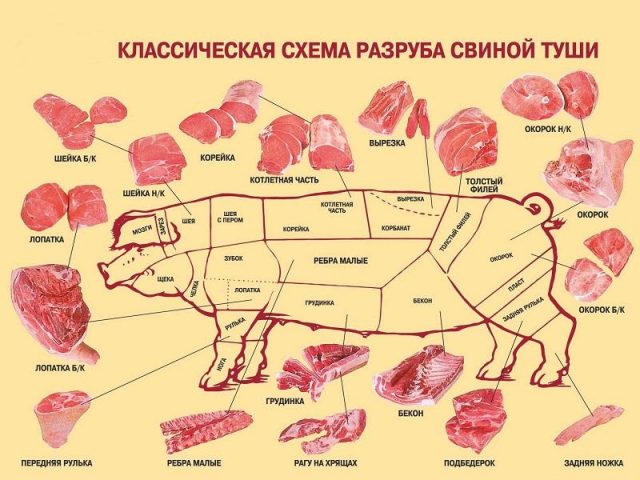 Slaughter yield in pigs is 70 - 80%. It is equal to the ratio of the mass of the carcass to live, expressed as a percentage. Slaughter weight of pigs includes carcass with head, skin, fat, legs, bristles and internal organs, excluding kidneys and kidney fat.

Judging by the indicator, raising pigs is more profitable than cattle and sheep. The yield of products, in comparison with other animals, is 25% higher. This is possible due to the low bone content. In cattle, there are 2.5 times more of them than in pigs.

Slaughter yield in farmed animals is:

How much does a pork carcass weigh?

In a pig, the yield of meat, lard, by-products depends on the breed, age, weight of the animal itself.

All bred breeds are divided into three groups:

When the live weight of a pig reaches one hundred or more kilograms, the slaughter yield is 70 - 80%. The composition, in addition to meat, includes about 10 kg of bones, 3 kg of waste, 25 kg of fat.

The mass of liverworm products depends on the age of the pig, its breed, size. For a carcass of 100 kg, it is (in kg):

The percentage of viscera in relation to the total slaughter yield is:

What is the percentage of meat in a pig

Deboning is the processing of carcasses and quarters, in which muscle, adipose, and connective tissues are separated from the bones. After it, there is practically no meat on the bones.

On different parts of the half carcasses, the output of pork meat after deboning is of different quality. This is the peculiarity of the procedure. So, when deboning the brisket, back, shoulder blades, meat of lower grades is cut off than from other parts. This is due to the large number of veins and cartilage. The zhilovka provides, in addition to further cleaning, the final sorting of pork. It is divided into muscle groups, cut longitudinally into kilogram pieces, and the connective tissue is separated from them.

When the carcass after slaughter is taken as one hundred percent, the yield rates for deboning pork are:

How much pure meat is in a pig

Pork has been divided into five categories: 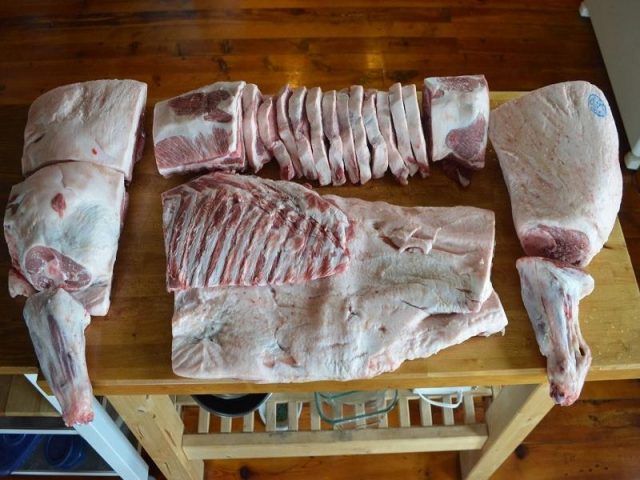 Fourth, fifth categories: pork, frozen several times, products obtained from boars are not allowed for sale. The output of pork cuts to carcass weight is 96%.

The output from a pig of meat, lard and other components with a live weight of 100 kg is (in kg):

How much meat is in a pig weighing 100 kg

When pigs that have gained 100 kg are slaughtered, the yield is 75%. Carcasses with a high percentage of bacon are obtained from fattening hybrids of three breeds: Landrace, Duroc, Large White. Bacon meat is rich in muscle tissue, thin lard. It ripens on the 5-7th day after slaughter, when its nutritional value becomes maximum, and its properties are optimal for further processing. After 10 - 14 days it is the most tender and juicy. The average weight of half carcasses is 39 kg, fat has a thickness of 1.5 - 3 cm. Percentage of pure meat yield from a pig carcass:

The yield of pork meat from live weight is quite high - 70 - 80%. There is little waste after cutting, so the pig is beneficial for obtaining meat. Thanks to the multitude of bred breeds, it is possible to select individuals for breeding, unique in their properties, meeting the market requirements and customer requests. When raising pigs, it is worth constantly monitoring the weight gain and, if necessary, adjusting this with feed.

Recommended entries
Pig breeds with photos and names
Pietrain - a breed of pigs: characteristics, reviews
Pig erysipelas
The shank is what part of the pig (pork carcass)
Do-it-yourself castration of pigs (pigs)
Pig sacrum
Pasteurellosis of pigs: symptoms and treatment, photo
How to cut a pig's head: step by step instructions
BMVD for pigs
Give feedback Cancel reply
Lunar
calendar 2021
January February March April May June July August September October November December
Recommended entries
Pig diseases
Pig erysipelas
How to get a pig out of a hunt and what needs to be done to make a pig come into a hunt
Hungarian downy mangalitsa: reviews + photos