How to cure cracked cow udders

Cracks in the udder of a cow is a common pathology in cattle. They cause pain to the animal, are favorable areas for the accumulation and reproduction of pathogenic microorganisms. Therefore, therapeutic measures must be carried out without fail and as soon as possible, so as not to provoke the development of complications.

Causes of cracks in the udder of a cow

If during milking the cow begins to behave restlessly, does not allow the milkmaid to touch the udder, beats with her limbs - these are signs of cracks. When they appear, it is important to determine the causes of such a pathology as soon as possible.

Visually, the milkmaid can see cracks, wounds of different sizes. Most of them are located on the nipples. They can be longitudinal and transverse, single or multiple, with a red bottom and slightly thickened edges. Cracks in the udder and teats sometimes bleed as the epidermal layer is torn. With poor care, the mammary gland becomes covered with dirt and crust.

Important! Since any touch of the udder causes severe pain for the cow, the calf should not be temporarily allowed to approach her so as not to cause additional suffering.

The main reasons for the appearance of cracks on the organ:

Sometimes the cause of the pathology is a decrease in the elasticity of the skin of the mammary gland. This can also serve as the reason for the appearance of cracks and crusts.

Why are udder cracks dangerous?

The mammary gland of cattle is a glandular organ. Consists of 4 lobes that end on the nipples. It fits quite tightly to the lower wall and is held in place by the ligament and fascia. The organ is represented by glandular tissue, excretory ducts, connective tissue, nerve endings, lymphatic and blood vessels. 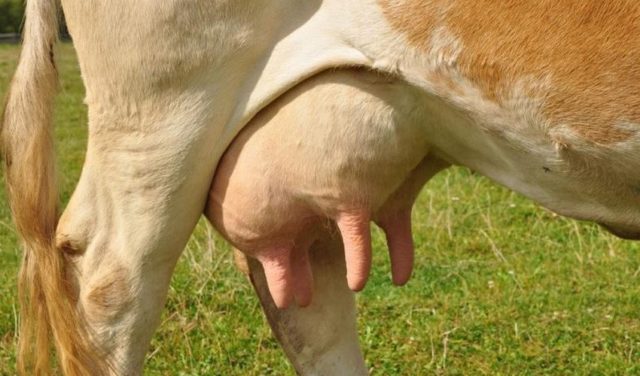 Thus, the udder of a cow is a very delicate organ that requires careful handling. Even a minor wound, crack in the udder or teat can lead to unpleasant consequences for the animal and for the owner.

Already in the early stages of the development of the disease, the cow experiences pain during milking and during hygiene procedures. Every touch of the udder is stressful for a cow. This affects the overall health of the animal and milk flow. Milk is not completely milked, which leads to the development of mastitis, an inflammatory disease of the mammary glands.

If the owner does not take any measures, then suppuration forms on the gland under a crust of dirt and blood, which leads to the development of infectious diseases of the udder, for example, phlegmon - an acute purulent inflammatory process of loose connective tissue of the udder.

Cracks, like udder and teat diseases, cause economic damage to dairy cow owners. Milk becomes either unfit for consumption, or its quantity is significantly reduced.

How to heal a cracked cow's udder

If the situation has not yet been started, there are no complications, then the treatment of cracks will be quite simple, not costly, and the prognosis is favorable.

The entire affected area should be well washed, cleaned of contamination with warm water. You can use a baking soda solution for this procedure. Then you need to carefully dry the skin of the gland with a clean towel.After that, you should apply a room temperature streptocide ointment or another disinfectant. 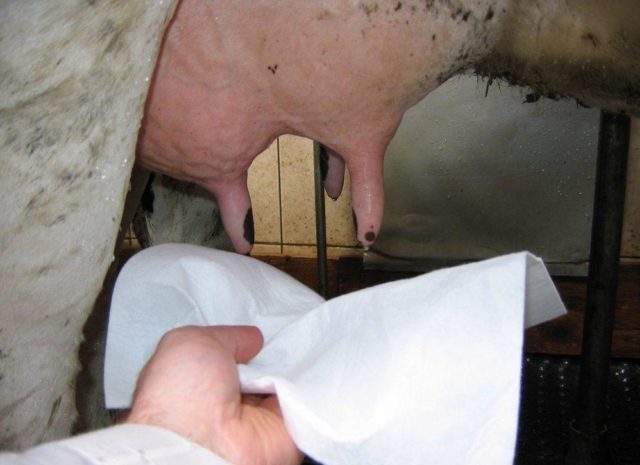 Attention! 15 minutes before the start of the milking procedure, with severe pain, you can treat the nipples with novocaine ointment. This will reduce pain and the cow will be much calmer during milking.

Each time after milking, the teats should be treated with a warm soda solution. Then lubricate with petroleum jelly or a special ointment for nipple treatment.

It is also recommended to transfer the cow to manual milking for the period of treatment or to use a milking machine in a gentle mode.

From folk remedies, cabbage leaves or leaves of mother-and-stepmother are often used, wrapping them around the gland and bandaging with gauze. Rice starch is also diluted to a thick sour cream and coated with the affected area.

Prevention should consist in careful care of the cow's udder:

The massage significantly enhances blood circulation, promotes the formation of milk and its complete milking, makes the skin soft and elastic. It needs to be done right. First, the right half of the cow's mammary gland is massaged, while placing the right hand on the front quarter of the organ, the left hand on the back quarter. Thumbs should be facing each other. The udder should be gently raised and lowered by stroking from top to bottom. Massaging the left half of the gland, the thumbs should be turned in the opposite direction. After finishing the massage, you can start the milking process.

The cow should be milked while sitting on a bench on the right side of the animal, the tail should be immediately tied to the limb. The most correct milking technique is with a fist. So the milk is completely milked out and does not cause pain to the animal. The milkmaid's hands should be clean and dry.

It is important for the owner to understand that the animal needs to be kept clean. The stall should be cleaned daily. The litter should only be dry and clean.

Cracks in the udder of a cow are the result of improper actions on the part of the owner, staff, or, conversely, their complete inaction. Fortunately, cracks do not require special treatment; even an inexperienced farmer can bring the animal's health back to normal. However, if the situation is neglected, breast edema, mastitis, phlegmon, or some other complications begin. Prompt veterinary assistance and proper treatment may be required.