Of all the meat breeds in the world, four are the most popular with pig breeders.

Of these four, it is more often used not in purebred breeding for meat, but for breeding highly productive meat crosses. it pig breed Duroc, bred in the USA.

History of the breed

The origin of the breed is not known for certain. One of the versions points to the Guinean pigs as one of the unconditional progenitors of the Duroc. Another version claims that Columbus brought the Spanish-Portuguese red pigs to America during his second trip. In the third version, it is believed that the brown color of the Duroki acquired from the blood of British Berkshire pigs. Today, Berkshire pigs are black in color, but at the time of the creation of the Duroc pig, there were many brown individuals among the Berkshire.

There were also other "receipts" of red pigs to the United States. In 1837, the owner of a Kentucky farm brought four red pigs from Spain. In 1852, several of the same pigs were brought to Massachusetts, but the owner soon died and his inheritance was sold to several other states.

Modern pigs of the Duroc breed are believed to be descended from two lines of meat pigs: a red pig, bred in New Jersey, and a pig called "red Duroc", bred in New York (not the city, but the state). The newly introduced cross was even called Jersey at first.

Comment! The Duroc breed got its name in honor of the famous trotting stallion named Duroc in the circles of that time.

The ancestor of the red New York Durocs was born in 1823. The boar has become famous for its smooth and high-quality body no less than its owner's stallion.

Duroc passed on the name to the descendants, already as a breed, color, fast growth, deep body, broad shoulders and powerful hams and a calm disposition. 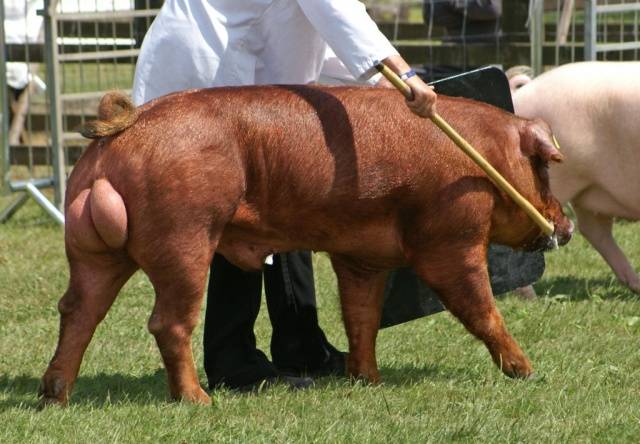 New York durocs were smaller than Jersey reds, with finer bones and better meat quality. Indicators such as fertility, early maturity and longevity in the Durok did not differ from the Jersey line.

As a result of the crossing of these two lines and the additional infusion of blood from Berkshire pigs of red suit, as well as the addition of Tamworth pigs to the breed, the modern breed of Duroc meat pigs was obtained. However, the participation of the Tamworth in the breeding of the Durocs is in doubt even among the Americans, since there is no reliable documentary evidence of this left.

When moving to the west, the settlers also took the Duroks with them. The breed was finally cut in the states of Ohio, Nebraska, Kentucky, Iowa, Illinois and Indiana. Duroc has become the leading pig breed for American farmers.

In addition, his ability to improve other breeds of pigs was later discovered. As a result, today the Durocs are used not so much for the direct production of meat as as a terminal breed when breeding industrial meat crosses of pigs. Boars of the Duroc breed are of particular value in this production.

Description of the breed

The characteristics of the modern breed of Duroc pigs differ from those of the ancestral breeds and early representatives of this breed of pigs.

Modern Durocs are somewhat smaller than their ancestors, since the work on the breed was in the direction of quality and maximum slaughter yield of meat. 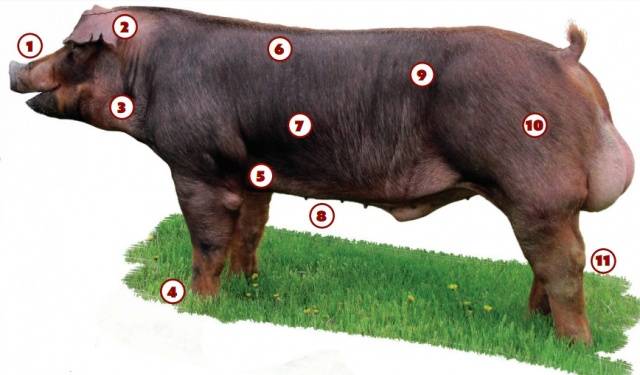 The photo shows an ideal representative of the Duroc breed in the understanding of Western registrars.

Due to the mixing of numerous breeds (it is unlikely that only two lines of pigs took part in the breeding of the breed), the Durok breed is distinguished by a rather large variety of colors. From golden yellow, almost white, to mahogany color. 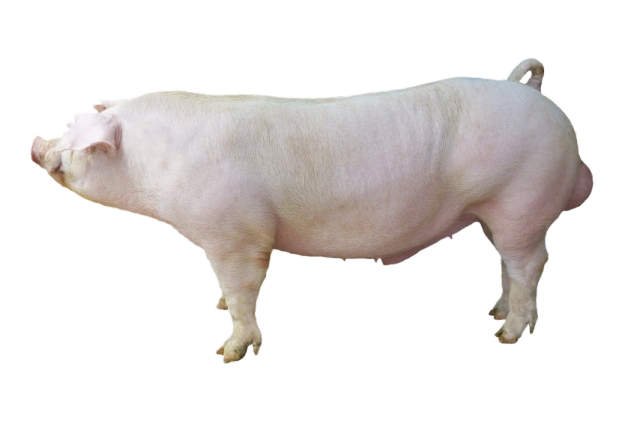 The photo shows a white duroc.

And the opposite border of colors is the darkest duroc. 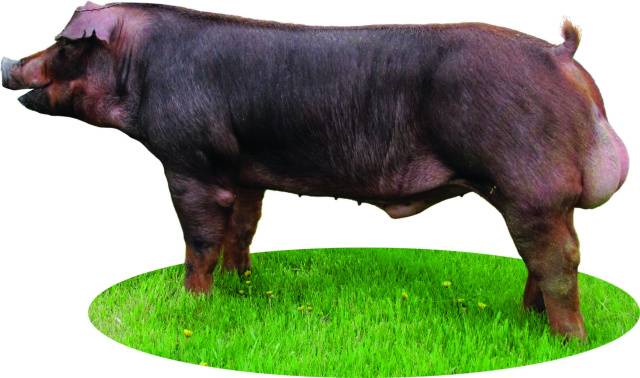 If you are offered a duroc with erect or semi-erect ears, it does not matter what suit it is. At best, this is a crossbred animal.

The modern Duroc is a medium-sized breed. The weight of an adult boar is 400 kg, of a pig - 350 kg. The length of the body of a wild boar can be up to 2 m. pigsty construction it is better to take into account such a nuance immediately, so that later you do not have to rebuild everything. 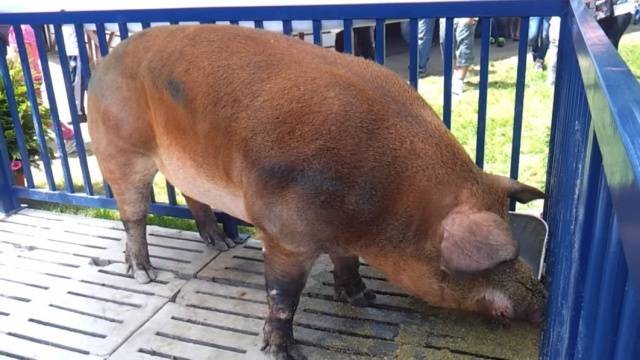 There are boars and larger ones. According to the author of the video, the exhibition features a wild boar weighing 450 kg.

Durok meat has layers of fat, which makes the Durok steak tender and juicy. It is this quality of meat that made the breed so popular, first in the United States, and then throughout the world.

Features of the diet

Like all representatives of its species, the Duroc is omnivorous. But due to the rapid growth of muscle mass, piglets need high-protein food. For fattening piglets, you can use:

Unafraid of the GMO acronym can also produce soy. Instead of meat, it is better to give piglets blood or meat and bone meal. Fishmeal is usually found in regions where fish processing plants are built. It is also suitable for fattening pigs. It is also possible to agree on the purchase of fish-processing waste at a symbolic price.

Important! If you feed the pigs with raw fish, the meat will have a fishy smell and taste.

In addition, if possible, feed beets, overripe cucumbers, carrots and zucchini are included in the diet of pigs. People no longer consume such stale and sinewy vegetables, so they can be bought at half the price. And the pigs will be happy. 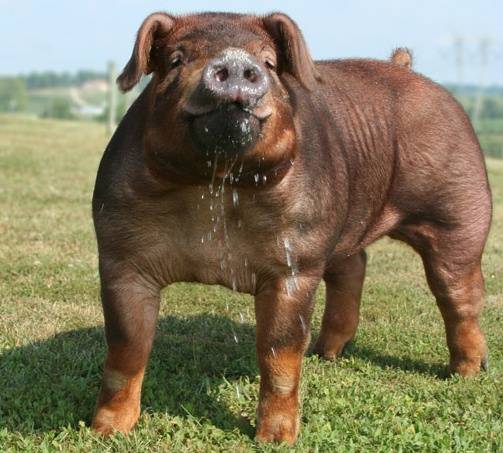 Silage recommended on many sites is not recommended. The silage harvesting technology provides for fermentation, as a result of which an excess of acid appears in the feed. An increase in acidity in the stomach impairs the absorption of other feeds. In addition, silage is prone to rapid souring.

Duroc's piglets reach a slaughter weight of 100 kg by six months of age. If the pigs were raised not for the tribe, but for slaughter, then it makes no sense to keep them longer.

Since these pigs were bred in the relatively warm United States, they are not particularly frost-resistant, requiring warm housing in winter. At the same time, the duroks are demanding on the conditions of detention, in addition to heat, they need fresh air, coolness and the absence of drafts. It is quite problematic to comply with all conditions without climate control installations. Perhaps that is why, with all their merits, pigs of this breed did not become widespread in private farms, remaining the genetic material for the production of meat crosses on pig farms.

Important! If the conditions of detention are not observed, the Durocs are prone to rhinitis and conjunctivitis.

In this case, the owners have to master the profession of a veterinarian, making inhalations for internal cleansing of the patches of mucus and pus and instilling antibiotic drops into the nose of the piglets.But for these procedures, piglets still need to be able to catch.

With the onset of warm days, pigs are recommended to be kept outdoors.

Indoors, the pens are arranged based on the orientation of the content and the size of the pig. For an individual fed for meat, the size of the pen should be minimal, or they are all contained in a common space, the size of which depends on the number of pigs fed. If you plan to breed duroks, then the breeding boars and pregnant queens are assigned separate boars with an area of ​​4-5 m². 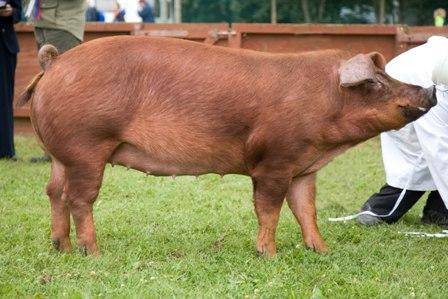 Straw or hay is used as bedding. It is better not to use wooden flooring as a floor. If the pig does not have a separate corner for the toilet, then urine will flow under the boards and decompose there. As a result, the expression "stinks like in a pigsty" will become not figurative at all.

It is better to make the floor asphalt or concrete and cover it with a thick layer of straw. Pig farms use special metal flooring with holes. But the farm maintains a stable temperature of about 25 ° C.

It is better to take pigs for breeding on specialized breeding farms. But even here you need to be well versed in this breed. In any breeding breeding, there is always a certain percentage of animals to be culled. When raising pigs for meat, you can not attach importance to the fact that the animal is culled from breeding. But if you want to breed high-quality breeding pigs, you need to look well at what they are trying to sell you from the farm.

Pedigree pigs of the Duroc breed:

Pigs are distinguished by good fertility, bringing 9-11 piglets per farrowing. Sows of this breed are good mothers, not causing trouble to their owners. 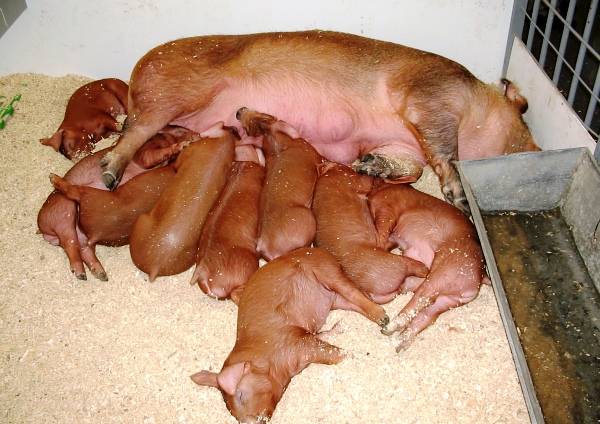 Important! During farrowing, the room temperature should be at least 25 ° C.

Piglets gain 2.5 kg by two weeks. They can already weigh 5-6 kg per month.

Monthly piglets of the Duroc breed:

Reviews from owners of pigs of the Duroc breed

Elena Voronova, Yegoryevsk
I started the Durok breed because of the suit and for the peasants for barbecue. I'm a vegan myself, so I don't eat meat at all. But try not to feed your husband. I chose this particular breed so that there was less fat. I do not know what "average size" they are, but real monsters have grown up. The slaughter question was pushed onto her husband, as the main consumer of what would come out of this pig. I myself think where I will put everything. Well, and I feel sorry for them. I love animals. And these are also very affectionate, albeit hefty.
Valentina Tretyakova, p. Sadovoe
When I moved to the village, I decided to have pigs with goats and lambs. I was offered to start with Vietnamese, as the most unpretentious, but in search of a pig I saw a Duroc on the Internet and fell in love. I looked around, did not find it. It turned out that this breed is relatively uncommon in Russia. And with breeding farms it is really bad. Or I was looking in the wrong place. But I found it only in Kherson, Ukraine. Transporting piglets to Russia by partisan paths is a separate epic. But she brought it and even put it on record. Our climate is similar to the American one, so the Durocs don't give me much trouble. And now I sell breeding piglets to everyone. 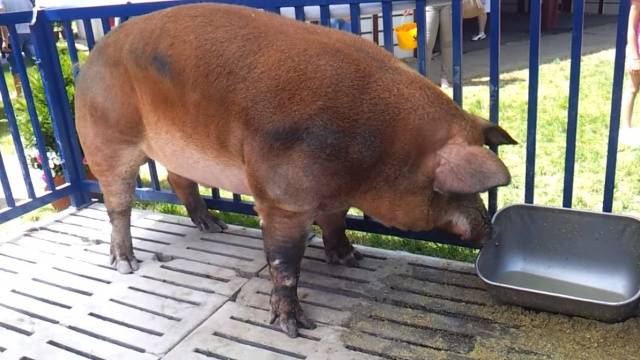 Duroc is a good breed for those who do not like bacon and do not want to cut it off the carcass. High-quality and tasty meat compensates for any craving for bacon. If it were not for the difficulties with the content, Duroc would be an excellent choice for beginners, since the main problem is still not the issues of content, but the aggression of pigs towards humans. Duroc does not have this vice.

Recommended entries
Pigs Landrace: description, maintenance and feeding
Pig diseases
Pietrain - a breed of pigs: characteristics, reviews
Pig erysipelas
The shank is what part of the pig (pork carcass)
Piglets cough: reasons
Pig feed yeast
BMVD for pigs
The piglet does not stand on its hind legs: what to do
Give feedback Cancel reply
Recommended entries
Pig diseases
What is the meat yield of pigs (percentage)
Pig erysipelas
How to get a pig out of a hunt and what needs to be done to make a pig come into the hunt