Eye diseases in rabbits, if they are not a symptom of an infectious disease, are no different from eye diseases in other mammals, including humans. Up to the point that the eye of a rabbit can be examined and diagnosed by an ophthalmologist.

If conjunctivitis is a symptom of an infectious disease in a rabbit, it is pointless to treat it without eliminating the underlying cause. In this case, first of all, the disease is treated, and in relation to the eyes, symptomatic treatment is used, aimed at alleviating the well-being of the rabbit.

Diseases of rabbits related only to the eyes are most often hereditary in nature. May be the result of mechanical damage, chemical irritation of the eyes or dacryocystitis, which usually occurs as a result of a congenital malposition of the molars of a rabbit. 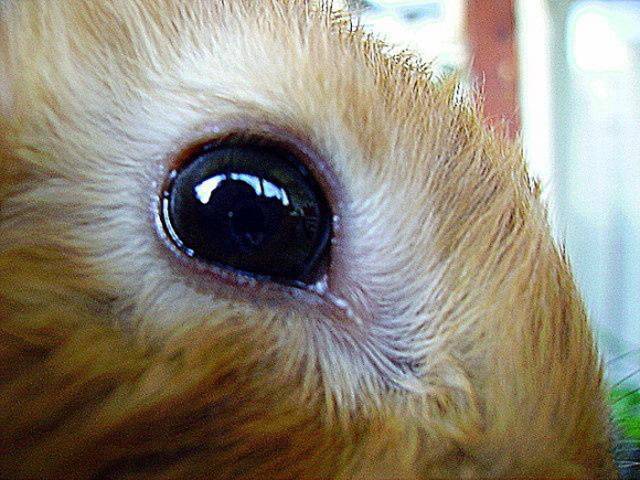 Diseases of the eyes of an infectious nature should be considered in combination with the treatment of the underlying disease in a rabbit, so there is no point in dwelling on them in this case.

Non-infectious ophthalmic diseases in rabbits are generally treated in the same way as other animals. The only difference is in size.

Mechanical damage to the eyes of rabbits occurs as a result of fights between animals, prickling of the eyes with seninki during feeding, bruises, if, when frightened, the rabbit stumbles upon the corner of the feeder or other object.

Such damage usually goes away on its own, although the eye can look creepy. Often in this case, there is profuse lacrimation from the eye. The eye is closed. There may be swelling of the eyelids.

To prevent secondary infection, in this case, you can drop drops with a broad-spectrum antibiotic into the rabbit's eye.

Chemical irritation of the eyes in a rabbit can only be caused by ammonia fumes from decaying urine in an uncleaned cage. In this case, not medical, but sanitary measures are needed.

If the eyes are clogged with earth or lime from the walls, the eyes of the rabbit are washed with saline. If the rabbit's eyes were rinsed almost immediately after clogging, then no further action is required. Otherwise, drops with an antibiotic are instilled.

A rabbit's eyes may begin to watery due to an allergic reaction. In this case, no eye treatment will help until the allergen is identified and eliminated. 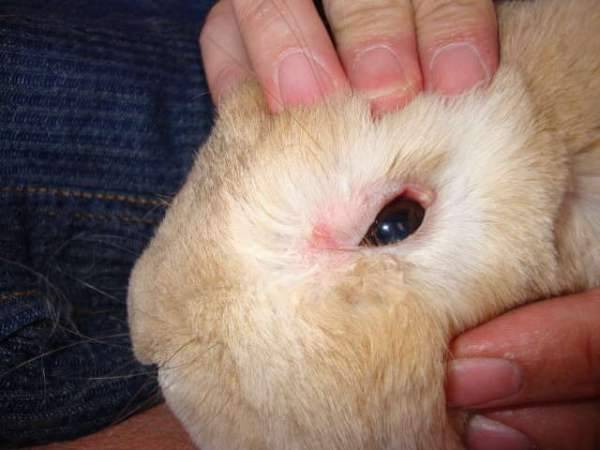 Important! Often an allergic reaction occurs when the hay is contaminated with mold.

This hay is often called dusty due to the fact that when shaken into the air, a lot of dust rises, which is actually mold spores. These same spores often cause respiratory tract damage in rabbits.

To eliminate the problem and prevent an allergic reaction in a rabbit, such hay will have to be shed for at least 10 minutes.

The situation is worse if eye diseases in rabbits are caused by hereditary factors or are a complication after other diseases.

An eye disease that is congenital in nature, as it occurs with abnormal growth of molars, which change the shape of the nasolacrimal canal. As a result, at first, the eye begins to water, since the discharge of the lacrimal gland does not have the opportunity to get through the nasolacrimal canal into the nose. The blocked channel becomes inflamed. Later, when a secondary infection sits on the inflamed surface, the outflows become purulent.

Treatment is possible only by surgery, as it is necessary to remove improperly growing teeth. The operation is performed in a veterinary clinic. Accordingly, the treatment of dacryocystitis is possible only for decorative rabbits... It is easier for a farmer to kill such a rabbit.

After removing the incorrectly growing tooth, the nasolacrimal canal is cleaned. In advanced cases, drainage is required. Since advanced cases automatically imply suppuration and infection of the canal, antibiotic eye drops are used to eliminate the secondary infection.

In the photo, the drainage of the nasolacrimal canal, popularly called the "obstruction". 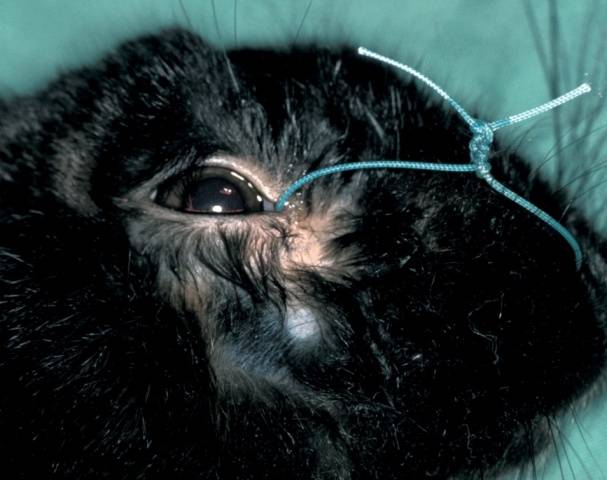 The principle of operation is simple: periodically it is necessary to pull the cord back and forth to clear the channel and get rid of dried mucus.

Involution of the eyelids

The scientific name is "entropium". It arises as a complication after keratitis. Moreover, the entropium itself can be the cause of secondary keratitis. Other causes of entropium: cartilage deformation, prolonged conjunctivitis, hereditary predisposition.

Comment! Hereditary bloat usually suffers rex rabbits due to the same mutation that provided them with their beautiful plush skin.

Twisting of the eyelids in a rabbit can also occur with a convulsive contraction of the circular muscle of the eye.

When the eyelids twist, the eyelashes get caught between the eyelid and the cornea of ​​the eye, damaging it and causing keratitis. If you run the problem, the cornea may be perforated.

The bloat is eliminated only by surgery. If eye drops do not help the rabbit with conjunctivitis for a long time and the eye continues to fester, you need to consult a doctor. It is possible that this is not a matter of ordinary conjunctivitis. 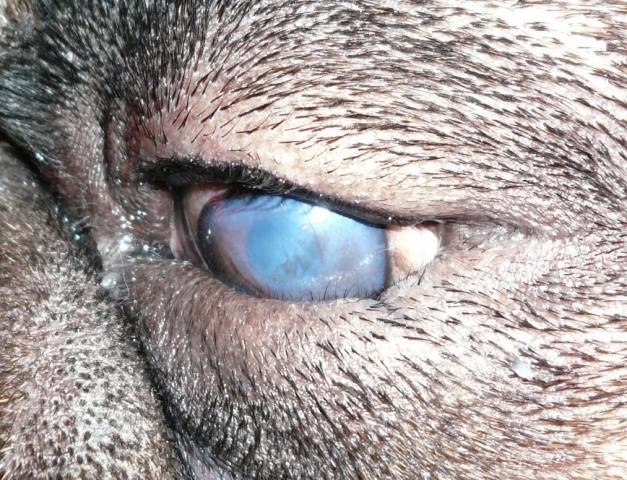 Eversion of the eyelids

The reasons are almost the same as for volvulus, only instead of the convulsive contraction of the muscle, one of the reasons is paralysis of the facial nerve.

Inversion of the eyelids is characterized by drooping of the eyelid and its separation from the eyeball. As a hereditary factor, it is often found in dogs with a raw constitution (mastiffs), but in rabbits this phenomenon is very rare and should not be allowed in the breeding of such rabbits.

Much more often, eversion of the eyelids in rabbits occurs due to fights or as a complication after a disease.

Eversion of the eyelids is also eliminated surgically. 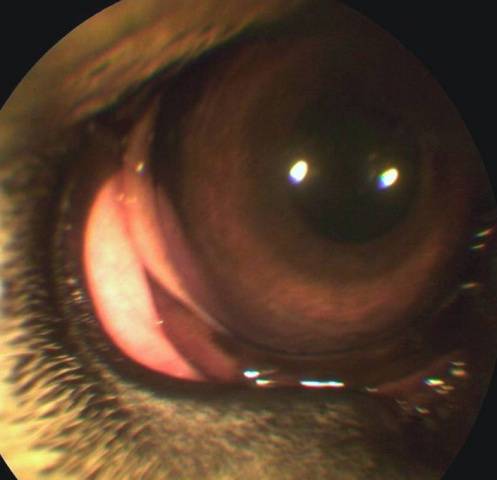 The last of the diseases related to the eyelids is blepharitis.

This is an inflammation of the eyelids, which can lead to eversion or twisting of the eyelids. Blepharitis can be superficial or deep. The reason for the appearance of blepharitis in both cases is:

It is possible to distinguish between superficial and deep blepharitis by external signs. 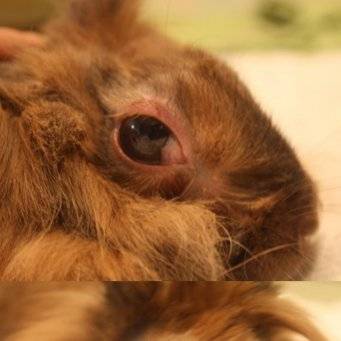 Deep blepharitis has no stages. This is an extensive purulent inflammation of the tissue of the eyelids, without the main localization of the abscess in one place. The eyelids are very swollen, painful. The eye is closed. Pus flows from the inner corner of the eye. The conjunctiva swells and protrudes into the palpebral fissure.

For superficial blepharitis, you can use lotions from a 1% solution of baking soda. The edges of the eyelids are treated with antimicrobial ointments: furacilin or svlfacil sodium.

Important! There is a recommendation to cauterize the ulcers with a solution of iodine or brilliant green, but this is very undesirable, since the drugs can get on the cornea of ​​the eye, especially if the rabbit twitches.

Antibiotics and sulfonamides are used as a general remedy. The same drugs are used in the treatment of deep blepharitis. If localized abscesses appear, they are opened.

The general name for inflammatory processes in the mucous membrane between the eyelid and the eyeball.

Conjunctivitis in rabbits can be caused by mechanical and chemical factors. Mechanical irritation refers to eye irritation with dust or a particle of hay that has fallen on the mucous membrane. To chemical: cauterizing agents, disinfectants, lime dust, acids, alkali, ammonia in poorly ventilated rooms. 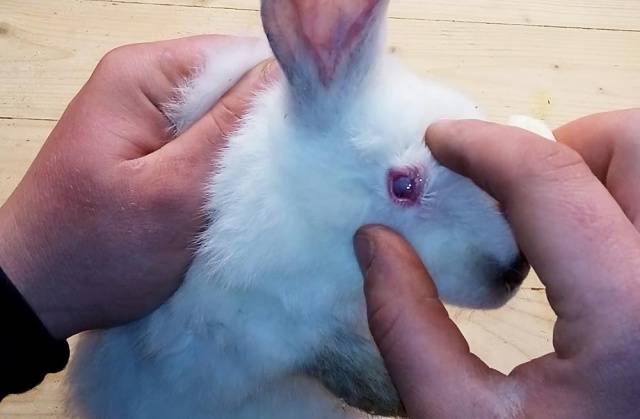 The symptoms of conjunctivitis are the same:

Discharge from the eyes with conjunctivitis can be clear or purulent. The latter usually occurs either with an underlying infectious disease, or with advanced non-infectious conjunctivitis.

There are 5 forms of conjunctivitis:

Often conjunctivitis is provoked by pathogenic microflora "addicted" to damage to the mucous membrane or taking advantage of the weakening of the rabbit's immunity. 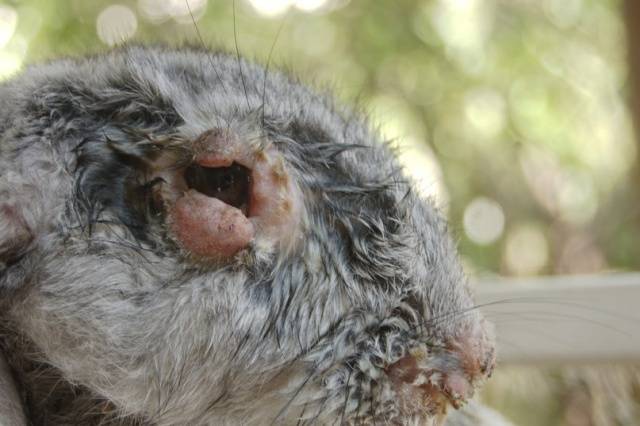 Important! The treatment of follicular and fibrinous conjunctivitis should be dealt with by a veterinarian, since certain surgical procedures are required.

Inflammation of the cornea of ​​the eyeball. The causes of the disease are the same as for conjunctivitis.

The main symptom of keratitis is corneal opacity. With purulent keratitis, the opacity will be yellow. In addition to opacity, photophobia, detached epithelial particles, and corneal invasion by additional blood vessels are present.

Eliminate the cause and prescribe eye ointments or drops with antibiotics.

Ulcers occur with glaucoma, lack of tear fluid with blockage of the nasolacrimal canal, damage to the facial nerve.

An ulcer is a perforation of the cornea of ​​the eye. Surgery to remove the eyeball is usually required. 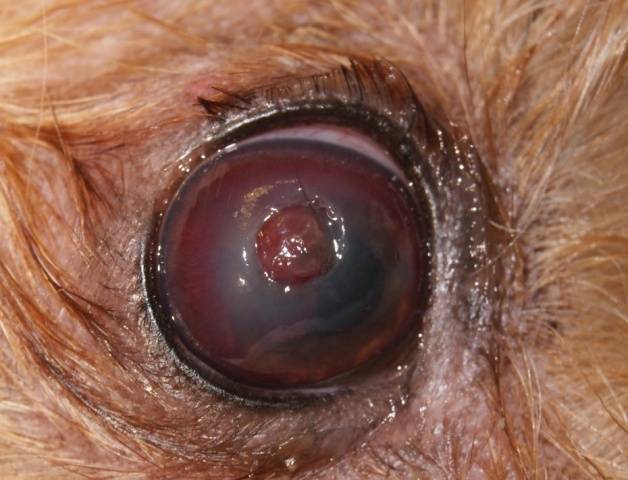 This is usually a concomitant underlying disease. It occurs with advanced keratitis or corneal ulcers, as well as with infectious diseases. Essentially, uveitis is an inflammation of the choroid. The underlying disease is treated. 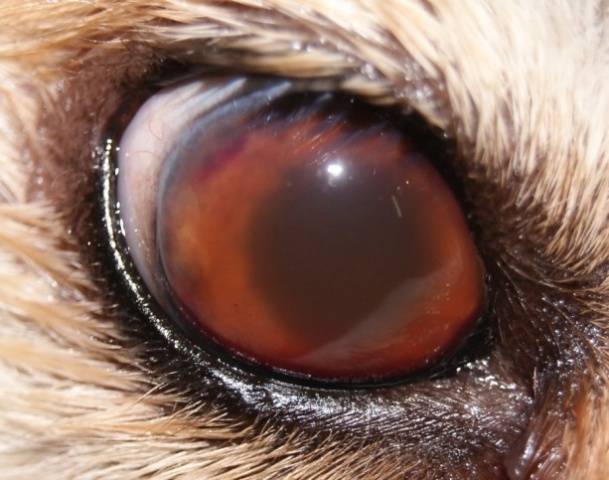