Diseases in many animals are very similar to known human diseases. There are overlaps between mammals in the structure of tissues, joints, muscles. The device of the joints also has a similarity, and therefore the pathologies are often the same. Arthritis in cattle is common and for various reasons. To effectively treat the disease, it is necessary to detect it in cattle in time and begin to act, and it is better to prevent the formation of painful processes in the joint. 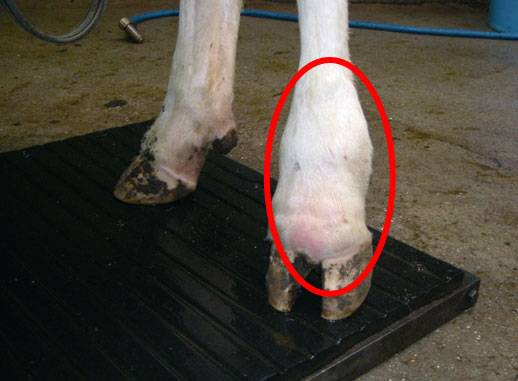 What is bovine arthritis

With arthritis, inflammation of the joints in cattle occurs. The animal limps at first barely noticeable, and with the course of the disease it becomes stronger. The affected areas swell and severe lameness occurs at a later stage. The animal loses its productivity as well as weight. This is an acute inflammation of the joint, which occurs due to purulent infections.

Veterinarians distinguish not one, but a whole group of diseases, which are united by the term "arthritis". The nature of the disease can be dystrophic, mixed, and also inflammatory. Also, the disease is divided into primary, when the infection occurs directly in the joint, or secondary, when the infection enters the joint from neighboring tissues, as a result of abscesses, osteomyelitis.

Important! The disease also enters the hematogenous or lymphogenous pathways.

The method of treatment depends on the classification of the disease, as well as the future prognosis for cattle. It is important to distinguish the just beginning process of joint inflammation from severe pathology that can deprive an animal of a limb and greatly reduce the productivity of livestock. Bovine arthritis is classified into two types:

A purulent variety occurs only after open wounds and dislocations in the joints. More often accompanied by a temperature and a severely depressed state of the animal. At the same time, the aseptic version still has an acute and chronic form, although in terms of symptoms it is similar to purulent arthritis.

As a result, growths, ecostoses, osteophytes can occur. With purulent arthritis, heart palpitations are characteristic, the temperature rises.

Attention! The general condition is worse with purulent arthritis. The animal can completely refuse to eat, and dairy cows decrease their performance several times, which negatively affects the productivity of the entire herd.

Purulent arthritis affects the largest joints of the animal, for example, the elbow, hip, and knee. Small joints are not subject to such destructive processes.

The reasons for the development of the disease

The main causes of the disease can be as follows:

The natural aging process also becomes the cause of arthritis in cattle. Failure to comply with sanitary and hygienic standards for keeping cattle, both in private farms and in large cowsheds, can provoke the disease. Therefore, it is necessary to comply with all the standards prescribed by the sanitary service, as well as the cleanliness in the barn, and ensure that the animals have sufficient fresh air. Then there is no need to fear for the health of the joints of calves, adult cows and bulls.Trauma treatment must be rational and professional.

Symptoms of arthritis in cattle

The main symptoms of arthritis in cattle of any kind are:

If you start purulent arthritis, then the animal from the herd must be discarded, since the disease cannot be treated at this stage in cattle. Therefore, it is important to start treatment at an early stage. With a through lesion, a clear fluid with small impurities of blood, called an articular fluid, flows out of the wound.

Purulent and aseptic arthritis are similar in symptoms. Modern diagnostic methods will help to more accurately determine the disease. But before proceeding with analyzes and instrumental diagnostics, the animal must be examined by a veterinarian.

The first of the instrumental methods is X-ray. Arthropuncture is often used, when fluid is taken from the joint for analysis and sent to the laboratory for analysis. They study the bacteriological composition and establish an accurate diagnosis. So you can define rheumatism, tuberculosis, various tumors.

A specialist can evaluate the analysis indicators. For example, with capsular phlegnoma, the condition of the animal deteriorates sharply; when taking analyzes, the leukocyte counts are shifted to the left. In a calm state, the cow holds the limb in suspension in a bent form.

With para-articular phlegnoma, the animal is depressed until the abscess is opened. The cow often lies, sometimes completely refuses to feed.

The general condition of the animal, which refuses to feed during the period of illness, is also assessed.

The main method of treatment, which proved to be effective, is a complex one. First of all, it is important to provide peace to the joint and initially cold. Then - heat treatment. You need to use other methods of treatment:

Vishnevsky's ointment also helps. Boric acid is also used to treat cattle wounds. After opening the joint, it is recommended to treat the wound cavity with antiseptic powders.

The prognosis for arthritis in cattle depends on the stage at which the therapeutic measures began. The sooner the owner notices the problem and calls in a specialist, the more favorable the prognosis will be.

In the chronic course of the disease, the prognosis is cautious, since it is most often difficult to completely save the damaged limb in cattle. 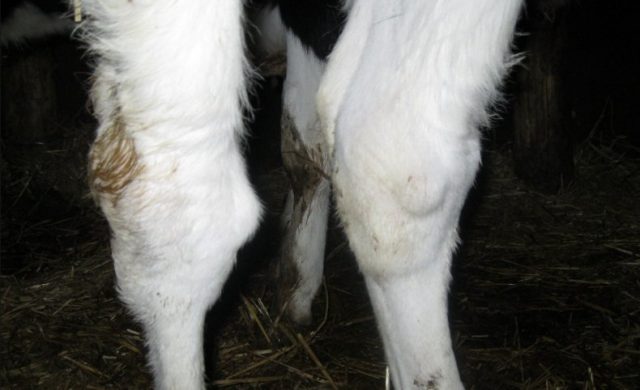 If the disease is neglected, then the animal has to be discarded, regardless of its breeding value, and sent for slaughter. Therefore, it is so important not to start the disease, but to start timely treatment. Otherwise, complications may develop, such as:

If the dislocation in cattle is open, then it cannot be treated.

With capsular phlegnoma, the prognosis for the animal is dubious, and in the presence of purulent osteoarthritis, it is often unfavorable.

Any disease is easier to prevent than to cure. Therefore, timely prevention of arthritis in cattle is very important. If all preventive measures are followed, the owner will be able to protect his cattle from any senile disease and complications, including from cattle arthritis.

First of all, it is necessary to monitor the proper nutrition of cows and calves so that there is no deficiency in vitamins and minerals. It is important to properly organize the keeping of livestock in the winter. If there are few sunny days, you can provide ultraviolet light with artificial lamps that are mounted in the barn.

Attention! In the summer, prevention consists in keeping the cattle in the fresh air as much as possible. In the open sun, the risk of arthritis in cattle is much lower.

Regardless of where the cattle are kept: in a private backyard or on a large farm, it is important to comply with sanitary and hygienic standards.

Arthritis in cattle is a complex disease that affects the joints. If the case is neglected, it leads to the loss of the animal and its culling. Arthritis in cattle is of primary and secondary nature, can occur as an independent disease and as a complication after trauma. Therefore, it is important to carry out primary surgical measures for trauma to the limbs of animals.

Recommended entries
Cow of the Yaroslavl breed: characteristics, photos, reviews
A cow has a corpus luteum: how to treat
Uterine prolapse in a cow before and after calving: treatment, what to do
How to give a cow a shot
How long before calving does the cow pour the udder
Cattle meat yield
Vitamins for cows before calving and after
Viral diarrhea in calves and cows
Taking blood from cattle from the tail vein and jugular
Give feedback Cancel reply
Lunar
calendar 2021
January February March April May June July August September October November December
Recommended entries
Cattle meat yield
Bicillin for cows
Nicknames of bulls
Compound feed for calves and cows